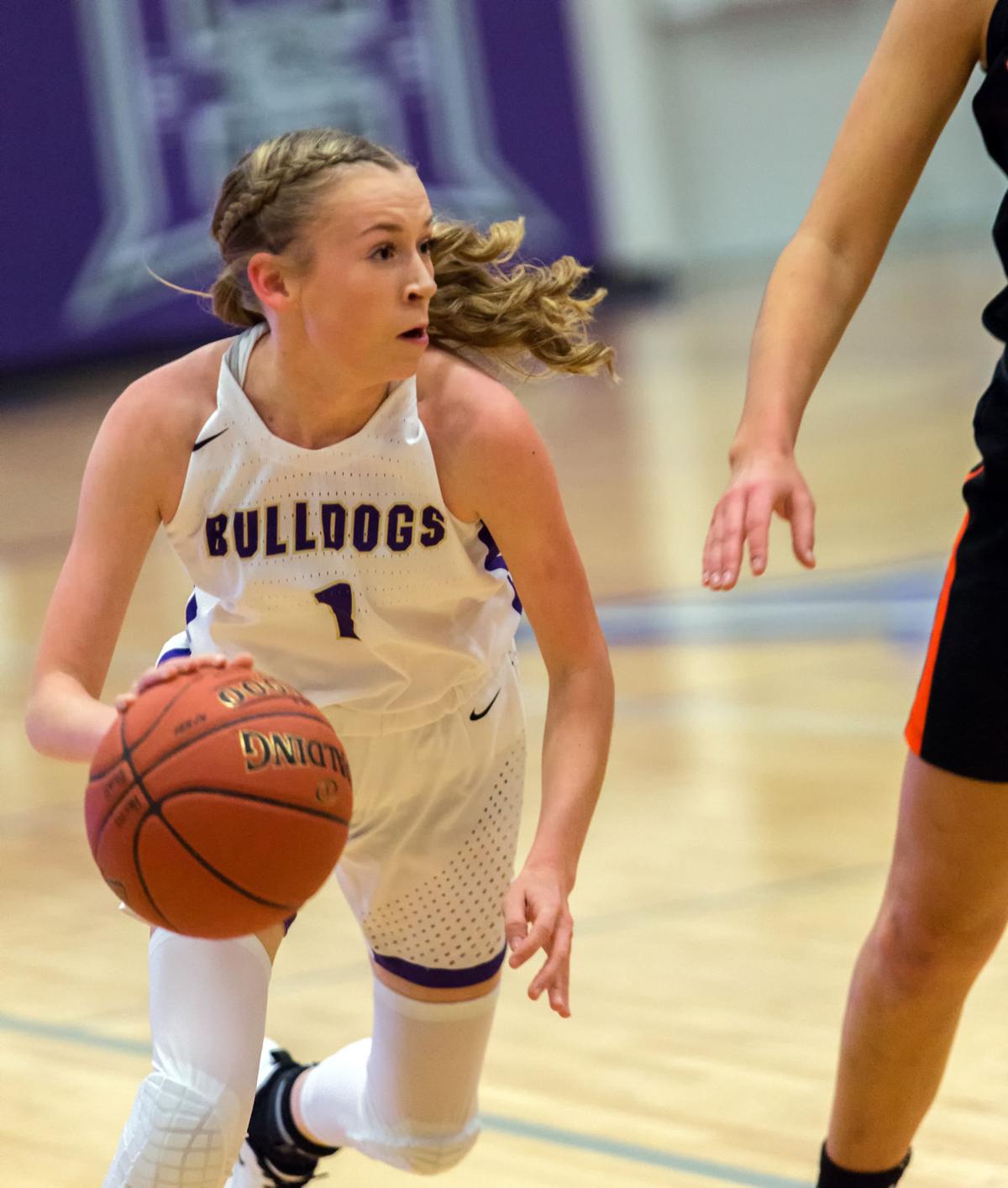 Hermiston’s Katelyn Heideman brings the ball down the court during Saturday’s game against the Kennewick Lions. 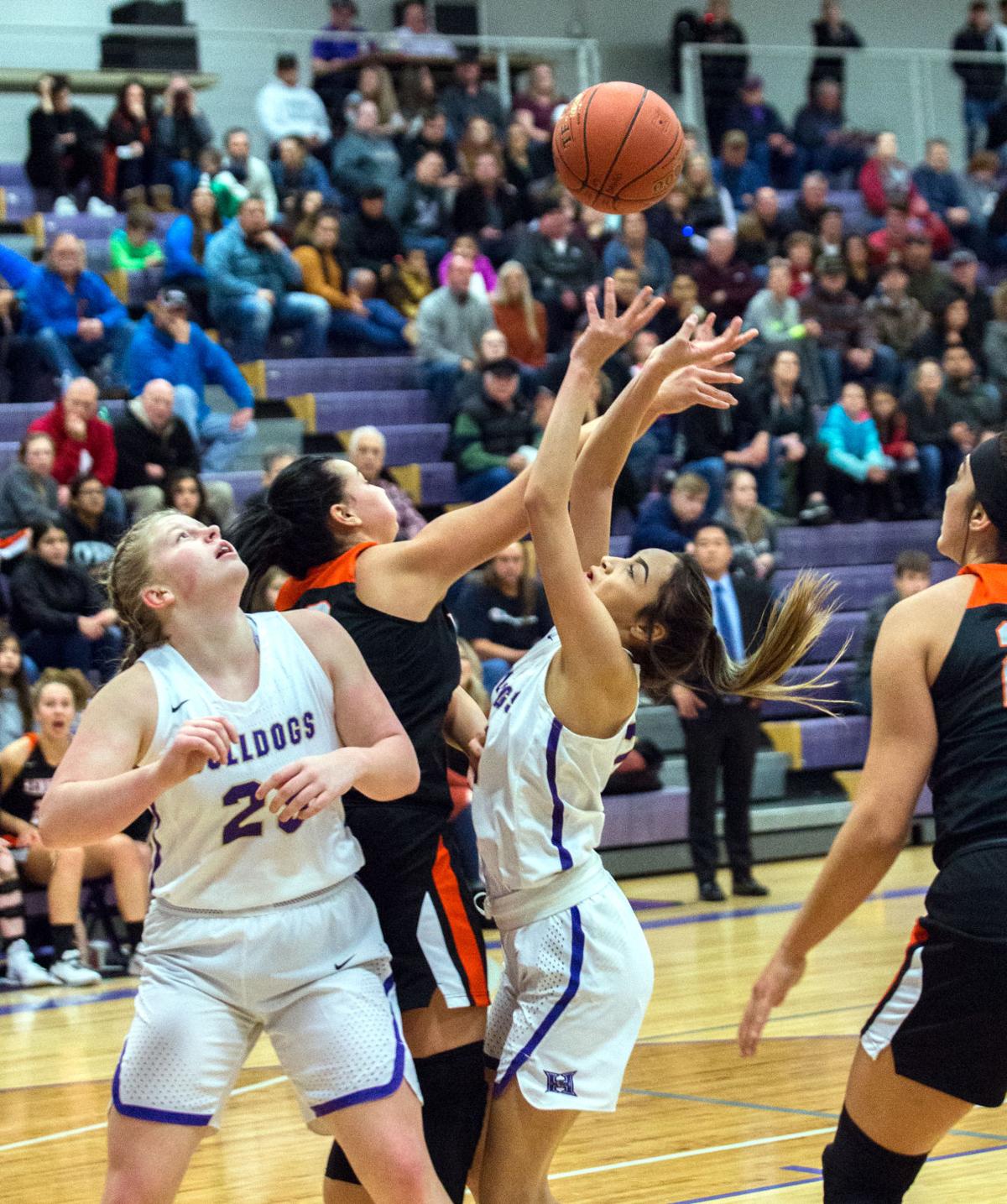 Hermiston’s Mia Hernandez and an unidentified Kennewick player battle for the ball during Saturday’s game.

Hermiston’s Katelyn Heideman brings the ball down the court during Saturday’s game against the Kennewick Lions.

Hermiston’s Mia Hernandez and an unidentified Kennewick player battle for the ball during Saturday’s game.

Hermiston was hot from the 3-point line in the second half, but it was a lackluster first half that put the Bulldogs behind the 8-ball early.

Avery Fiander scored a career-high 24 points — 16 in the first half — to lead the Lions to a 59-48 Mid-Columbia Conference victory Saturday night at the Dawg House.

“We didn’t play the best team defense, that’s what it came down to,” said Hermiston coach Malloree Moss, whose team fell to 0-2 in MCC play. “They hit their shots. They are a tough team, and we knew that. They hit the boards hard and we didn’t do what we needed to do.”

The Lions used their size to dominate the boards, and took advantage of uncontested shots in the paint.

The Bulldogs came out and took a 5-2 lead, and led 8-6 before the Lions took control of the game for good on a deep 3-pointer from the right wing by MeiLani McBee.

Hermiston’s Jazlyn Romero scored seven of her 11 points in the first quarter.

Fiander scored 10 of her points in the second quarter as the Lions went on an 18-5 run to take a commanding 34-15 lead at the half.

Hermiston pulled within 36-21 early in the third quarter courtesy of a pair of 3-pointers by Makaylee Young.

Kennewick enjoyed a 45-25 lead at the end of three quarters, but the Bulldogs never backed down. They went on a 23-14 run in the fourth quarter to make things interesting.

Hermiston scored 11 of the game’s final 13 points to keep the score respectable.

“We have a lot of heart,” Moss said. “We turned it on a little too late. As a coach, it’s good to see them playing until the end.”

In a battle of the Bulldogs, Pasco made a 20-7 run in the second quarter to take down Hermiston early and hand them a 54-45 MCC loss on Friday.

Hermiston took a 24-11 lead by the end of the first quarter, bolstered by Katelyn Heideman’s four 3-pointers, but the game got away from them after the opening eight minutes.

“We came out hot,” Moss said. “We played hard team defense. But we let ‘em back into the game in the second half. We went cold.”

Romero scored two points at the line in the third quarter — the only points Hermiston would record until the final eight minutes.

Hermiston outscored Pasco 12-8 in the fourth quarter, but could not overcome its early deficit.

Heideman led the Hermiston Bulldogs with a team-best 16 points on the night.