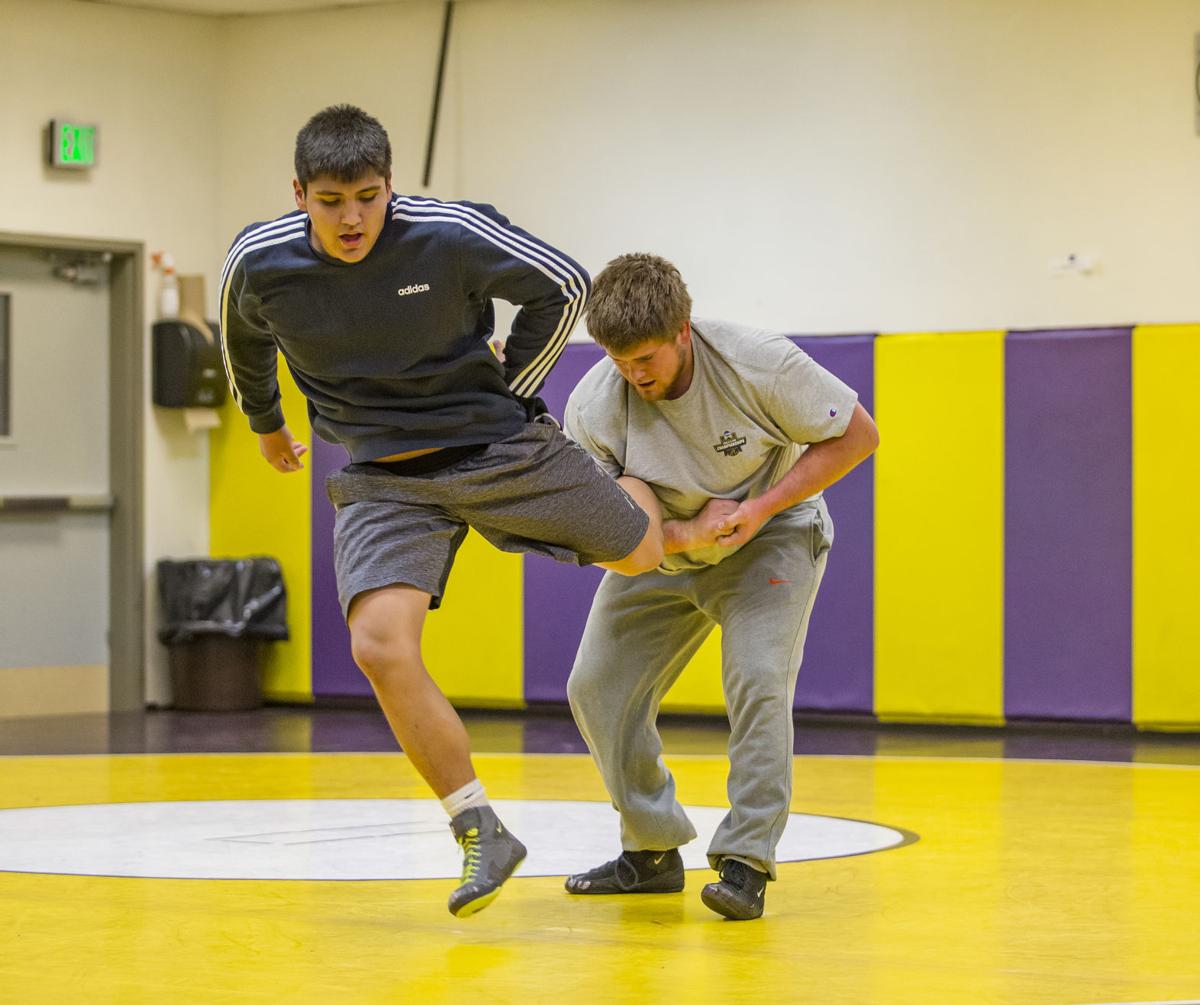 Bob Coleman, right, grapples with Hermiston High School’s Samuel Cadenas, 16, during wrestling practice at the high school on Thursday afternoon. Coleman, a 2016 state champion at Hermiston, and a 2019 Pac-12 champ at Oregon State, helps out his former team when he can. 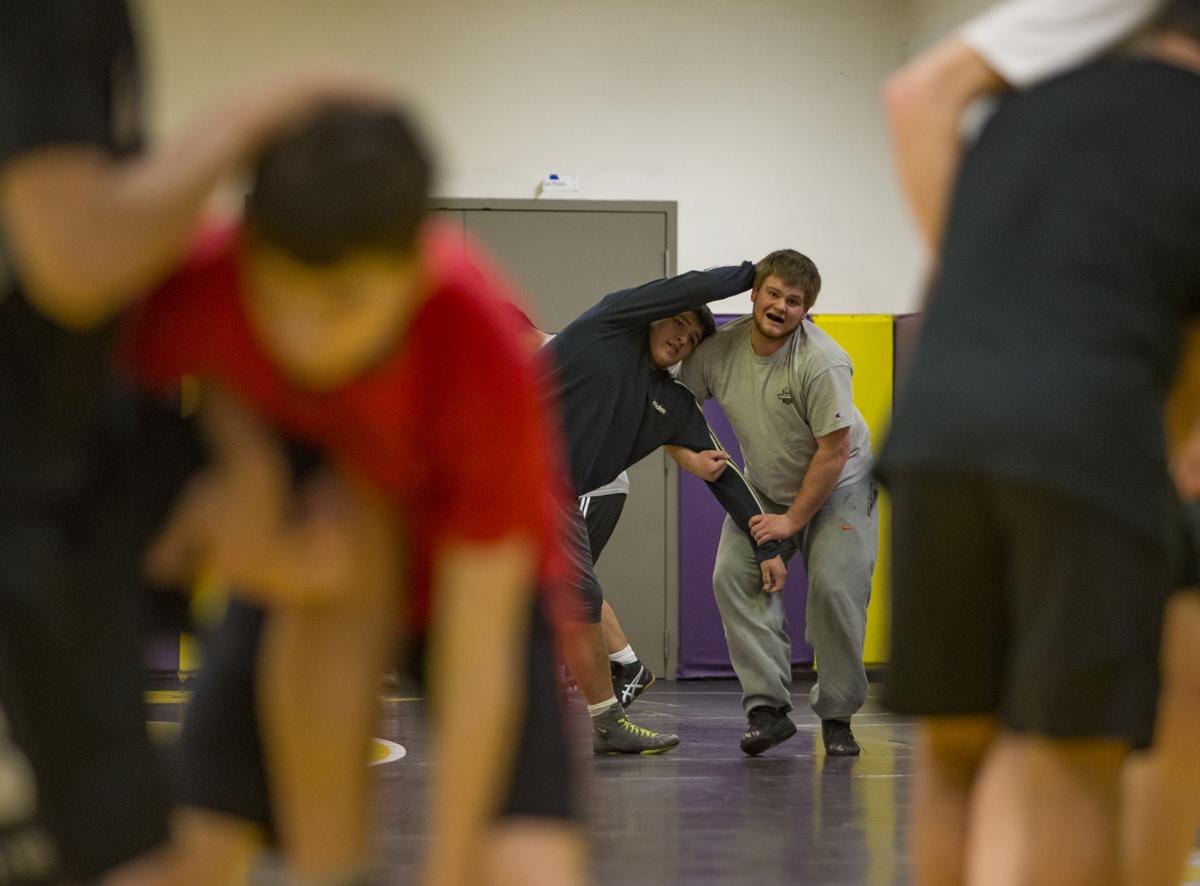 Bob Coleman, right, grapples with Hermiston High School’s Samuel Cadenas, 16, during wrestling practice at the high school on Thursday afternoon. Coleman, a 2016 state champion at Hermiston, and a 2019 Pac-12 champ at Oregon State, helps out his former team when he can.

Bob Coleman is still trying to figure out which is harder — college wrestling or farming.

With his agricultural business degree in hand, Coleman graduated from Oregon State University in the spring, and has been helping with the family farm since his return to Hermiston.

When farming becomes frustrating, as it did earlier this week, Coleman can work out his frustrations with his former high school wrestling team.

“I think that is one of the things we hope for,” Hermiston coach Kyle Larson said of former wrestlers coming back to help out. “Maybe an expectation. These guys go on to the next level, then come back and pass it back to the next generation. We have had a lot of phenomenal alumni support.”

Coleman won the Pac-12 184-pound title for Oregon State University last March, and went to the NCAA Championships, but the 2016 Hermiston graduate said he did not start the sport as a natural.

“I didn’t just magically get good at wrestling,” said Coleman, who won the Oregon 5A 182-pound state title in 2016. “It took a lot of people to help me. I’m just paying it forward. Hermiston has a village when it comes to wrestling.”

“It’s funny,” Coleman said. “People know I won a Pac-12 title, but some of these kids think I won worlds. College wrestling is a dogfight every day at practice. You don’t know if you will come out with a bruised face or a broken leg. Everyone has to pay their dues.”

If Coleman can teach the young Bulldogs a thing or two, that’s great, but part of him still craves the sport.

“You miss aspects of wrestling, but this allows you to go back and help someone else miss it later on,” he said.

Coleman, who could have wrestled one more year at OSU, decided to take his degree and go to work.

“Academically, when I was at Hermiston, I got about a third of my credits before I went to college,” said Coleman, who was named to the Pac-12 All-Academic second team in March. “I accomplished more than I ever thought I would in wrestling. I wasn’t just going to stay to wrestle. This gives me the opportunity to stay involved in the sport. As long as my body holds out, I will. When it won’t, I will help with the little kids.”

Larson, who also helped with the program before taking over as coach, appreciates whatever help Coleman and other alumni can offer.

“Anytime Bob touches anyone in the room, and wrestles with them, they are going to get better,” Larson said. “Sometimes it’s hard to get four coaches, let alone guys like Bob who come in. It’s a steal.”

The Bulldogs also get an occasional appearance in the room by two-time state champion Brent Parks, who now is a construction/woodshop teacher at Hermiston High.

“He is tougher than nails,” Larson said of Parks. “He’s another alumni who helps us out. My brother Jeremy used to come in too, but his (dental) practice is pretty busy.”