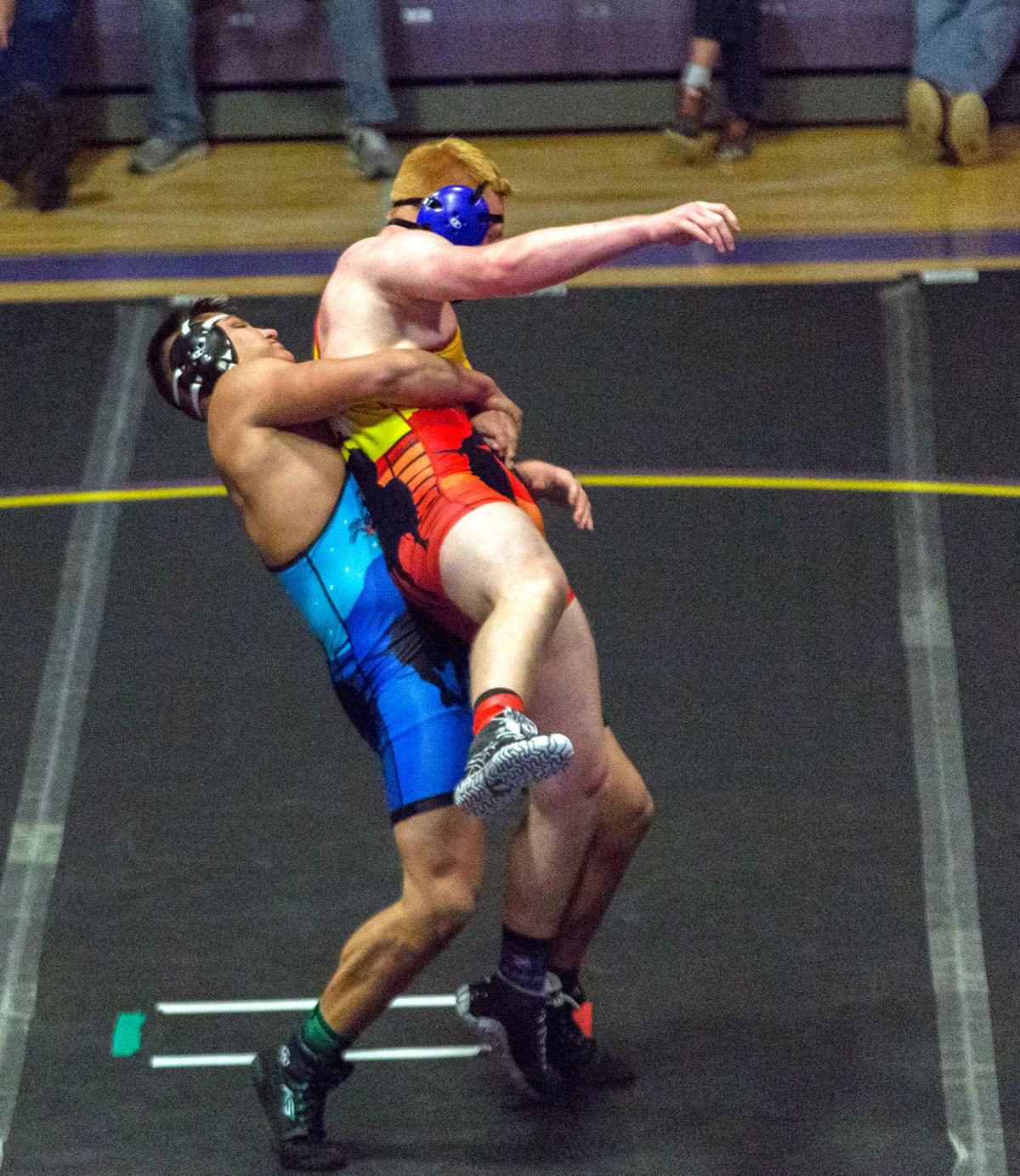 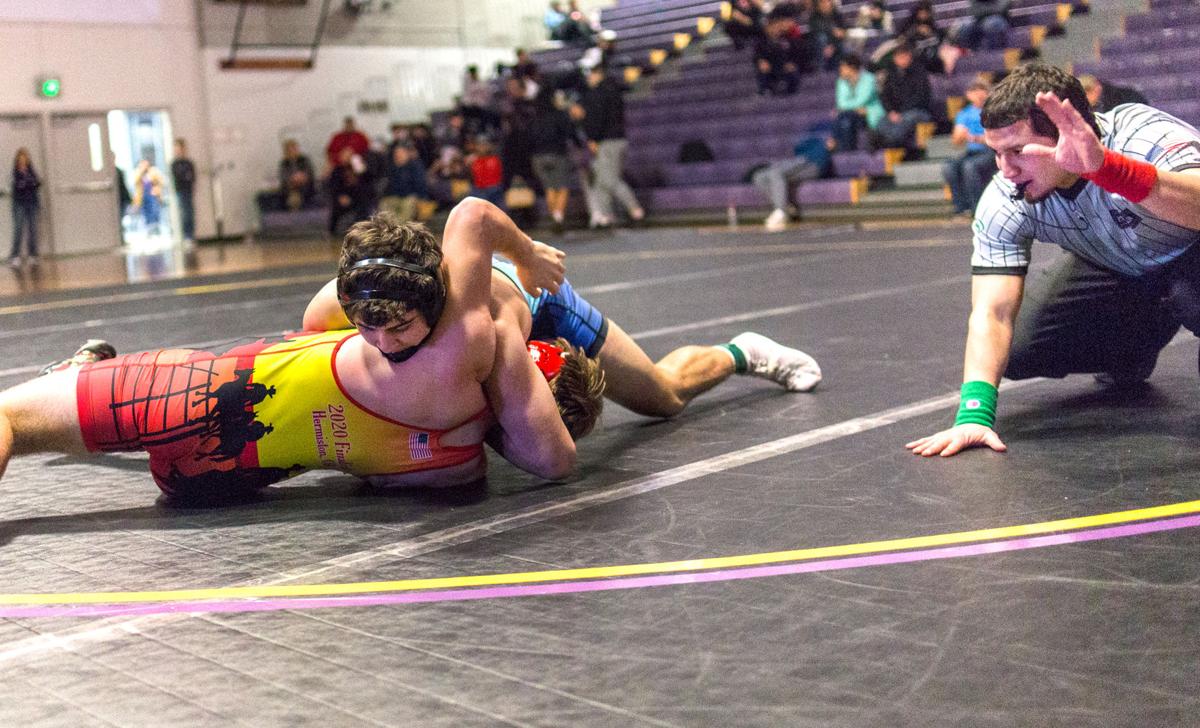 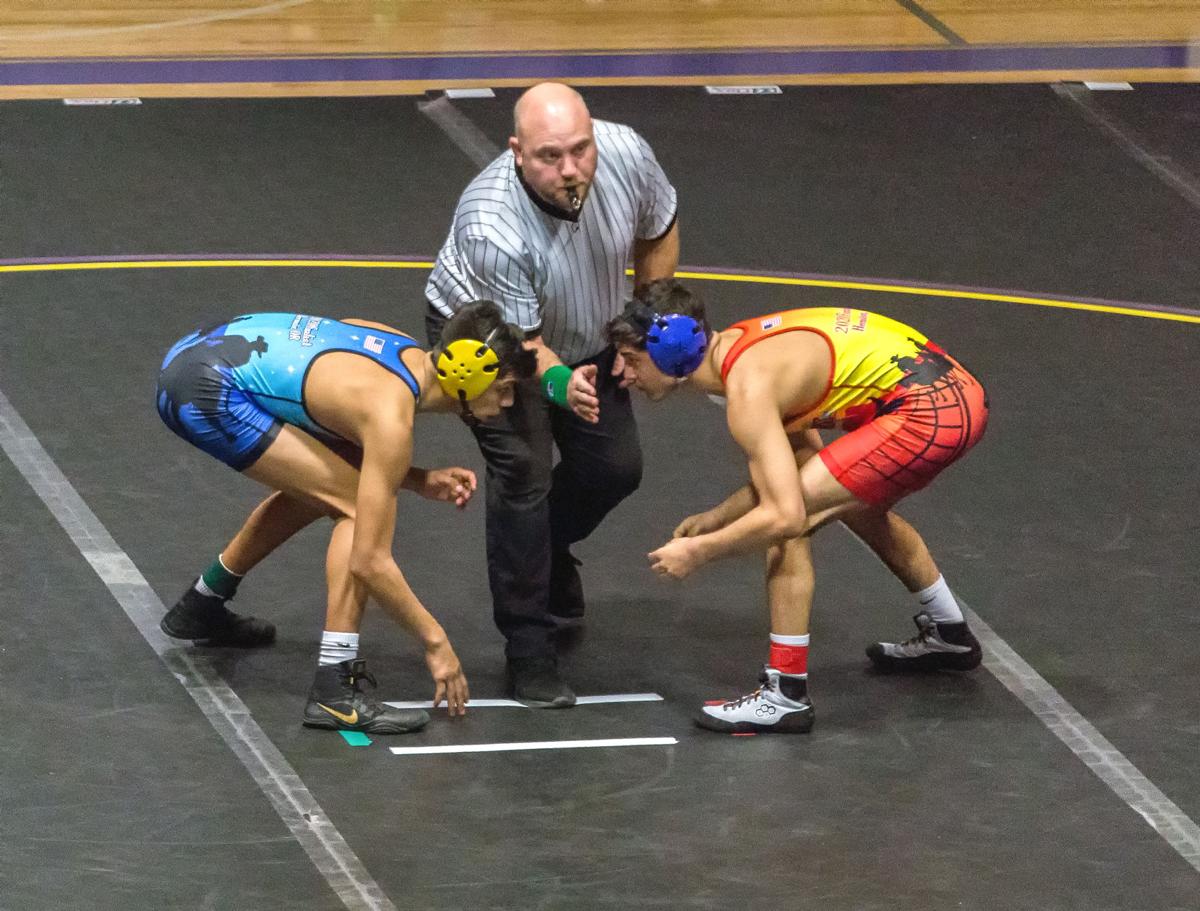 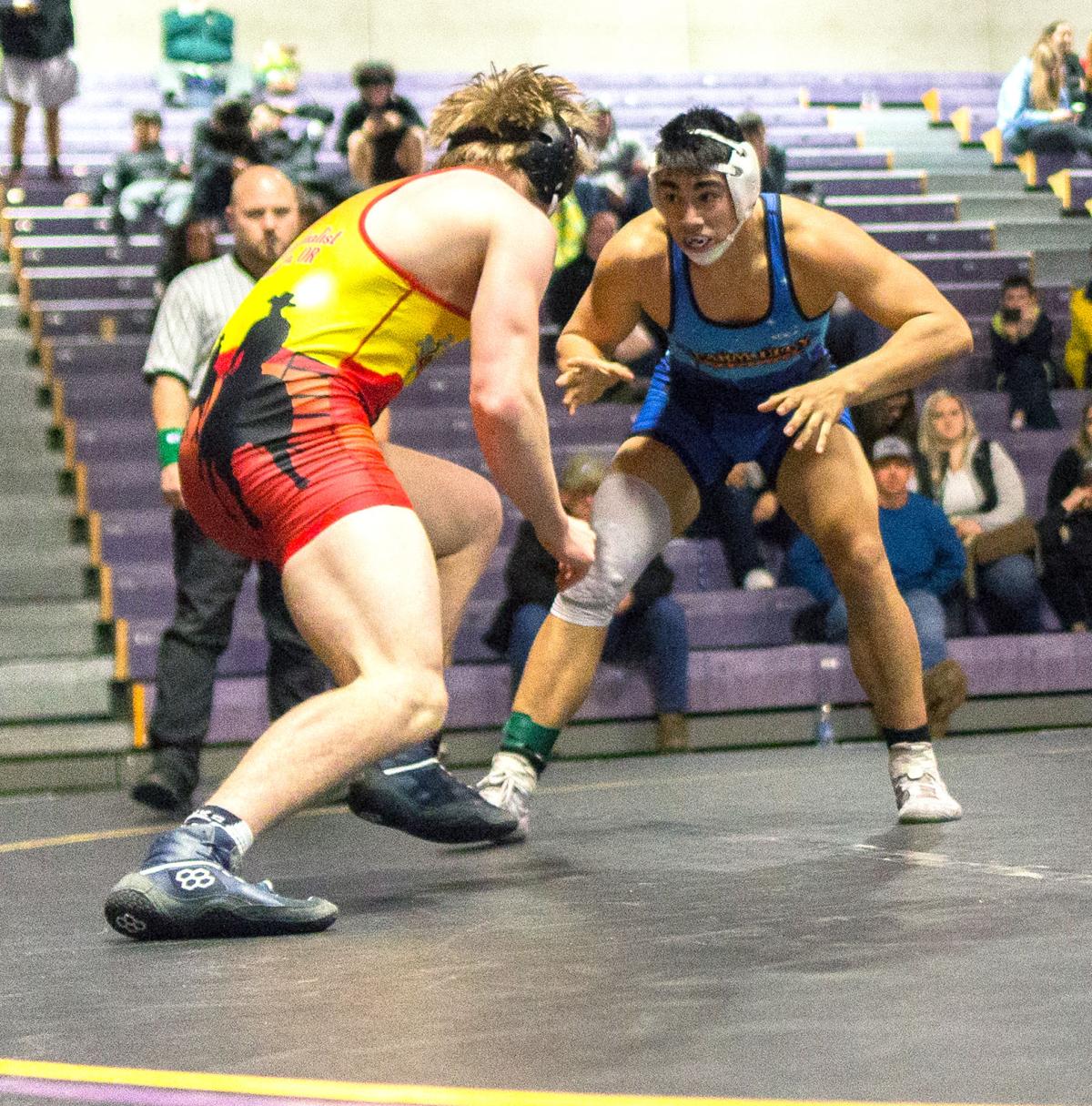 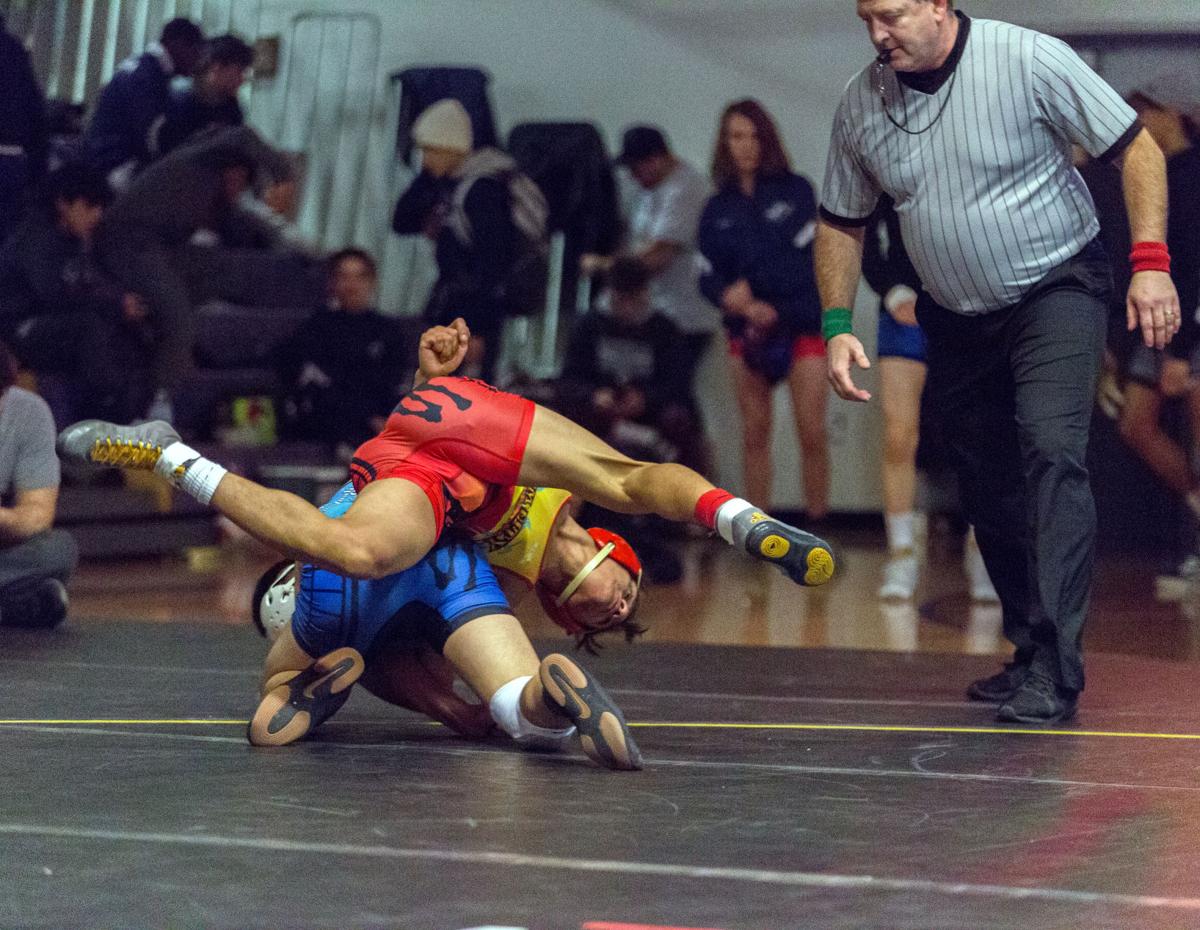 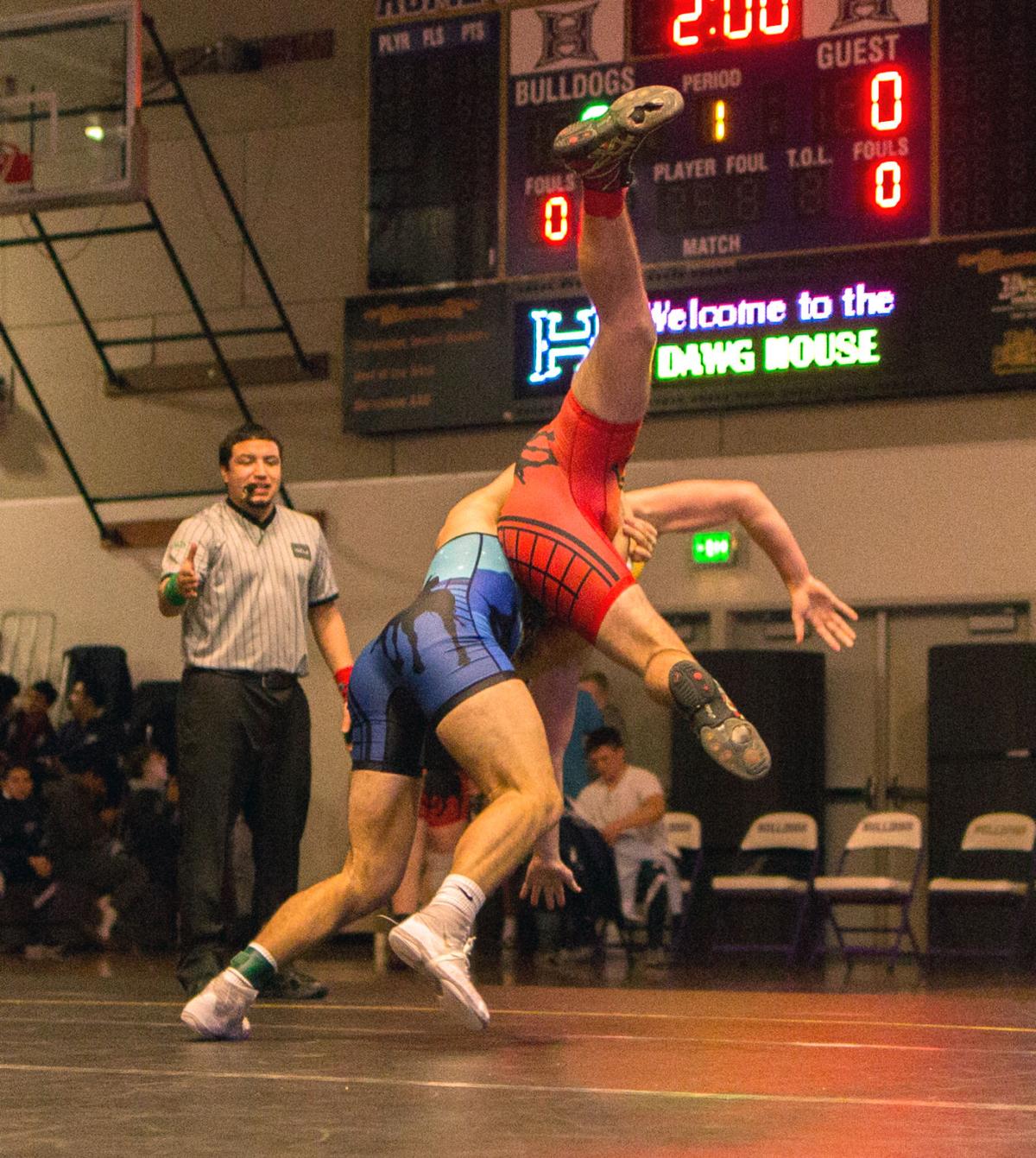 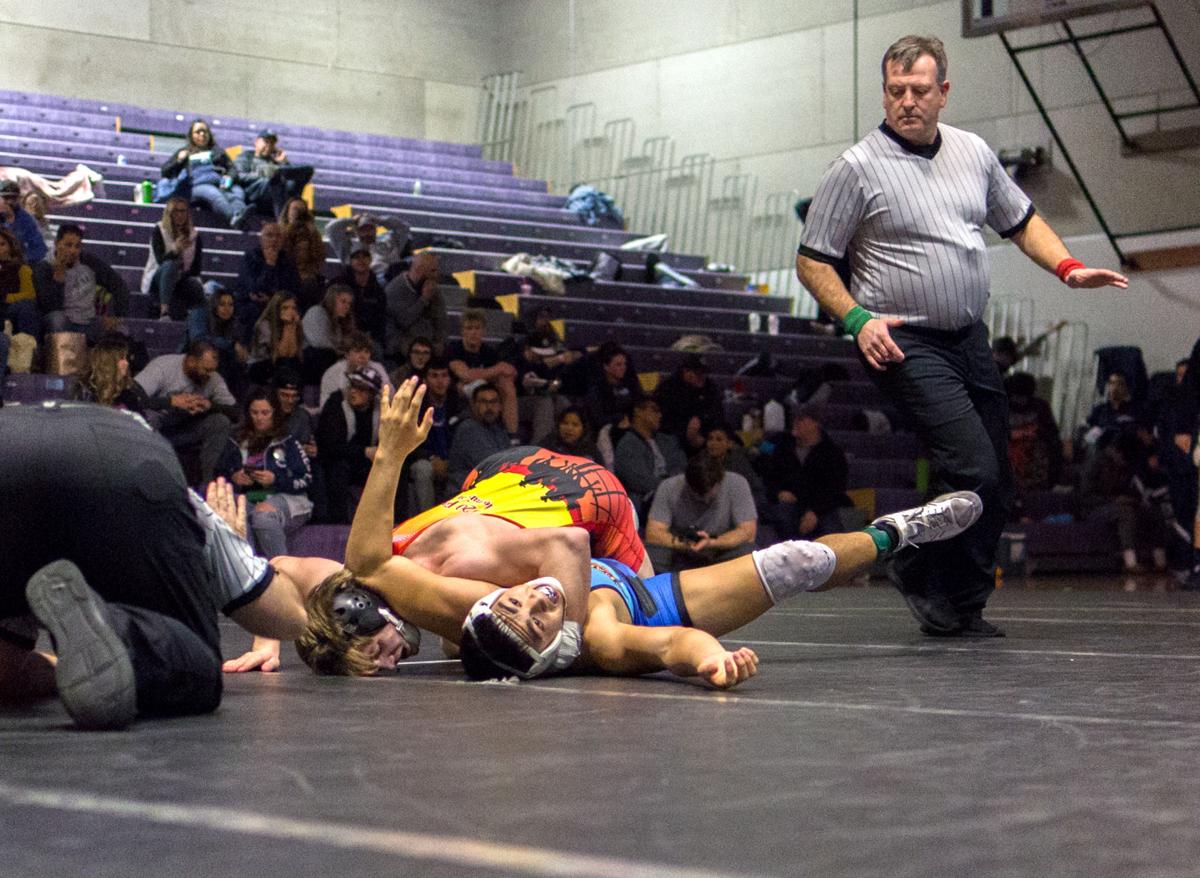 Hermiston’s Daniel Faaeteete (in blue) gets pinned by Tyson Stover of Chiawana in the 182-pound championship match of Saturday’s Farm City Invitational.

Hermiston’s Daniel Faaeteete (in blue) gets pinned by Tyson Stover of Chiawana in the 182-pound championship match of Saturday’s Farm City Invitational.

Sam Cadenas is only in his second year of wrestling, but the Hermiston sophomore made quite a statement Saturday, winning the 220-pound title at the Farm City Invitational.

Cadenas’ win helped the Bulldogs to second place in the team standings with 248 points — just a bit better than third-place Zillah (228.5), but a distant second to Chiawana, which rolled up a whopping 439 points.

The Riverhawks had 11 guys in the finals, and came away with six titles.

“It was a great effort by all the guys,” said Riverhawks coach Jack Anderson, whose team also won the title last year. “I’m proud of the guys, not only the ones in the finals, but the ones in the consolation finals. Every win counted today. This was a tough tournament. We love coming here. The community is great, and there’s great competition.”

The host Bulldogs had five in the finals, and Trevor Wagner (170) joined Cadenas atop of the winner’s podium. Finishing second were Adrian Delgado (120), Daniel Faaeteete (182) and Jon Lee (220).

“There were 11 teams with a mix of state champions and team champions,” Hermiston coach Kyle Larson said. “We didn’t want to throw an awesome tournament and not win anything. When Trevor steps on the mat, he wants to put on a show and get people to their feet. Sam and Jon make each other better. You know they will push each other to be better. Same with Sean (Stewart), who was fifth (at 220).”

Cadenas beat Lee 8-6 in the championship bout, coming back from a 3-2 deficit in the second round. Lee won the 220 title last year.

“It’s the excitement, and the adrenaline starts pumping,” Cadenas said of going into a match. “Everything closes down and it’s a one-on-one battle to the end. It’s fun.”

Cadenas opened the tournament with a 15-second pin of Nick Lackey of College Place, then pinned Othello’s Josue Solorio in the quarterfinals in 5:03.

In the semis, Cadenas beat Stewart 7-1 to advance to the finals.

“I like seeing new faces, like the Othello kid,” Cadenas said. “He was small, and that was tough for me. He was a good kid, and pretty strong.”

Against Lee, Cadenas got the initial takedown, but Lee maneuvered an escape, and was awarded a point after two stalling calls on Cadenas to make it 2-2 after the first round.

“That’s what they call, but I’m backing up to set up my shot,” said Cadenas, who finished fourth last year. “I need to work on that.”

Cadenas led 6-5 after the second round, got a key takedown with 49 seconds left in the third round, then held on for the win.

Wagner, who said he wasn’t feeling well at the start of the day, pinned all four of his opponents to improve to 19-5 on the season.

In the the title match, he pinned Liddell Giles of Othello in 1:22.

“I didn’t really feel great, but I battled through it,” Wagner said. “I didn’t know who that kid (Giles) was, but I treat every kid the same. We got to see a lot of kids we do see, and some from Idaho we don’t. It was good to be at home and sleep in our beds.”

Wagner’s quickest pin on the day came in his first match against Irrigon’s Zachariah Koekemoer, which lasted just 42 seconds.

Faaeteete trailed 9-0 to Chiawana’s Tyson Stover in the finals before Stover pinned him at 2:51 in the second round. Stover (27-2) also won the 182 title last year.

Delgado, who won the 113-pound title a year ago, suffered a 13-4 loss in the finals to Nathan Gregory of Deer Park, who won the Class 1A 113-pound state title last year. Gregory improved to 22-3 with the win over Delgado.