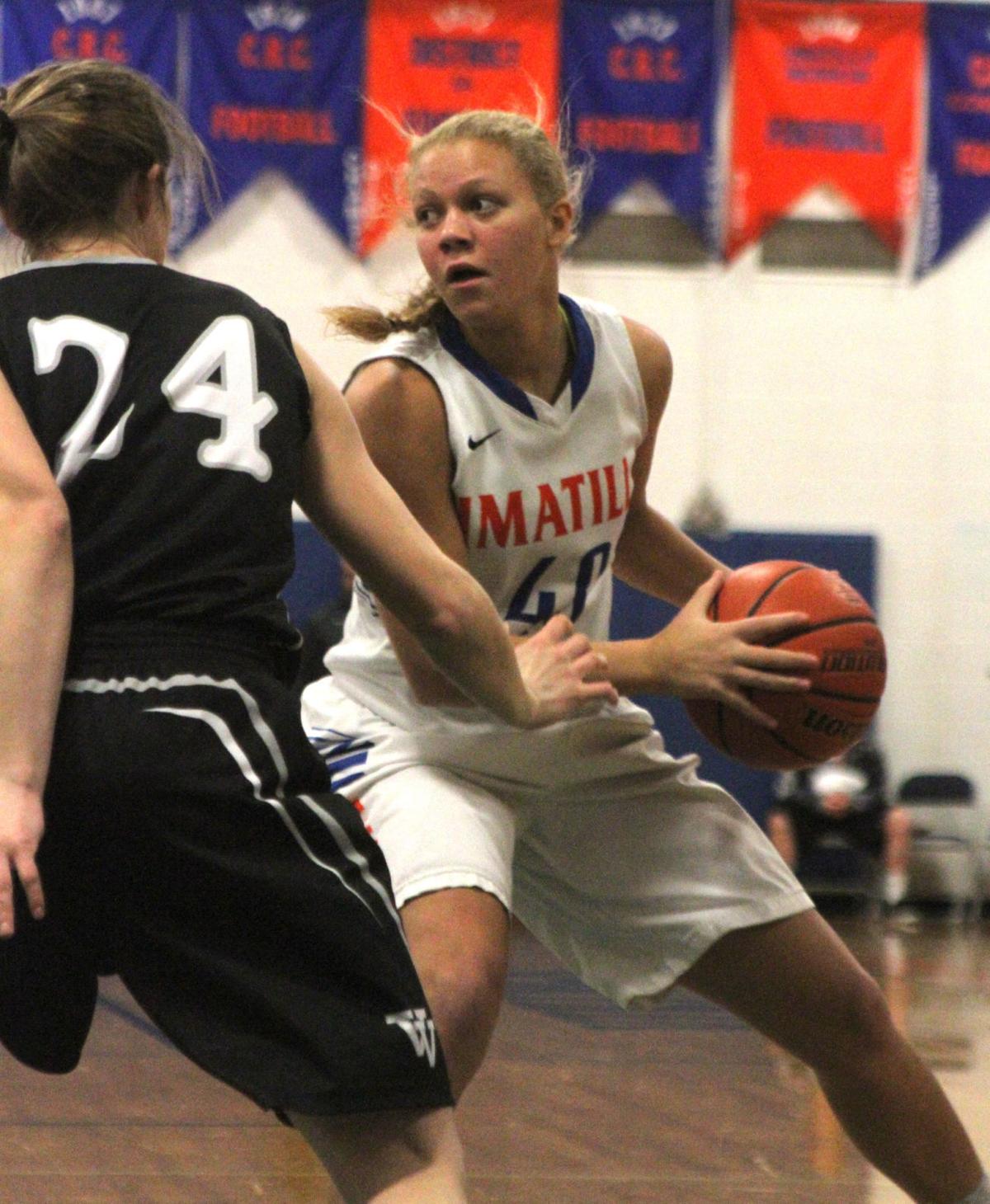 Staff photo by Sam BarbeeUmatilla junior guard looks for a team to pass to as Vale's Daillie Johnson defends during Umatilla's 36-25 win Saturday at The Pit. 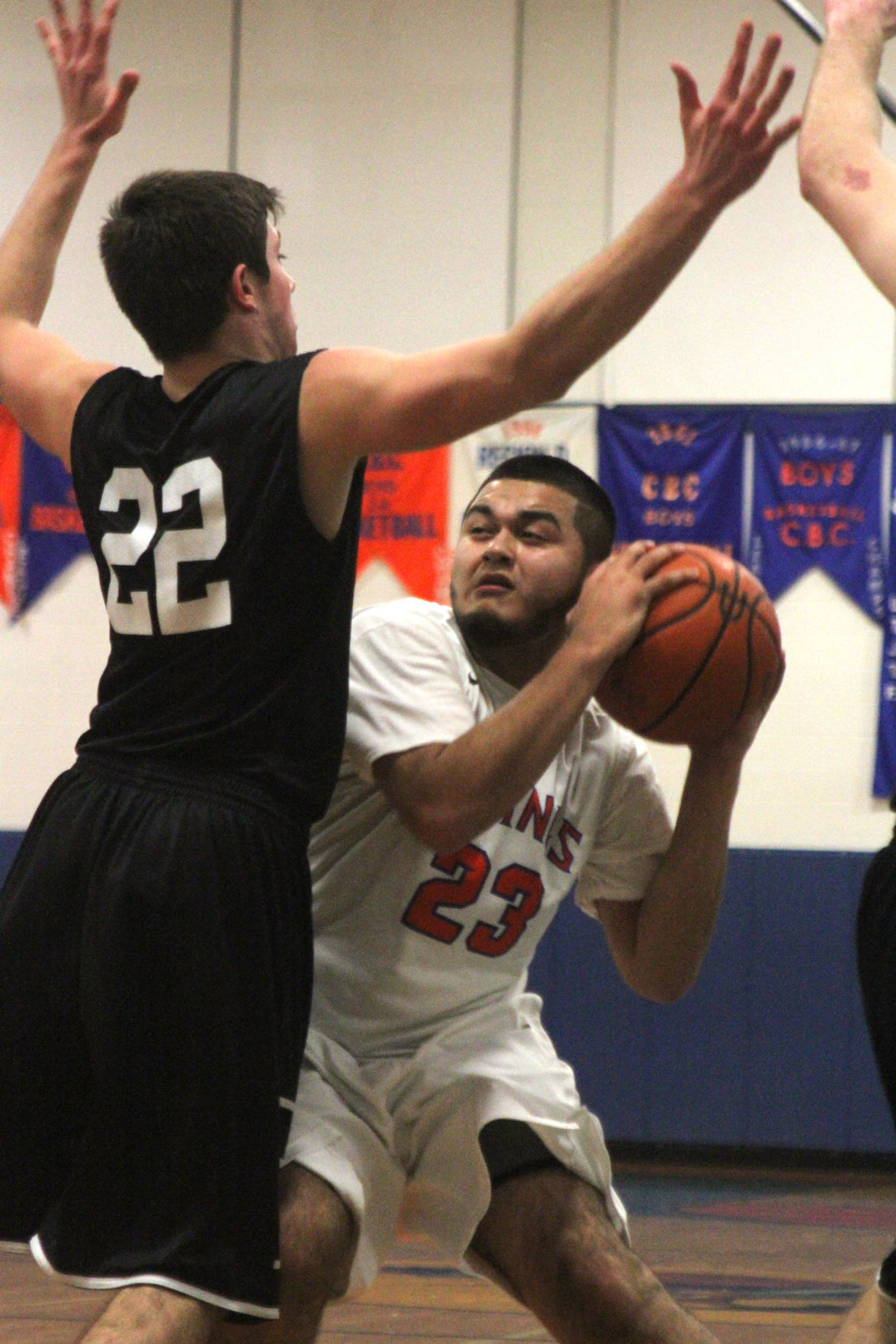 Staff photo by Sam BarbeeUmatilla senior Juan Coria (23) starts to spin out of a double team of Vale's Jake DeLong (22) and Brock Mattos during Umatilla's 47-38 win Saturday at The Pit. 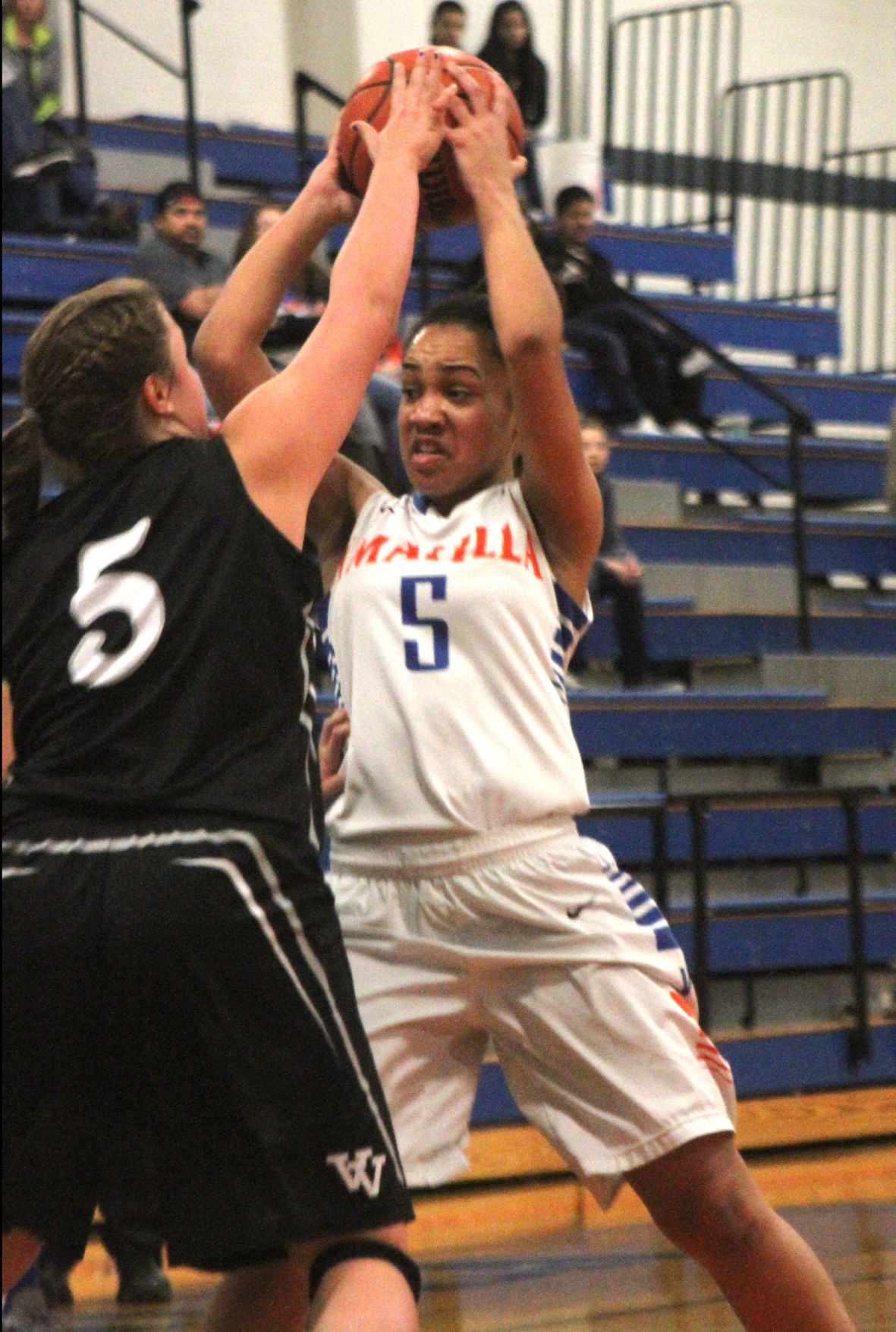 Staff photo by Sam BarbeeUmatilla's Taija Coffey (5) tries to rip the ball away from Vale's Alisa Burkhardt during Umatilla's 36-25 win Saturday night at The Pit. 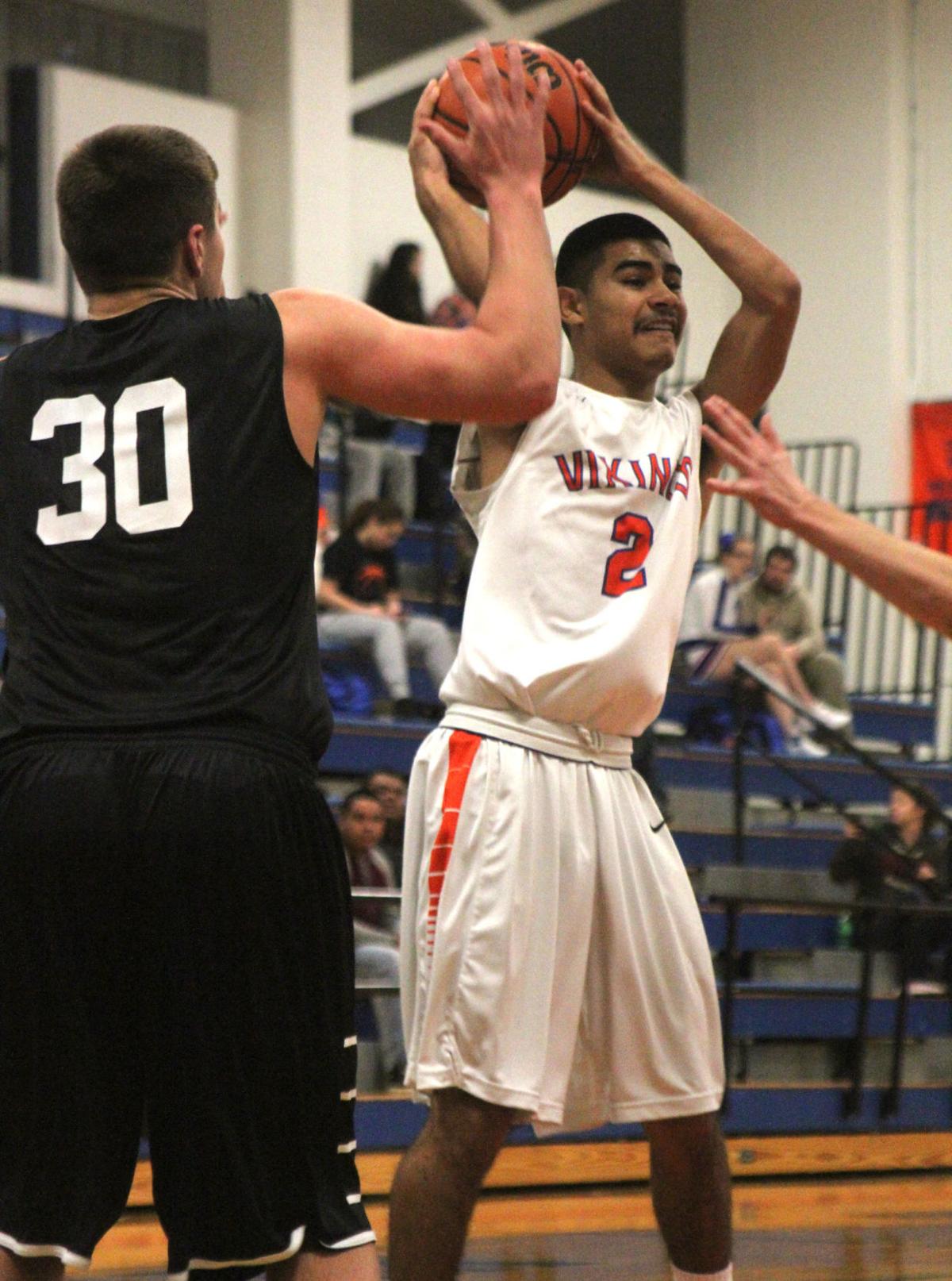 Staff photo by Sam BarbeeUmatilla junior guard looks for a team to pass to as Vale's Daillie Johnson defends during Umatilla's 36-25 win Saturday at The Pit.

Staff photo by Sam BarbeeUmatilla senior Juan Coria (23) starts to spin out of a double team of Vale's Jake DeLong (22) and Brock Mattos during Umatilla's 47-38 win Saturday at The Pit.

Staff photo by Sam BarbeeUmatilla's Taija Coffey (5) tries to rip the ball away from Vale's Alisa Burkhardt during Umatilla's 36-25 win Saturday night at The Pit.

Though the Umatilla Vikings girls basketball scored only six points in the first quarter Saturday against Vale and just 10 in the first half, don’t tell them it was a slow start.

“It was just two great teams going at it,” senior Sidney Webb said.

In all, the blue and orange-clad Vikings used an exceedingly rare six-point play in the third quarter to down the black and silver-clad Vikings 36-25 at The Pit despite having no scorers in double figures.

Vale’s Alisa Burkhardt led all scorers with 10 points, and Aleesha Watson led Umatilla with eight. With the win, Umatilla (13-4, 3-0) takes a one-game lead over Vale (10-6, 2-1) in the Eastern Oregon League and has won four straight games.

Neither team could find any footholds early on. They combined to shoot 5-18 in the first quarter and neither team made a field goal in the second quarter. Umatilla shot 15 percent in that half and Vale shot just 14 percent. Both teams were heavily pressuring the ball and not allowing either offense to be comfortable or get good looks.

Then Umatilla’s offense finally got into a groove in the third quarter.

Aleesha Watson hit a 3-pointer — the first of the game — with 5:52 on the clock, and two minutes later Gaby Contreras hit a 3-pointer to put Umatilla up 16-11. A foul was called on the play on Vale away from the ball, counting the basket and keeping possession with Umatilla. Off the in-bounds, Webb hit a 3-pointer providing the rare six-point play, giving Umatilla its big lead at that stage at eight points and jump-starting the offense.

“Once you get us going, it’s usually there,” Webb said.

Vale came back. Abby Hamilton scored four points and Amanda Trenkel scored two, but the lead was eight headed into the final period, where Umatilla started to pull away.

The eight-point lead ballooned to 12 when Brenda Campos scored with 5:37 remaining in the game and 13 when Watson made two free throws with 13.7 seconds left, and Vale couldn’t shrink the lead under eight points.

With two more contests against Vale, Umatilla isn’t assuming anything. But this win got it through the first round of EOL play unscathed. Webb said her team wants to go undefeated in EOL play.

“We want it,” she said simply.

Desperate for a win, the Umatilla boys basketball team finally got it, downing the Vale Vikings 47-38 Saturday night at The Pit.

Umatilla head coach Derrek Lete used a different starting lineup Saturday, leaving the seniors on the bench. Juan Coria, Aaron Simmons and Tristen Sanguino came off the bench in favor of freshman Sebastian Garcia, sophomore Seth Cranston and freshman Trent Durfey in an effort to improve the offensive production. Umatilla (8-9, 1-2) was yet to score 40 points in EOL play and hadn’t scored 40 since a 40-29 win over Mac-Hi two weeks ago.

“We were just trying to make a chance,” Lete said. “We just weren’t producing. We hadn’t had any offensive production. We scored 30-something points the last couple of games and just went with some younger kids to kinda send a message to the older kids that, ‘Hey, you’re job’s on the line,’ kinda thing.

“I just wanted to see them respond, and I thought they responded well today.”

There, Umatilla built a six-point lead when Coria hit a 3-pointer two and a half minutes into the frame at 16-10. Vale, though, roared back.

Cody Towers had four points and Zach Jacobs had four, and Brock Mattos had two as Vale pushed ahead 20-19 despite another Coria 3-pointer. Vale would go into the locker room for halftime up 22-21.

Down 24-23 with around three minutes left in the third quarter, Webb showed why there is a cause for optimism. He scored 12 straight points for the Vikings capped by a layup, and suddenly the Umatilla was up 35-26 heading into the final period.

“I was nice to see Kaden,” Lete said. “I wouldn’t say Kaden’s had a rough year, but he hasn’t lived up to everyone’s expectations. I think it was kind of a confidence thing. I think he’s been pressing on himself and he’s got high expectations as we all do for him. It was nice to see him get some shots to drop and get up some points.”

There, Umatilla tried to take the air out of the ball and kill the clock, but Vale didn’t make it easy. The visiting Vikings cut the lead to three when Derek Hiatt scored two points, but Simmons scored on the ensuing possession pushing the lead back to five, and it was quickly 10 when Simmons got another basket.

Umatilla had multiple chances to put Vale away from the free throw line, but missed five of eight free throws down the stretch the leave the door if not open, at least unlocked.

But Umatilla’s defense held firm and sent the Vale Vikings east without a win west of the Blue Mountains.

“Great first league win,” Lete said. “It’s good to get it under our belt. I’m happy for the boys.”

Umatilla heads to Stanfield for a non-league double-header on Tuesday. The girls tip at 5:30 p.m. and the boys tip at 7 p.m.