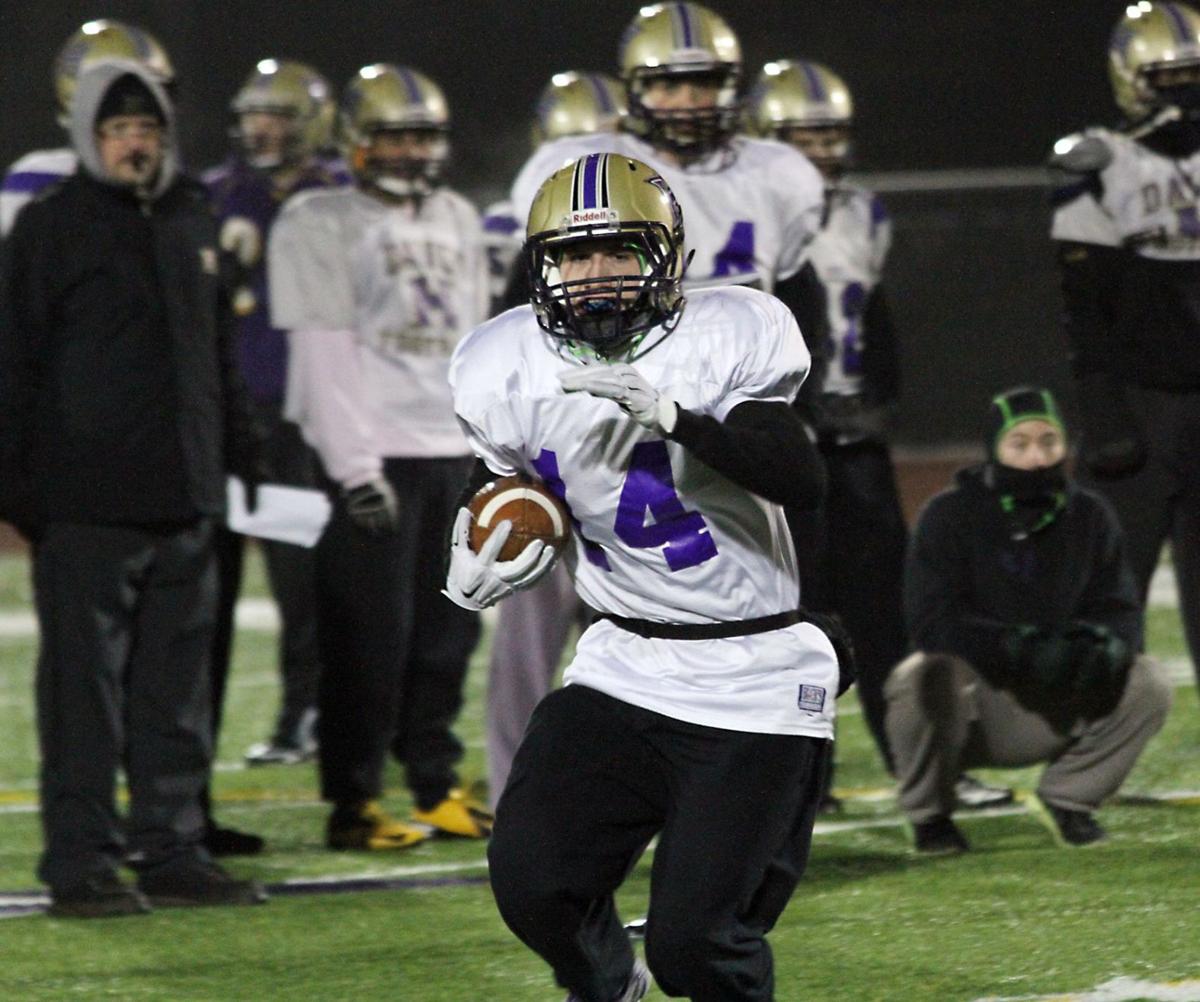 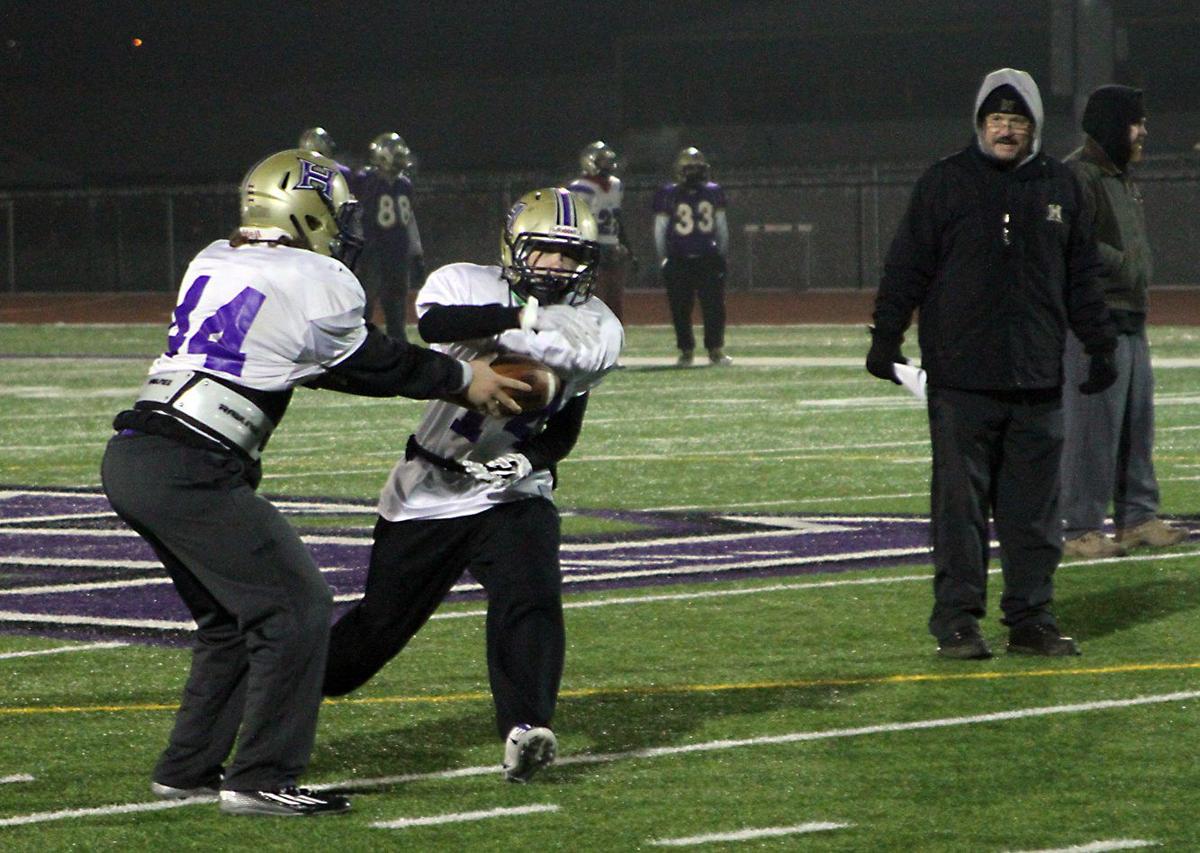 Hermiston running back Cory Adams isn’t a big guy. He stands just 5 feet, 9 inches, and is listed at 175 pounds. He doesn’t have huge arms or tree trunks for legs.

What he does have, though, is explosion. Lots and lots of explosion.

That’s not by accident, either. The senior power cleans — a lift that is designed to create explosion — 245 pounds. He says that’s what he focused on last offseason.

“I think a big thing to my advantage is how explosive (I am) and how fast I can accelerate,” Adams said after practice Tuesday. “My speed makes up for my size.”

The senior eclipsed the 1,000-yard mark in Hermiston’s quarterfinal win over Liberty on Saturday and has scored 11 touchdowns this season. In six of Hermiston’s 11 games, Adams hit the century mark. He also achieved a milestone with 2,000 career yards against Liberty.

In Saturday’s milestone game, Adams rushed for 125 yards on 38 carries. That many carries is a lot for a running back of any size, especially one just 5-foot-9.

“(That is a) statement of his toughness right there,” Bulldog head coach Mark Hodges said. “He’s got an outstanding work ethic, so he’s in fantastic shape, real good physical condition. So, even though he’s not that big, he can handle the pounding.”

Hodges said Adams’ ability to carry the mail, so to speak, comes from his work off the field.

Adams is averaging 94.3 yards per game and 6.4 yards per carry. His explosiveness was on display against Hood River Valley, when he rushed for a combined 285 yards on just 24 carries, good for almost 12 yards per carry. He’s added 102 yards on 10 catches through the air.

Despite the successful year and career, Adams doesn’t take individual credit for his play. “It definitely starts up front with the offensive line getting the good push and opening the gaps and me doing my assignment and what I’m coached to do,” he said.

Hodges said early in Adams’ career, he was a little too eager to get into the hole and allowed that offensive line to open those holes and get their shoulders turned.

This season, his patience in the hole has been one of his biggest improvements, Hodges said, but his speed and physicality are what Adams leans on.

Adams’ backfield mate, Sam Colbray, is the bigger, more physical runner, but Adams is faster. Adams is the big-play threat, while Colbray is the goal line back.

So Adams is a huge part of the game plan every week. The only game Adams didn’t get a full workload — excluding his injury-shorted game against Sandy in the playoffs — was against The Dalles, when two of his four carries went for touchdowns.

Adams’ older brother, Bobby, who is an assistant coach for the Bulldogs, starred for Hermiston earlier this decade. As a senior in 2012, the elder Adams brother ran for 2,058 yards and 24 touchdowns. He was the featured — and only — ball carrier for Hermiston that year, unlike the younger Adams, who has Colbray and Luis Medina to spell him at times.

Hodges, who coached both brothers, said Bobby was more of a “slasher-type,” while Cory is a “touch” faster than Bobby. Bobby Adams’ phenomenal season, mostly, had to do with him toting the ball 303 times to his brother’s 163 this season.

“A lot of people (ask) ‘Are you gonna beat your brother’s record?’ ” Cory Adams said. “Me and my brother never fought about that. It was just kind of like, you’re this runner, I’m this runner. Definitely, he taught me, comes over after practice, coaches me up. (He’s) definitely a big role model.”

Without hesitation, Hodges said Adams can play in college. He said the senior’s ability to catch the ball out of the backfield and his speed are good enough at the next level. Add in Adams’ solid play at corner, as well, and the seventh-year coach has confidence his tailback has the potential to keep his career moving.

Adams, though, isn’t so sure. He’s waited to start his potential recruiting process until the season is over, and his concussion against Sandy postponed a recruiting trip to Pacific University in Forest Grove.

“There is something in the back of my head that makes me want to (keep playing),” Adams said. “... But I can’t really tell you right now. It’s just undecided.”