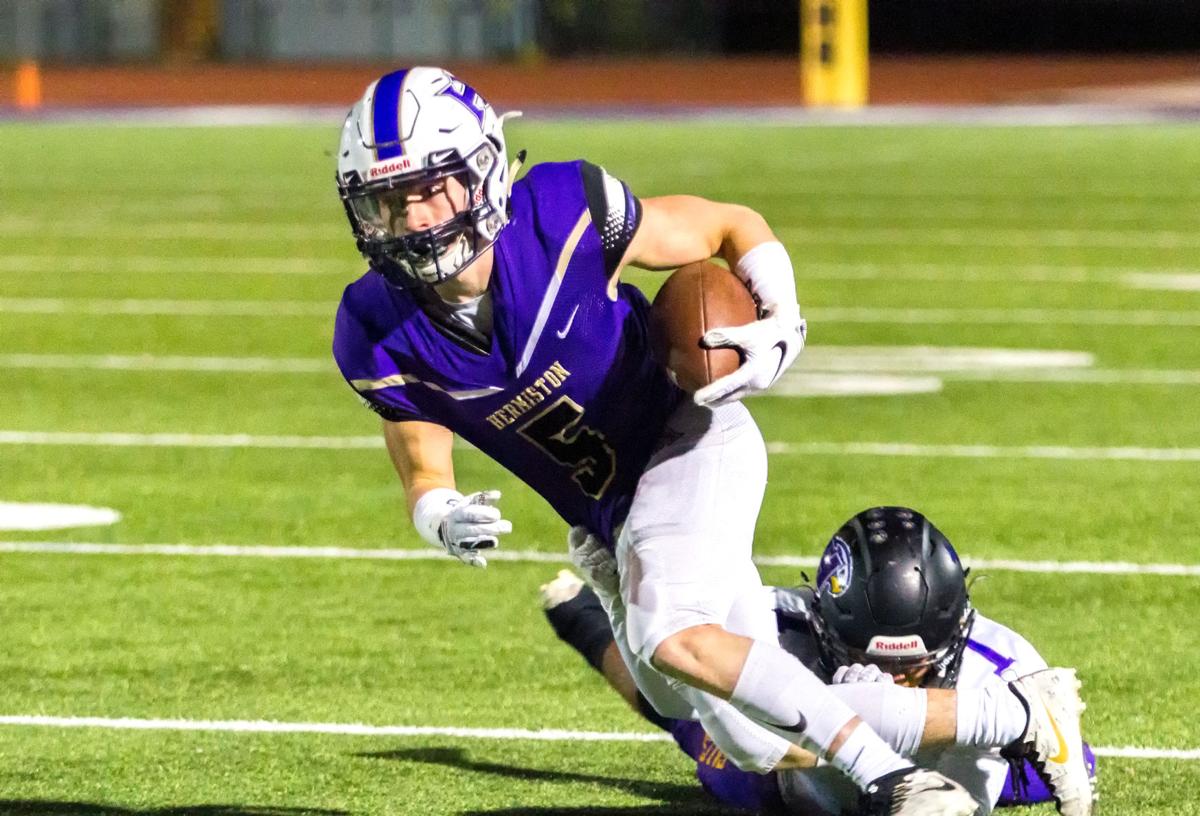 Garrett Walchli (5) evades a tackle during Friday’s game against the Hanford Falcons. 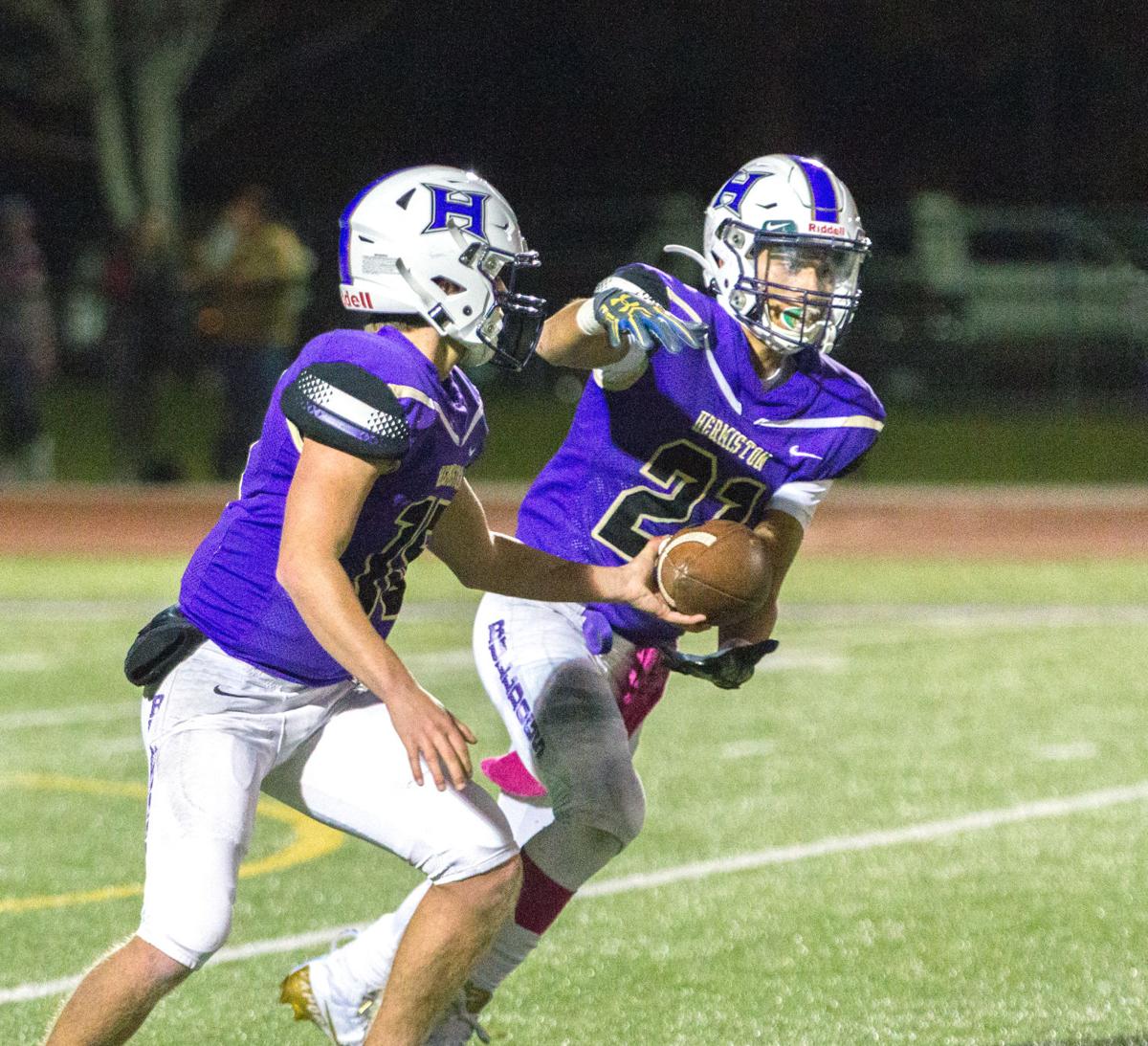 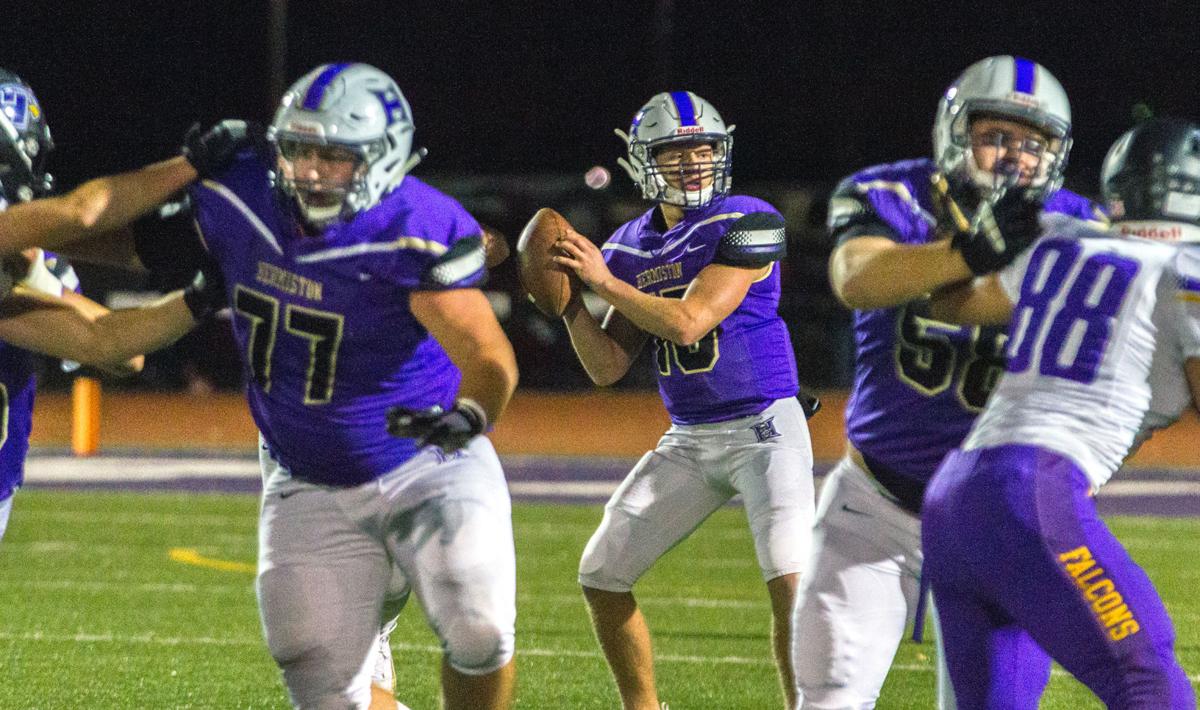 Hermiston quarterback Sam Schwirse (15) looks for a receiver during Friday’s game against the Hanford Falcons.

Garrett Walchli (5) evades a tackle during Friday’s game against the Hanford Falcons.

Hermiston quarterback Sam Schwirse (15) looks for a receiver during Friday’s game against the Hanford Falcons.

In a play straight out of the movie “Rudy,” Hermiston starting wide receiver Trevor Wagner went to coach David Faaeteete and asked that senior Zach Tovey start in his place Friday night against Hanford.

Tovey, who has been hurt most of his high school career, started the first series of the game against Hanford, carried the ball 6 yards on a reverse. It was one of a few bright spots in what would be a 50-28 Mid-Columbia Conference loss to the Falcons at Kennison Field.

“That’s a testament to him,” Hermiston coach David Faaeteete said of Wagner. “To have him (Tovey) come out, be successful and contribute is big.”

To Wagner, it was the right thing to do.

“He comes to everything,” Wagner said. “He has been troubled with injuries and I felt it was only right he got to start on Senior Night.”

Senior Garrett Walchli had four touchdown catches on the night for the Bulldogs, bringing his season total to nine.

“It was a lot of fun,” Walchli said. “We were battling the wind all day.”

Hanford took a 21-0 lead at the end of the first quarter, getting scoring passes of 25 and 21 yards from Easton Wise-Hyde, and an 8-yard run by Idrian Cerna.

Hermiston would hold the Falcons scoreless in the second quarter.

The Bulldogs scored with 1:47 left in the first half as Walchli hauled in a 4-yard pass from Sam Schwirse.

Hermiston’s series started after D.J. Wilson intercepted Wise-Hyde and took the ball out to the Hanford 40-yard line.

The Falcons helped the Bulldogs down the field with a face mask penalty, a roughing the passer penalty, and a pass interference penalty in the end zone on fourth down.

When the Bulldogs got to replay fourth down from the 4-yard line, Walchli got the touchdown.

Walchli also had touchdown catches of 80, 18 and 6 yards in the second half as the Bulldogs never backed down.

“We are never satisfied,” said Walchli, who had 11 receptions for 185 yards. “Our record does not show who we are.”

Hermiston played the last part of the game without Faaeteete, who was ejected with 4:47 remaining in the third quarter for disputing a ruling on a fumble by Trevor Wagner.

“That was a big momentum swing,” Faaeteete said. “We were only down 15 at the time.”

The Falcons scored two plays later for a 36-14 lead.

Kamari Durmas led the Falcons with 173 yards rushing, while Cerna had 98 yards and three touchdowns.