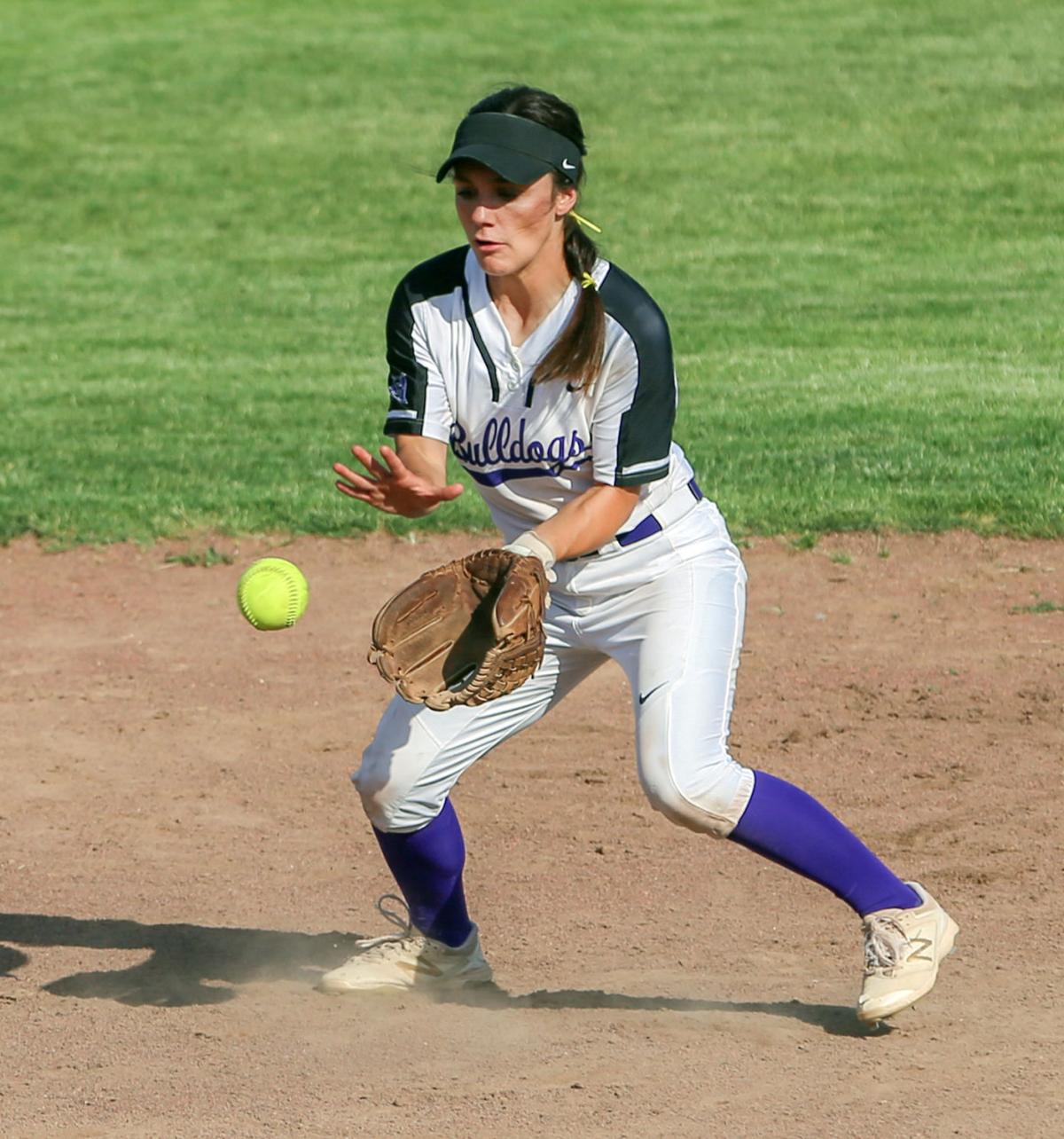 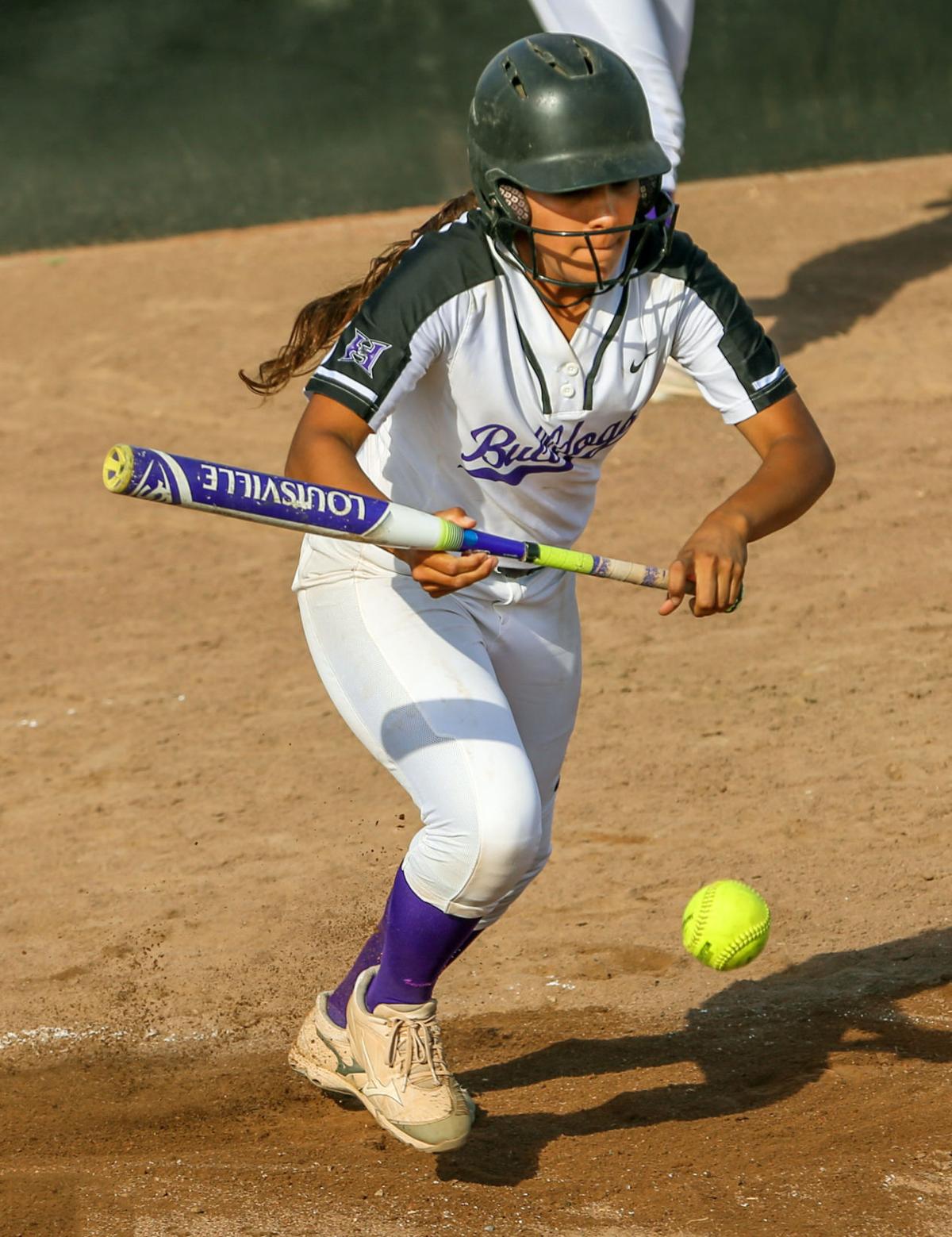 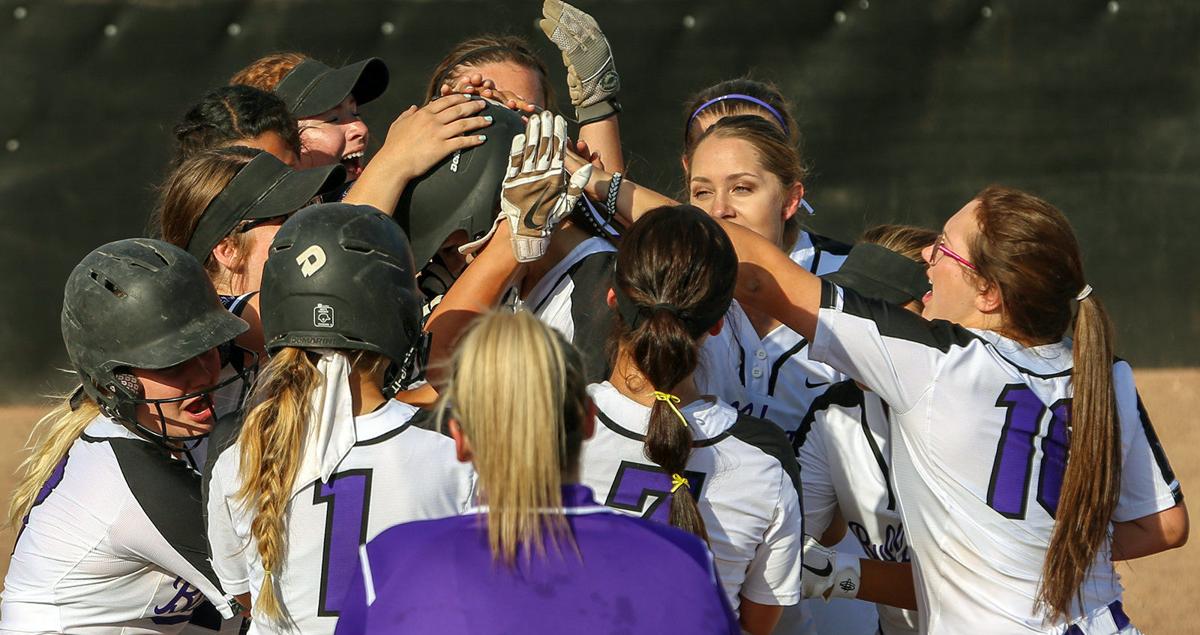 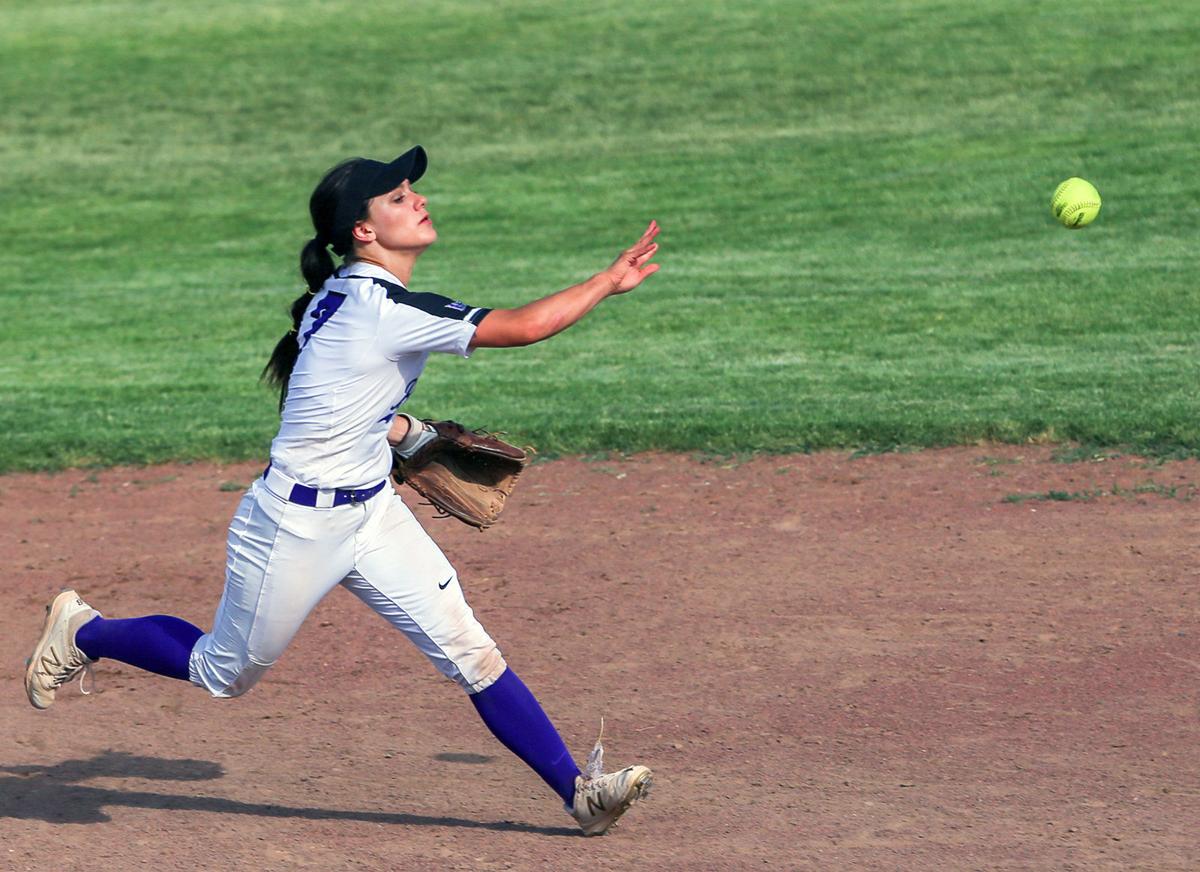 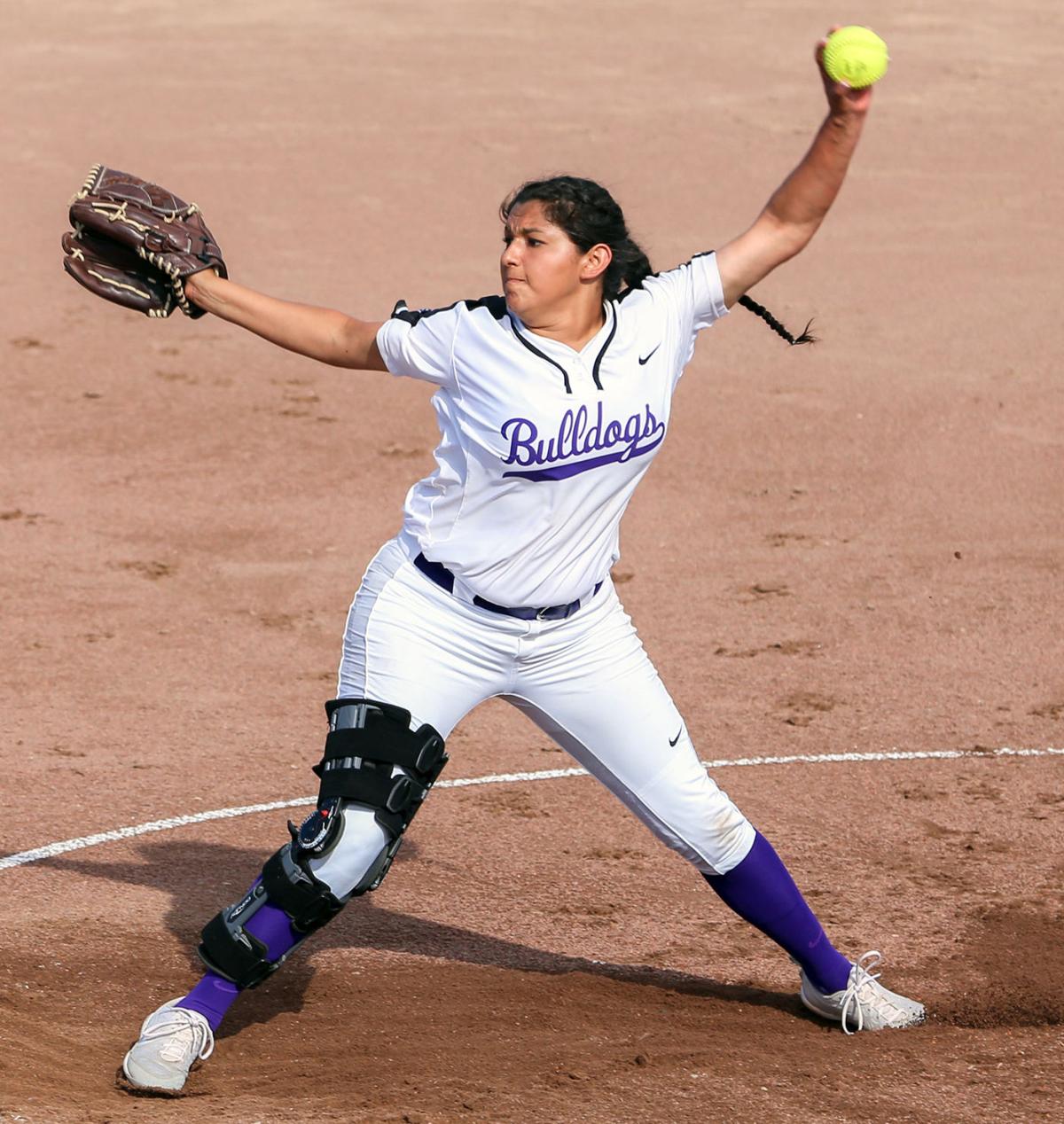 HERMISTON — Senior Julissa Almaguer was one pitch away from throwing her first complete game of the season.

Hermiston’s ace had missed most of the year due to a knee injury sustained in the season opener on March 13, but has been adding to her pitch count since the Bulldogs’ 5-4 win over Pendleton a week and a half ago.

“It doesn’t hurt as much,” Almaguer said of her knee. “My arm is kind of sore though, I’m still getting there — practicing a lot to get where I need to be.”

On Wednesday, that practice would be tested against No. 10 Eagle Point. The Eagles of the Midwestern League made the trip to Hermiston, and with them brought a battle-tested squad.

After three lead changes, the Bulldogs got the advantage back heading into the top of the seventh.

An Eagle Point single put the tying run on base, but a highlight reel-worthy double play cleared the bases and put Hermiston one out away from its first quarterfinal appearance since 2013 — where the Bulldogs fell 1-0 in the championship game against Sandy.

On a 2-2 count, Almaguer was just one strike away from sealing the victory and advancing the Bulldogs. But Eagle Point’s Corie Dodge would give the ball one last rip in the hopes of knotting the score. Dodge sent the ball flying high, deep into center field.

“I was like, ‘Oh my gosh,’” Almaguer said. “I was nervous because I wanted Amanda (Barron) to catch it and I knew she would do anything to catch that ball.”

Barron did in fact record the out, ending the game to give Hermiston its fourth consecutive win.

The Bulldogs (17-9 overall) had to come back from a two-run deficit brought on by defensive miscues.

After a single and double put the Eagles (18-9) on base, a sac fly advanced runners into scoring position and after the next at bat, both Gillian Willis and Miyah Smith scored to give Eagle Point a 2-0 lead.

“We made the first mistake, they took advantage and they scored first,” Greenough said. “It’s a game of outs and that’s kind of the cool part, that one inning can go great and the next can’t.

“The nice part is that we didn’t have an inning like that the rest of the game. We were able to transition, get mentally prepared and get excited. That’s the maturity and that’s the growth — how do you respond after the mistake?”

Hermiston didn’t respond until the third inning, but it was enough to take control of the ball game and put the pressure back on the visitors, who had been pretty successful on the road so far this season.

Against Riley Shopp in the circle, the Bulldogs were finally able to get some offense going with a hard grounder that forced an error and a walk to put runners on base for Ashley Cameron, who was due up.

Cameron had already recorded a single, and was using her keen eye to find Shopp’s weak spot.

“She’s such a sound hitter,” Greenough said. “She doesn’t swing at balls, she’s relatively aggressive when it’s her pitch and that makes her at bats really meaningful.”

Cameron waited for her pitch and sent the ball over the left-field fence for a three-run home run, her third of the season.

The homer ignited the team, which allowed only one more Eagle Point run and responded with another in the fifth to reach the game-winning score.

“I think it helps everybody out,” Cameron said of her feat. “It feels good after, of course just for me, but also for the team too. They can feed off of that, it keeps them up, keeps them energized and I feel like it just puts excitement in everyone just to do better.”

Sam Atilano tallied the go-ahead RBI to go 1-for-2 at the plate. Cameron led all batters, finishing 2-for-3, and three other Bulldogs each notched a hit.

Hermiston will now turn around and get ready for a Friday matchup with Lebanon. The Warriors (13-14) defeated Hillsboro 6-5 to advance to the quarterfinals. The first pitch is slated for 5 p.m. at Rocky Heights.

On Sunday, three Eagle Point students were killed in a car accident after a driver hit their car going the wrong way on Interstate-5. The three girls, Gisselle (Jennifer) Montano, Luciana Tellez-Cabezas and Esmeralda Nava, were all seniors.

To pay their respects and honor their competitors, the Bulldogs welcomed Eagle Point with a banner than read “Welcome Eagle Point, We Care,” flowers and a card.