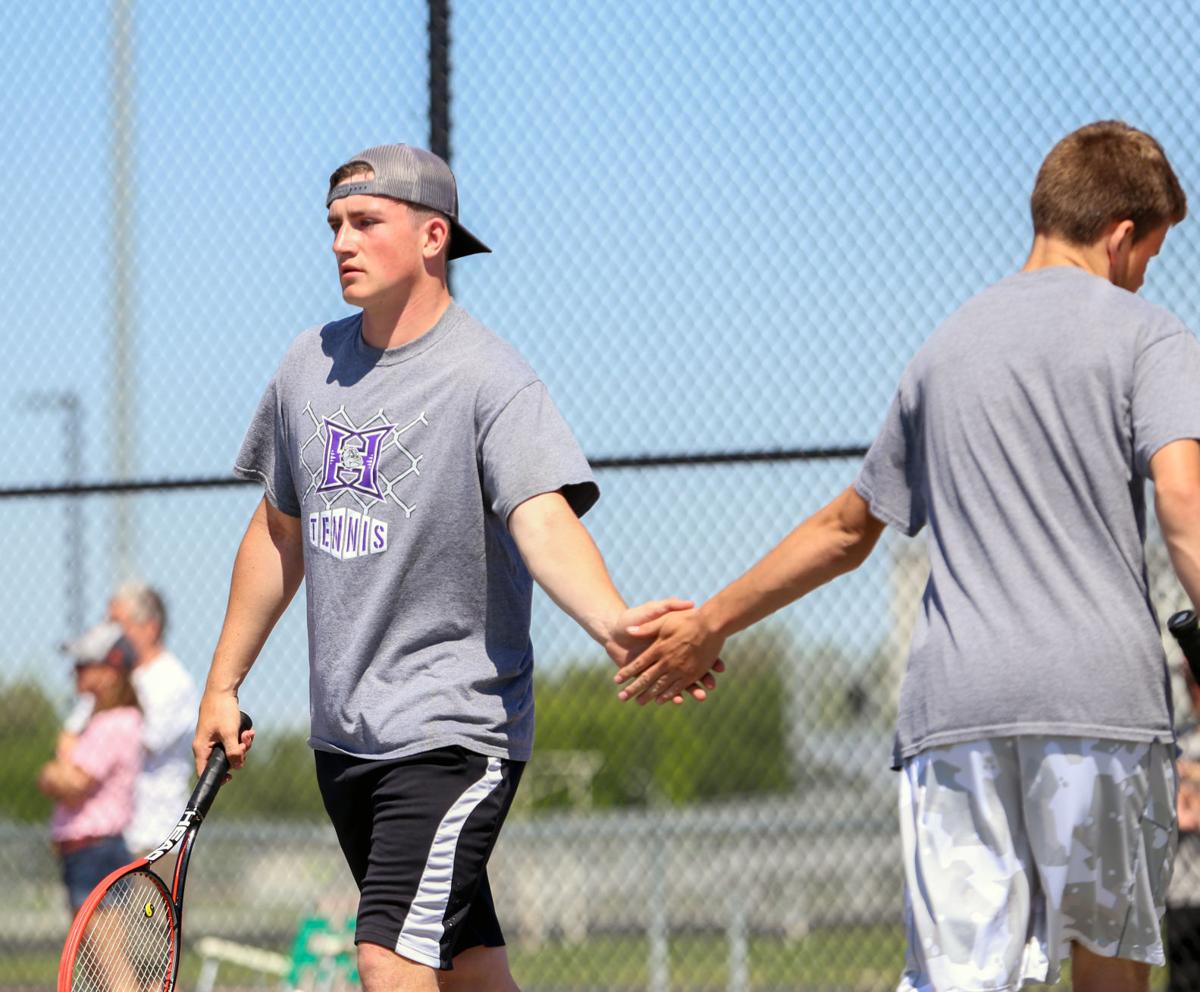 Hermiston's Thomas McCullough slaps hands with his doubles partner Patrick Wicks after winning a point at the district championships Saturday in Hermiston. 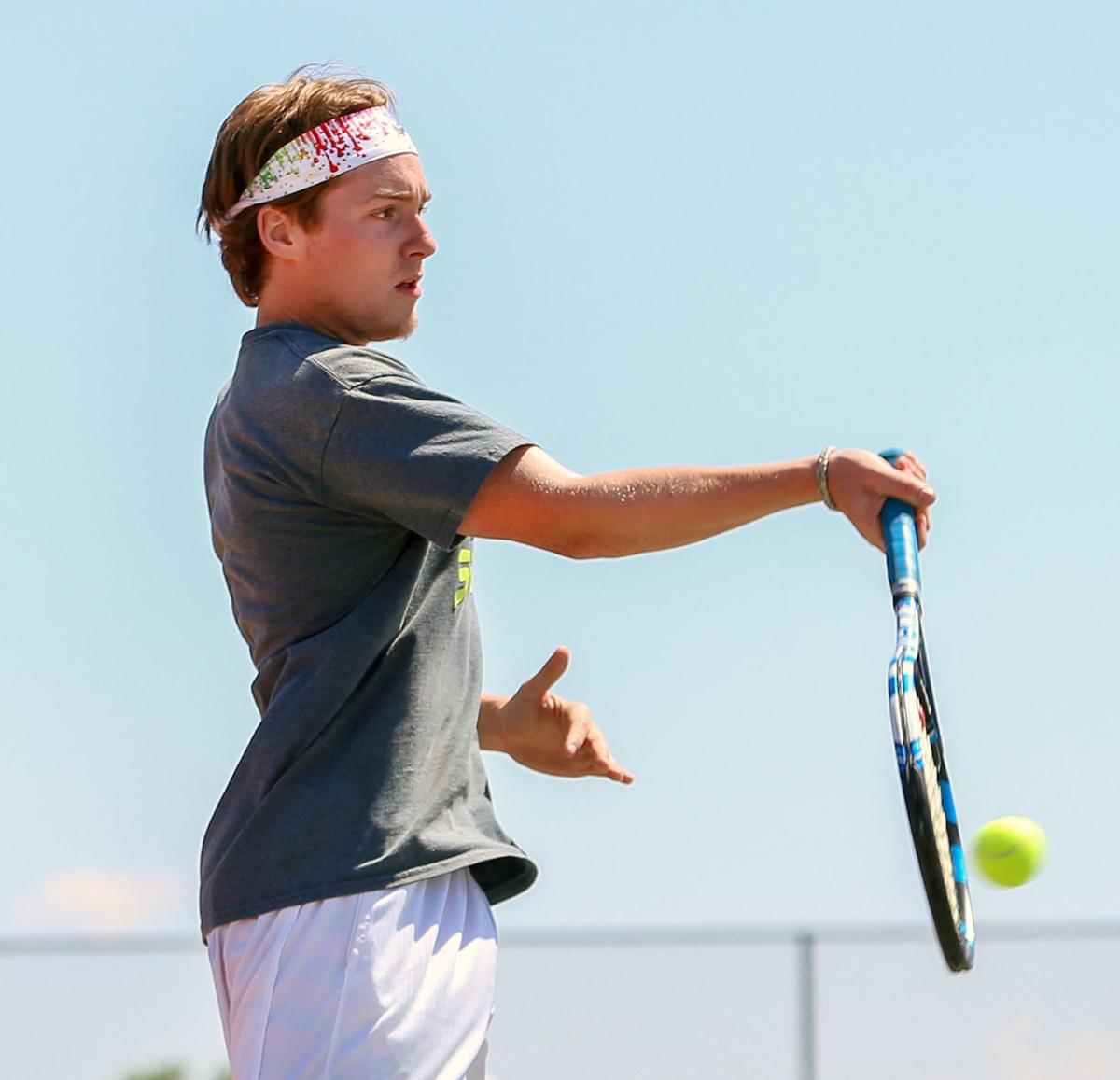 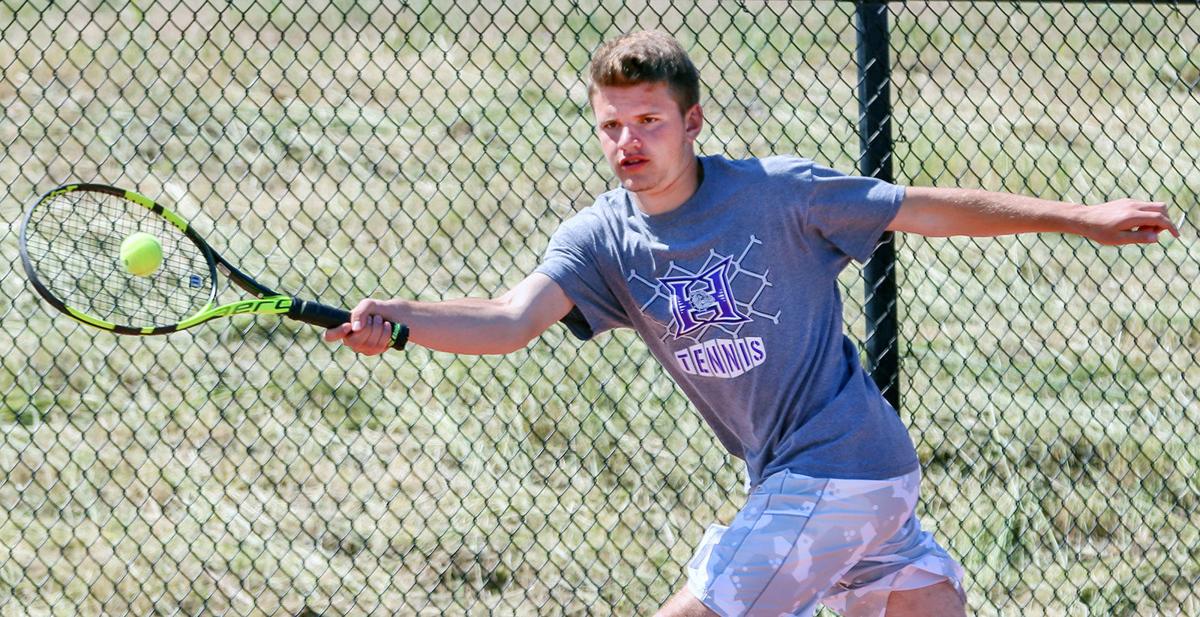 Hermiston's Thomas McCullough slaps hands with his doubles partner Patrick Wicks after winning a point at the district championships Saturday in Hermiston.

Seven teams, including Hermiston and Pendleton, competed over Friday and Saturday at Hermiston High, Sandstone Middle School and ALMS. Th Bulldogs had three seeded entries: No. 8 Hayden Cissna in singles, and doubles pairs No. 4 Patrick Wicks and Thomas McCullough and No. 7 Matt Eckhardt and Trent Pitney.

Cissna made it the farthest out of any local player and was Hermiston’s only placer. He finished sixth after a tough match against Summit on the final day of competition.

“It’s been such an accomplishment just getting to sixth (place) and being able to play someone like that in the last round, it really made me emotionally,” Cissna said, “but once I started focusing in, it really brought my game together and the pressure just added to me doing my best.”

Cissna’s Day 2 started early with a 9 a.m. match against TJ Fourneir of Mountain View where he took an 8-6 victory. The win pitted him against Summit’s Cade Doan in the fifth-sixth place match. Doan topped Cissna, 6-1, 6-4, but the Bulldog’s efforts didn’t go unnoticed.

“I thought Hayden played the best tennis I’ve seen him play,” West said. “It’s always nice to see people rise to the occasion for events like this and the kid he was playing has obviously played a lot more tennis, but he (Cissna) had his mindset right.

“He was determined to get that win so that was awesome to see him show some excitement and some emotion when he was playing and do something special and place for us.”

Before Cissna wrapped up the day for Hermiston, Wicks and McCullough had a match of their own to play. The duo fell into the consolation bracket after Day 1, and handily defeated their competition to face Bend’s Magnus L’Argent and Kyle Taylor in the consolation finals.

“They got stuck in the tough bracket,” West said of the duo’s first day. “The atmosphere of that was championship style match play, unfortunately we came up a little short but glad they were able to go out of the winners bracket playing the best tennis.”

The senior pair only gave up two games en route to the finals and then defeated Bend, 6-3, 6-2, for their last match as Bulldogs.

“It felt really good,” Wicks said. “The four years being together, it was a really good time.”

Hermiston’s Eckhardt and Pitney made it through the first round of play after winning the tiebreaker, 7-5, 4-6, 14-12, but were knocked out in Round 2 by a tough Hood River duo.

No other Bulldog made it past the first round and neither did any Pendleton Buckaroos.

With the boys hosting the district champions in town, the girls team traveled to Bend to play some tough competition in hopes of making it to state.

Senior Mackenzie Hill will be pitted against Churchill sophomore Youha Tanaka in Round 1 of state. Hill advanced to the state tournament after earning the fourth and final qualifying spot. Doubles pair of Reed Middleton and Breena Wadekamper will be facing a tough draw in No. 2 seeded duo from Corvallis, Olivia McGough and Sarah Forester.

The state tournament will begin Thursday.