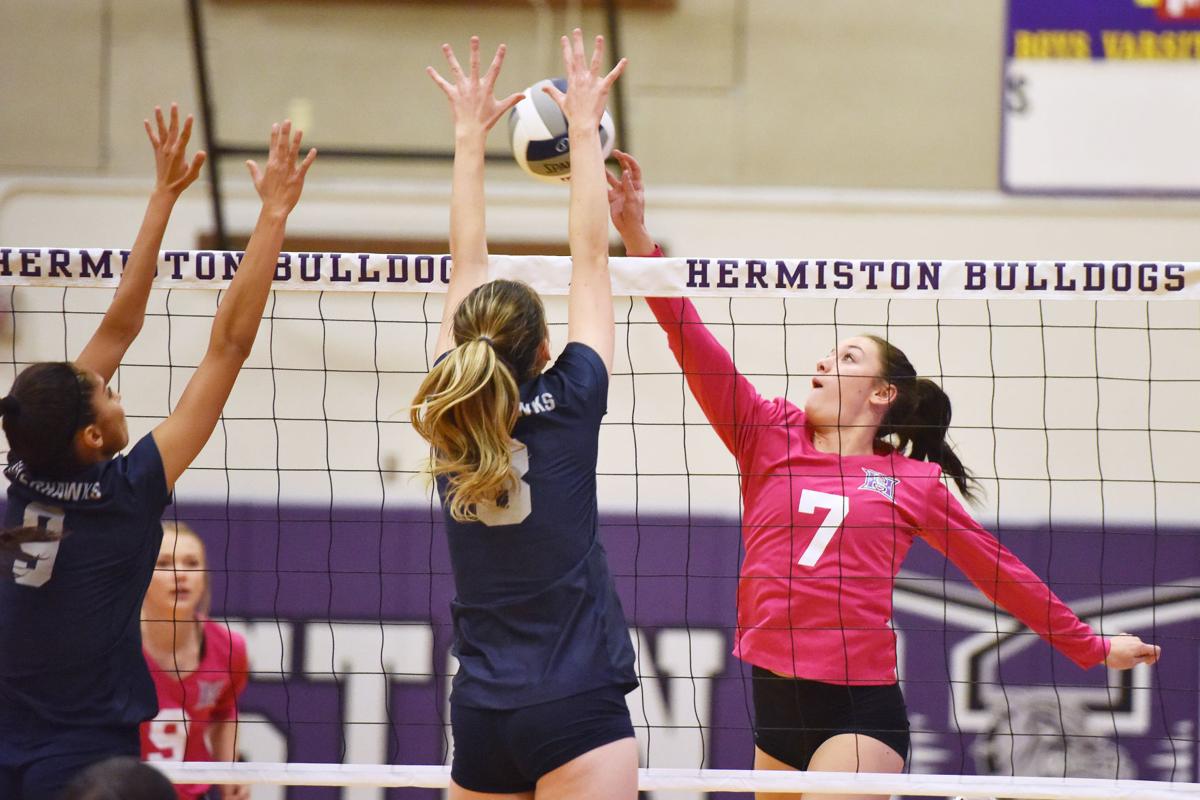 Staff photo by E.J. Harris Hermiston's Scout Reagan spikes the ball into the block from Chiawana's Yaleni Garcia (9) and McKenna Kaelber in the Bulldogs' 3-0 loss to the Riverhawks on Tuesday in Hermiston. 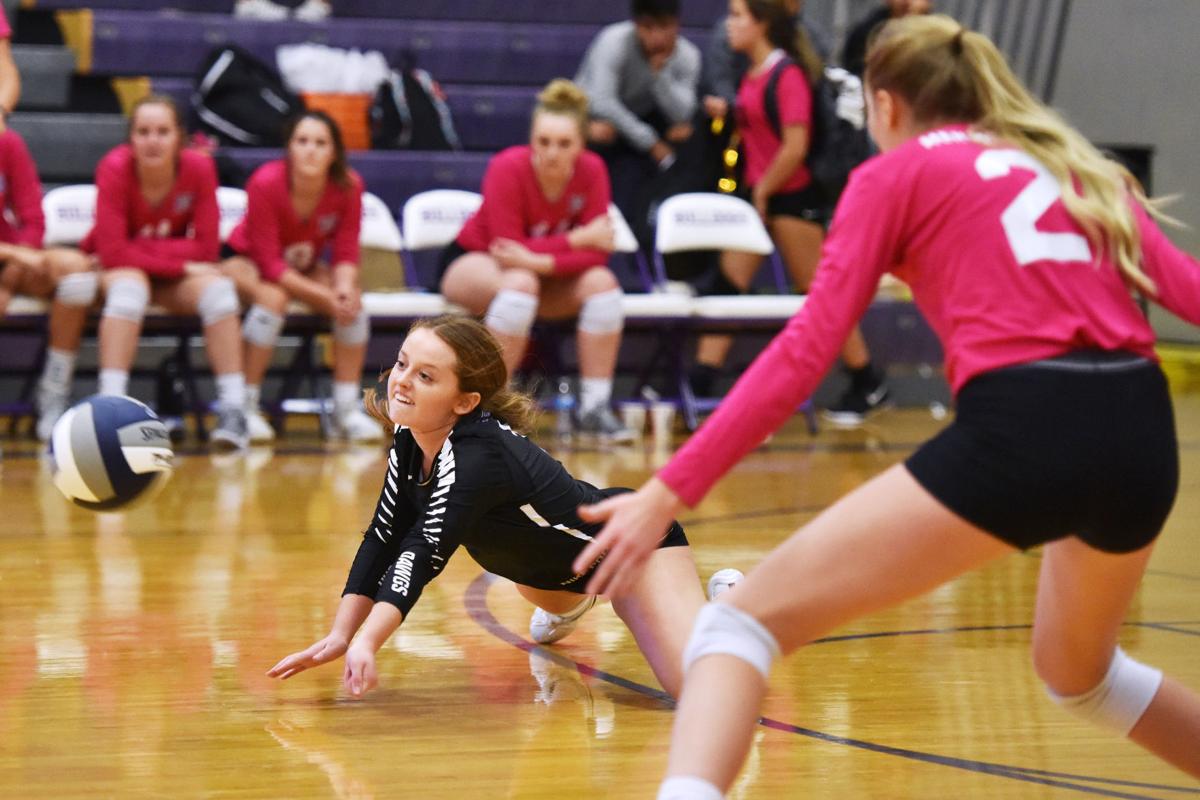 Staff photo by E.J. Harris Hermiston's Halee Stubbs dives for the ball in the Bulldogs' 3-0 loss to Chiawana on Tuesday in Hermiston. 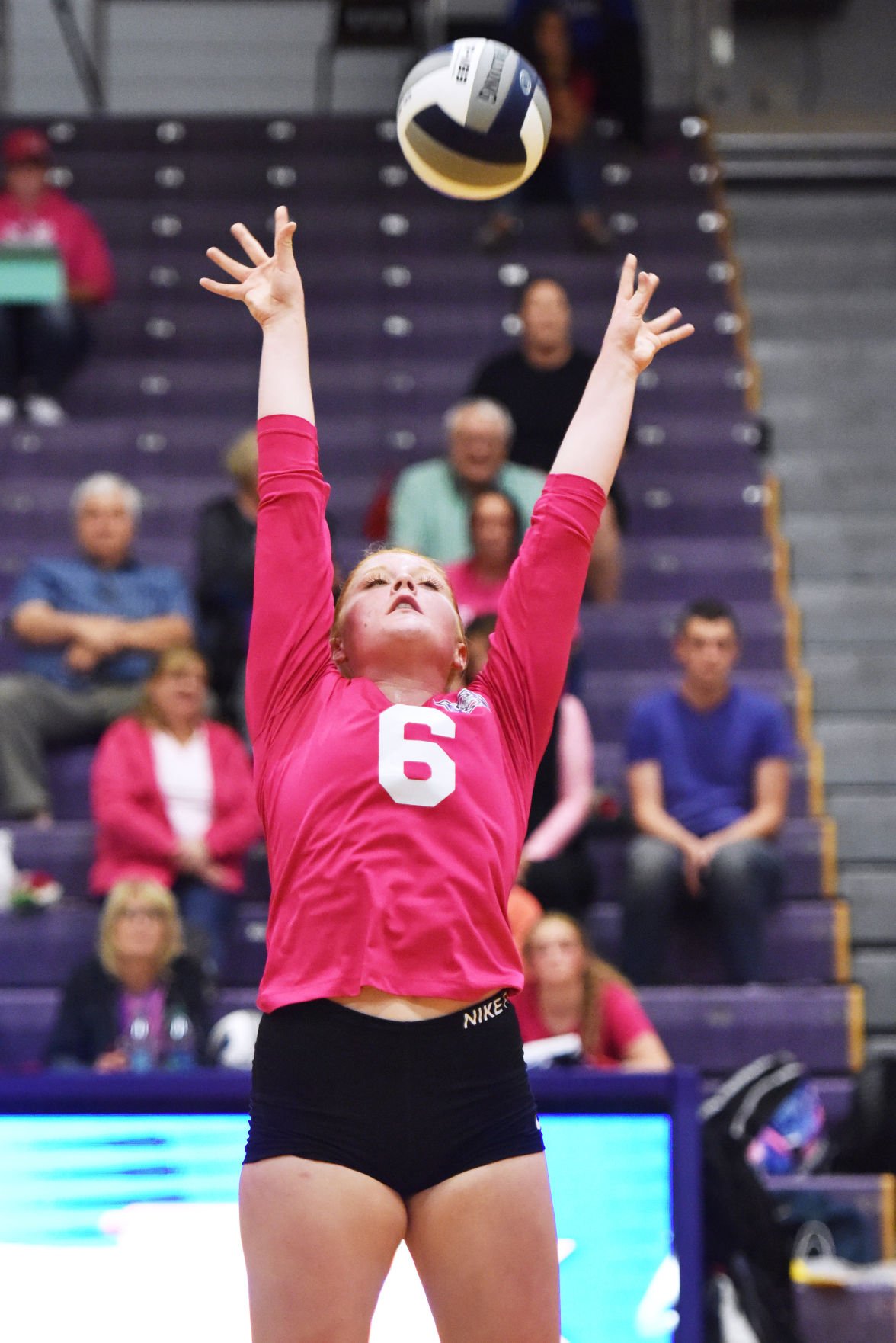 Hermiston’s Kendall Dowdy sets the ball in the Bulldogs’ 3-0 Mid-Columbia Conference loss to Chiawana on Oct. 2, 2018, in Hermiston. Dowdy returns this season for the Bulldogs.

Staff photo by E.J. Harris Hermiston's Scout Reagan spikes the ball into the block from Chiawana's Yaleni Garcia (9) and McKenna Kaelber in the Bulldogs' 3-0 loss to the Riverhawks on Tuesday in Hermiston.

Staff photo by E.J. Harris Hermiston's Halee Stubbs dives for the ball in the Bulldogs' 3-0 loss to Chiawana on Tuesday in Hermiston.

Hermiston’s Kendall Dowdy sets the ball in the Bulldogs’ 3-0 Mid-Columbia Conference loss to Chiawana on Oct. 2, 2018, in Hermiston. Dowdy returns this season for the Bulldogs.

The Hermiston Bulldogs were short-handed Thursday night for their Mid-Columbia Conference match against Pasco, but once they got into a rhythm, their game came together.

“When you have two middles and one (Haylee Hamilton) goes down, you have to be resourceful,” Hermiston coach Amy Dyck said. “A lot of it was hit or miss. We had half a practice with a new rotation.”

Scout Reagan, a 5-foot-6 senior, moved to the middle to replace Hamilton. She led Hermiston with 11 kills, while adding three blocks and six digs.

“She played middle last year, so this wasn’t new to her,” Dyck said. “She is a true athlete. It was fun to see her get up and get her rhythm back,

When Pasco won the first set, it was just the second it had won this year. Coach Julie Estes said the small victories lead to bigger things.

“They are improving every game,” Estes said. “They are starting to trust themselves and their teammates, and believing they can win.”

Pasco rallied from a 6-2 deficit in the first set, and finally took the lead for good at 13-12. The Bulldogs led by as many as seven points before securing the win.

“Every night in this league is tough,” Dyck said. “I’m proud we went three straight to win the match. We are prepared to fight every night.”

It was Pasco that had the early lead in the second set, but Hermiston tied the set at 10-10, then put a little distance between the teams with solid service runs by Emma Combes and Halee Stubbs. Reagan served set point.

Hermiston jumped out to a 14-3 lead in the third set, only to see Pasco pull within 23-21 late in the set. Ireland McDonough served for the win.

In the final set, the teams were tied at 11-11 before Combes reeled off seven consecutive points for a 19-11 lead. Pasco would fight back to make it 23-19, but would get no closer.

Chiawana had just one serve receive error last week during their Oct. 2 game. That and a few other things spelled doom for Hermiston in its Mid-Columbia Conference home match with the Riverhawks.

“We never showed up,” Dyck said. “I don’t know what the distraction was. We can have the greatest warm-up in the world, and as soon as the whistle blows we don’t have it. One day it will click and they will believe in themselves. They have the talent and the heart.”

Kylie Thorn, who had six kills and three aces, reeled off eight consecutive points in the first set as Chiawana jumped out to a 12-2 lead.

Hermiston’s Hamilton put three points on the board to pull her team within 15-7, and Kendall Dowdy added three more points to make it 17-10. The teams traded points to the end.

Kaelber and Hill combined for 10 points as the Riverhawks went out front 11-1 in the second set. The Bulldogs would not get closer than 10 points.

The third set was more of the same. Marissa Logozzo served seven consecutive points for a 7-1 lead, then Thorne reeled off eight more for a 17-1 lead.

With Chiawana leading 19-5, the Bulldogs committed four unforced errors as the Riverhawks put the match away.

“Against a team this good, we can’t send over a bunch of free balls,” Dyck said. “They take a free ball and say, ‘Thank you very much.’”

“We have six seniors who have been around awhile,” he said. “They know the game really well. Defensively, our movement was much better. It’s these kind of things we are working on getting better at.”

$300,000 available in relief grants for businesses and nonprofits in Morrow County

By the Way: Chamber of commerce adjusts Veterans Day plans