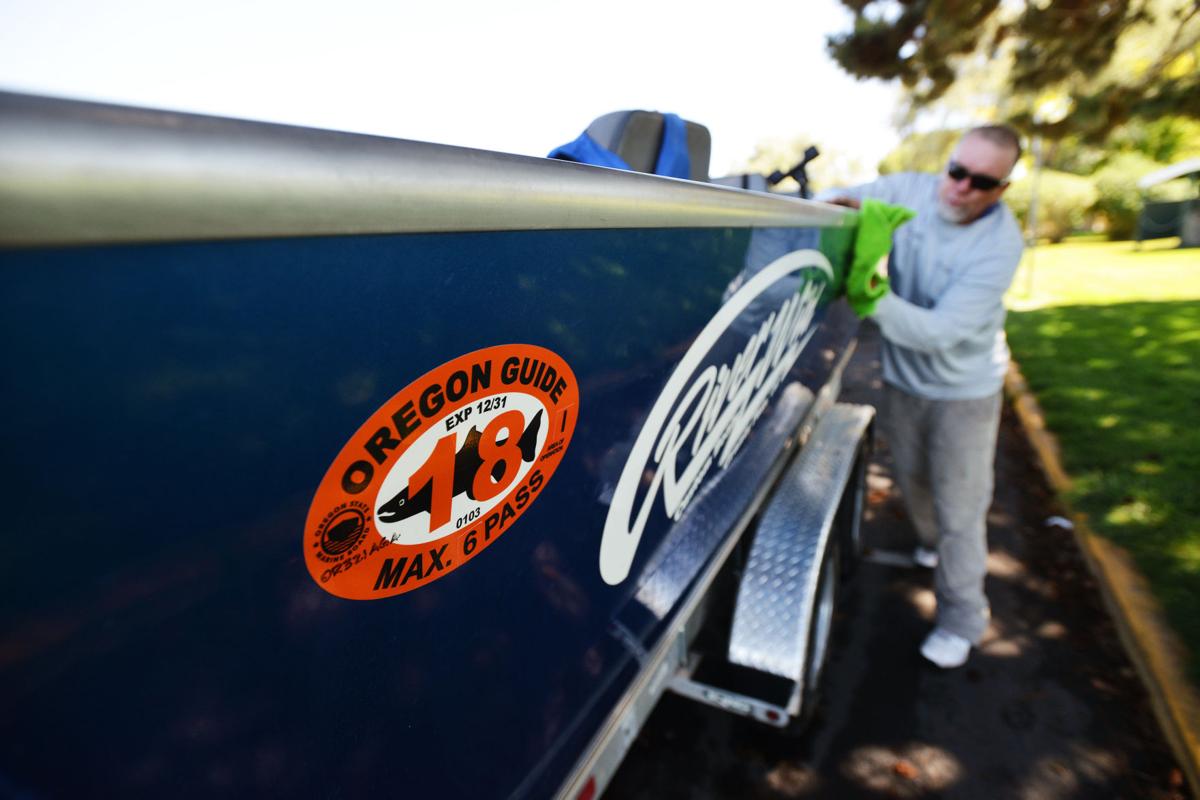 Fishing guide Kimo Gabriel wipes down his boat after returning from a fishing trip Wednesday in Boardman. 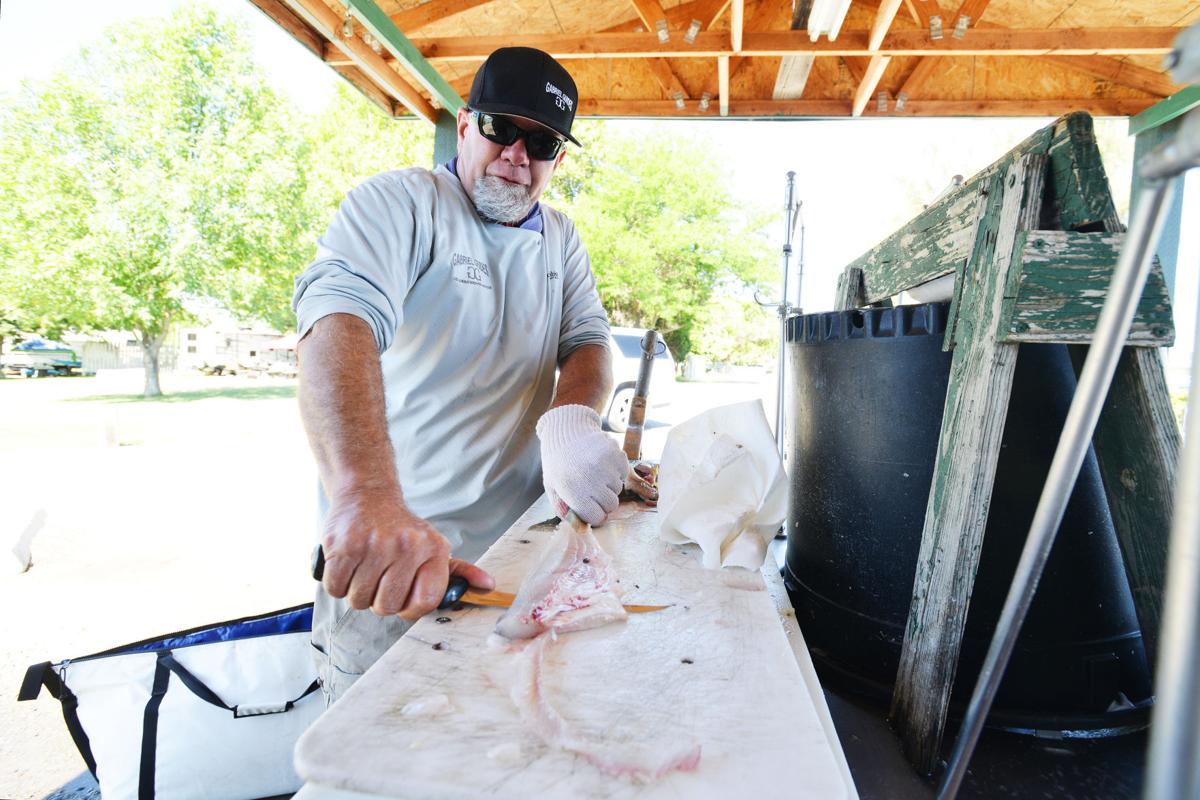 Fishing guide Kimo Gabriel cuts a fillet while cleaning walleye for a customer Wednesday at the Boardman Marina. 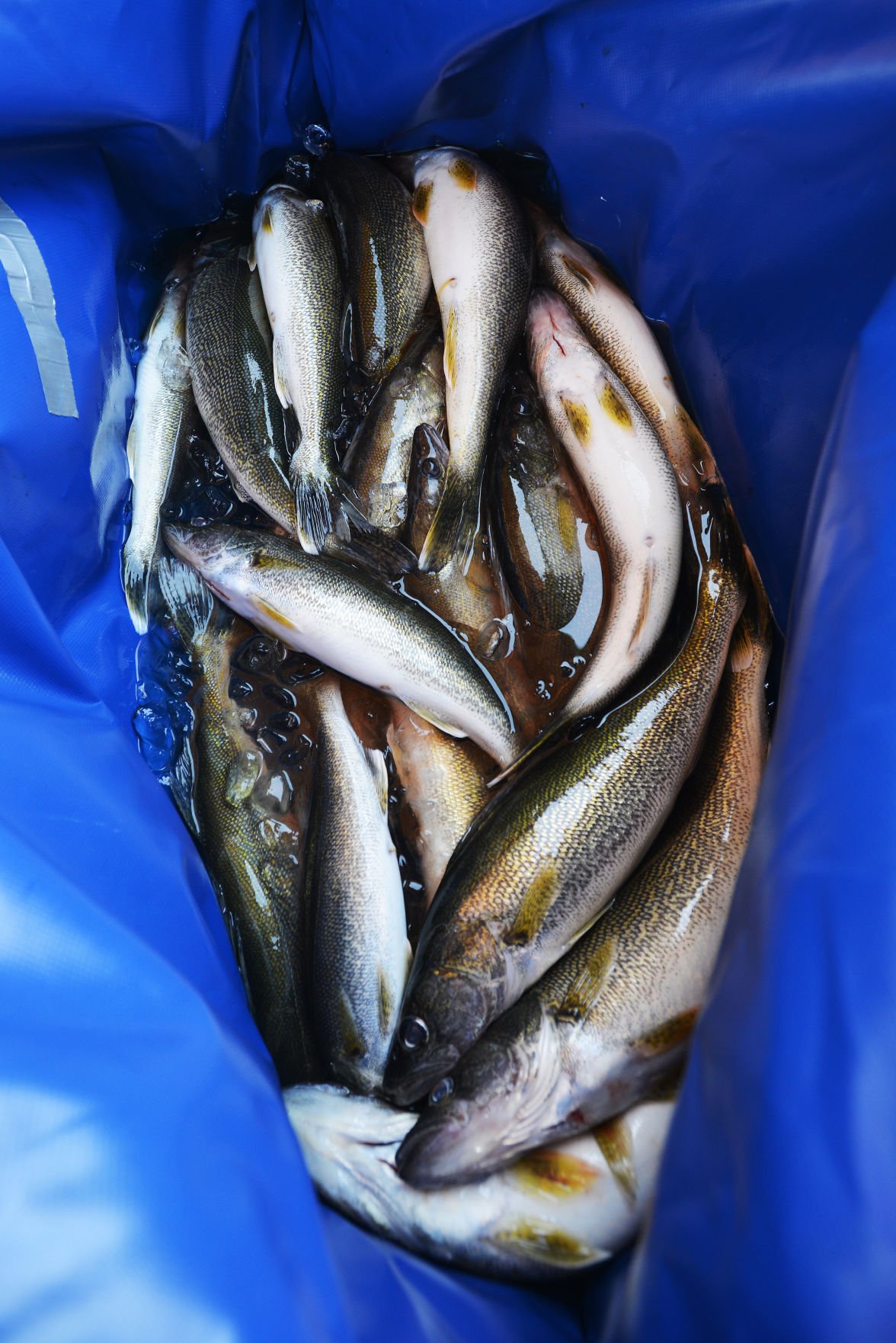 The haul from a days worth of fishing walleye on the Columbia River on Wednesday out of Boardman.

Fishing guide Kimo Gabriel wipes down his boat after returning from a fishing trip Wednesday in Boardman.

Fishing guide Kimo Gabriel cuts a fillet while cleaning walleye for a customer Wednesday at the Boardman Marina.

The haul from a days worth of fishing walleye on the Columbia River on Wednesday out of Boardman.

Fisherman uses experience, knowledge for ultimate day on the river

Long-time fishermen John and Ray have set out on the Columbia River many times before.

When it’s just the two of them, they often come up short or even leave empty-handed. But with the help of a local guide, Wednesday evening each fisherman took home a gallon Ziploc bag full of walleye fillets — cut and cleaned by the expert himself.

Kimo Gabriel is in his 11th year as a guide. His business, Gabriel Guides, has taken mostly novice anglers as far as 40 miles out on the Columbia River in search of walleye.

After he relocated to Hermiston from Selah, just north of Yakima, Washington, Gabriel began the guide service after success on the tournament fishing circuit. He has used Gabriel Guides to supplement his income as a science teacher at Sandstone Middle School in Hermiston, a 32-year career from which he is retiring from this year.

“The success in the guiding made it easier to step away,” Gabriel said. “This is a pretty good supplementary income, and it’s nice being your own boss. It’s nice, you know, where I can’t pick and chose who and what I deal with at school, I can pick and chose here.”

Until now, Gabriel’s choices were limited. He would come out most weekends and a few months in the summer. When it would get closer to the start of school, Gabriel had to prepare a classroom and come fall, he would hardly touch the river.

“Usually around June it starts to pick up and in July I fish every day,” Gabriel said. “In August, I fish half of August or more and then school starts. It feels like I really have to jam a bunch of fishing into a short period of time.”

Now that Gabriel’s teaching will move from the classroom to strictly the river, he’s looking forward to growing the business, which has hosted clients from as far as Montana.

What attracts even experienced anglers is the abundance of walleye and the opportunity to even catch salmon, steelhead and sturgeon, but even with the increasing number of guides — experience and knowledge show on the river.

“The fish just aren’t from bank to bank,” Gabriel said. “They are in real specific spots and sometimes it’s just a matter of 10 or 15, 20 feet — moving one way or the other makes all the difference.”

Gabriel is very familiar with the Columbia River. Even before making Eastern Oregon his home, him and his father would make the nearly 200 mile round trip to the 1,243 mile long river. Gabriel’s earliest memories where fishing for catfish on the weekend, but his dad remembers another time when Gabriel was just three years old.

“It seems like every time I talk with my dad, he brings it up,” he said. “My dad is 96 and he likes to reminisce about fishing. He keeps reminding me that when I was about three years old, we were fishing below the Wickiup Reservoir over in Central Oregon and he says that he put some kind of bait on the line for me, I threw it out — and he was fishing his own line — and said I started yelling to him, ‘Daddy, daddy, daddy,’ as a six-pound brown trout was dragging me into the river.”

Now Gabriel commands the water, bringing in haul after haul with his clients. Each person is limited to 10 fish apiece, which is a limit that is often exceeded causing anglers to release their catch.

On Wednesday, the three-man crew reached their limit fairly early and decided to take the water to fulfill their allotted time.

“It’s an eight-hour day unless people get to the point where they are like, ‘Man, this is too hot,’ which happens a lot, or they catch what I consider their limit and sometimes they are happy with that and want to come in,” Gabriel said.

The early wake up call, around 6 or 7 a.m., is followed by a usually unpredictable day on the water. Gabriel always starts at the Boardman Marina and will continue down the river “until somethings happens,” as he says.

“Sometimes it doesn’t happen until I get down to Crow Butte,” he added. “Today they were biting really well real close, we didn’t have to go anywhere really.”

Location, current, water temperature and food are key in Gabriel keeping clients happy, and at $200 a pop, they are mostly paying for the experience.

“It’s getting real competitive and if you don’t know what you’re doing, it’s going to show. It’s quite a learning curve,” he said. “If you know what to look for in a current, you can find the fish, I think. Once you do it for so long it starts to become second nature but then again, I know what I’m looking for.”