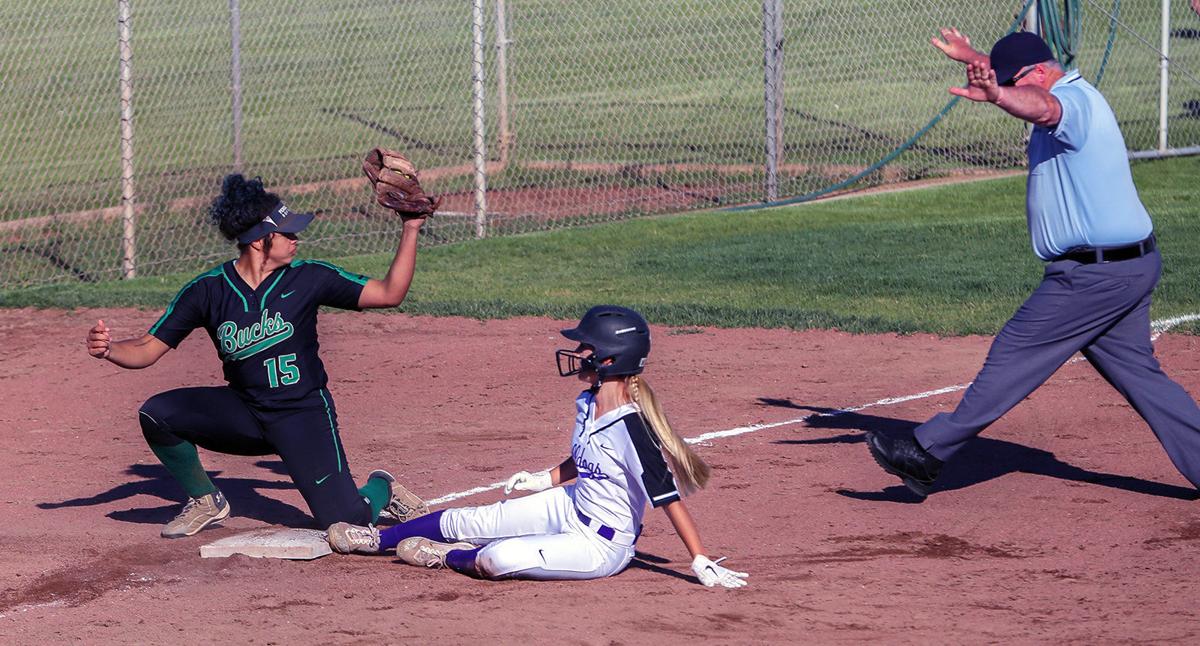 Pendleton third baseman Kalan McGlothan looks in disbelief at the umpire who signals that Hermiston's Kylie Green is safe during Friday's league finale. 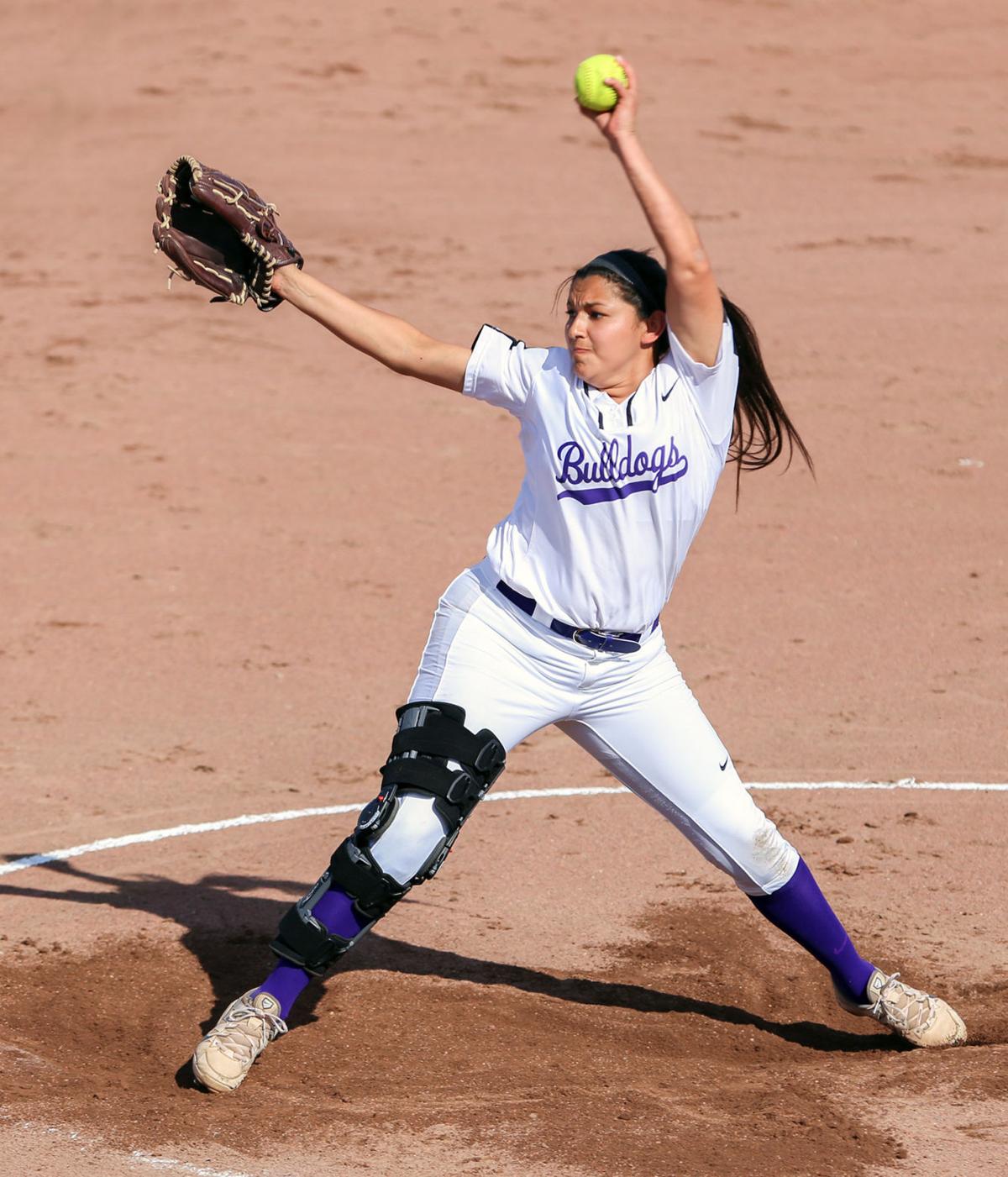 Pendleton third baseman Kalan McGlothan looks in disbelief at the umpire who signals that Hermiston's Kylie Green is safe during Friday's league finale.

HERMISTON — Bailee Noland could feel the nerves running through her body as she stepped to the plate in the bottom of the seventh inning.

With two outs and her Hermiston team trailing 4-3 to its rival Pendleton, Noland, a sophomore, glanced at the diamond to see the tying run standing on third base and the winning run at second base. She stepped in the box to face Pendleton’s all-state pitcher Lauren Richards, with a great amount of pressure riding on her bat.

After watching a first-pitch fastball sail down the middle of the plate, Noland locked in on the next pitch. She then unloaded a big swing and thumped the ball back up the middle, skipping just under the glove of Richards and rolling into the outfield. After rounding first base, Noland gave a big fist pump as she watched Kalei Smith and Sydney Stefani come across to score to give Hermiston a 5-4 walk-off victory — its first win over Pendleton since May 8, 2012, a span of 24 consecutive games.

“I’m so choked up right now, it’s so awesome,” said Noland, who was in elementary school during Hermiston’s previous victory over Pendleton. “I’m just excited that our team, like all of us pulled together and we played with more heart than anything. And when Sydney crossed the plate, my whole heart just dropped. And then my team was running after me and I just knew that we finally did it. We beat Pendleton.”

Noland has been one of the top hitters and run producers for the Bulldogs (15-9 overall, 6-6 Columbia River Conference) this season, settling into the No. 3 spot in the batting order. When Noland batted in the seventh, though, she was 0-for-3 on the day — but head coach Kate Greenough had no doubt that Noland could come through.

“She is so competitive and she will do anything; she can to give you her best,” Greenough said. “She’s had so many roles to fill on this team, but she just says ‘OK coach’ and she will do whatever she can. I think her teammates love that. She’s awesome.”

Hermiston’s seventh-inning rally got started with Smith’s one-out single, followed by Stefani reaching on a Buckaroo (23-2, 11-1) error to put the winning run on base. Sam Atilano then followed up with a perfect sacrifice bunt, which brought Noland to the plate.

“We just told them to stick to our plan,” Greenough said. “We talked all week about making plans in your at-bat, and those last four kids completely bought in to what they needed to do.”

Pendleton’s offense was rather lethargic for most of the game, with five of the seven innings seeing four batters or less at the plate. The Buckaroos did score the first runs in the game in the third inning on an RBI single by Richards and a two-run home run off the bat of Kalan McGlothan for a 3-0 lead.

Hermiston then got its offense going and tied the game in the fourth inning on a two-run double by Jannelle Almaguer and a RBI single from Kylie Green. The Buckaroos took the lead right back in the fifth when Kirah McGlothan scored following a groundout to shortstop from Alexi Brehaut for a 4-3 lead.

But for the most part, the bats were stymied by Hermiston pitching. Noland picked up the win in the circle as she threw three innings of shutout relief with only one hit allowed. She gave up a one-out double in the seventh to Kirah McGlothan, but stranded her with a strikeout and a groundout to end the inning.

Noland relieved senior Julissa Almaguer, who returned Friday after missing most of the season with a knee injury and tossed four innings with three strikeouts and allowed four runs. Greenough was thrilled to see Almaguer back in the circle, on senior day no less.

“This team trusts her so much and it’s nice to see them relax when she can play for them,” Greenough said. “Just having her back whether she’s full-go, whether she’s a little here and there, she’s just so valuable to this program.”

The loss for Pendleton also snaps its 22-game win streak this season, though coach Tim Cary did not appear to be too upset with the defeat.

“It might be the best thing for us,” Cary said. “I think that our focus in practice has been kind of ho-hum; I think things have been relatively easy for us for quite some time and sometimes when you win, win, win you forget you have to work hard for it.

“This might be good to get us refocused, get back to hard work and understand that anybody can beat any team on any given day, and Hermiston proved that today.”

It’s a momentous win for the Bulldogs, who will hit the road next week for a road play-in game, the kind of win that can lift a team to do some special things in the postseason. But until then, the Bulldogs are going to enjoy the long-awaited victory over Pendleton.