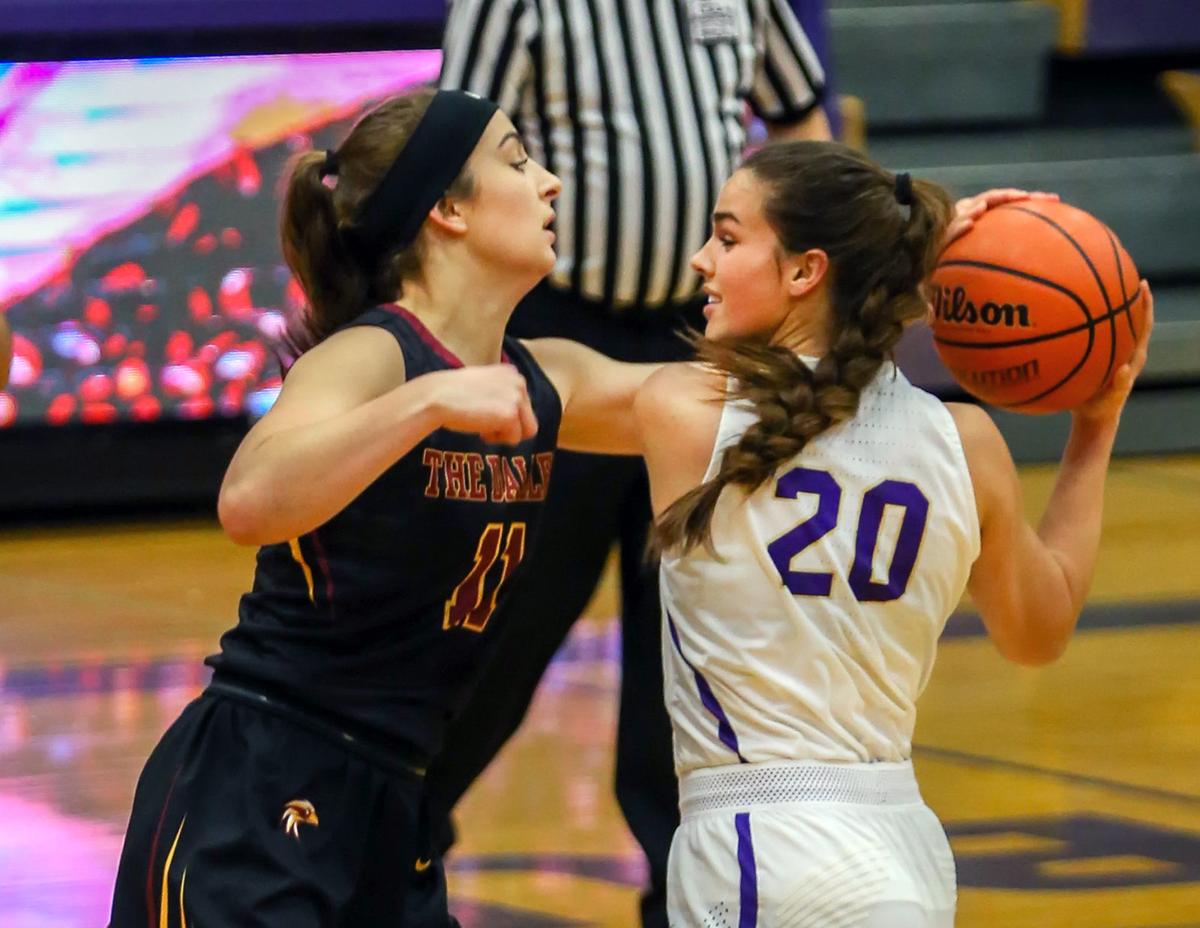 Hermiston's Maddy Juul (20) and Jodi Thomasian (11), of The Dalles, battle for the ball Friday evening in Hermiston. 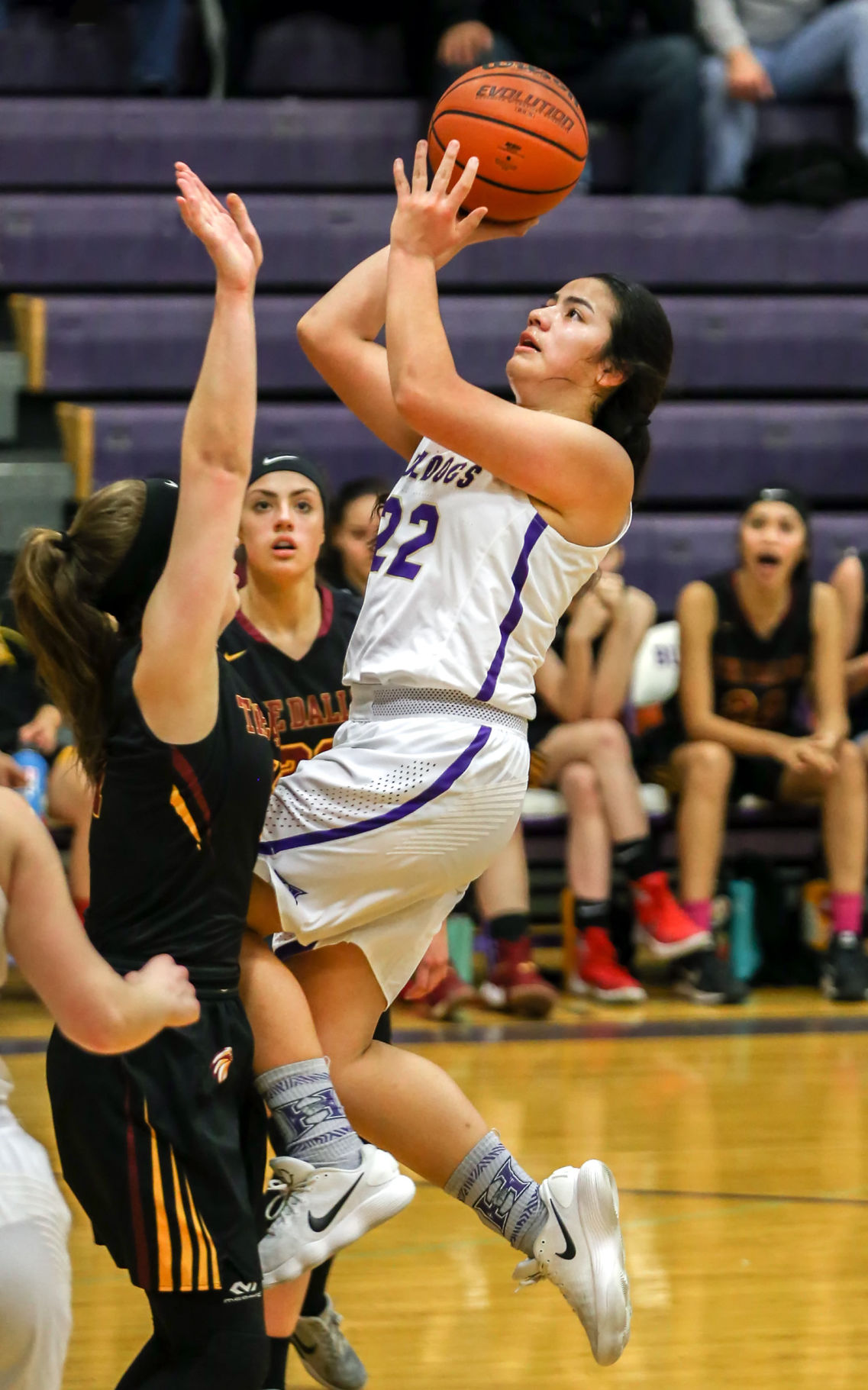 Hermiston's Jazlyn Romero (22) goes up for a shot during Friday's game against The Dalles. 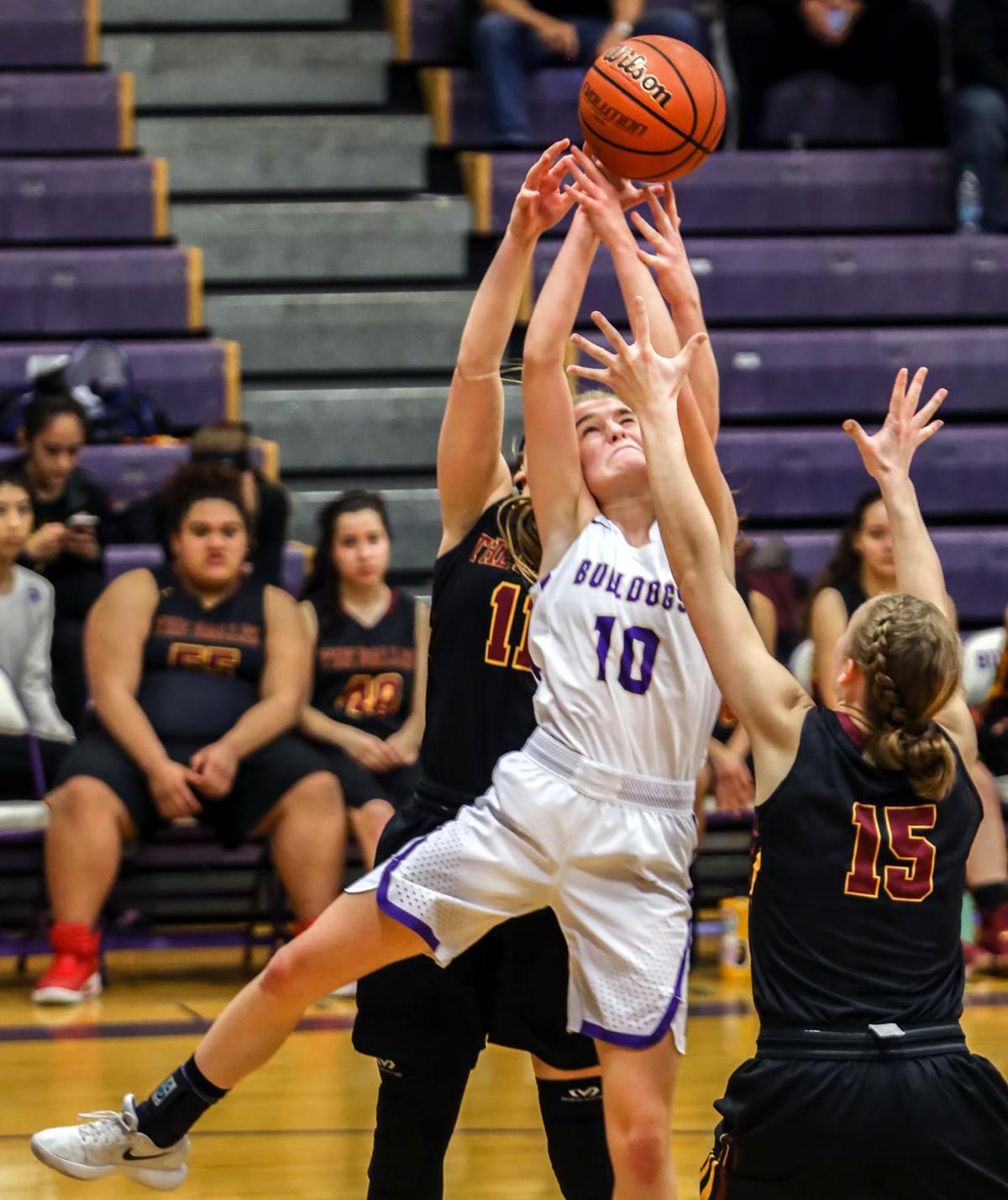 Hermiston's Jayden Ray (10) fights Jodi Thomasian (11) and Bailey LeBreton, of The Dalles, for a rebound during Friday's game.

Hermiston's Maddy Juul (20) and Jodi Thomasian (11), of The Dalles, battle for the ball Friday evening in Hermiston.

Hermiston's Jazlyn Romero (22) goes up for a shot during Friday's game against The Dalles.

Hermiston's Jayden Ray (10) fights Jodi Thomasian (11) and Bailey LeBreton, of The Dalles, for a rebound during Friday's game.

HERMISTON — After the Hermiston girls basketball team dropped its first league game to Pendleton on Jan. 30, the Bulldogs needed to quickly shift gears and prepare to welcome another Columbia River Conference opponent Friday.

For the fans that were in the stands at the Dawg House for Hermiston’s two home games last week, their blood pressure likely rose as the visiting schools kept things close against the Bulldogs.

Last Tuesday, in the final three minutes of play, the Bulldogs (6-12, 2-1) came close to having the advantage over the Buckaroos by tying the score again at 45-45 with 58.7 left. But the Bucks were able to make some last second baskets from the charity stripe to stretch their narrow lead. Pendleton defeated Hermiston 49-45 to move the Bulldogs to 3-1 in league.

On Friday night, however, Hermiston was able to stop two of The Dalles’ big runs to hold on for a 52-46 victory.

Now more than a third of the way through CRC play, the Bulldogs (7-12 overall) will take any win they can get — even if it’s not the prettiest.

“You could definitely tell there was a little bit of a hangover (from Tuesday),” head coach Juan Rodriguez said. “There was a lot of disappointment where we played a pretty good game and just didn’t finish the game off and you could tell that tonight.

“It’s a little bit of a trap game when you beat a team by 30 the first time at their place and you’re coming off a tough loss, and you end up playing like that.”

Hermiston entered the third quarter up 25-16 after a 13-4 run left the Riverhawks (6-12, 0-4) in the dust. But The Dalles seemed to have left its shooting woes in the locker room and came out firing, hitting three consecutive 3-pointers — all off the hands of senior Paulina Finn.

Then with three minutes left in the third, fellow senior Jodi Thomasian did a spin move around her Bulldog defender for a lay-in that put the Riverhawks within two possessions of their first lead of the night.

The Dalles wouldn’t get that close to Hermiston again until two minutes into the fourth quarter. Another three, this time by junior Molly Taylor, put visitors within one point of Hermiston.

The narrow 37-36 lead was extended when the Bulldogs outscored the Riverhawks 7-2 over the next three minutes. But The Dalles weren’t done yet.

With 2:14 left in the game, The Dalles would once again come close to finally topping Hermiston.

Sophomore Jazlyn Romero made a falling lay-in to put the Bulldogs up 46-41, but Thomasian answered with a layup of her own as she waited inside for a between-the-legs pass that put the Riverhawks back within one possession.

A solid defensive performance and four made free throws from Romero sealed the deal for Hermiston, but the win wasn’t an easy one to come by.

Friday, the winter flu bug caught up with some players and regular starter, junior Maddi Wilson had to sit out.

“Defensively, we had to change stuff up because Maddi Wilson wasn’t playing,” Rodriguez said. “Maddy Juul had to play a lot more minutes than I wanted her to and she can’t guard on the perimeter as well as Maddi Wilson can and we had to play a little bit of a zone for most of the game, which gave them open shots.”

The Riverhawks ended with eight three’s and were led by Thomasian, who had 14 points on the night. Finn was the only other player to score in double digits for The Dalles, cashing in four three’s for 12 points.

Romero led the Bulldogs’ efforts with a game-high of 19 points. Junior Jordan Thomas chipped in 15.

Hermiston started its three-game away trip on Tuesday with a stop in Hood River. Results of the game were not available by press time.

Protests over George Floyd's death spread to Hermiston and Pendleton