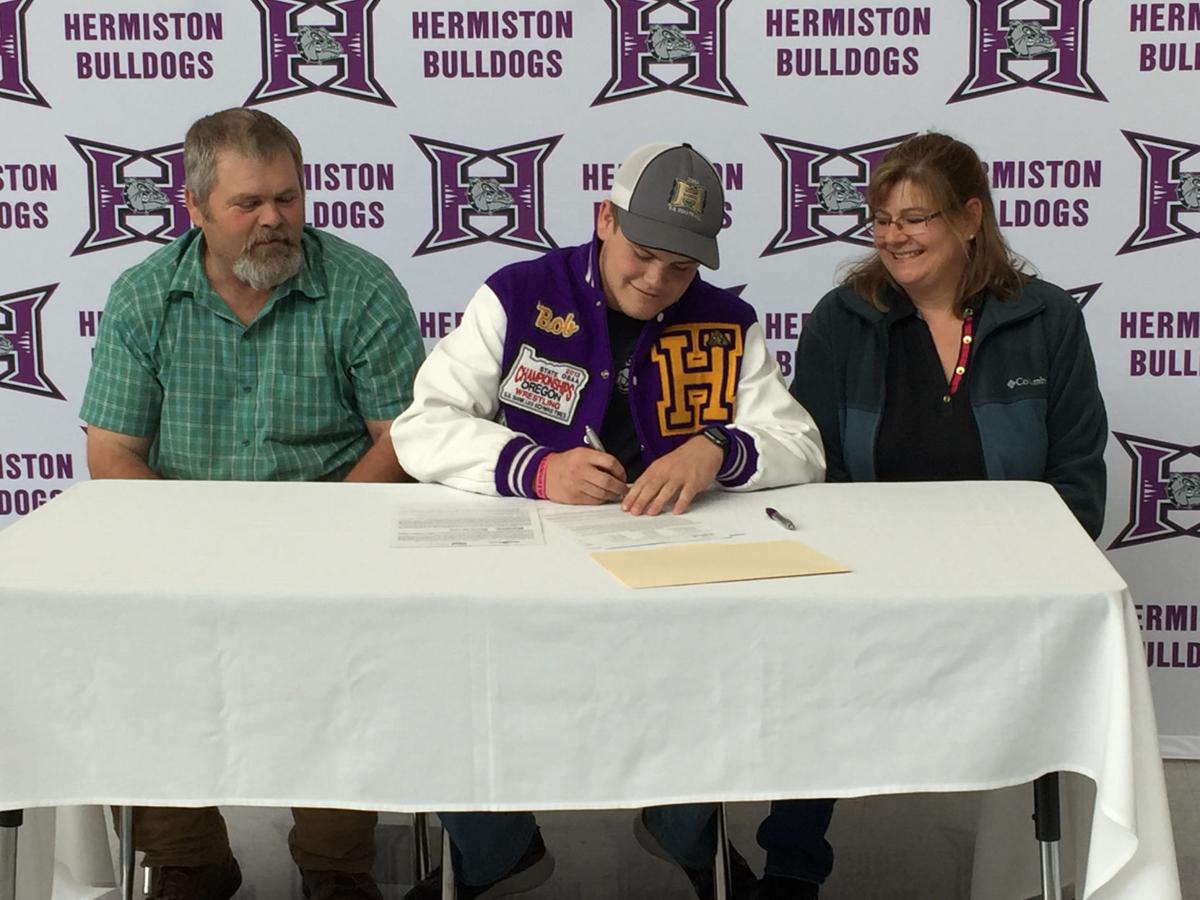 Staff photo by Eric Singer Hermiston senior Bob Coleman, center, signs his National Letter of Intent with Oregon State University as his father Craig, left, and mother Janna, right, look on during a ceremony on Wednesday at Hermiston High School. 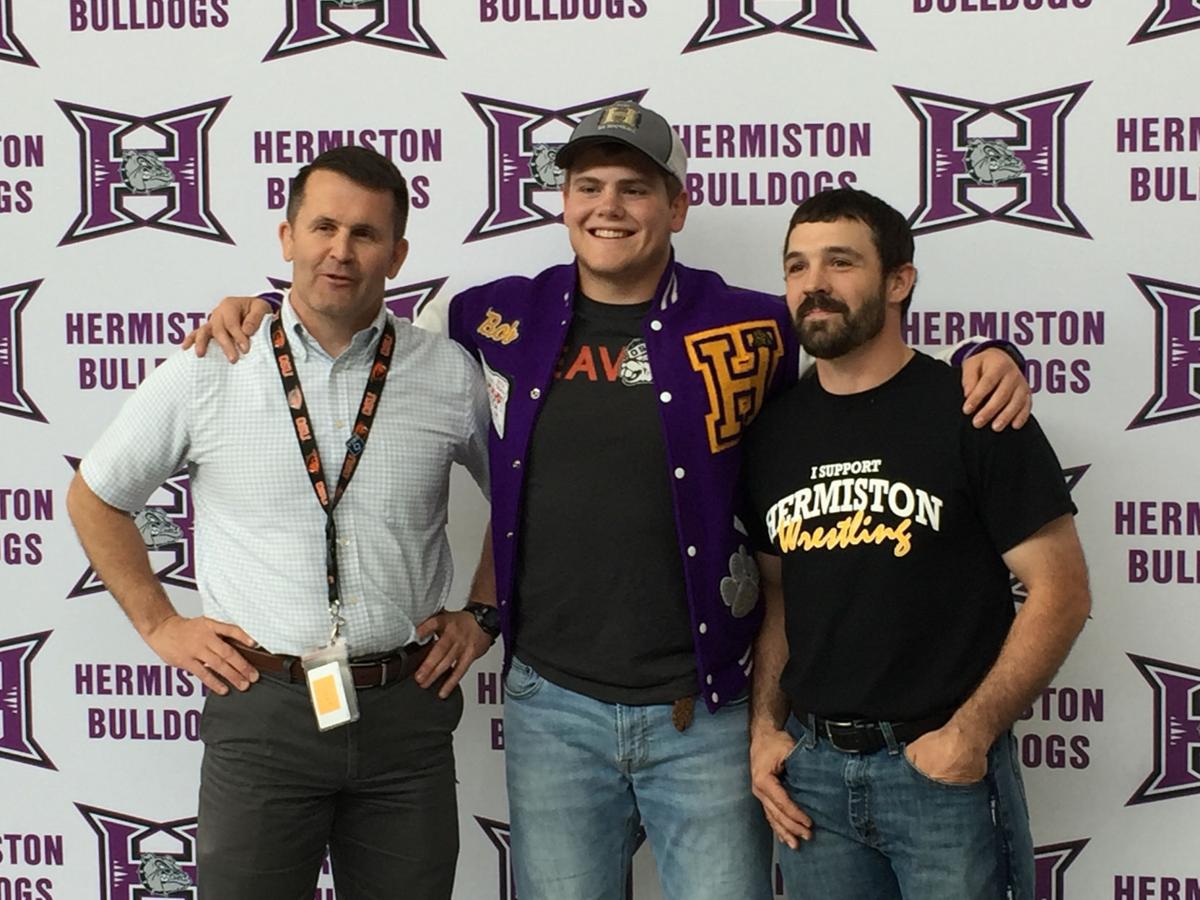 Staff photo by Eric Singer Hermiston senior Bob Coleman, center, signs his National Letter of Intent with Oregon State University as his father Craig, left, and mother Janna, right, look on during a ceremony on Wednesday at Hermiston High School.

HERMISTON — Feb. 28 proved to be a life-changing evening for Bob Coleman.

Facing off against Central’s Tanner Swinehart in the 170-pound 5A wrestling championship, Coleman was deadlocked in 2-2 battle for the bulk of the match, but with 40 seconds left Swinehart earned a takedown for two points and the victory. The heart-breaking loss forced a change in the way Coleman approached the sport and his mindset in competition that led to success as a senior.

Coleman will now have the opportunity to compete against that top-level talent he seeks as the senior signed his National Letter of Intent with Oregon State University under a partial scholarship on Wednesday afternoon at Hermiston High School. He said that he is disappointed to watch his high school career come to a close, but is excited that his next step is now complete.

“Financials I’d have to say (is the biggest),” he said. “It’s a big school and I wanted to go to a big school and I wanted to wrestle Division I, I didn’t want to go to an NAIA first or something like that. And I think with that in mind and to wrestle with (former Hermiston teammates Abraham Rodriguez, Joey Delgado, Hans Rockwell (from Riverside), kids like that from the area that I know it kind of gives a home feeling to a big change and that’s something that’s big to me.”

He adds to the list of Eastern Oregon transplants on the Beavers squad, joining Rodriguez, Delgado and Rockwell and said that the number is a testament to the state of the sport on this side of the state.

“It’s crazy, we have a lot of guys that are doing a lot of great things and the population isn’t nearly as big,” he said. “It’s a big ‘Atta boy’ to our coaches too for getting us to that level to be able to compete in a Division I program and it kind of puts us on a map over here.”

Wrestling first came into Coleman’s life in elementary school, but what kept him coming back each year was the family feel that the Hermiston program gave him. Coleman added that some people often wonder if he is crazy for going through the rigorous training to be successful in the sport, but said he finds it the most rewarding feeling in sports.

“Practices are killer, but I enjoyed them because I was there with really good friends and we were having fun,” he said. “You go to practice after not eating that day and you’re stomach hurts and you’re thirsty and the cottonmouth is disgusting and you can’t breathe, and it’s a grind and doing it day after day with almost the same people makes it almost the most rewarding sport because in my opinion.”

Coleman was an integral part of the Bulldogs’ state champion teams in each of the last four years, and capped off a senior season with a 39-2 overall record and a 5A state championship at 182 pounds. He was thrilled to earn the title, but says he has bigger things in mind for himself now.

“It’s just kind of a check mark for me,” he said. “I mean it was definitely something I wanted to do and I knew I just had to show up and do it. I’ve been wrestling since third grade and it would be kind of sad to go all the way through and not win a title, so it’s good to say I’ve done it.

“But I think I have bigger goals in mind, like wanting to wrestle in college and be successful there and not just be on the team for four years, so that’s hwere my sights have been set.”

While at Hermiston, Coleman was more than just an athlete as well. He was heavily involved with various student clubs and sports, which include serving as the ASB Leadership president this year. However, he said the thing he’s most proud of is completing his Eagle Scout project within the Boy Scouts of America — something many people did not know he was involved with.

“I think succeeding and getting through and becoming an Eagle Scout is a major thing for me because it taught me a lot of life skills that sports wouldn’t have taught me,” he said.

He plans on studying Agricultural business at Oregon State, as well as extensive work with the Spanish language, but isn’t sure of his plans beyond that.

“Anything in the (agricultural) industry, Spanish is kind of integral nowadays,” he said. “I don’t know what I want to do (after that), maybe come back to the area here and do something.”

For now, Coleman will spend his final 10 days as a Hermiston High School student just like any other senior.