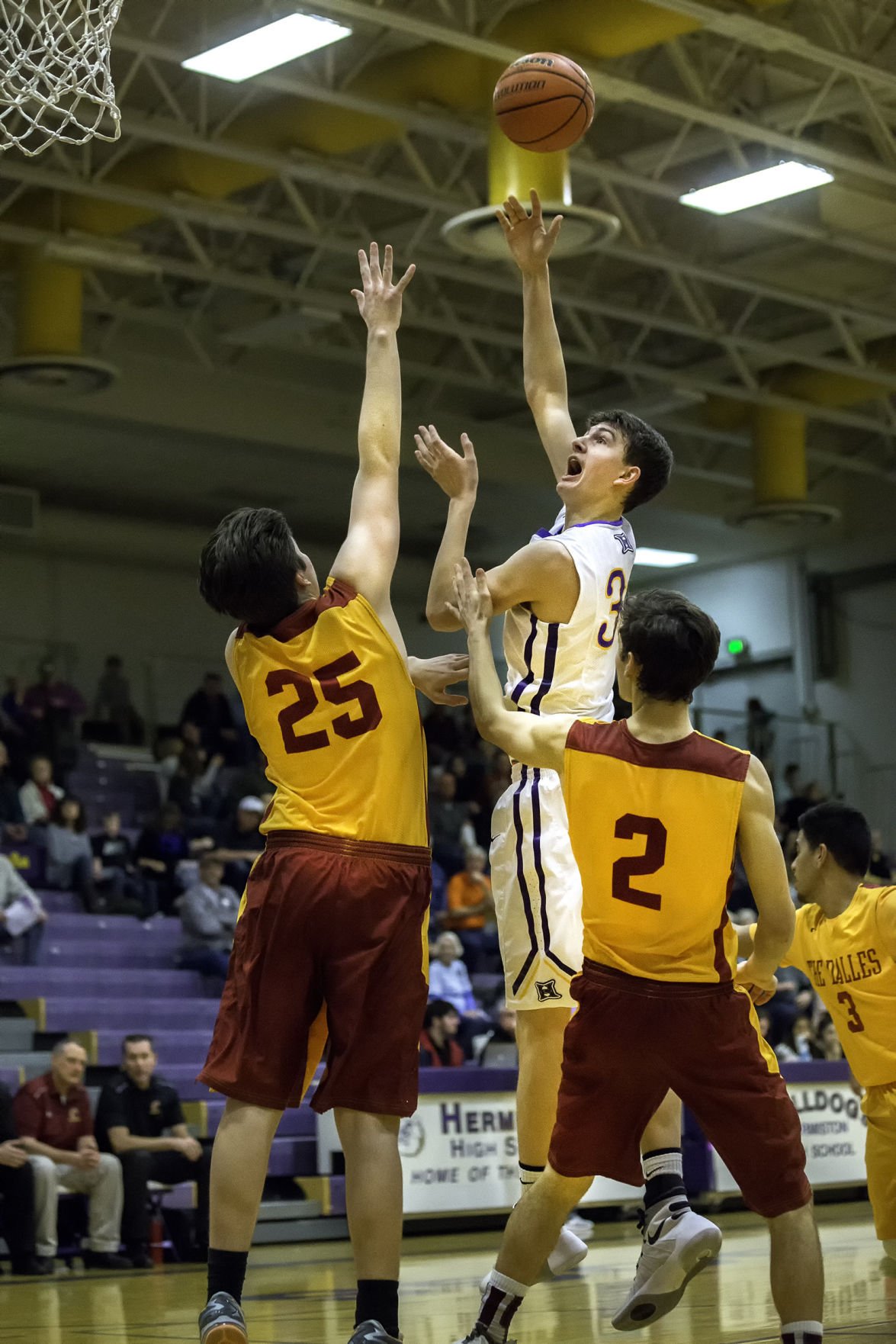 The Dawgs' Preston Peterson (35) shoots under pressure from William Justesen (25) and Colin Noonan (2), of The Dalles, during Friday's Columbia River Conference game in Hermiston. 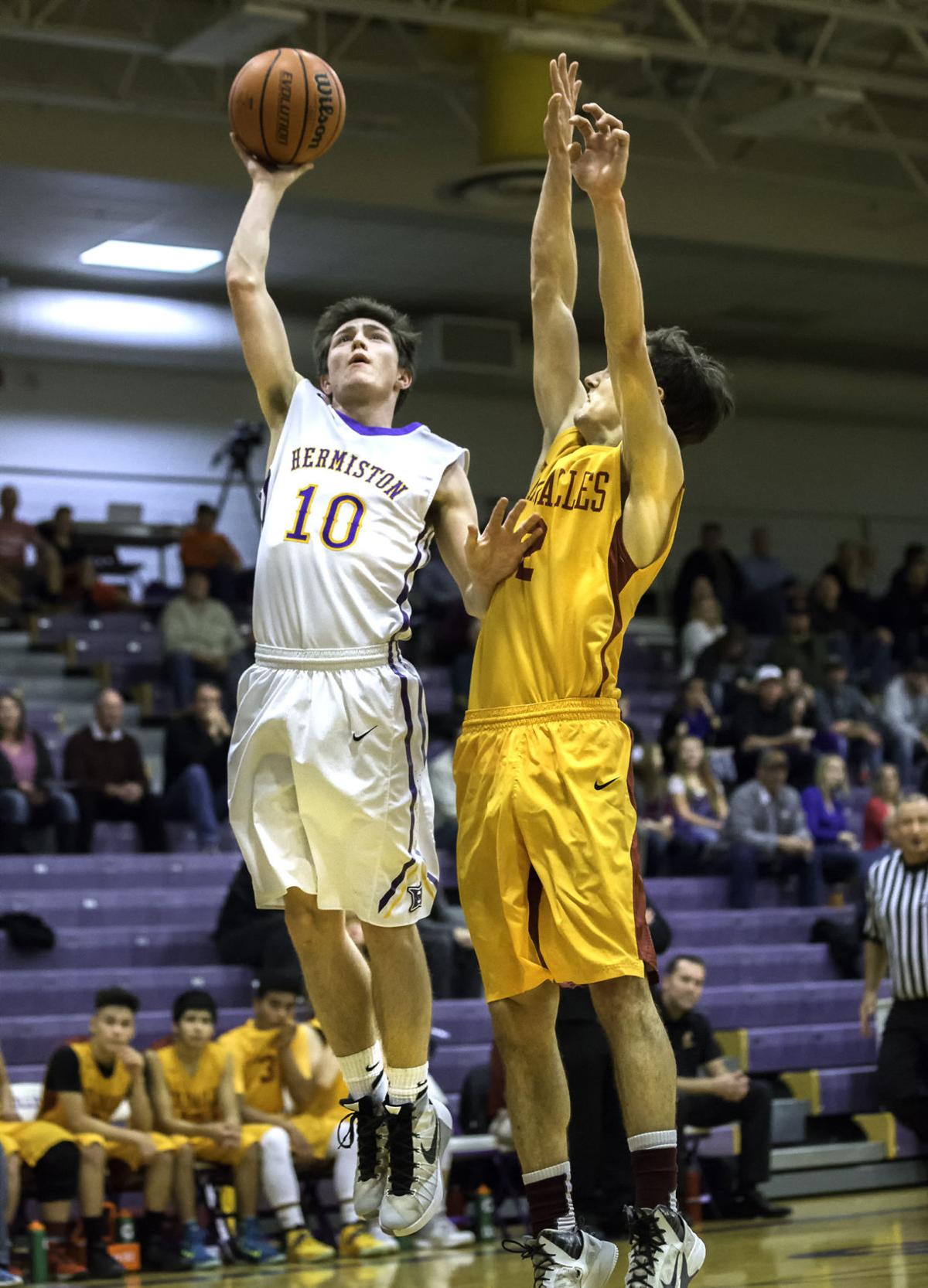 The Dawgs' Austin Naillon (10) goes up for a shot as Colin Noonan (2), of The Dalles, defends during Friday's Columbia River Conference game in Hermiston.

The Dawgs' Preston Peterson (35) shoots under pressure from William Justesen (25) and Colin Noonan (2), of The Dalles, during Friday's Columbia River Conference game in Hermiston.

The Dawgs' Austin Naillon (10) goes up for a shot as Colin Noonan (2), of The Dalles, defends during Friday's Columbia River Conference game in Hermiston.

Despite having the fourth-most total points entering Friday’s Columbia River Conference opener against The Dalles, Hermiston boys basketball coach wanted to see more scoring from his bunch of Bulldogs.

Friday night, he got his wish. Hermiston exploded for 34 third-quarter points behind 19 of 23 points from Chance Flores and eight 3-pointers made in total, and the Bulldogs set a season-high in points in a 78-44 drubbing of the Riverhawks at The Dawghouse, eclipsing the previous season-high of 74 totaled in back-to-back games — on back-to-back days — in early December.

“I think that’s what we’re capable of doing,” Ego said of the scoring outburst.

Ego has said on several different occasions he thinks Flores is his team’s best shooter. The junior, who sat most of the first half with three fouls, erupted in the third quarter.

Flores was on the bench midway through the first quarter when he picked up two fouls within 19 seconds of each other, and picked up his third just 40 seconds into the second quarter, forcing him to the bench.

“Oh, I don’t know if it was a problem for us because he had some kids come in and play pretty well,” Ego said of Flores’ foul trouble. “Hunter Walls came in and played well. Preston Peterson played well tonight at times, particularly defensively and helped us get defensive stops.”

“(The basket) just kept getting bigger and bigger as it went,” Flores said of his monster third quarter. “They just were falling tonight and it felt good, so I kept letting it fly.”

It wasn’t always so easy, though.

Hermiston limped to a 16-13 first-quarter lead on 6-16 shooting, and started to stretch it toward the end of the first half. Up 21-20 with 2:50 on the clock, Hermiston began a 12-2 run that lasted the rest of the quarter and put the Bulldogs up 33-22 at the half. Cesar Ortiz made his biggest contribution during the run, scoring eight points on two 3-pointers after missing on all his field goal attempts in the first half.

“Everything was in and out,” Ego said of Ortiz.

With the convincing win, Flores said there is reason for confidence, but also reason to temper the optimism.

“You just gotta remember we have to go to their house, and that’s a tough place to play, Ego said. “We just have to make sure we come out with the same kind of effort we had here.”