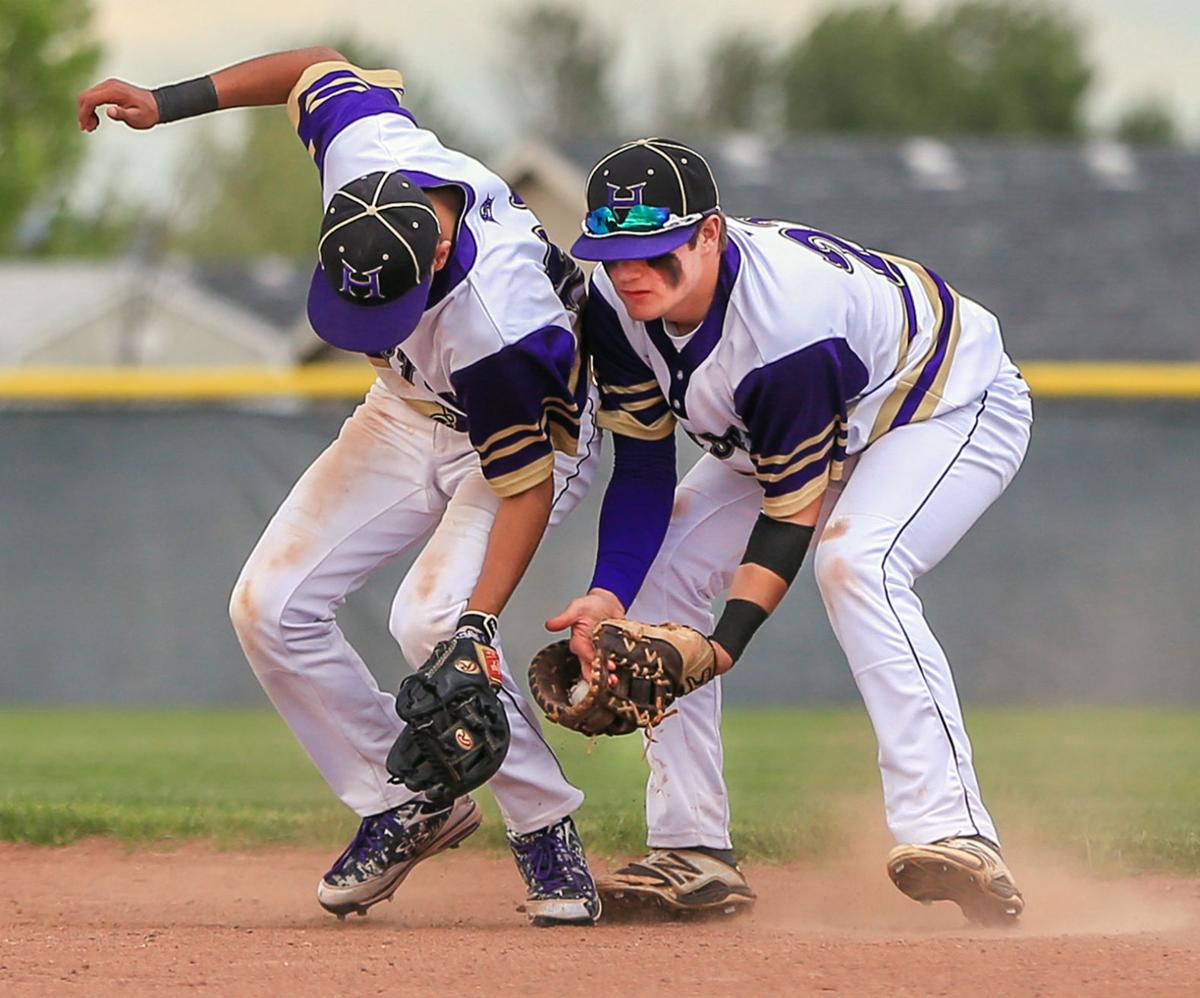 Hermiston's Jordan Ramirez and Kaden Caldwell converge on the ball in right field during Friday's game against Hood River Valley at the Armand Larive baseball field. 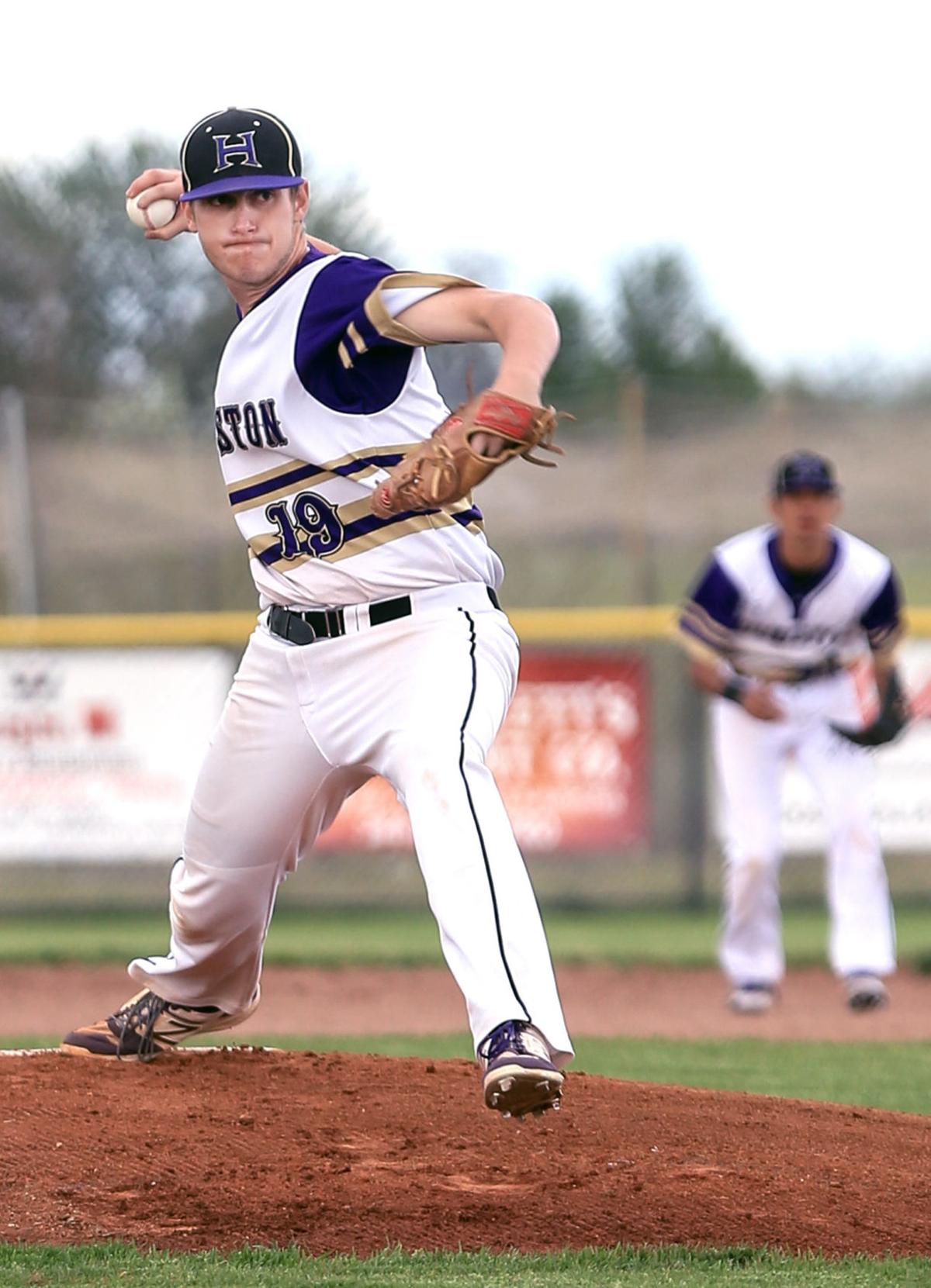 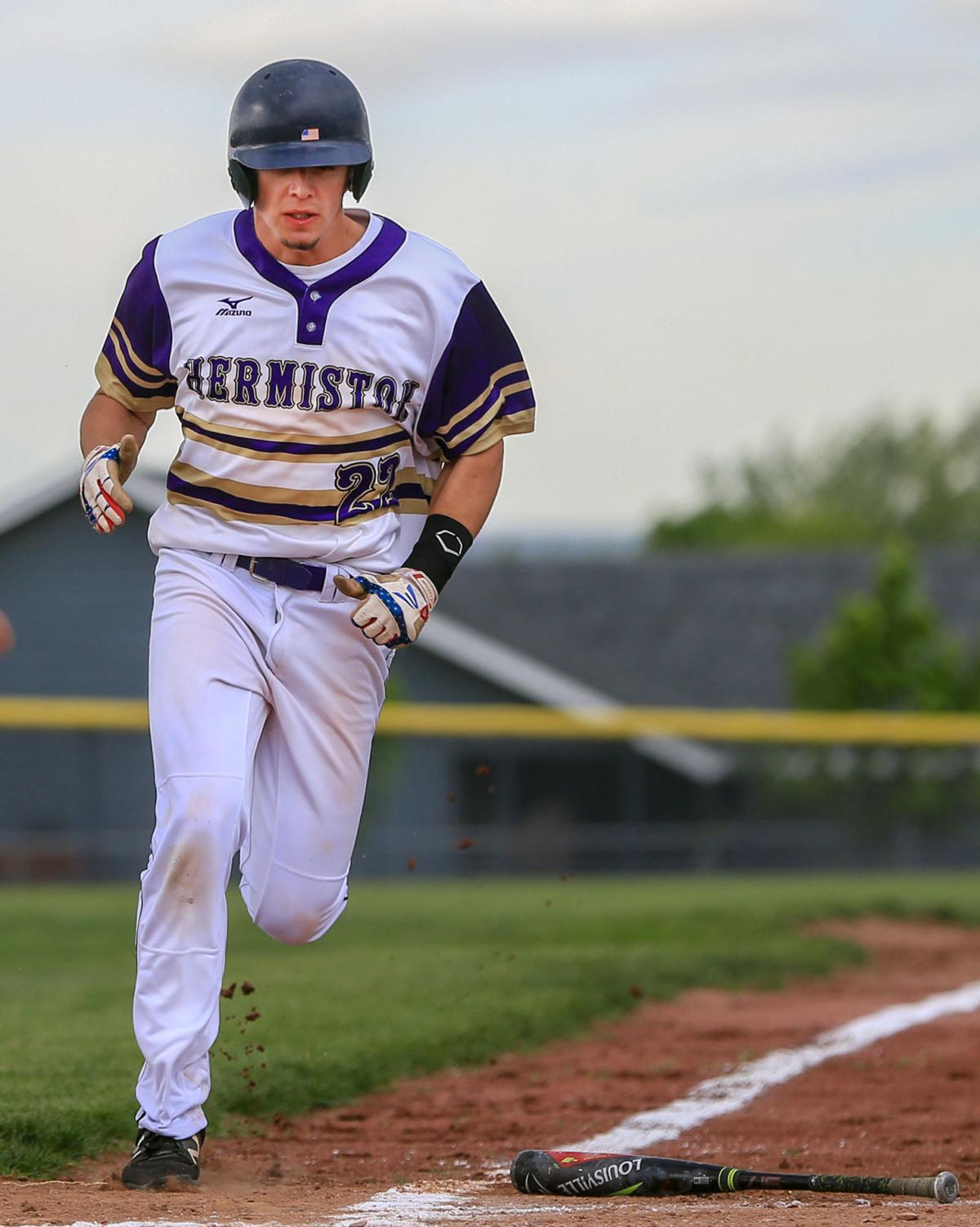 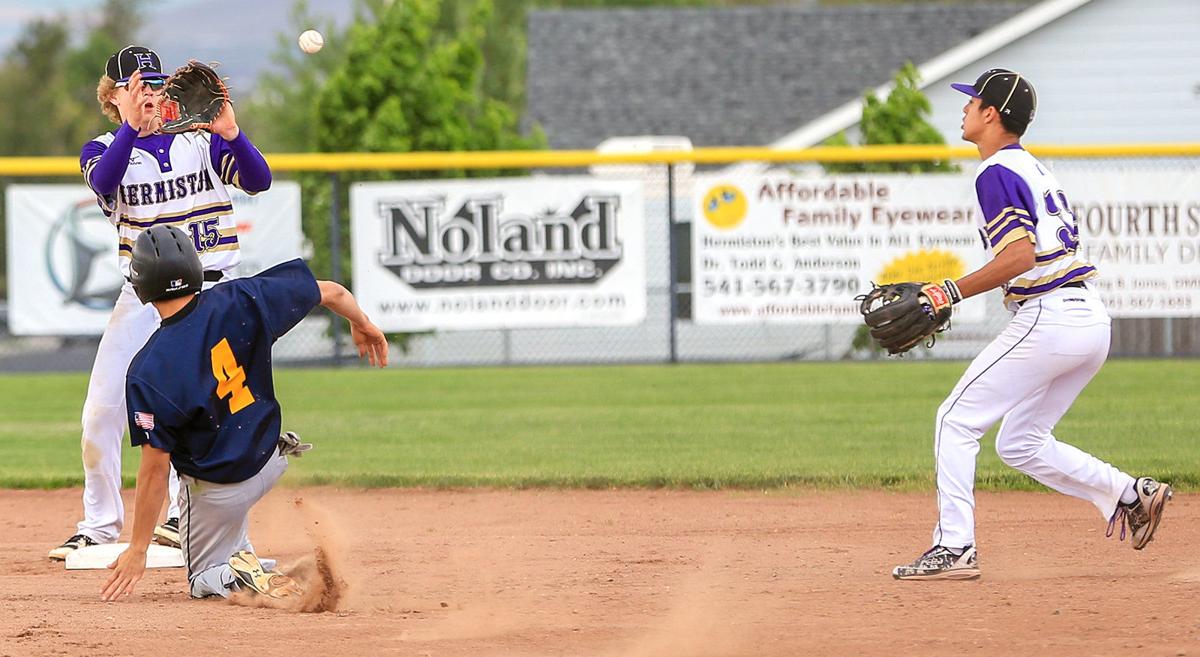 Hermiston's Caden Schwirse fields a throw from teammate Jordan Ramirez as Lucas Viuhkol, of Hood River, slides into second base during Friday's game at the Armand Larive baseball field. 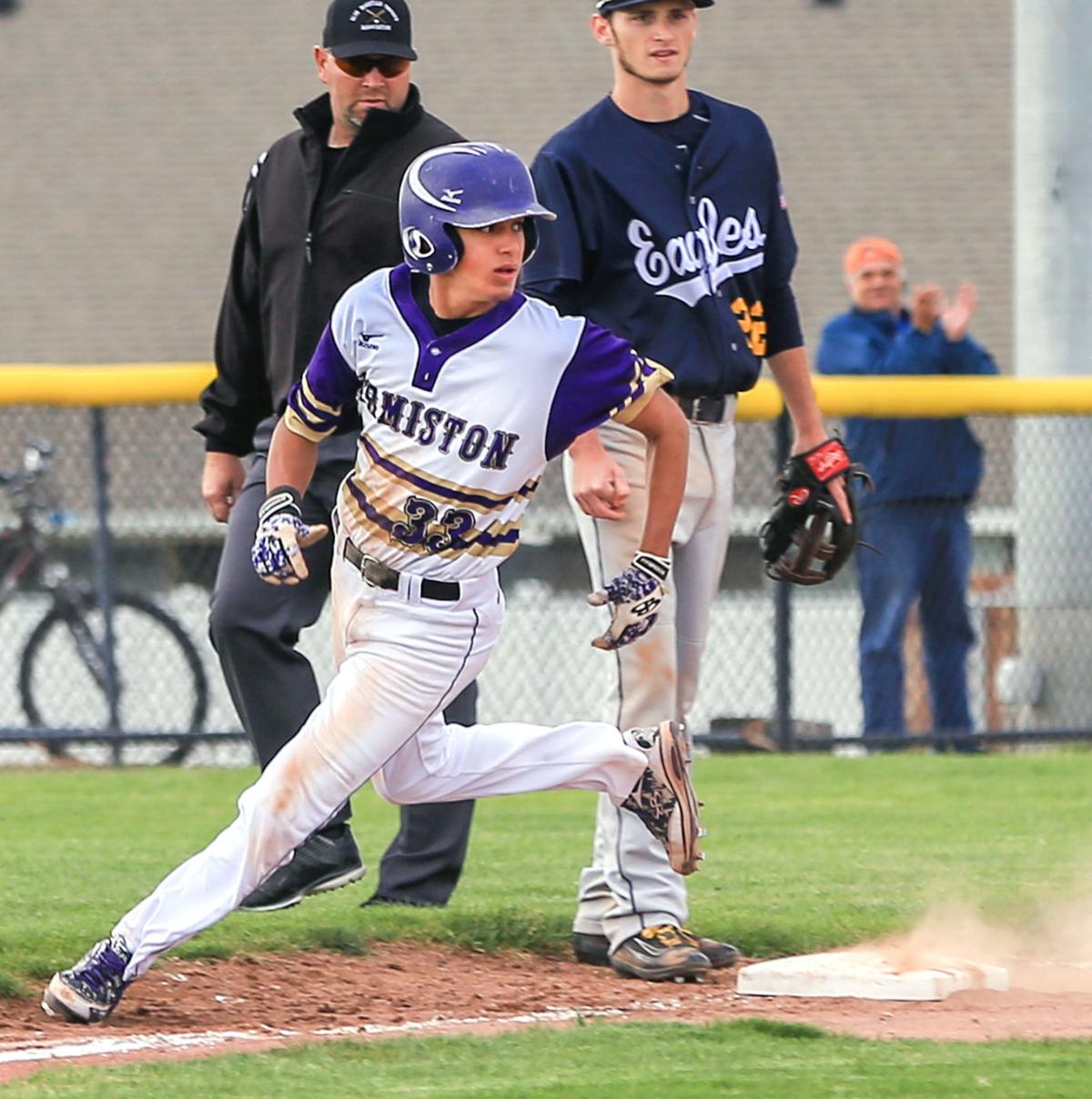 Hermiston's Jordan Ramirez and Kaden Caldwell converge on the ball in right field during Friday's game against Hood River Valley at the Armand Larive baseball field.

Hermiston's Caden Schwirse fields a throw from teammate Jordan Ramirez as Lucas Viuhkol, of Hood River, slides into second base during Friday's game at the Armand Larive baseball field.

With a mere three games remaining in the regular season, the Hermiston baseball team gathered for Friday’s game needing all the wins it could get as it aims to earn a postseason berth.

However, getting a win on Friday would not be easy as standing in Hermiston’s way was the Columbia River Conference leader Hood River Eagles. Though, that did not intimidate the Bulldogs who had beaten the Eagles in the teams last meeting on April 18. And just like the prior meeting, Hermiston was the team that came out on top on Friday as the Bulldogs came back from an two-run deficit in the first inning and held off the Eagles for a 5-4 victory on a blustery day at Armand Larive Middle School.

“We’re ecstatic for the W,” Hermiston assistant coach John Christy said afterward. “I felt like we played loose and played our game rather than tighten up and let the moment take a hold of us. I feel like we did a good job of just being relaxed and coming back.”

The Bulldogs (10-13, 4-6 CRC) rode a fantastic pitching performance by junior Lukas Tolan, who lasted six innings and struck out four while allowing nine hits and just three runs. He allowed two runs in the first inning helped by a defensive error, and gave up one unearned run in the sixth, which bookended four innings of mastery. Tolan allowed five hits in those innings, but stranded six runners to keep his team in the game.

“I just knew I had to trust my defense and it would all work out,” Tolan said. “I knew I had to hang in there and they would make some plays of me.”

“Lukas really pitched his butt off today,” Christy said of his pitcher. “The second inning on, he really focused on working down and letting his ball move and he settled right in there.”

Though it was very early, perhaps the biggest moment of the game for Hermiston came in the bottom of the first inning. Having surrendered the 2-0 lead in the top of the frame, the Bulldogs managed to get a run back thanks to an RBI single up the middle by Wyatt Noland which helped the Bulldogs re-gain some momentum.

“When I think about that first inning, giving up two but getting one back was huge for us,” Christy said.

The Bulldogs then tied the game in the second inning on an RBI groundout by Jordan Ramirez which scored Daniel Gossler from third base.

As the game moved along, the high winds that rolled through the area continued to get stronger, with gusts of 20-25 miles-per-hour blowing straight out toward centerfield. Those winds made it tough on both defenses, especially for fly balls and in the fourth inning it played into Hermiston’s favor.

A fly ball to center field off the bat of Joel Mendez should have been the Bulldogs’ third out, but the wind kept pushing it further toward the fence which twisted Hood River’s centerfielder around and caused him to drop the catch, giving Hermiston new life.

That brought Jordan Ramirez to the plate with two outs and runners on second and third with only one thing on his mind.

“If the pitcher throws me a fastball down the pipe, I’m hitting it to the outfield,” Ramirez recalled with a smile.

And on a 1-0 count, Ramirez jumped on a fastball from Hood River (16-7, 8-2) pitcher Conner Coerper and smacked it into left field, scoring both runners and putting Hermiston on top 4-2. The sophomore finished with a team-best two hits on the day with three RBIs and one run scored.

Hermiston’s final run came in the fifth inning, when Brylee Dufloth sprinted to home from third base on a passed ball and barely beat the tag at home to give Hermiston a 5-2 lead. That run proved to be huge insurance run for the Bulldogs, because the Eagles gave everything they had for a rally attempt in the seventh inning.

With two outs, Hood River scored one run on Ramirez, who came on in relief of Tolan, and then drew a walk to put the tying and go-ahead runs on base. After a passed ball, those runs moved up to second and third with Hermiston still just needing the final out to claim victory. Ramirez said he didn’t get too nervous on the mound in the situation, he just knew he needed to do his job.

“I told myself ‘Just throw strikes’ and I knew my infield and outfield had my back,” Ramirez said.

And it worked, as Ramirez induced an easy groundball to shortstop where Caden Schwirse threw out the batter for the final out to earn the save.

“It’s a big win for us,” Ramirez said. “That is a good team over there and we want to play our best here to finish the season.”

The win mixed with a loss by The Dalles on Friday moves Hermiston into third place in the CRC, the final postseason spot for the conference. And with now two games left, Christy believes the best is yet to come for the Bulldogs.

“I think our upside is pretty huge,” he said. “This is where we wanted to be by the end of the season in terms of playing well and hopefully we can continue doing it. We keep telling the kids, anything can happen in the playoffs and we’re a scary team and I think a lot of teams can overlook us, but we have a lot of guys who can do positive things.”

UCFD1 responds to record number of calls in July