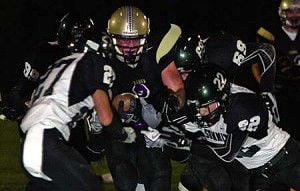 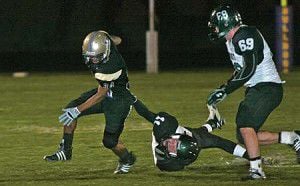 Hermiston's Stevie Martinez runs out of a tackle by Summit's Justin Huckins while Matt Meagher is in pursuit during the Bulldogs' 42-10 win over the Storm Friday night at Kennison Field.<br><i>Billy Gates/The Hermiston Herald</i>

Hermiston's Stevie Martinez runs out of a tackle by Summit's Justin Huckins while Matt Meagher is in pursuit during the Bulldogs' 42-10 win over the Storm Friday night at Kennison Field.<br><i>Billy Gates/The Hermiston Herald</i>

Hermiston is heading back to the Class 5A playoffs.

With Mountain View handing Crook County a 38-7 loss also on Friday, the Bulldogs jumped the Cowboys and are now tied for third with the The Dalles-Wahtonka at 3-2. Bend beat TDW 33-13 to just about lock up the conference title on Friday.

But, the victory over the winless Storm didn't come easy. The Summit passing attack gave Hermiston fits throughout the first half and the Bulldogs went into the halftime locker room clinging to a 14-10 lead.

Whatever the Bulldogs' coaching staff said during its halftime speech seemed to resonate with the players, resulting in 28 unanswered points in the second half to run away with the win on senior night.

"We've had a rough couple weeks," Hermiston coach Mark Hodges said. "We had the No. 1 team [Hillsboro] on the ropes last week and let them off the hook. It took us awhile to work our way out of that."

But when the Bulldogs finally put it behind them, the offense took over, highlighted by a 54-yard touchdown pass from Faafiaula Ena to Mike Royer to open the flood gates in the second half.

After tossing nine interceptions over the past two weeks, Ena showed why he was the offensive player of the year in the conference last season. Ena recognized the single coverage on Royer and audibled into a different play, throwing a picture-perfect ball that Royer caught in stride and ran the rest of the way to paydirt.

"That was exactly what Junior [Ena] had to do there," Hodges said. "He checked off and did it right."

Hodges also used the game to give backup quarterback Tim Rude some snaps, something which Hodges said helped both Ena and Rude quite a bit.

Rude came in to begin the second offensive series for Hermiston and occasionally came in to give Ena not so much a breather, but another perspective on the offense.

"I think that went really well," Hodges said of rotating his quarterbacks.

"It really gave Junior an idea of what ne needed to do and what reads he needed to make. He came in and did that."

Ena finished the night going 5 for 7 with 98 yards and a pair of touchdowns while Rude completed 5 of 10 passes for 59 yards.

Ena opened up the scoring with a 13-yard pass to tight end Riley Smith, a play which Ena changed at the line. After Summit evened the score with a 31-yard touchdown strike, Curtis Berger rumbled for the first of his two touchdowns, taking a handoff 9 yards to the end zone with 2:02 remaining in the second quarter.

Following Ena's 54-yard bomb to Royer, Stevie Martinez slashed his way through the Storm defense and into the end zone for a 9-yard score with 2:55 remaining in the third.

Berger added another score in the fourth quarter on a 3-yard run and Paul Lloyd iced the game for Hermiston, running back an interception 45 yards for the final tally.

Hermiston completes its IMC schedule Friday against the rival Pendleton Bucks at 7 p.m. Friday at the Round-Up Grounds. Pendleton has a 53-6 winner in a nonleague matchup with Madras Friday.

The third-seed from the IMC will host the No. 4 seed from the Mid-Willamette Conference, which could be Corvallis, South Albany or Lebanon depending on how Friday's games go. If the Bulldogs end up as the No. 4 seed, they will hit the road to the Midwestern Conference's No. 3 seed, which appears to be Marshfield in Coos Bay, for the first round of the Class 5A playoffs.

By the Way: Grants available for artists affected by COVID-19

Hermiston History: Crews work for an hour to free man from crash site