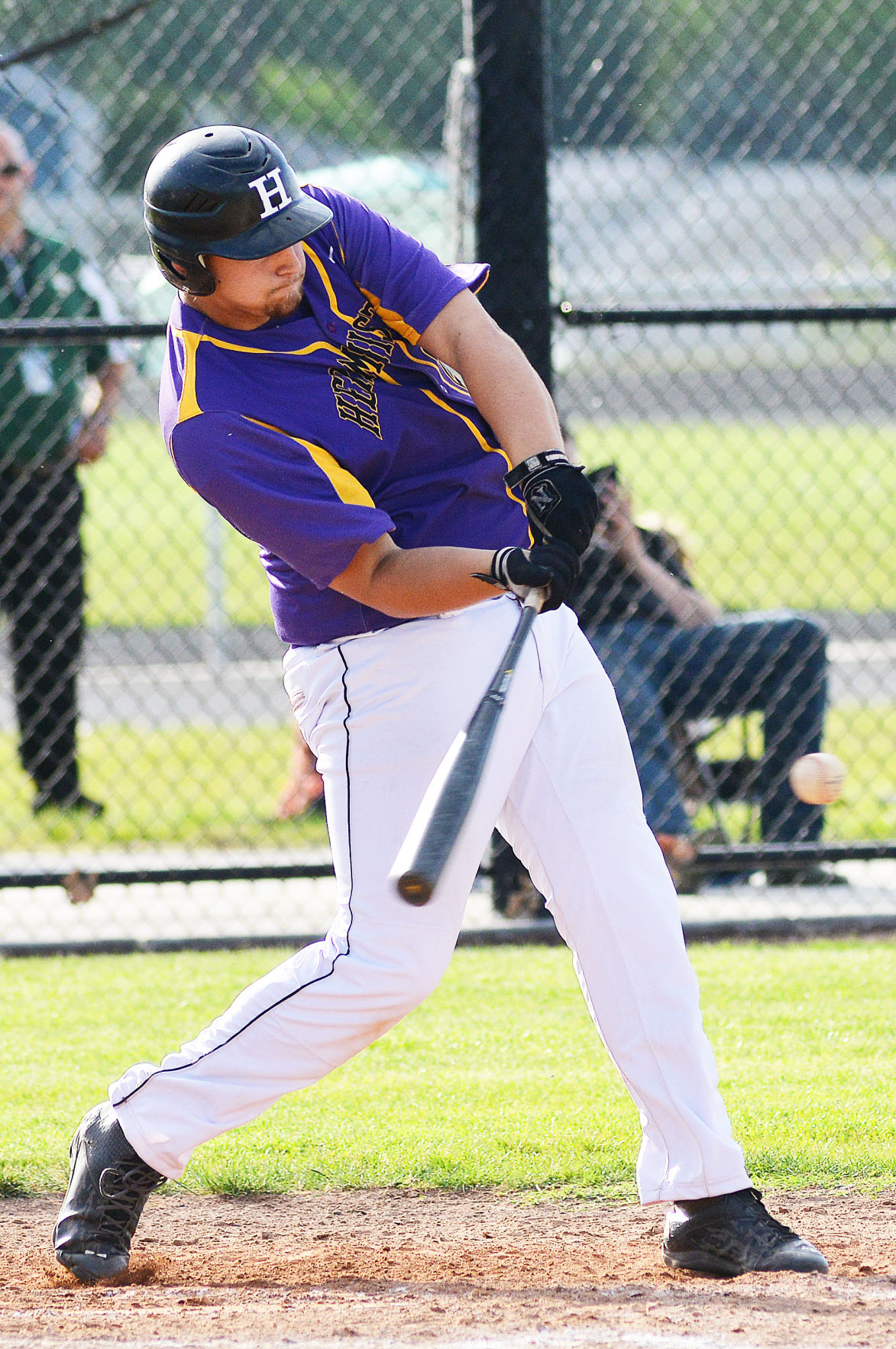 Staff photo E.J. HarrisHermiston's Tyler Sexton connects foe an RBI single in the bottom of the sixth inning of the Bulldogs' 1-0 win against Pendleton on Tuesday in Hermiston. 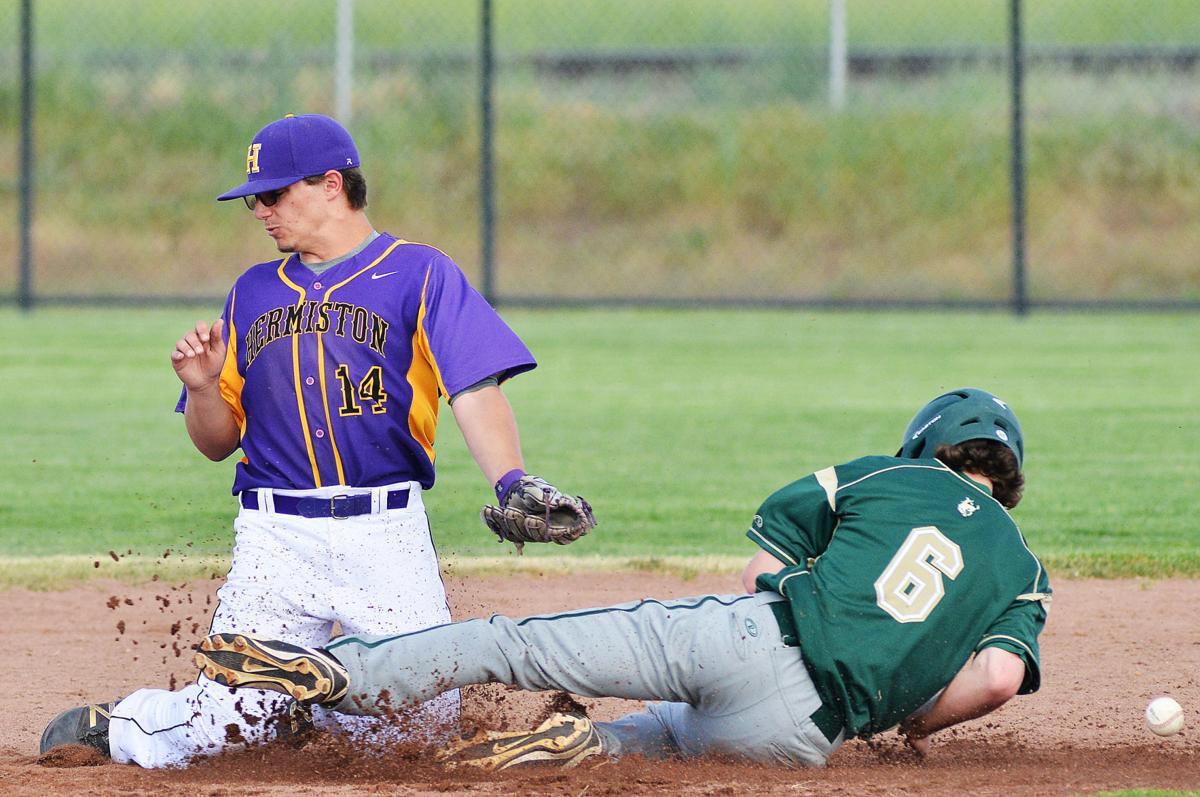 Staff photo E.J. HarrisPendleton's Wyatt Morris slides into second base as Hermiston's Daniel Glosser turns to avoid a collision in the Bulldogs' 1-0 win against the Bucks on Tuesday in Hermiston. 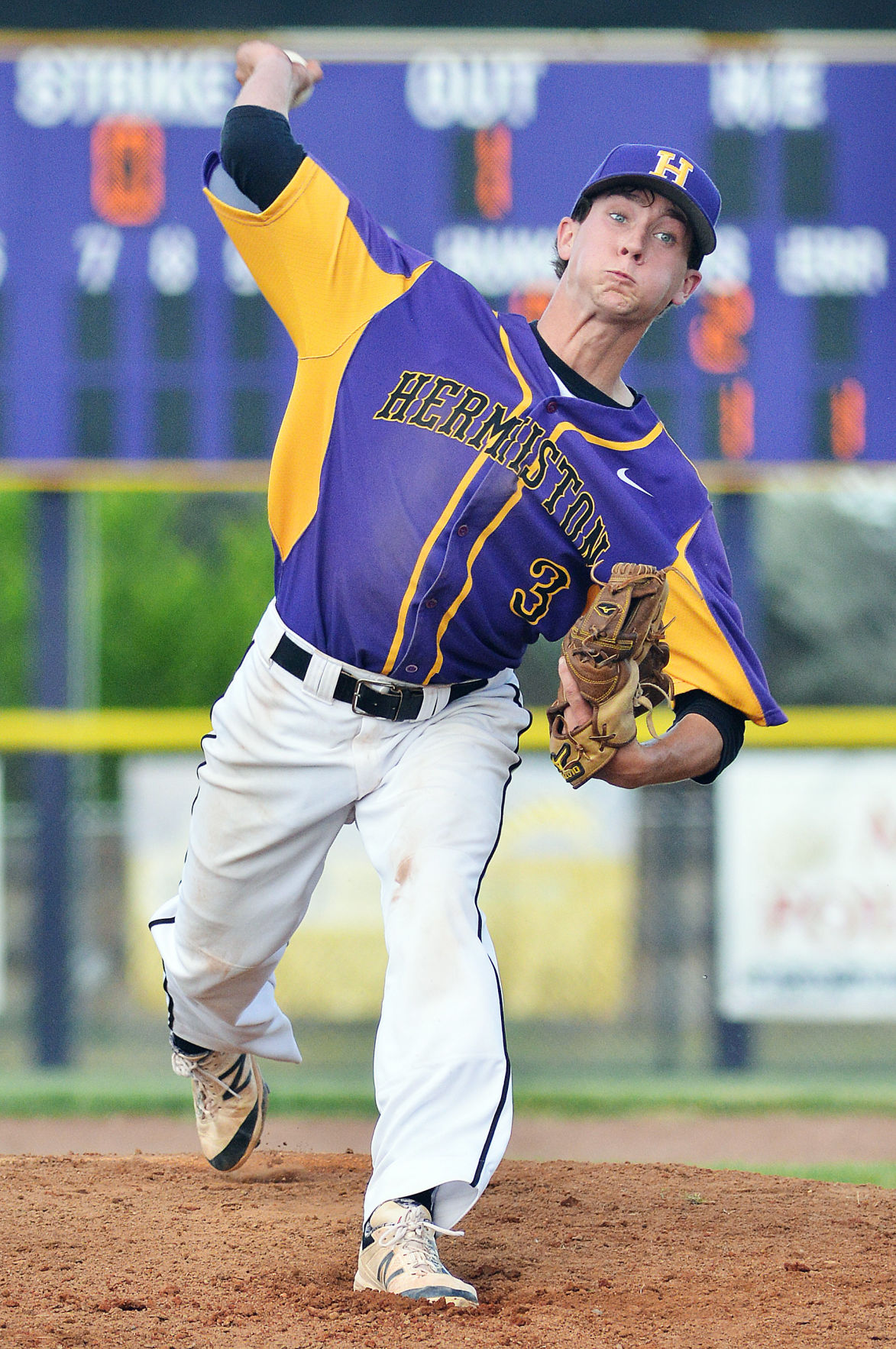 Staff photo E.J. HarrisHermiston's Chase Root throws from the pitcher mound in the Bulldogs' 1-0 win against Pendleton on Tuesday in Hermiston.

Staff photo E.J. HarrisPendleton's Jack Peterson catches a fly ball in the Bucks' 1-0 loss to Hermiston on Tuesday in Hermiston.

Staff photo E.J. HarrisHermiston's Tyler Sexton connects foe an RBI single in the bottom of the sixth inning of the Bulldogs' 1-0 win against Pendleton on Tuesday in Hermiston.

Staff photo E.J. HarrisPendleton's Wyatt Morris slides into second base as Hermiston's Daniel Glosser turns to avoid a collision in the Bulldogs' 1-0 win against the Bucks on Tuesday in Hermiston.

Staff photo E.J. HarrisHermiston's Chase Root throws from the pitcher mound in the Bulldogs' 1-0 win against Pendleton on Tuesday in Hermiston.

Staff photo E.J. HarrisPendleton's Jack Peterson catches a fly ball in the Bucks' 1-0 loss to Hermiston on Tuesday in Hermiston.

HERMIStoN — Before league play began, Hermiston senior Tyler Sexton said that aside from winning the league championship and a state championship, the Bulldog seniors had another goal they wanted to complete: to sweep Pendleton.

The Bulldogs are now well on their way to checking off that box as they knocked off the Buckaroos 1-0 on a warm Tuesday afternoon at Armand Larive Middle School.

“This one definitely feels good,” Sexton said Tuesday. “I think we could have played a little better but scratching it out the way we did was definitely impressive to me. We battled, we played really good defense and I’m pretty proud of my team with this win.”

The win also clinches a home play-in game for the postseason, as Hermiston (13-8, 6-3 CRC) leads both Pendleton (11-11, 2-7) and The Dalles by four games in the league standings with only three games left to play. The CRC crown is still within reach, as well, as the Bulldogs trail Hood River by just two games, but they will need some help from Pendleton and The Dalles to reach that.

“That’s really big for us,” Sexton said. “The league title is definitely still our goal and we need some other teams to put in some work versus Hood River for that to be possible but we’re definitely doing our part to get to that.”

Hermiston’s (13-8, 4-3 CRC) only run did not come until the sixth inning as the two teams were deadlocked in a pitchers duel through the first five-plus frames. Pendleton starter Wyatt Morris had allowed just two hits and one walk up to that point, but gave up a lead-off single to R.J. Robles to start the sixth.

Then after back-to-back outs, Sexton stepped to the plate with the go-ahead run at second base. Facing a 3-1 count, Sexton swung at a fastball and sent a flyball to centerfield where Pendleton’s Kai Quinn appeared to have settled under it for the third out. However, Quinn had backtracked too far and the ball fell in for a hit, scoring Robles for the winning run.

“It’s just one of those things ... (Kai) thought it was hit a bit harder than it was,” Pendleton coach T.J. Haguewood said of the play. “Then the wind just kind of killed it at the end. It was tough.”

Hermiston coach Lance Hawkins said he was ecstatic once the ball fell in but wasn’t surprised to see his team catch the break.

On the Bulldogs end of the pitching duel, Chase Root threw yet another quality start for the Bulldogs allowing just four hits, two walks and one hit-by-pitch to go with five strikeouts through seven innings.

“Honestly I didn’t really have my best stuff today but my defense is what won us that game,” Root said. “We had a couple of errors but other than that they were solid and you can’t ask for anything more than that.”

Root stranded seven Buckaroo baserunners in the game and escaped a few jams along the way. Pendleton had a prime scoring opportunity in the fifth inning with runners on first-and-second with only one out but fell victim to some miscommunication on the basepaths that left them scoreless yet again.

Quinn had shot a laser hit into the right-centerfield gap that appeared to be deep enough to score a run, but Pendleton’s Daniel Naughton got caught looking for the ball to fall in on second base, while Jack Peterson and Quinn were both running hard and trying to advance.

The late read for Naughton forced Haguewood to hold him at third base and Peterson got caught between second and third as Quinn sprinted into second base for what he thought was a double. Peterson was tagged out, and then the Bucks threat ended on the very next batter on a fly out by Devon Roe.

Haguewood was frustrated with the way the inning turned out, saying it all goes back to preparation.

“We preach about pre-reads on where outfielders are playing, so it wasn’t a very good execution on our part,” Haguewood said.

Pendleton — tied with the The Dalles with a 2-7 league record — now needs to regroup to finish out the season, as a spot for a play-in postseason game is still up for grabs, with three games left to play.

Pendleton will host Hood River on Friday at 4:30 p.m., and Hermiston will travel to The Dalles for a 4:30 p.m. first pitch.