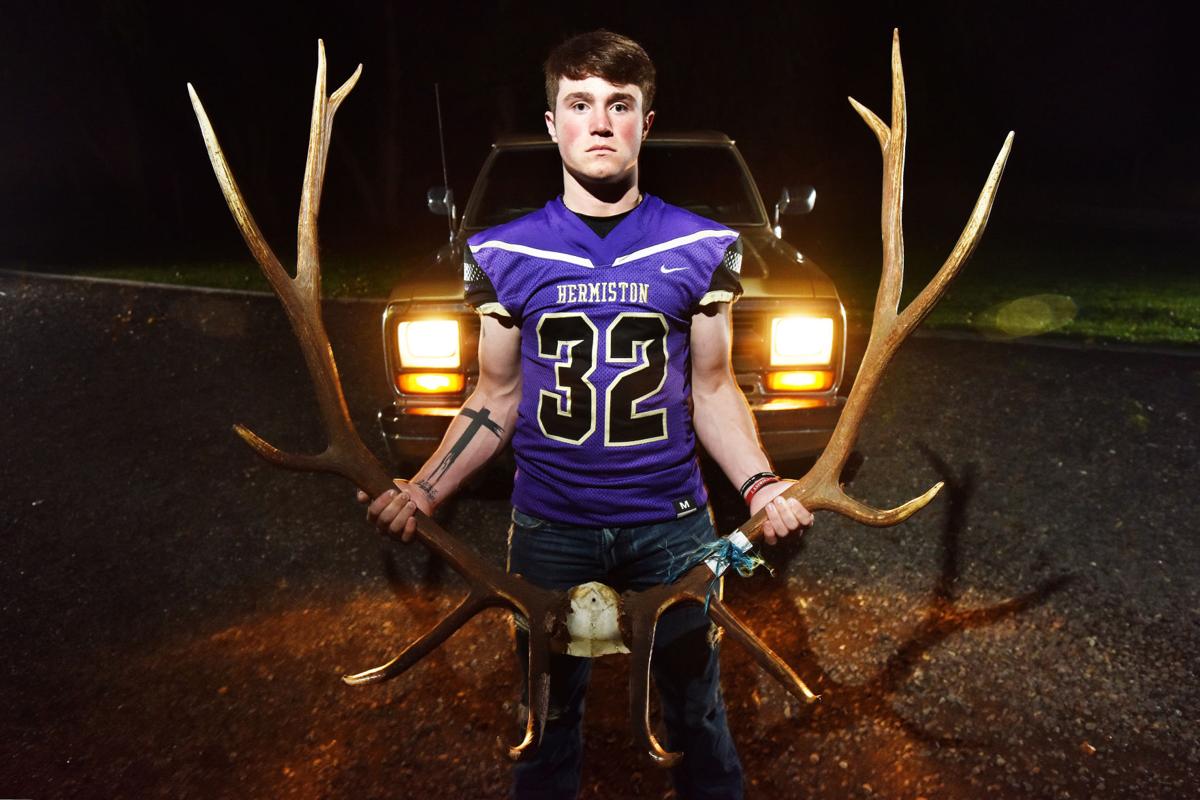 Hermiston running back Wyatt Noland took his junior year of football off so that he could enjoy the outdoors and hunt big game (2018). 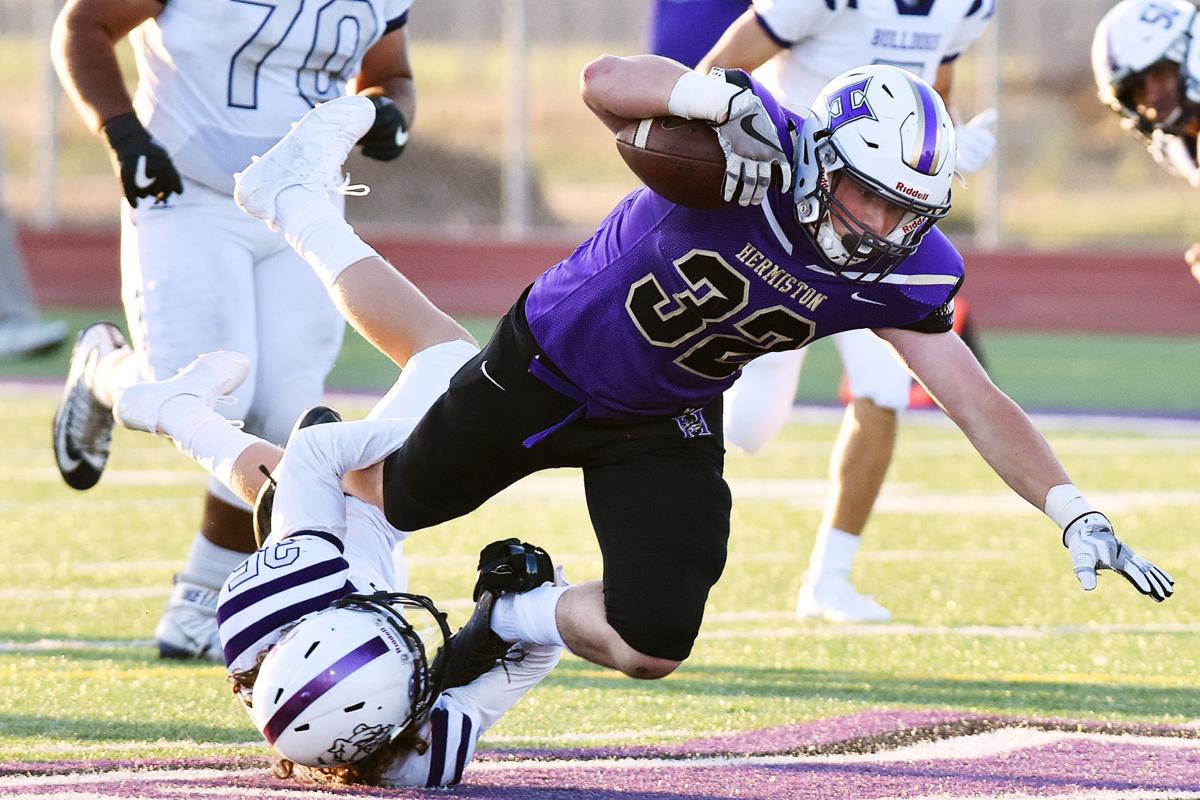 Hermiston's Wyatt Noland dives forward while getting tackled by Pasco's Traeton Mitchell in the Dawgs' 45-0 win against the Bulldogs on Friday, August 31, 2018, in Hermiston.

Hermiston running back Wyatt Noland took his junior year of football off so that he could enjoy the outdoors and hunt big game (2018).

Hermiston's Wyatt Noland dives forward while getting tackled by Pasco's Traeton Mitchell in the Dawgs' 45-0 win against the Bulldogs on Friday, August 31, 2018, in Hermiston.

There’s something about a crisp fall morning that appeals to Wyatt Noland.

Walking among the falling leaves and tracking deer and elk puts the Hermiston senior in his happy place.

“I have been doing it forever,” he said of hunting. “My dad (Justin) and my uncle (Judd Noland) are really big into hunting, and I got into it too. I love the mountains. I could be there everyday.”

It was hunting and his love of the outdoors that drew Noland away from football last year.

“I was hunting with my uncle last year when they were playing in the state championship game,” Noland said of Hermiston’s 38-35 victory over Churchill for the Oregon 5A state title. “I never went to one game last year. I was the same old me, I just didn’t play football. I focused more on baseball and went hunting.”

A change of heart

Noland, 17, had planned on playing football last year, participating in spring drills and attending every workout. He was penciled in as the starting middle linebacker.

When it came time to hand out gear, Noland was nowhere to be found.

He wasn’t going to play this year either, but some sage advice from family and coaches swayed him to strap on the pads one last time.

“Coach Mosher said he really needed someone like me,” Noland said. “Andrew texted me and said he’d like to ball with me this year. I decided to do it.”

James said he supported Noland last year, but is glad to be sharing the backfield with him this fall.

“Last year, everyone was kind of like, OK,” James said. “He put in a lot of work in the spring. We were lifting partners. It was his decision and I stood by him. Taking that year off, I think he realizes what he missed.”

Justin Noland also had his say.

“My dad told me I had the rest of my life to hunt, but I only have a short time to play high school sports,” Noland said. “It has turned out to be fun, so far, playing football with my friends.”

“My dad was excited I was playing this year,” Noland said. “I think my grandpa was more excited.”

They have reason to be.

The 6-foot-1, 195-pound Noland is the MCC’s leading rusher with 1,227 yards through six games (average of 154 yards per game), and leads the conference in scoring with 17 total touchdowns (13 rushing, one receiving).

“People feed off his toughness,” James said. “He’s put a lot of weight on his shoulders. He brings a lot to the table. Without him, I don’t know where we’d be.”

Noland was held to a season-low 82 yards two weeks ago in a 34-10 loss a to Chiawana, but he gave credit where it was due.

“That was the best defense we will see all year,” Noland said. “They were disciplined.”

However, he turned around and put up a career high Friday, running 303 yards for four touchdowns.

Hermiston coach David Faaeteete said he is happy to see Noland back out on the field.

“We are glad to have him back out,” Faaeteete said. “He picked up where he let off. He has a great attitude and a good work ethic.”

A way of life

“I wish I could not go to practice and just play in the games,” he said with a smile. “Running people over is my favorite thing. There will be an opening and sometimes I will choose to run over someone. Andrew tells me to hit the hole or he will keep the ball himself.”

After the football season is over, Noland will put his efforts into the weight room and baseball, where he is a catcher for the Bulldogs.

From there, he’s not sure what the future holds.

Western Oregon has contacted him about playing football and baseball.

“I’d play college football, but baseball is my thing,” Noland said. “I probably don’t know half the things I’m capable of. Every day, I make it the best that I can. It may turn out that I’m better at football.”

James said that it’s hard at times to tell which sport Noland prefers.

“He’s loved baseball forever,” James said. “That’s his sport. You want him back there if you are a pitcher. After seeing what he’s done this year in football, I can’t tell which one he likes more.”

While college is in his plans, Noland also said he would like to one day join the Marine Corps.

“At some point in my life, I will go there,” he said. “I see them as the top people. You want to be the best, you train with the best.”