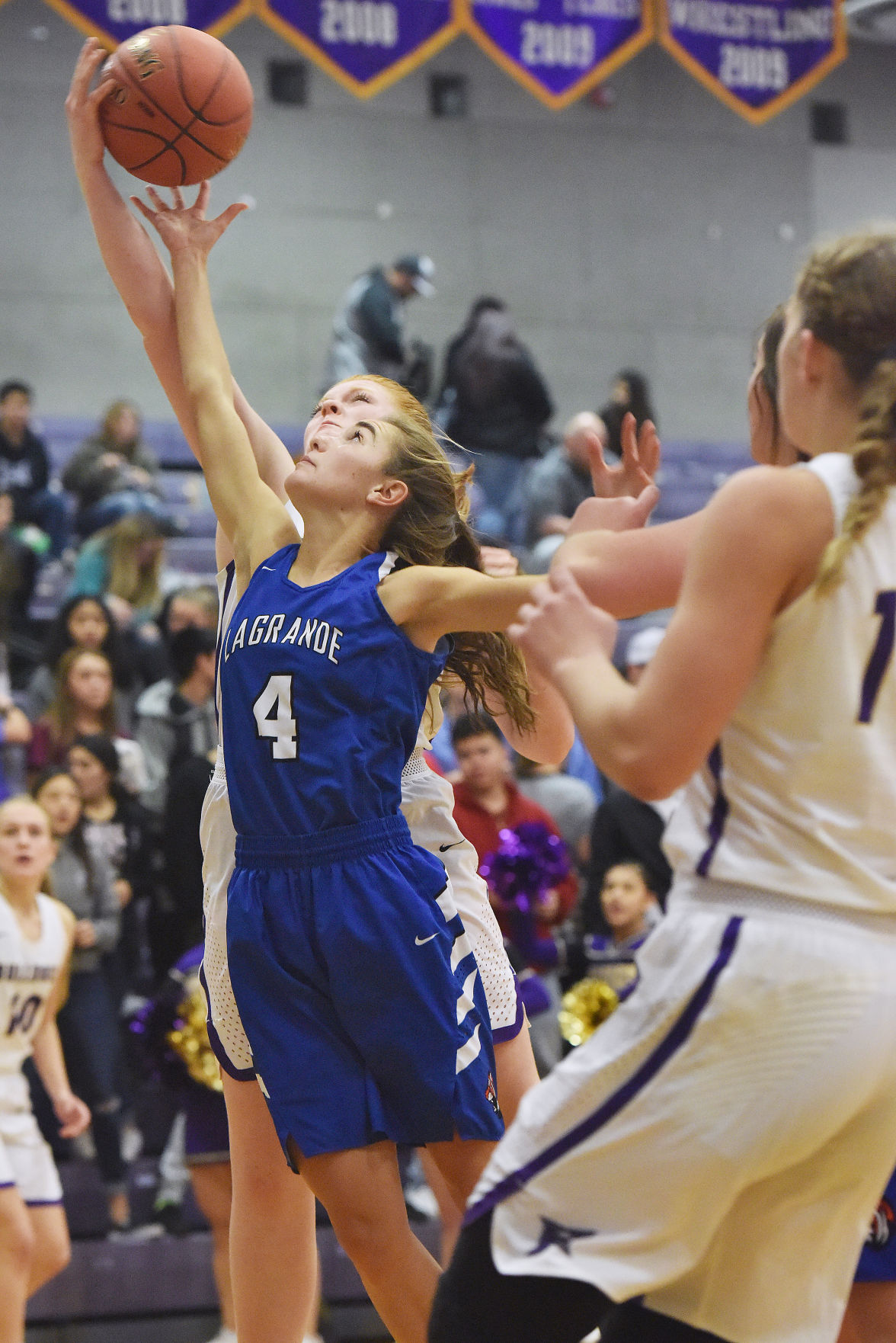 Hermiston’s Kendall Dowdy goes up over the top of La Grande’s Lexee Gomes in the Bulldogs’ 47-35 win over the Tigers on Tuesday in Hermiston. 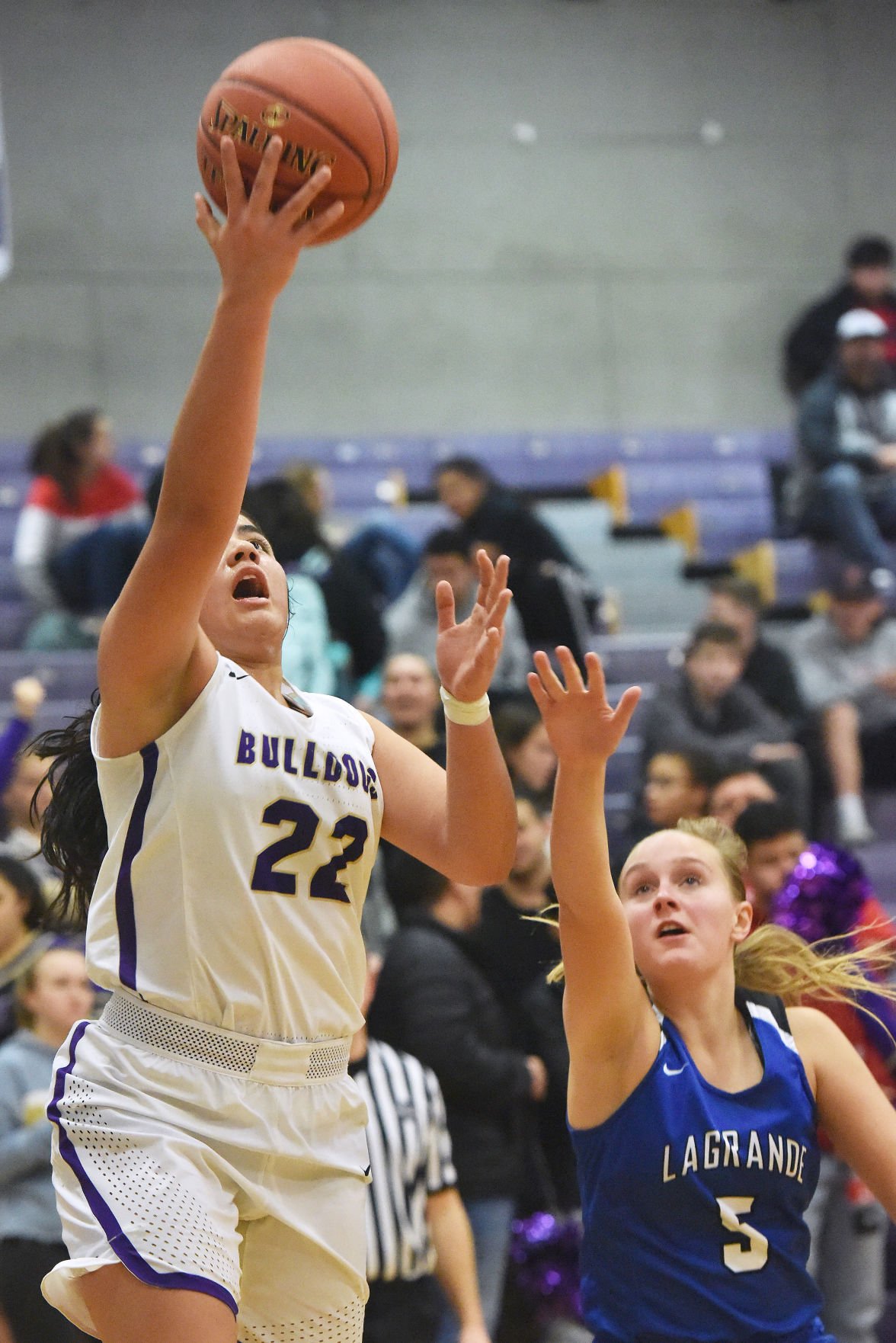 Hermiston’s Jazlyn Romero lays the ball in in front of La Grande’s Lauren Rinker in the Bulldogs’ 47-35 win over the Tigers on Tuesday in Hermiston.

Hermiston’s Kendall Dowdy goes up over the top of La Grande’s Lexee Gomes in the Bulldogs’ 47-35 win over the Tigers on Tuesday in Hermiston.

Hermiston’s Jazlyn Romero lays the ball in in front of La Grande’s Lauren Rinker in the Bulldogs’ 47-35 win over the Tigers on Tuesday in Hermiston.

Hermiston is going to have to clean up its game if it wants to have success in the Mid-Columbia Conference this season.

The Bulldogs turned the ball over 21 times, and Kennewick was there to pounce on the opportunities en route to a 51-38 victory Saturday in the conference opener for both teams at the Lions Den.

“That’s theme of our season so far,” Hermiston coach Juan Rodriguez said of his team’s poor decisions on the court. “We are playing with a young group that makes passes at inopportune times. Their immaturity showed tonight against a good Kennewick team.”

The Lions, who only trailed 1-0 early in the game, led 29-18 at the half, but had their lead cut to 35-30 at the end of the third quarter as the Bulldogs scored 12 points, including a late 3-pointer by Kaylee Young.

“We started the second half slow and they came back on us,” Kennewick coach Darin Santo said. “We found a way to win. I thought we didn’t play pour best game, but I was really proud of them.”

The Bulldogs went almost five minutes without scoring a point in the fourth quarter. Jayden Ray knocked down a couple of free throws to end the drought, but the damage had already been done.

“We need to figure it out sooner than later,” Rodriguez said. “We need to play play better in all aspects of the game.”

Hermiston got out to an early lead once again, but this time the Bulldogs were able to hold on for their first victory of the season.

Jazlyn Romero had 14 points, and Jayden Ray added 13 as Hermiston picked up a 47-35 nonleague victory Dec. 4 over La Grande at the Dawg House.

Though it was nice to get the win, Hermiston coach Juan Rodriguez was not pleased with how his team played.

“It’s one of those things where I feel like it is a loss,” he said. “Winning it like that doesn’t feel right. We are taking shots we don’t practice, ad-libbing and not running our offense.”

Hermiston opened the game with a 3-pointer by Romero, and the Tigers kept it close most of the quarter, pulling within 12-9 with 1:15 remaining in the first quarter.

The Bulldogs would scored the last seven points of the quarter — including a 3-point play by Paige Palzinski — to take a 19-9 lead.

La Grande (0-1) outscored Hermiston 7-6 in the second quarter, but still trailed 25-16 at the half. The Bulldogs had a 3 1/2-minute scoring drought in the second, which ended with Ray scoring with 1:35 to play in the first half.

The Tigers refused to go away to start the third as Camryn Collman scored back-to-back baskets to pull her team within 25-20 with 5:59 left in the third.

La Grande would not score another point the rest of the quarter, while the Bulldogs scored 10 unanswered points, including a 3-point play by Romero, and buckets by Mati Byrd and Ray the final 35 seconds of the quarter.

Ella Dunlap scored all seven of her points in the fourth quarter for the Tigers. But they could not catch the Bulldogs, who got four points each from Romero, Byrd and Ray in the fourth to help seal the win.