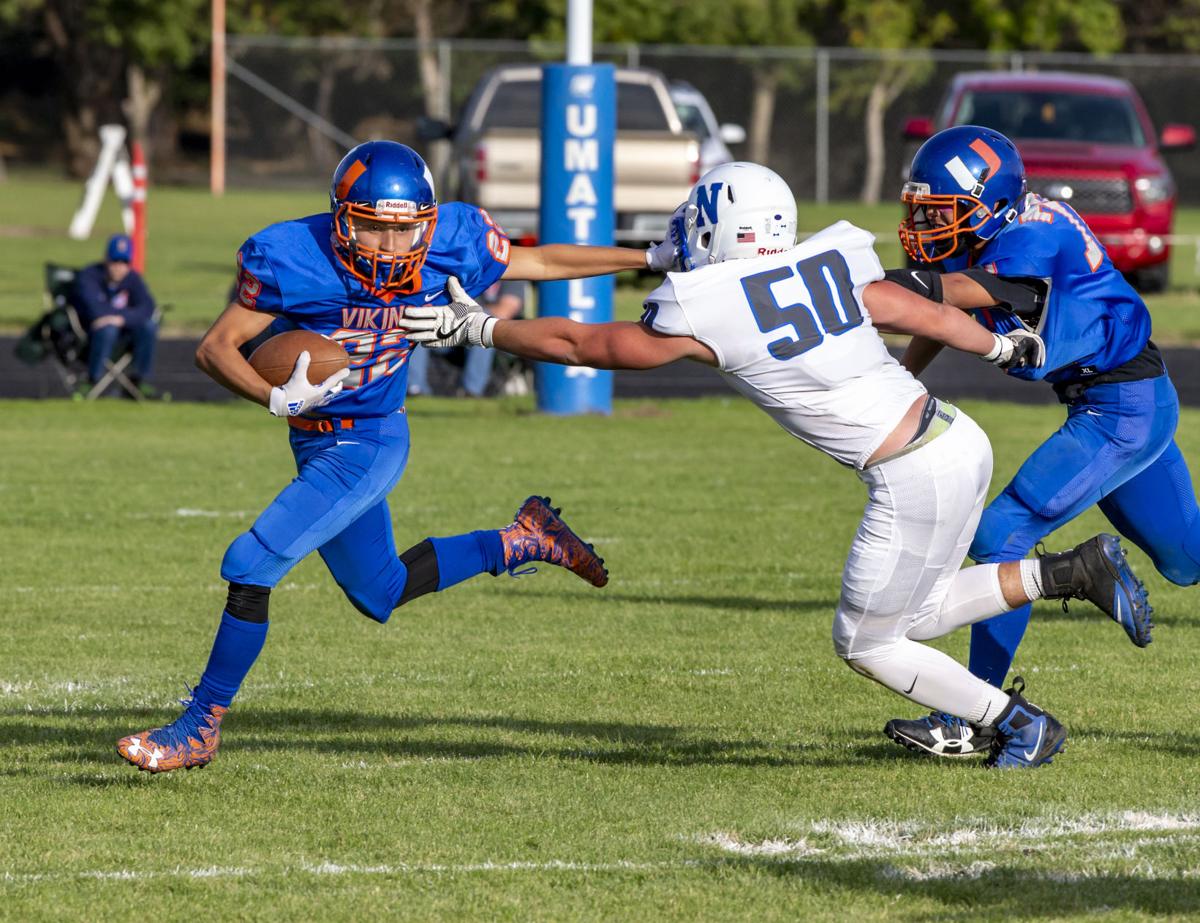 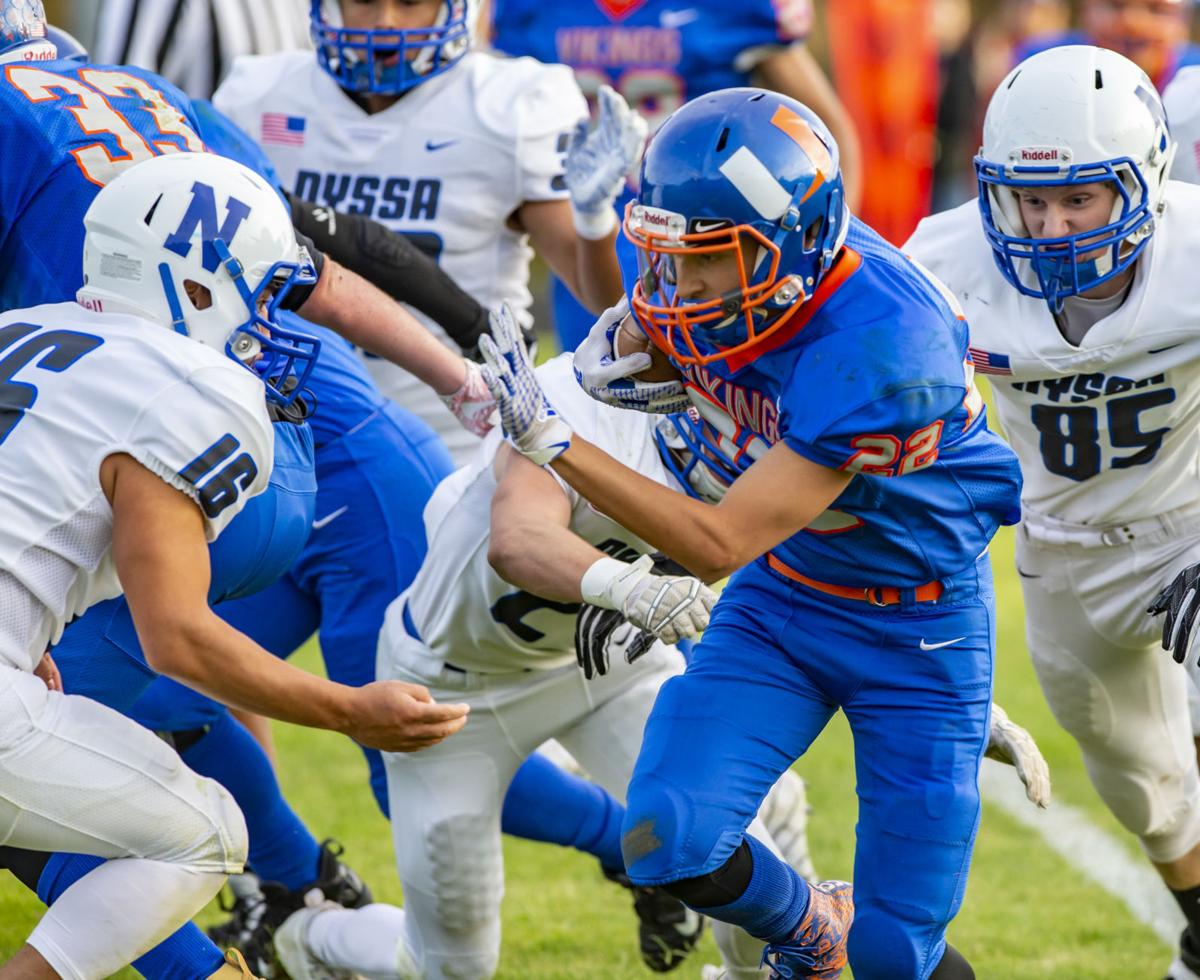 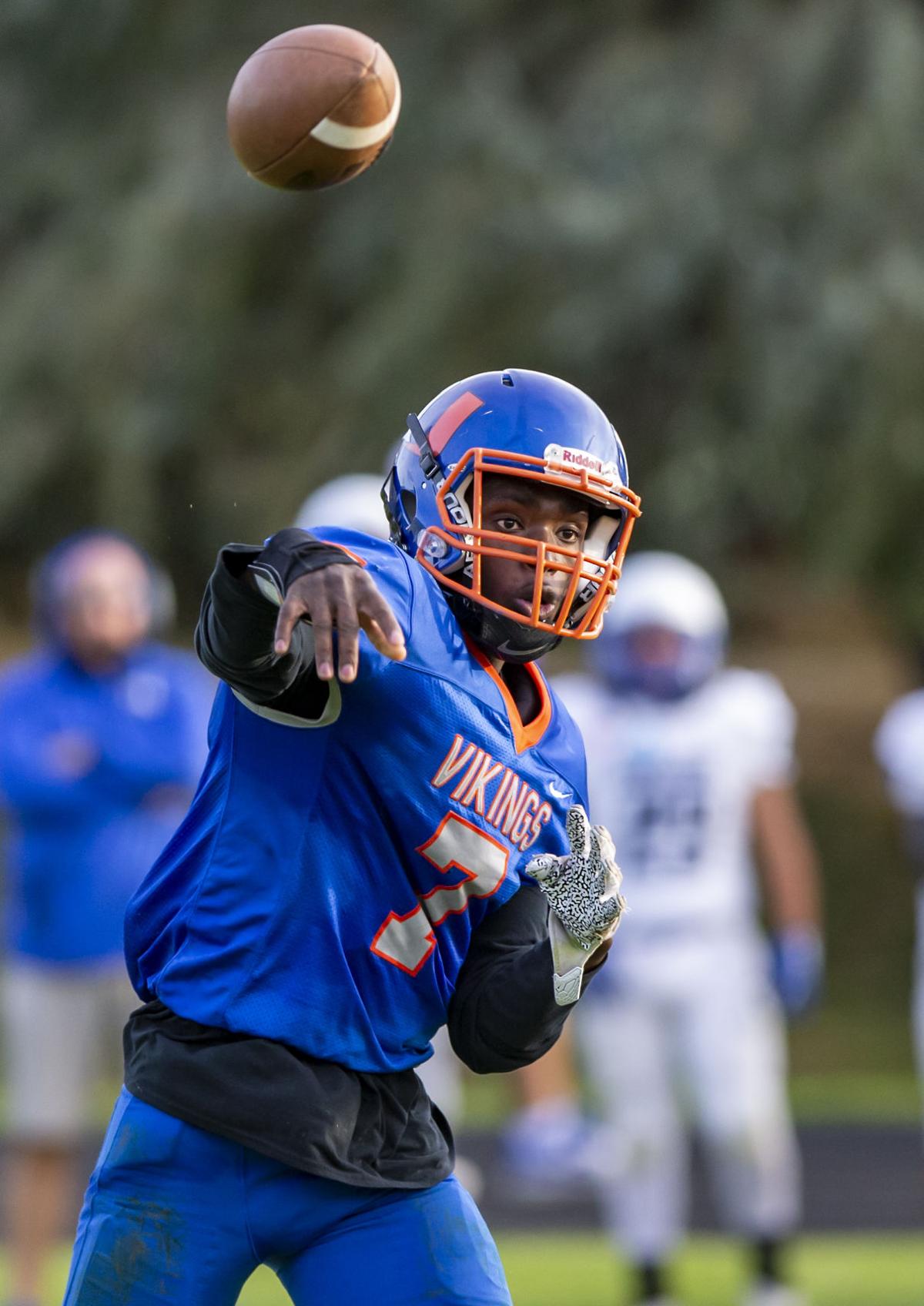 Umatilla quarterback Andrew Earl (7) lets off a pass late in the game against Nyssa. The Bulldogs defeated the Umatilla Vikings 22-7 at Umatilla High School on Friday night. 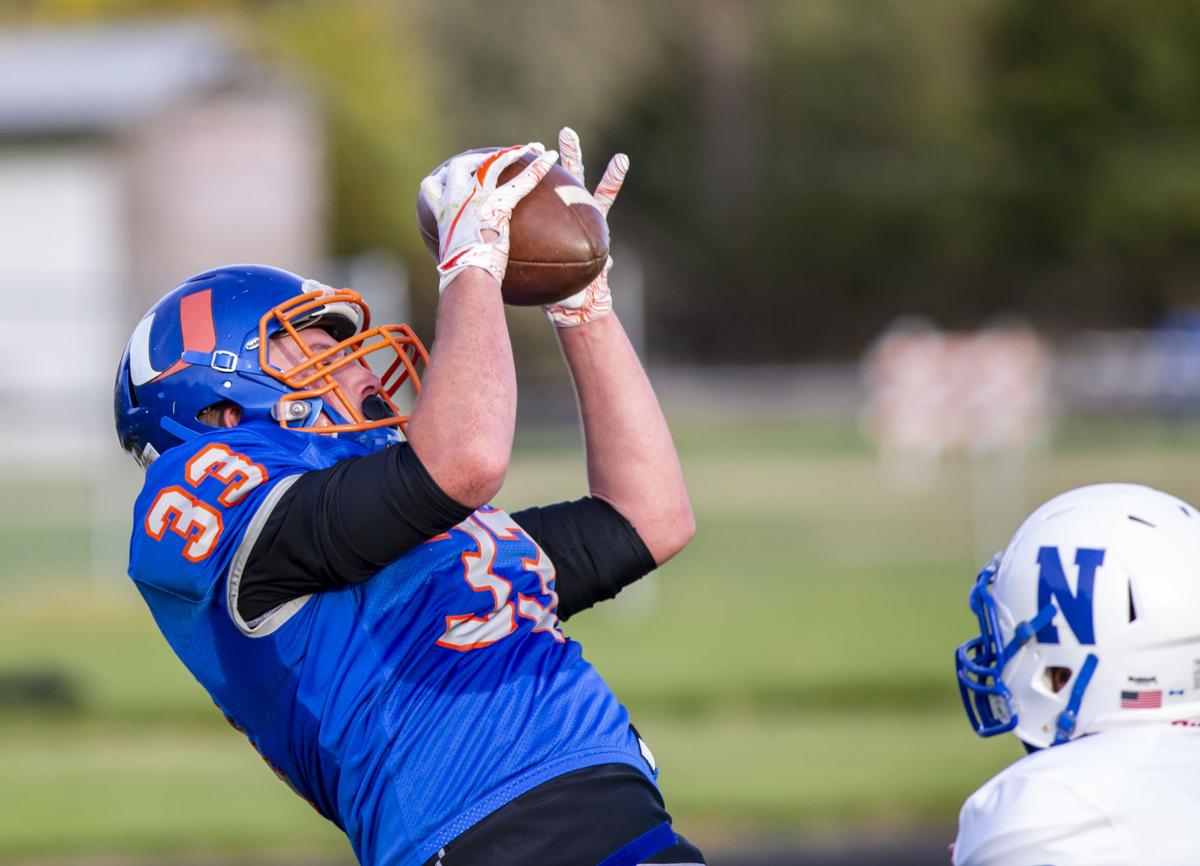 Umatilla tight end Cody Thacker (33) wrangles in a touchdown pass in the corner of the end zone. The Nyssa Bulldogs defeated the Umatilla Vikings 22-7 at Umatilla High School on Friday night. 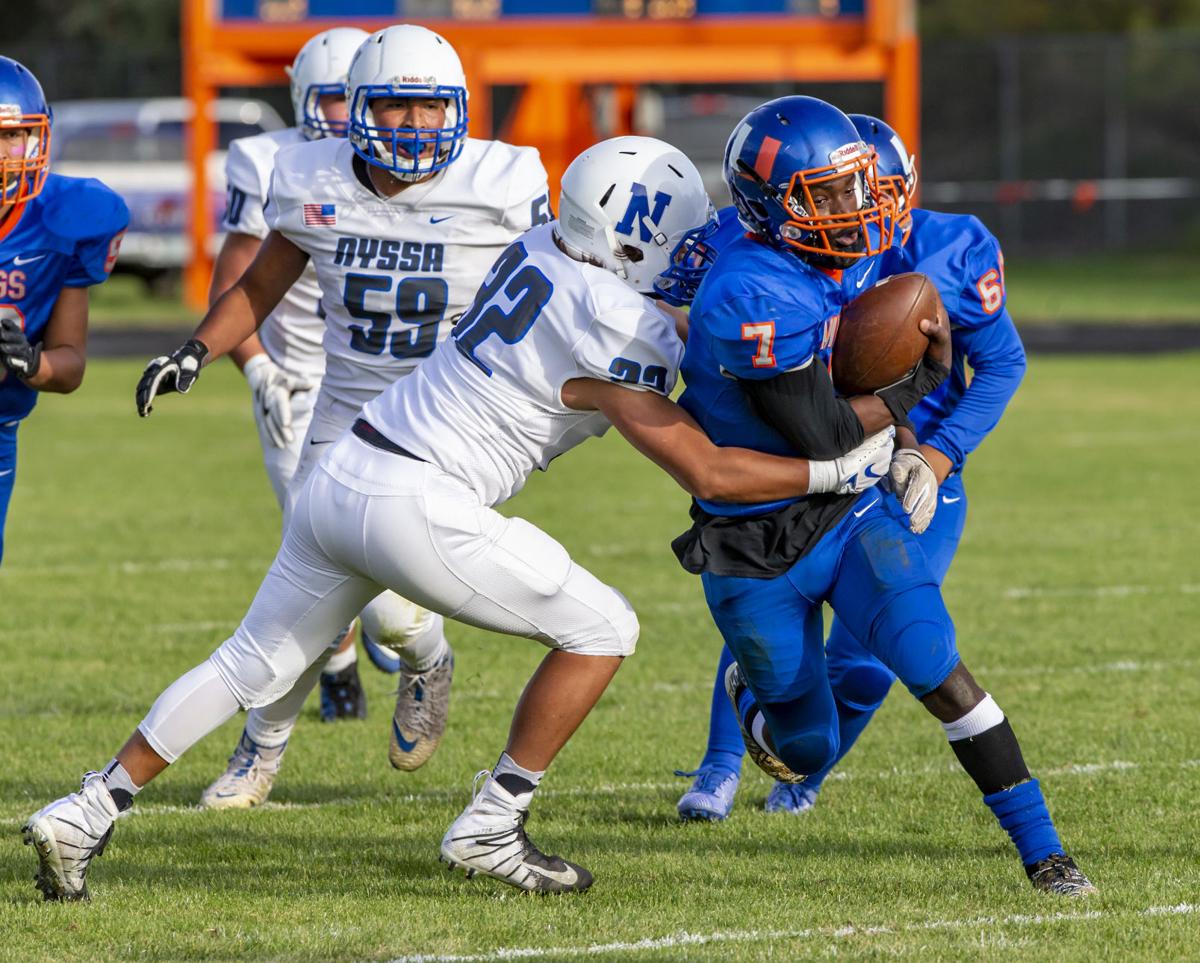 Umatilla quarterback Andrew Earl (7) lets off a pass late in the game against Nyssa. The Bulldogs defeated the Umatilla Vikings 22-7 at Umatilla High School on Friday night.

Umatilla tight end Cody Thacker (33) wrangles in a touchdown pass in the corner of the end zone. The Nyssa Bulldogs defeated the Umatilla Vikings 22-7 at Umatilla High School on Friday night.

For the better part of three quarters Friday afternoon, Umatilla went toe-to-toe with the Nyssa Bulldogs.

The Vikings had their chances late in the fourth quarter to rally past the Bulldogs, but an inability to move the ball proved costly in a 22-7 Eastern Oregon League loss.

“They are tickled to death to get out of here with a win,” Umatilla coach Dan Durfey told his team.

Nyssa coach Lee Long did not dispute that.

“You shouldn’t win when you turn it over six times,” Long said. “The defense played pretty darn good. Umatilla is much improved. They did an awesome job. Dan’s heart is in the right place. I have the utmost respect for him. He is a great coach.”

The fact the game was 8-7 in favor of Nyssa until the Bulldogs scored on a 16-yard pass play from Landon McDowell to Pedro Chavez with 2:29 left in the game, goes to show the improvement the Vikings have made since last season.

“We battled up front against their big line,” Durfey said. “They are just freshmen. It’s hard when you have to rely on freshmen to play varsity ball against juniors and seniors. They don’t have the experience, but they aren’t scared. They came out and they tried.”

The Vikings’ defense was stellar on the day. They forced, and recovered, four fumbles — including one in the end zone that thwarted a Nyssa touchdown with 4:12 to play in the game. Oscar Campos (two), Rojelio Fuentes and Ryan Lorence were credited with fumble recoveries.

“Our defense played lights out,” Durfey said. “It was just the last quarter. These kids haven’t been in a situation like this.”

Nyssa had great success running the ball in the first half, with Andrew Enders, Ryan Talbot, Caleb Benson and Aleonzo Calderon all getting quality touches.

Talbot scored the lone touchdown in the first half for the Bulldogs, powering his way in from the 1-yard line with 3:38 remaining in the first quarter. Talbot also ran the ball in for the 2-point conversion for an 8-0 lead that would stand at the half.

The Bulldogs limited the Vikings to 15 offensive plays and 3 yards of offense in the first half.

Defensively, the Vikings forced a fumble and stopped the Bulldogs on fourth down twice in the second quarter.

Nyssa fumbled the ball for the second time in the game, and the Vikings recovered at the Bulldogs’ 22-yard line.

Two plays later, Cody Thacker hauled in a 22-yard pass from Andrew Earl for a touchdown. Jose Medina kicked the extra point to make it a 1-point game.

Umatilla will play at Burns on Friday night.

“That is a big trip for us,” Durfey said. “I don’t care what anyone says, our league is the toughest in the state.”