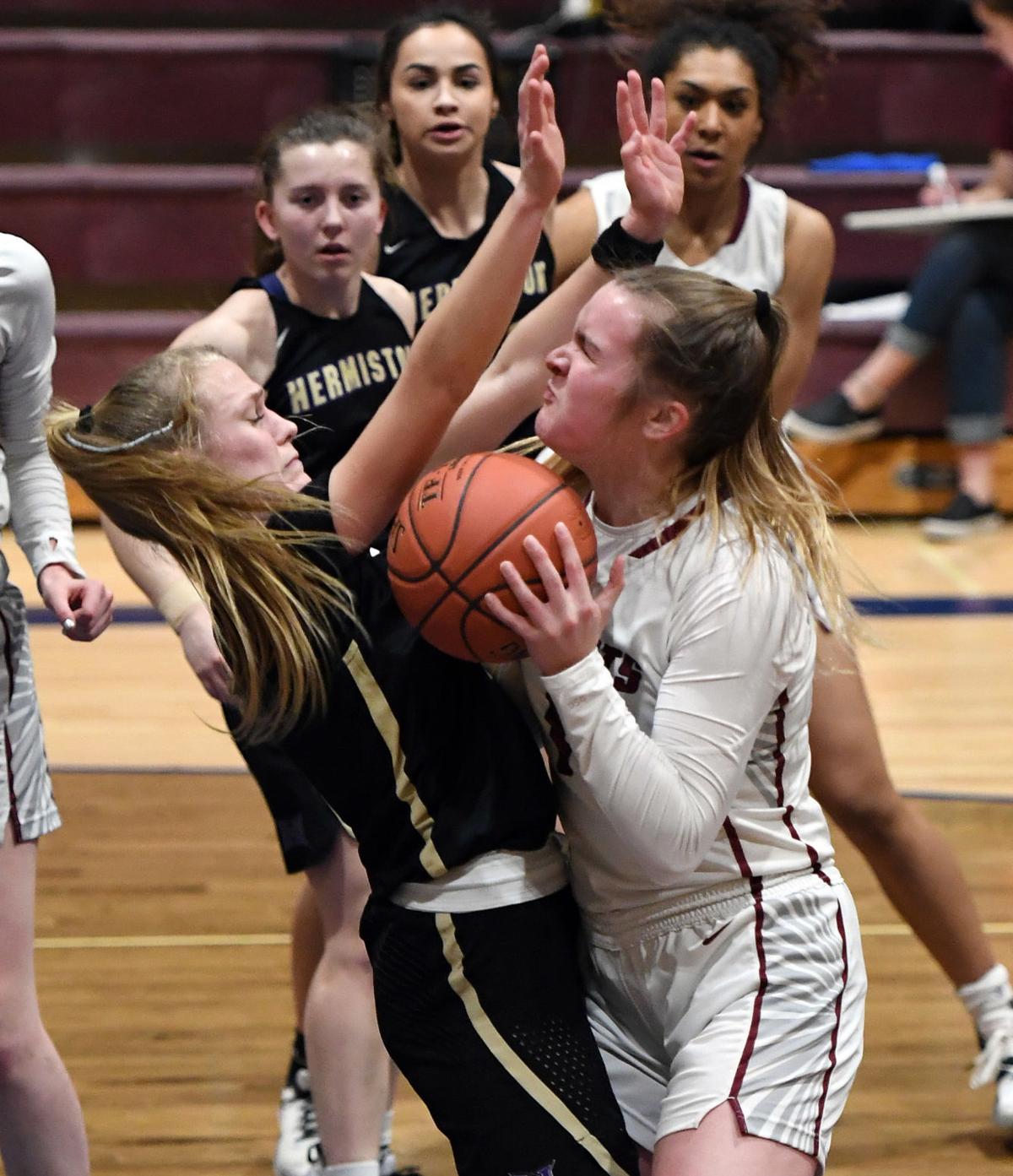 Mt. Spokane forward Jaimyn Sides drives the ball to the basket and into the defense of Hermiston’s Jayden Ray (left) during Friday’s 3A District 8 semifinal game at Mt. Spokane High School. 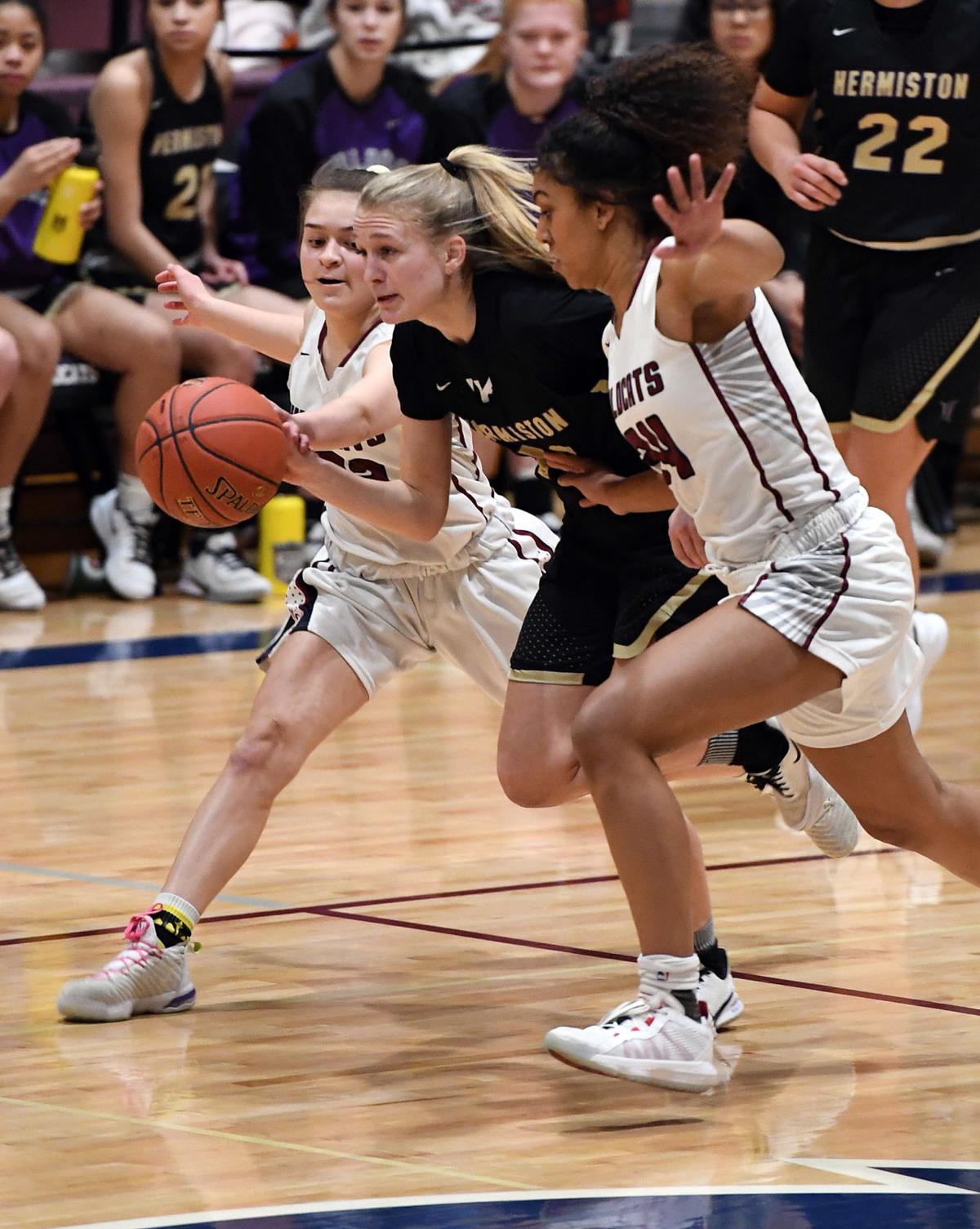 Mt. Spokane forward Jaimyn Sides drives the ball to the basket and into the defense of Hermiston’s Jayden Ray (left) during Friday’s 3A District 8 semifinal game at Mt. Spokane High School.

Hermiston used a stingy defense to hold Mt. Spokane to 15 points under its average, but the Bulldogs had a tough time putting the ball in the basket at the other end.

The Wildcats, the No. 5-ranked team in the state, held on in the second half for a 43-35 win Friday over the Bulldogs in the 3A District 8 semifinals at Mt. Spokane High School.

“I’m proud of the girls for coming out and competing,” Hermiston coach Maloree Moss said, “but we did play a little scared offensively. Defensively, we held a team averaging 58 points to 43, so that was good to see. We have to be more aggressive offensively to beat a team of that caliber.”

The Bulldogs will play Kamiakin in a loser-out game at 9 a.m. Friday at Toyota Center in Kennewick, Washington. The Braves lost a 73-60 game to Kennewick in the other semifinal.

“It’s hard to beat a good team three times,” said Moss, whose team beat Kamiakin 76-50 and 63-39 during Mid-Columbia Conference play. “We will have to bring our ‘A’ game.”

Mt. Spokane (17-3) opened the game with a 3-pointer by Kyara Sayers, but the Bulldogs (14-8) responded with a layup by Jayden Ray and a 3-pointer by Katelyn Heideman for a 5-3 lead.

After the Wildcats tied the score, Jazlyn Romero made good on two free throws for a 7-5 lead — the Bulldogs’ last of the game.

Gracey Neal, Jayda Noble and Emma Main hit consecutive baskets down the stretch to give Mt. Spokane a 13-7 lead after the first quarter.

“I’m super proud of the girls for the way they played in the first quarter,” Moss said. “The second and third were not super great. We got a little tired, which usually doesn’t happen. That hurt us getting back on defense.”

With each team scoring 10 points in the third quarter, the Wildcats kept their lead at nine points — 35-26 — with one quarter to play.

A 3-pointer by Madison Feigum, and a basket by Mia Hernandez cut the Wildcats’ lead to 37-33 early in the fourth quarter.

Hermiston outscored Mt. Spokane 9-8 in the fourth, but could not catch the Wildcats.

“Sadly, we gave up too many second-chance opportunities,” Moss said. “We got hot for a bit, then had some defensive lapses. It was 37-33 for a long time. Then they got two quick ones, and it went from there.”

Noble, who has signed to play at University of Washington, had eight points for the Wildcats, as did Neal and Sophia Bertotti-Metoyer.