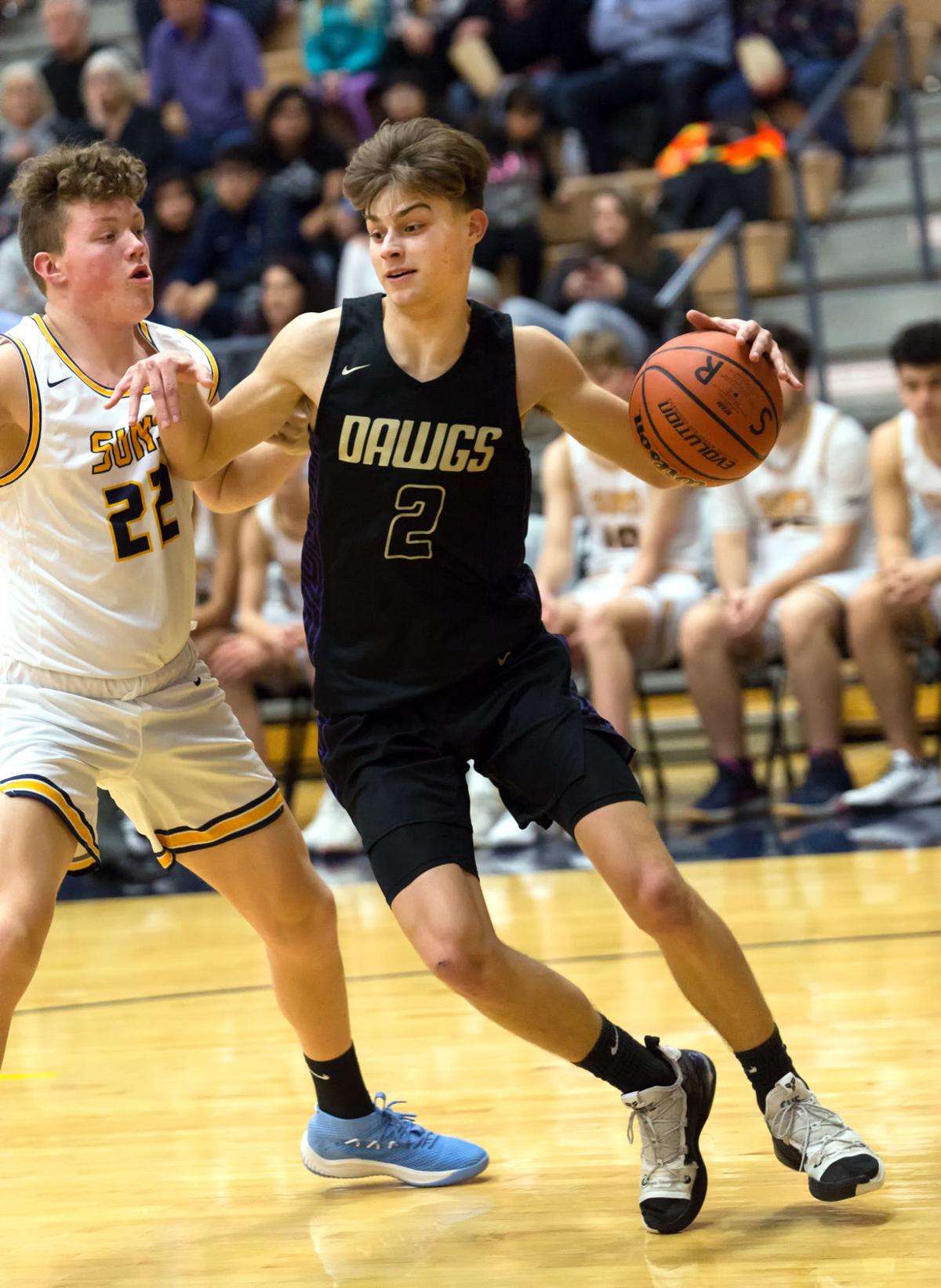 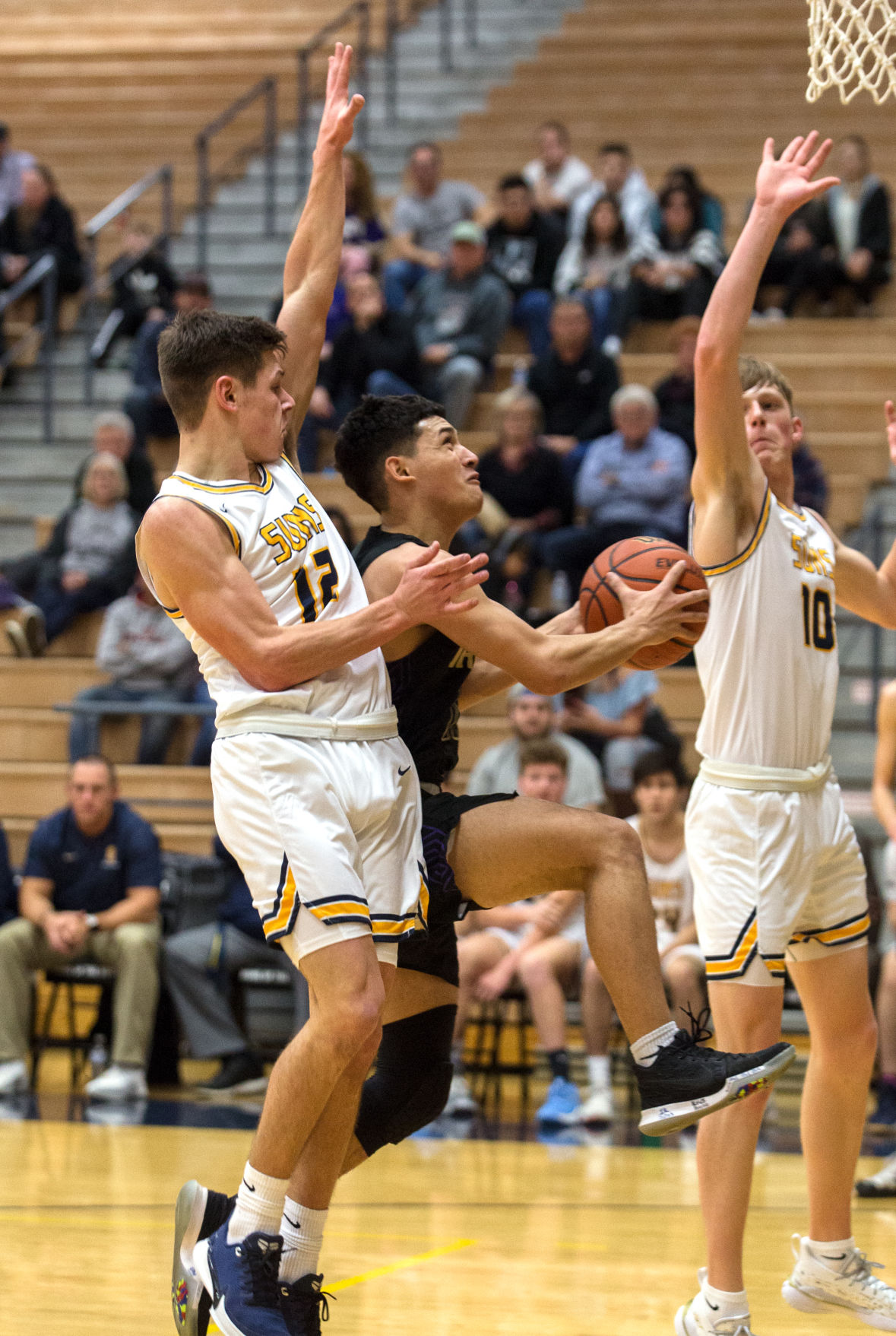 Hermiston’s A.J. Ramos-Barron goes up for a layup despite pressure from Southridge defenders Brendan Beckwith (12) and Ryker Stevens (10) during Friday’s Mid-Columbia Conference game in Kennewick. 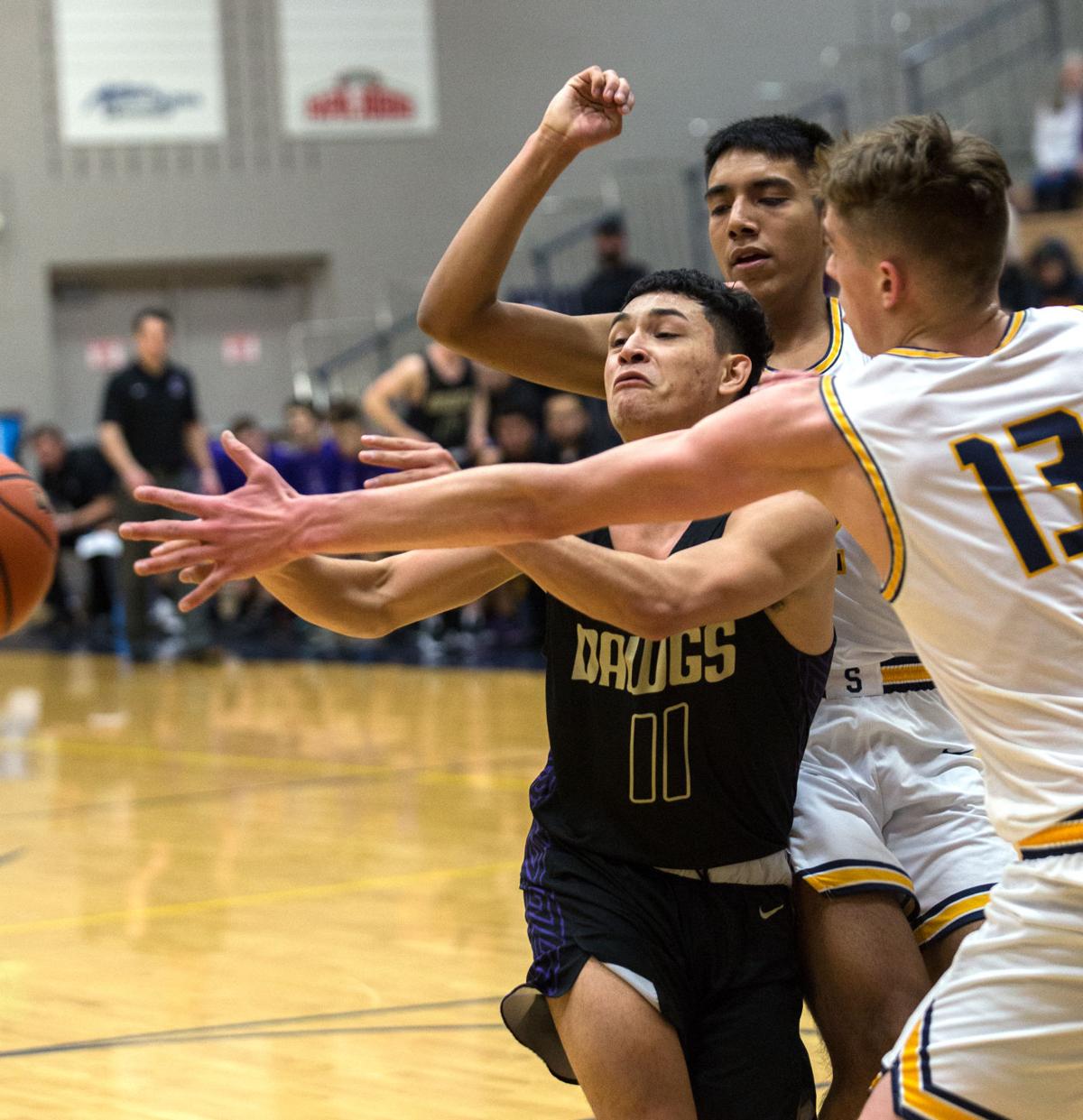 Hermiston’s A.J. Ramos-Barron dishes off to a teammate as he is pressured by Southridge’s Eddie Marines (behind) and Tristan Smith (13) during Friday’s Mid-Columbia Conference game in Kennewick, Wash. 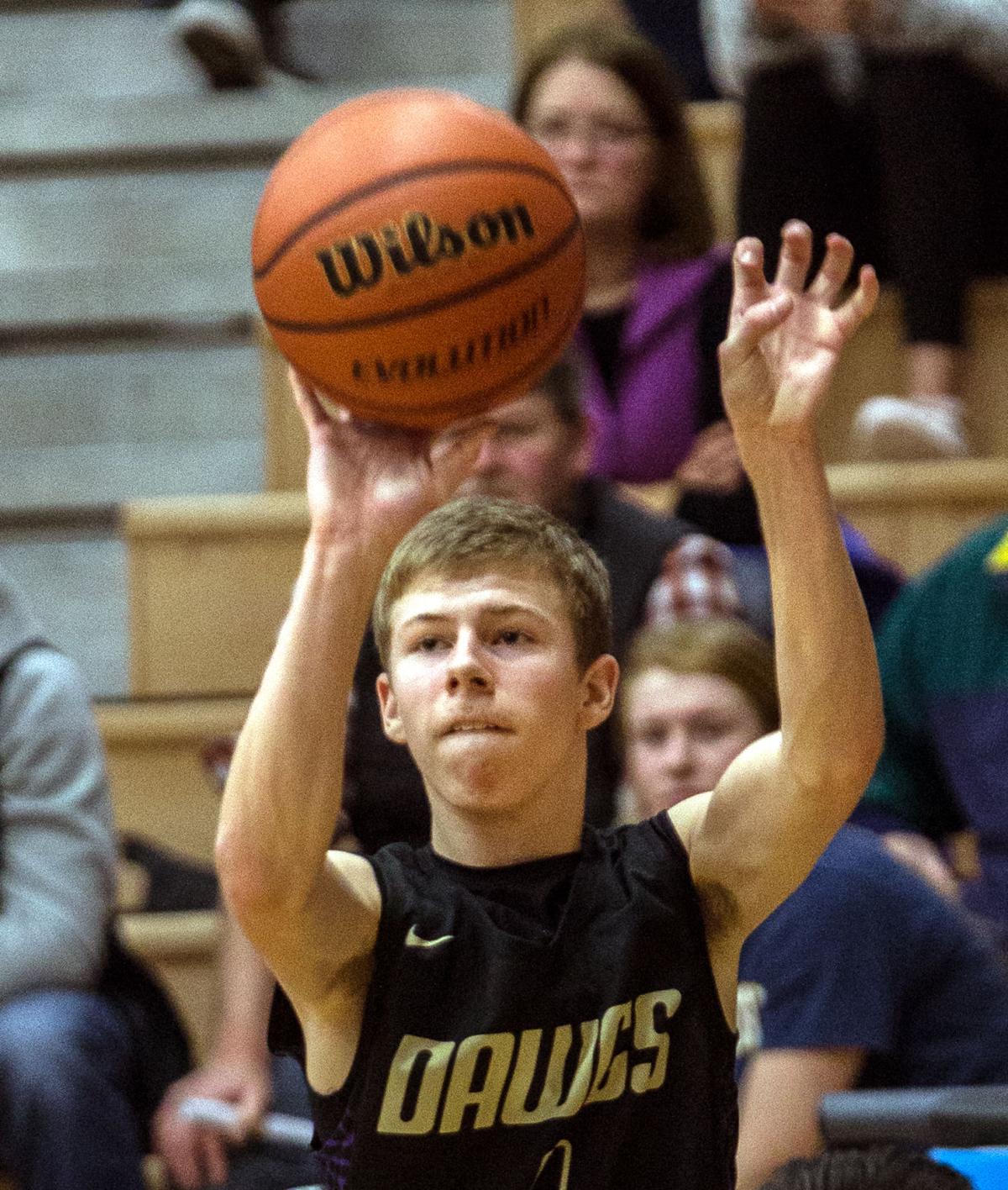 Hermiston’s A.J. Ramos-Barron goes up for a layup despite pressure from Southridge defenders Brendan Beckwith (12) and Ryker Stevens (10) during Friday’s Mid-Columbia Conference game in Kennewick.

Hermiston’s A.J. Ramos-Barron dishes off to a teammate as he is pressured by Southridge’s Eddie Marines (behind) and Tristan Smith (13) during Friday’s Mid-Columbia Conference game in Kennewick, Wash.

Hermiston coach Drew Preuninger knows his team does not have an inside presence to combat the likes of Southridge’s 6-foot-6 Tristan Smith, but he does expect the Bulldogs to implement their game plan.

Smith torched the Bulldogs for 28 points Friday night in leading the Suns to a 54-44 Mid-Columbia Conference win over the Bulldogs. It was Southridge’s first MCC win.

“I feel we could have been tougher,” Preuninger said. “We didn’t front players, we didn’t have any backside help. It comes down to executing our game plan.”

Ruloph had 10 of his team-high 19 points in the first quarter.

The Bulldogs welcomed Chase Elliott to the floor with 1:39 remaining in the first quarter. Elliott broke his leg Sept. 6, 2019, against Pasco in the first football game of the season. He finished with two points.

In the second, Ruloph opened things up with a 3 from the left baseline for a 16-14 Hermiston lead, only to see Ryker Stevens step outside for a 3 of his own for a 17-16 Southridge lead.

Sergio Madrigal drove the lane for a basket to give the Bulldogs an 18-17 advantage — their last of the game.

From there, Smith scored seven points to help the Suns to a 28-22 lead at the half.

Ruloph hit a 3, and Madrigal made one of two free throws to account for Hermiston’s four points in the third quarter as the Bulldogs fell behind 39-26 with one quarter to play.

The Bulldogs went on an 18-15 run in the fourth quarter, getting five points each from Madrigal and Trent Pitney, but it would not be enough.

“I appreciate them not giving up,” Preuninger said. “I’m proud of them — they battled and did not give up.”

“Jaiden has been shooting really well all year,” he said. “We just need someone else to step up. For us to win, we have to win as a team.”

A.J. Ramos-Barron added 10 points and four rebounds for the Bulldogs, while Madrigal had eight points.

Smith scored 18 of his 28 points in the first half. He was the only Southridge player in double figures.

“We put a lot of effort on stopping (Donavyn) Perry and Smith,” Preuninger said. “We did a good job on Perry (two points).”

HANFORD 71, HERMISTON 56 — The Bulldogs trailed early, and faced a 40-24 deficit in the third quarter, as the visiting Falcons cruised to a Mid-Columbia Conference victory Saturday.

Turner Clayton scored a game-high 22 points for the Falcons.