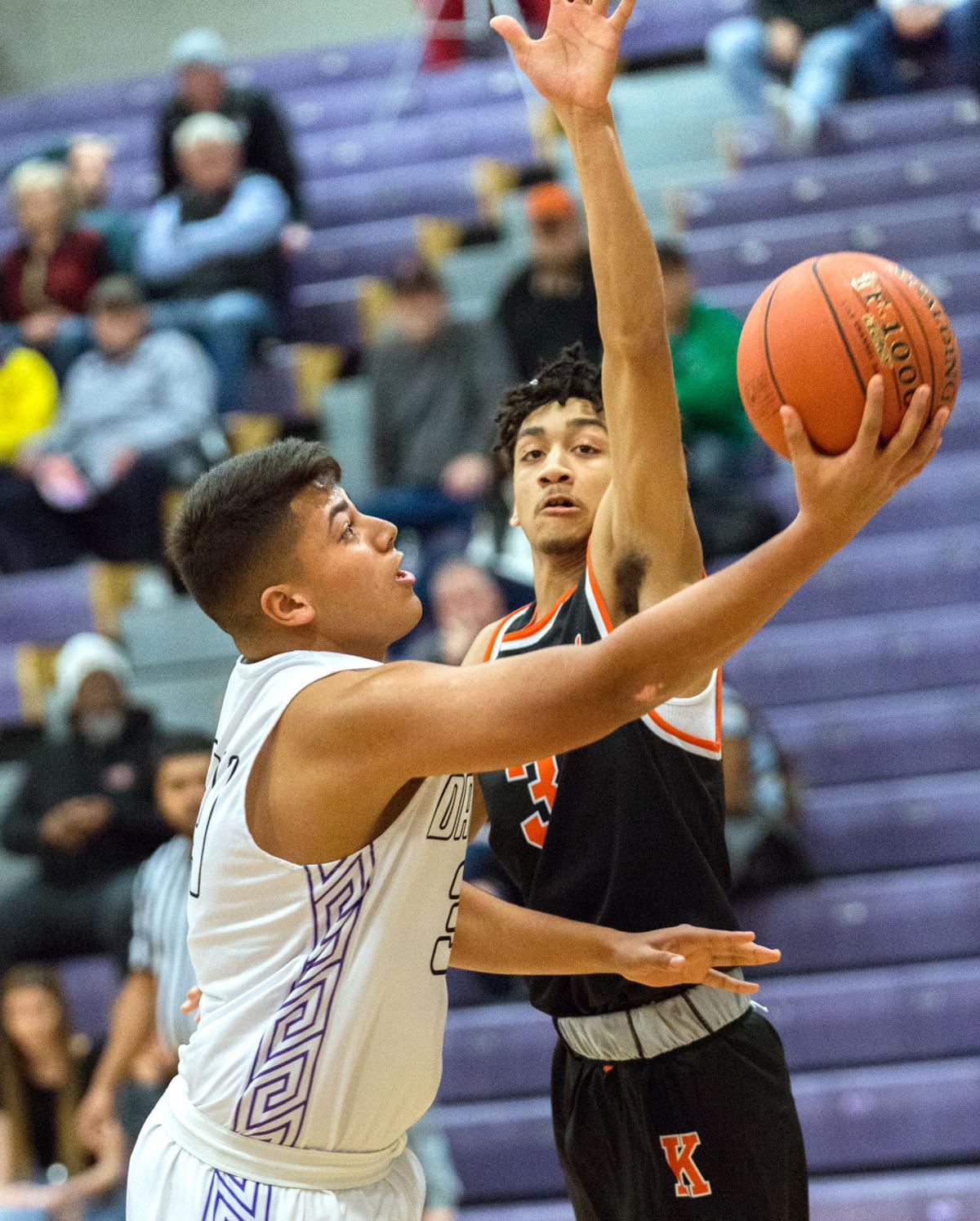 Hermiston’s Jaime Ramirez puts up a shot as Kennewick’s Ayoni Benavidez defends during Saturday’s game at the Dawg House. 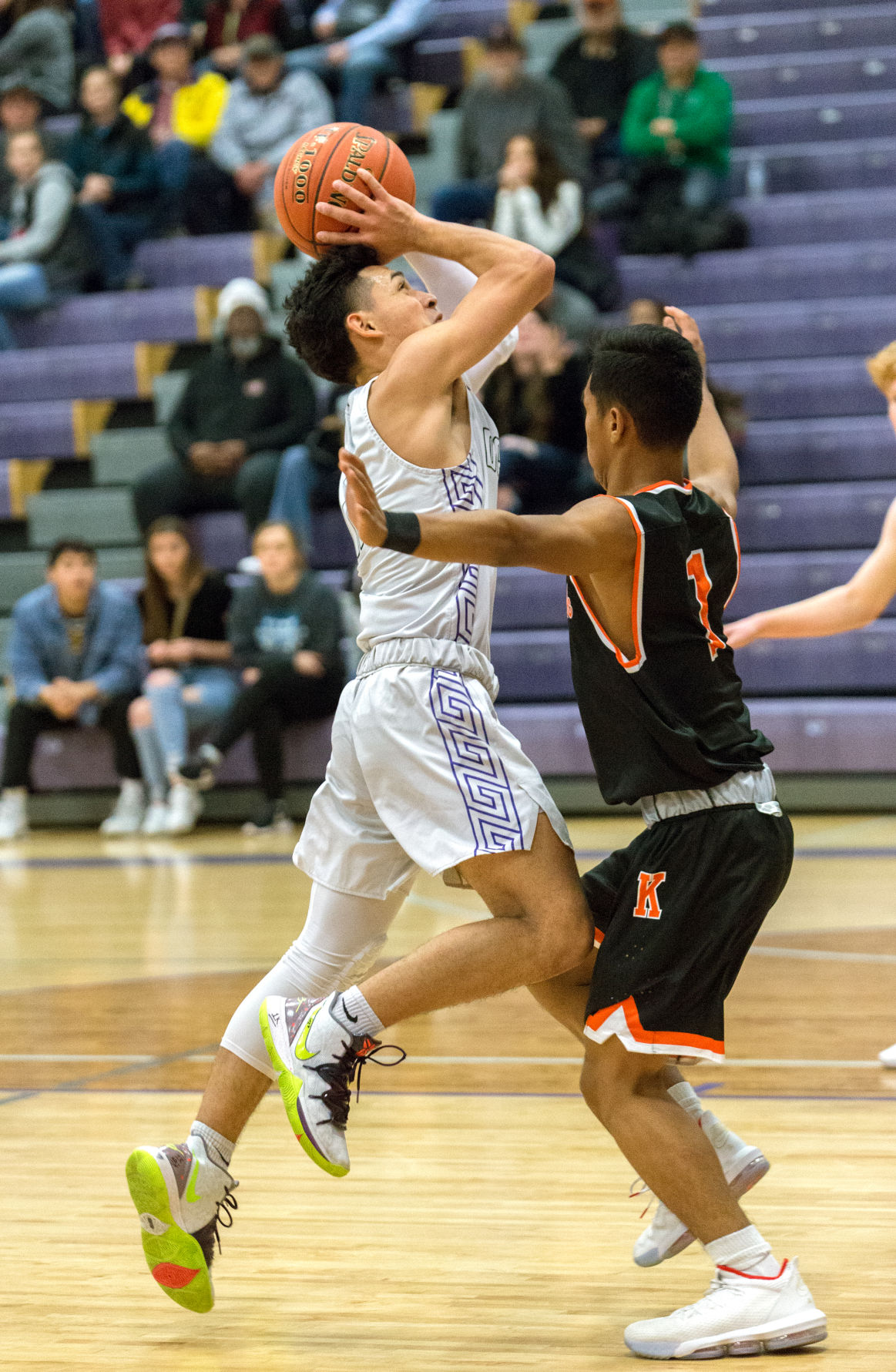 Hermiston’s A.J. Ramos-Barron goes to the hoop during Saturday’s game against the Kennewick Lions. 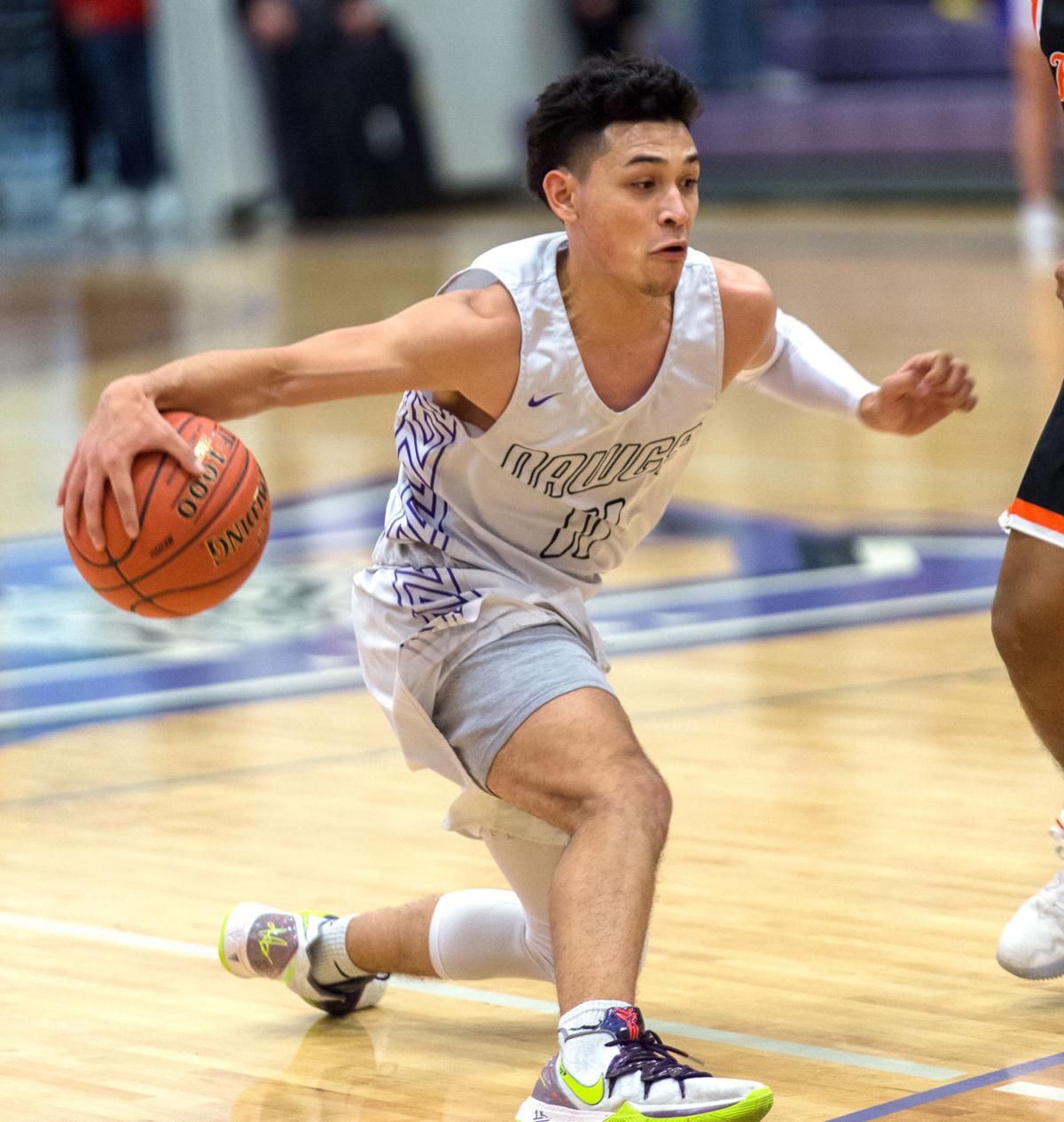 Hermiston’s A.J. Ramos-Barron brings the ball down the court during Saturday’s game against the Kennewick Lions.

Hermiston’s Jaime Ramirez puts up a shot as Kennewick’s Ayoni Benavidez defends during Saturday’s game at the Dawg House.

Hermiston’s A.J. Ramos-Barron goes to the hoop during Saturday’s game against the Kennewick Lions.

Hermiston’s A.J. Ramos-Barron brings the ball down the court during Saturday’s game against the Kennewick Lions.

For three quarters, Hermiston played basket for basket with Kennewick, but a slow third quarter did the Bulldogs in.

Ayoni Benavidez scored a career-high 33 points, and the Lions held the Bulldogs to just six points in the third quarter as they cruised to a 72-59 Mid-Columbia Conference victory Saturday night at the Dawg House.

“The third quarter, we came out flat,” Hermiston coach Drew Preuninger said. “We needed to play smarter offensively and defensively. I have been so proud of these kids. They are proving people wrong. They never give up.”

The game was the MCC opener for the Lions.

“We came out with some renewed focus,” Kennewick Braydn Leyde said the third quarter. “We weren’t happy with how we played in the first half. Holding them to six points was the turning point.”

Hermiston, which won its MCC opener Friday at Pasco, trailed 20-18 after the first quarter.

Benavidez, who was held to just three points the first 6:35 of the game, scored the final eight points of the quarter for the 20-18 lead.

The Kennewick senior continued his scoring spree in the second, pouring in 15 points at the Lions led 39-36 at the half.

“He is really shifty and he is very smooth,” Leyde said of Benavidez, who had six 3-pointers on the night. “He can play inside and outside.”

The Lions went on a 16-6 run in the third quarter to take a 55-42 lead. Myles Mayovsky had eight of his 10 points in the quarter, and Kennewick got quality minutes off the bench by Jagger Childs.

“Jagger is just coming back from football, and so is Baylor (McElroy),” Leyde said. “They are starting to get their basketball legs, and their height (Jagger is 6-4, and McElroy is 6-5) helps out.”

The Bulldogs rallied the troops and played even ball with the Lions in the fourth.

“Tonight, we competed with the Kennewick, and proved to people we can compete with them,” Preuninger said. “Even though we lost, everyone in the gym is surprised with how well we played.”

Rangel led the Bulldogs with 16 points, and Ruloph added 13 and Trent Pitney 12.

“We know we can compete with a lot of teams in the league,” Rangel said. “They had us on size the whole game, but we were quicker. We failed to use that to our advantage. We just need to finish what we start.”

Preuninger got his first taste of the Mid-Columbia Conference on Friday, and his team came away with a 57-53 road win over Pasco.

“We talked about this game all week,” Preuninger said.

“We were the only ones playing tonight, and if we won we’d be leading the league — for at least a day.”

Pasco cut the deficit to 45-34 after three quarters, but could not catch the Dawgs down the stretch.

“We are very inexperienced,” Preuninger said. “We hadn’t been in that situation before (holding onto a lead late). We turned the ball over and took too quick of shots, and we weren’t making them. It was a super fun game for our kids to go through this early in the season.”