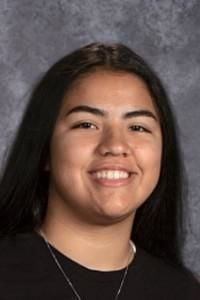 Basketball season may be over for most, but for two Hermiston players, there is one more game to go.

Senior Jazlyn Romero and sophomore Chase Elliott were selected to play in the SWX All-Star Classic on Sunday at Kamiakin High School in Kennewick.

“It will be exciting, there is a lot of talent in the Mid-Columbia Conference,” said Romero, who is playing in her first Classic. “I didn’t really expect it. Obviously, I’m not too happy with how my career ended. This is a redemption game. It will be fun.”

Elliott is one of two sophomores on the roster.

“I was definitely surprised with there being so many good kids in the league,” Elliott said of the invite. “I didn’t even play the whole season.”

Elliott, who broke his left leg in football, missed all of the Bulldogs’ December games before returning Jan. 3 against Southridge.

The Classic, in its 25th year, pits the Tri-City area schools against those from Yakima. The Tri-City girls hold a 20-8 advantage, and have won the past 10 games. The Yakima boys lead the series 22-6.

In the early years of the event, there were separate games for the large and small schools. Now they are combined.

Elliott, who led the Bulldogs in scoring with 12.15 points a game, said he went on YouTube to watch some of the past games to get a feel for what he is in for.

“I have to not play scared,” he said. “It’s an all-star game — it’s flashy and the best players in the league are out there. It will be extremely nice to play with the kids who dominated us all season.”

Elliott will get to play with, instead of against, Kamiakin’s 6-foot-9 Kyson Rose, and Chiawana’s 6-6 Cooper DeWitt.

“I’ve never had a center that big,” Elliott said of Rose.

Romero, who has signed to throw the javelin at Oregon State University, will lace up her sneakers one last time.

“I was in weight room and I got a text from the SWX guy,” said Romero, who averaged 11.75 points a game. “I showed it to coach (Emilee) Strot, and she said, ‘You get one more game, that’s awesome.’ It’s my last game ever. I’m just going to go out and have some fun.”

The girls game will tip off at 4 p.m., with the boys game to follow. The event also will feature a 3-point shooting contest between the boys and the girls.

Admission is $5 for adults and $3 for students and seniors.

Hermiston High School graduation is one for the history books