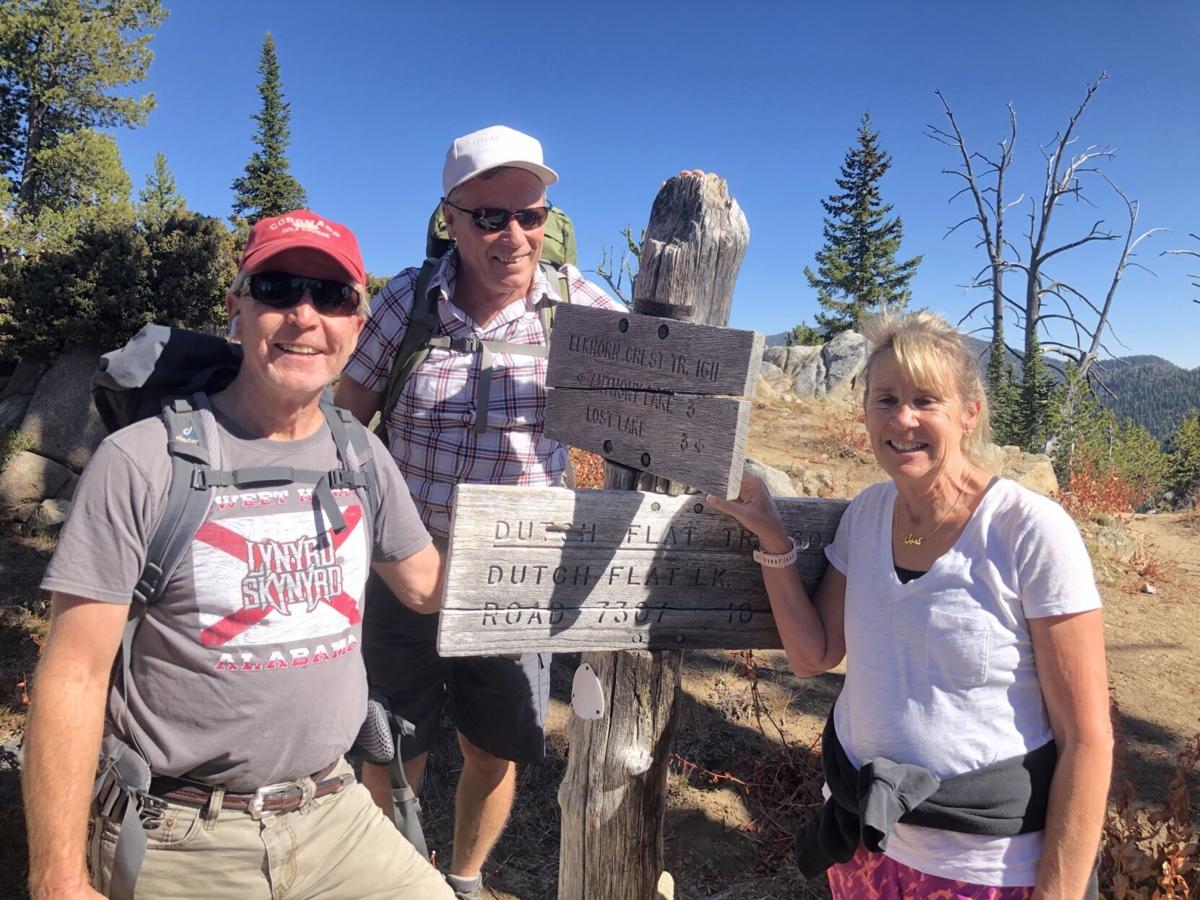 From left, Rocky Brown, Fred Warner and Cammy Warner at Dutch Flat Saddle, along the Elkhorn Crest Trail in the Elkhorn Mountains northwest of Baker City. 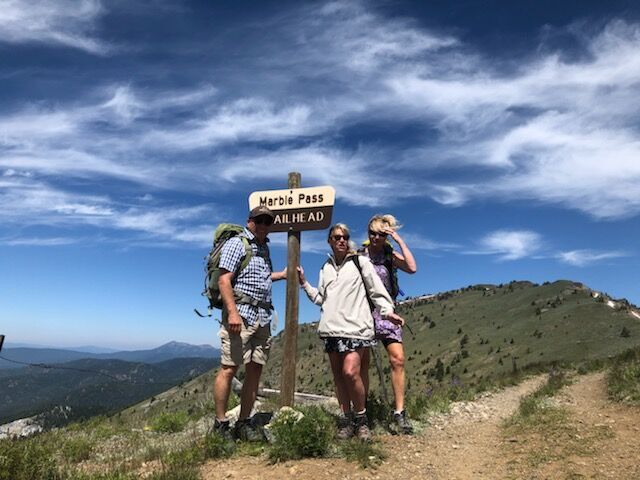 From left: Fred Warner, Cammy Warner and Diana Brown at Marble Creek Pass in the Elkhorn Mountains near Baker City. 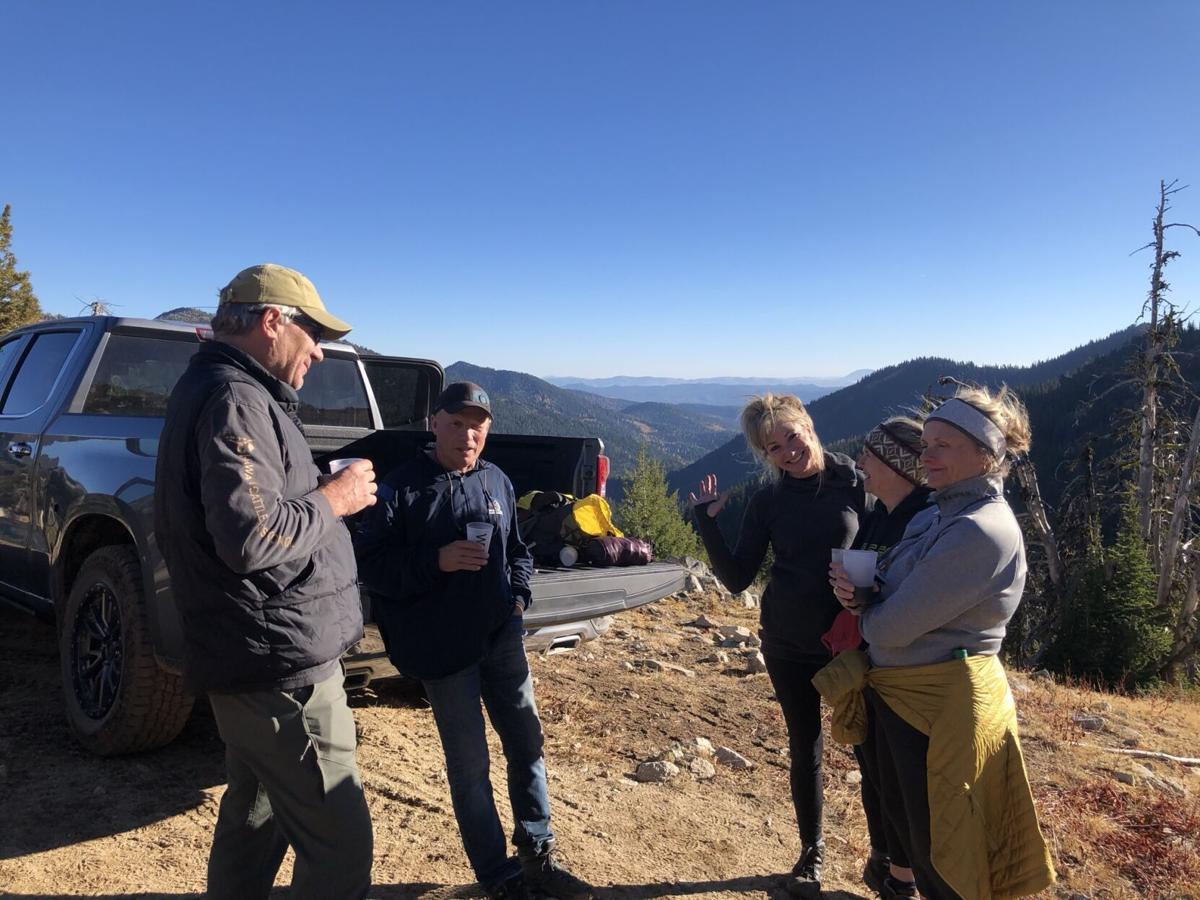 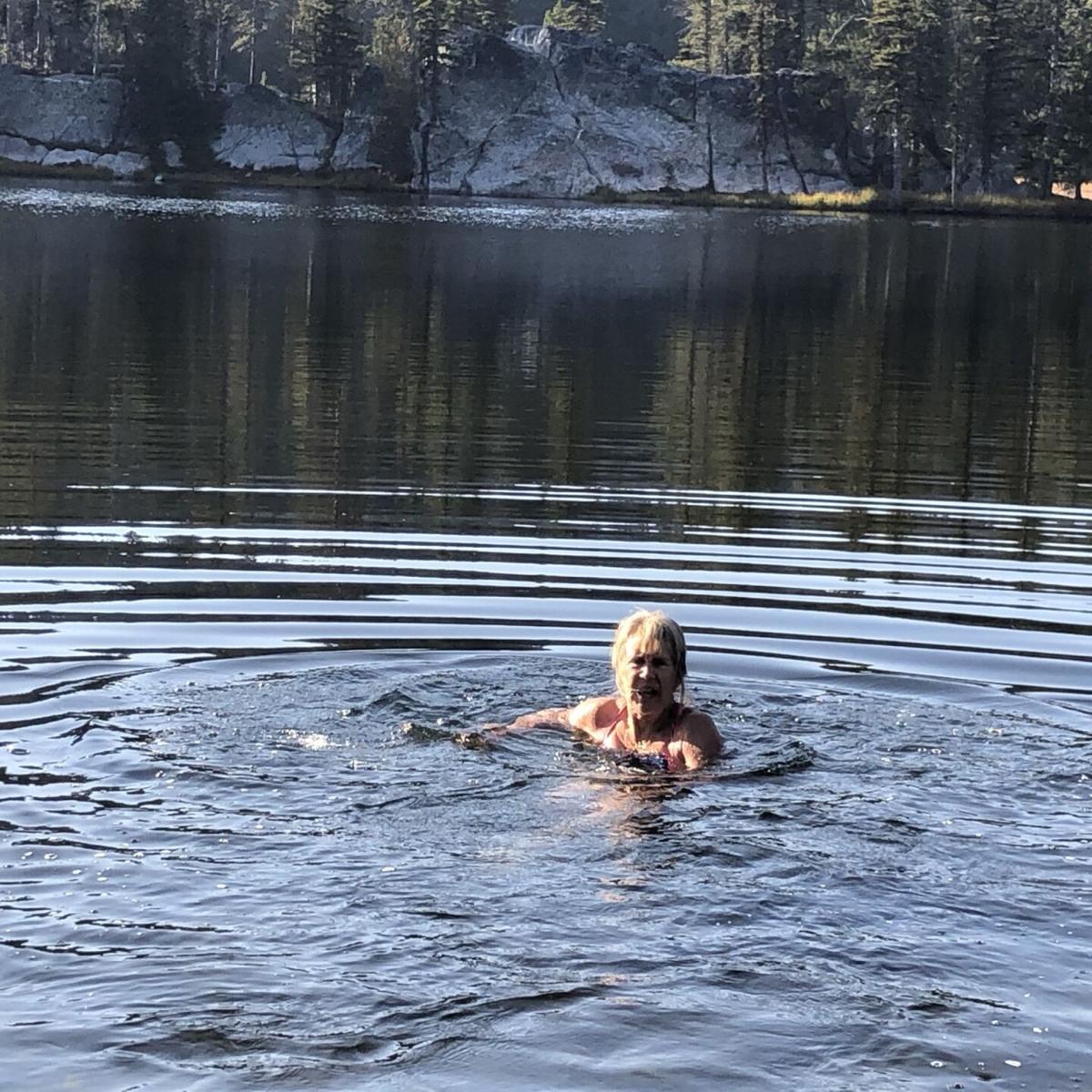 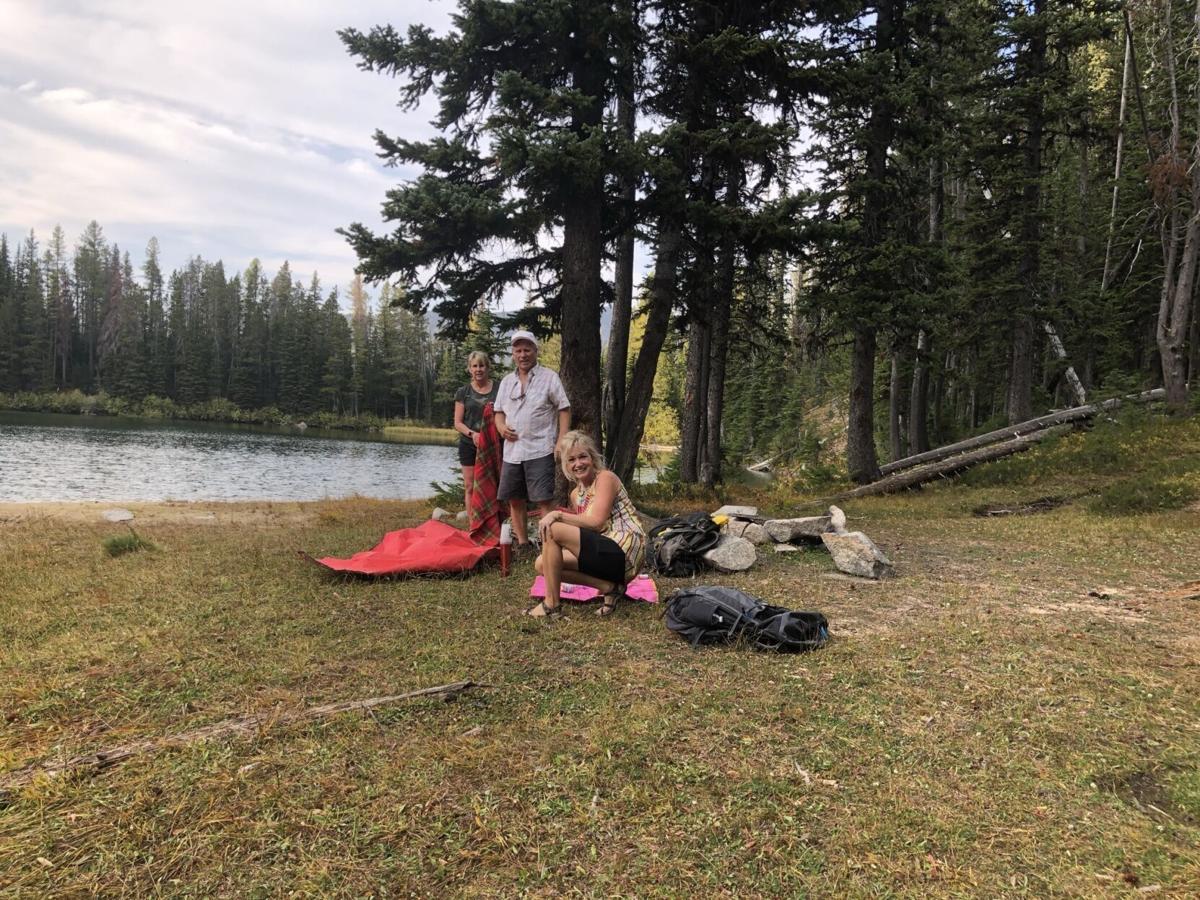 From left: Cammy Warner, Fred Warner and Diana Brown at Baldy Lake in the Elkhorn Mountains.

From left, Rocky Brown, Fred Warner and Cammy Warner at Dutch Flat Saddle, along the Elkhorn Crest Trail in the Elkhorn Mountains northwest of Baker City.

From left: Fred Warner, Cammy Warner and Diana Brown at Marble Creek Pass in the Elkhorn Mountains near Baker City.

From left: Cammy Warner, Fred Warner and Diana Brown at Baldy Lake in the Elkhorn Mountains.

The wind-snapped tree crashed down across the mountain trail, close enough to Diana Brown that she felt the ground tremble.

That she happened to be there at that moment, the scent of pine on the air, was due to another collision.

A very different sort of collision, that was, a silent encounter involving items so small you’d need an electron microscope to see them.

If not for a coronavirus particle invading a human cell most of the way around the world some months before, Brown almost certainly wouldn’t have been hiking the Rock Creek trail, in the Elkhorn Mountains about a dozen miles northwest of Baker City, on that blustery day in early September 2020.

But such is the nature of a worldwide pandemic.

That hike was one of more than a dozen that Diana and her husband, Rocky, went on because COVID-19 had prompted them to postpone vacations and instead spend much of 2020 exploring the dramatic mountains they see every day.

The Browns were accompanied on most of these excursions by two other Baker City couples — Fred and Cammy Warner, and John and Molly Wilson.

They’ve all been friends for many years.

They’ve hiked and snowshoed together in the Elkhorns.

“Because of the pandemic there wasn’t the usual golf games, and no travel,” says Diana, 58. “We were here every weekend. It just became a given that every Sunday we hiked somewhere. We’d never hiked so much because we couldn’t go anywhere else. That’s what COVID did for us.”

The experience strengthened the already strong friendship among the three couples, and it solidified their mutual interest in staying in shape.

“It brought us all closer together,” says Rocky, 64.

And it didn’t take them far from home.

The Elkhorns, which dominate the view from Baker Valley, rise precipitously from the western edge of the valley just half a dozen miles from Baker City.

The range has a network of hiking trails, some less than a half-hour’s drive from town.

“We’re lucky to live where we live,” Diana said.

Lakes are an integral part of this tale.

Cammy, who enjoys swimming even in the frigid waters of the alpine lakes in the Elkhorns, most of which are at elevations about 6,500 feet, recalled reading a story about the practice of “lake bagging.”

The idea is similar to “peak bagging” — seeing how many summits you can stand atop.

Except with lakes, Rocky says with a slight shiver, it’s not sufficient to merely reach the shore, or even to dip a toe in the water.

You have to get in.

All the way in.

Rocky insists that Killamacue Lake in the Elkhorns is the chilliest he’s visited.

The three couples, along with some of their children, hiked the three and a half miles to the lake on July 26, 2020.

“I don’t know how you can say that,” retorts Rocky, who’s sitting across the room. “It’s so cold.”

Late in the summer, Rocky says, the group of friends realized that they had visited half of the dozen main lakes in the Elkhorns.

And snow sometimes accumulates to prodigious depths in the Elkhorns as early as September.

But the couples decided they would try to visit the rest of the lakes on their list — and bag them, at least in Cammy’s case — before the snow could be measured in feet.

“We said, let’s see how many we can get before the year’s over,” Rocky says.

On Sept. 2 the Browns and the Warners hiked to Crawfish Lake, on the west side of the Elkhorns near the Anthony Lakes ski area.

Five days later the Browns and the Wilsons, who are both 65, along with multiple other family members, made the trek to Rock Creek Lake. That was the day of the great windstorm.

They had read the forecast, Diana says, but the gusts weren’t supposed to start until afternoon.

The group was on the way back to the trailhead when they heard what they initially mistook for the report of a rifle.

But they knew the deer-hunting season wouldn’t start for a few weeks.

They quickly recognized the actual source of the sound was a great tree, toppled by the wind.

They heard several others fall.

And then they saw the tree tumble just ahead.

“It was fascinating and terrifying,” Diana says.

On the drive home they encountered one large tree that had fallen across the dilapidated road that leads out of the Elkhorns.

Fortunately Rocky and John Wilson were able to wrap a tow strap around the trunk and use their pickup truck to pull it far enough to let them pass.

It was just one of many memories the group made during their summer in the mountains.

“We had a lot of fun adventures,” Rocky says. “And we had some excitement along the way.”

The Browns, Warners and Wilsons visited their 11th lake, Summit Lake, on Nov. 1.

Two weeks later the couples had swapped their hiking boots for snowshoes, as winter made its inevitable arrival in the Elkhorns.

The lone lake remaining on their list, aptly enough, is Lost Lake.

As its name implies, the lake, near the center of the Elkhorns, is one of the more difficult to reach — the shortest trail is accessible only via a road that might give a mountain goat pause, and the trail that’s easy to drive to is about seven miles from the lake.

Although the Browns and the Warners said they hope some of the events the pandemic prevented in 2020 will return in 2021 — such as Baker City’s annual Miners Jubilee and bull and bronc riding competitions in July — they’re certain that the camaraderie they forged will continue even as the virus retreats.

The friends probably will expand their list to include the Wallowa Mountains, not far to the northeast from Baker City, a range that boasts, to Cammy’s delight, several dozen lakes.

The couples’ affinity for hiking is not likely to dissipate.

“Now it’s all about hiking boots and Lifestraws,” she says, the latter being a water purifier that you can drink from like a straw.

No one, of course, wished for anything like the COVID-19 pandemic.

But Rocky says he’s glad that something positive came from an otherwise dreadful situation that has upended so much that people had taken for granted.

The weekend outings, he said, “have been a good thing for all us. It keeps us in a lot better shape.”