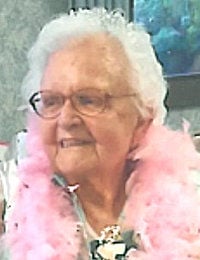 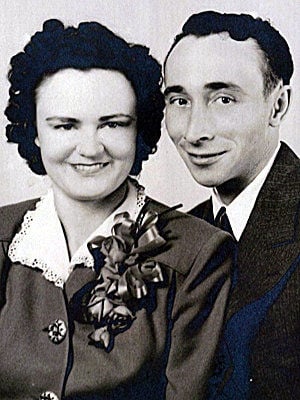 Elvira B. “Elvy” Eisele was born July 28, 1917, to parents Herbert and Mayme Opoien Schindele. She died on Sept. 23, 2018, in Pendleton, Oregon, at the age of 101. Elvy was born at home at the family farm near Tolna, North Dakota, and as was the custom at that time she was delivered by her paternal aunt.

She attended grade school in a one room schoolhouse in Tolna and attended high school in Pekin, North Dakota — living with family during the week and returning home on the weekends. She graduated from Pekin High School in 1934. She told many stories of how her family devised ways to survive the Depression and was grateful that they lived on a farm, which helped them survive. As the oldest of seven children, it was often her job to look after her younger siblings — always an adventure.

After high school, she worked in Warwick, North Dakota, in a restaurant and a post office. In 1940, she and her sister set out for Spokane, Washington, and eventually Portland, Oregon, to work in the shipyards. During this time, the trains were very full with servicemen also traveling and they would often have to sit on their suitcases until seats became available. In Portland, she worked in the shipyards learning to wire ships from top to bottom. In Portland, she also met the love her life, Gordon Eisele, who was living in the same boardinghouse. They were married June 28, 1944, in Vancouver, Washington.

They eventually settled in Umatilla, Oregon, where they built small cabins for construction workers to live in while building McNary Dam. Elvy was a hard working stay at home mom while her children were small and her husband worked for the Corps of Engineers. Having survived the Depression, she was “green” before it was popular. The phrase “reuse-reduce-recycle” was a part of her life. You did not throw away something if it could be fixed or re-purposed for something else. She found new ways to fix leftovers and anything left after that went in the compost pile.

Elvy worked for 20 years as a “cafeteria lady” for the Umatilla School District. She made many close, lifelong friends while working there. She was a member of the Umatilla Fireman’s Auxiliary, Den mother for her son’s Cub Scout troops and was a Blue Bird leader. She quilted with her church group for World Relief. She enjoyed crafting with her craft group, reading, gardening and camping and traveling. She enjoyed trips to Hawaii, Europe and Scandinavia as well as traveling across the U.S. She was generous with her vegetables, fruit, berries and glorious roses. She was a lifelong member of the Lutheran church, most recently Grace and Mercy in Hermiston, Oregon.

Her greatest joy was her family, children, grandchildren and her precious great-grandchildren. She was never happier than to have them in her life.

She is predeceased by her parents, husband, Gordon; sons, Albert and Bruce; and brothers, Roger, Delbert, Harold Schindele; and sister, Carole Trostad.

A graveside services will be Monday, Oct. 1 at 1 p.m. at the Umatilla Cemetery, Umatilla, Oregon.

“She always leaned to watch for us

Anxious if we were late

In winter by the window

In summer by the gate

And though we mocked her tenderly

Who had such foolish care.

Because she waited there

Her thoughts were all so full of us,

She never could forget

And so we think that where she is

She must be watching yet.

Waiting ‘til we come home to her

Anxious if we are late

Please sign the online condolence book at burnsmortuaryhermiston.com Burns Mortuary of Hermiston, Oregon, is in care of arrangements.