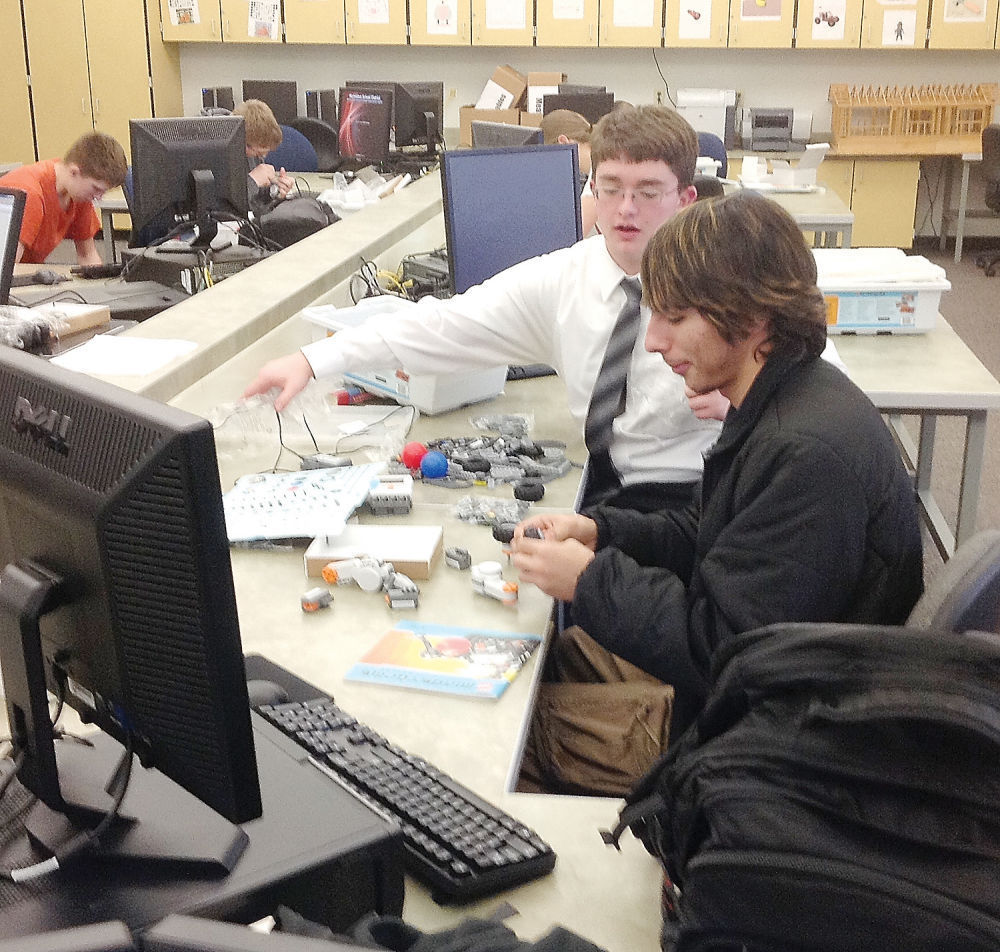 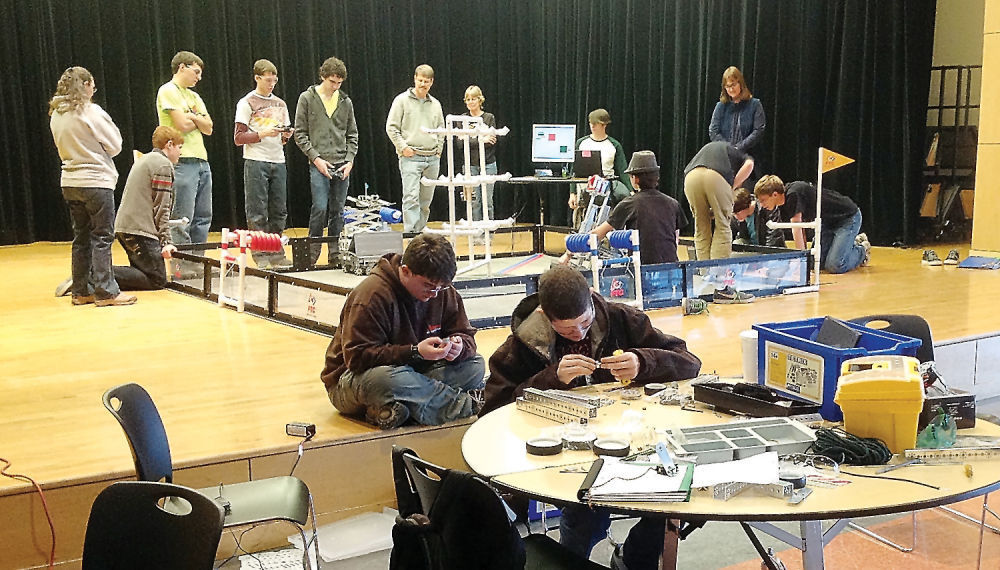 <p>As many as 18 Hermiston High School students have participated in robotics club meetings and practices since the club was revitalized this school year. Students and mentors built a diamond-shaped playing field to practice on, similar to the one they will see at competitions.</p> 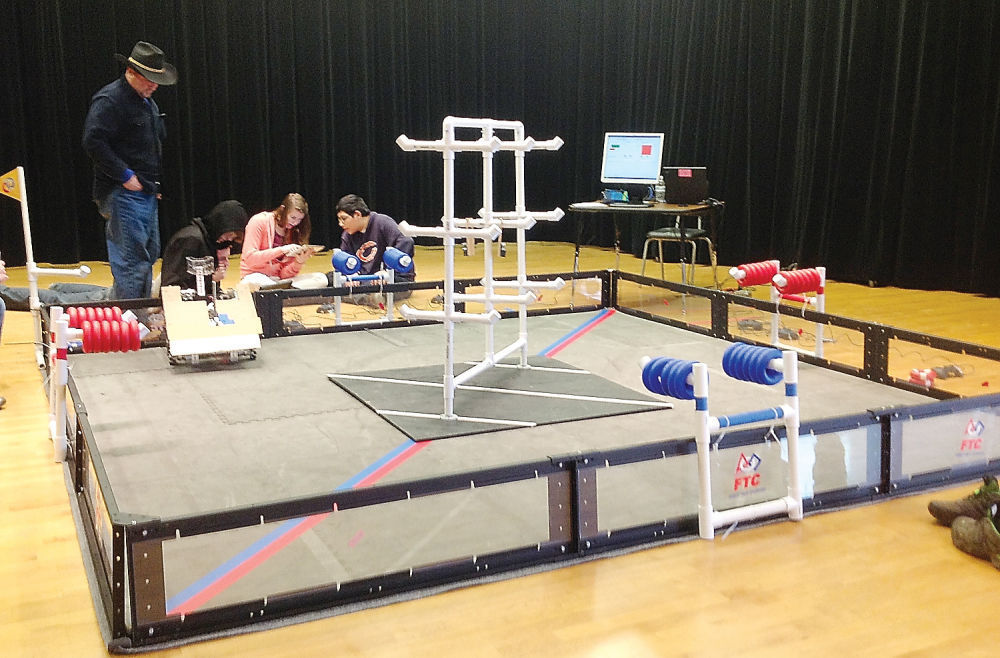 <p>This year, Hermiston High is working toward the FIRST Tech Challenge "Ring It Up" competition. Students and mentors have built a diamond-shaped playing field to practice on, similar to the one they will see at competitions.</p>

<p>As many as 18 Hermiston High School students have participated in robotics club meetings and practices since the club was revitalized this school year. Students and mentors built a diamond-shaped playing field to practice on, similar to the one they will see at competitions.</p>

<p>This year, Hermiston High is working toward the FIRST Tech Challenge "Ring It Up" competition. Students and mentors have built a diamond-shaped playing field to practice on, similar to the one they will see at competitions.</p>

At Hermiston High School, a group of students have transformed a kit of metal, gears and formed pieces into a functional robot, and next month, the team will put their skills to the test in the FIRST Tech Challenge.

FIRST  For Inspiration and Recognition of Science and Technology  is a nonprofit organization founded to promote student interest and participation in science and technology, and the FTC is one of the nationwide competitions the organization hosts each year.

Although Hermiston has hosted a robotics club in the past, the club has not been active for a number of years. In the fall, administration approached Curt Burger, the computer-aided design and drafting instructor, about the opportunity. Berger began advertising the club, and 18 students responded.

Now, eight of those students are committed to a team ready to take on two competitions in February.

Weve got a robot that runs, but weve got a long ways to go, Berger said Friday. Were excited every time something new happens. Were going rapidly. Its really quite amazing what theyre able to do.

The Hermiston team plans to compete in two FTC qualifying events this year: Feb. 15 at Hood River Valley High School and Feb. 23 at OMSI. The students robotic creation will compete against other schools in this years theme challenge: Ring It Up. The primary challenge will be to build and program a robot, about the size of a remote-controlled car, capable of picking up rings and placing them on a PVC pipe structure in the center of the playing field.

At the competition, the team will have 2 minutes to grab as many rings as possible and add them to the stand.

The coach and the students are learning the process quickly, however.

Cody Ray Hoeft, a senior, is one of those students. Learning how to do everything is a challenge. Theres a lot of work to figure things out, he said Friday. Thats interesting to me, doing something no one else knowns how to do. No one in the school has ever done a program like this.

Hoeft, an aspiring engineer, said he joined the club to gain experience for his future career.

Getting some sort of experience, thats what started it, but then it was more fun than I expected, so I went with it, he said. I told my parents and grandparents about it, and they almost dont believe me that were building a robot.

For Hoeft, the biggest challenge for the team is simple: time.

Were starting a lot later than most schools. We have two weeks for something most schools have had three months, he said.

The students in the robotics club have also had to focus and dedicate time to learning the information and thinking ahead.

This is not one of the activities you just go to once a week and when you leave you dont think about it. This is something you have to keep thinking about, Hoeft said.

The club plans to continue meeting after the competition ends.

We have a lot of things we can learn in between seasons, Hoeft said. Theres a lot to work on.

For Berger, the club has already shown rewards by expanding student opportunities.

Theres a lot of scholarship opportunities here (through FIRST), but its also to open up the eyes of young students of what careers are available in engineering, Berger said. As soon as these guys take a bucket of bolts, put it together and it moves, its very exciting.