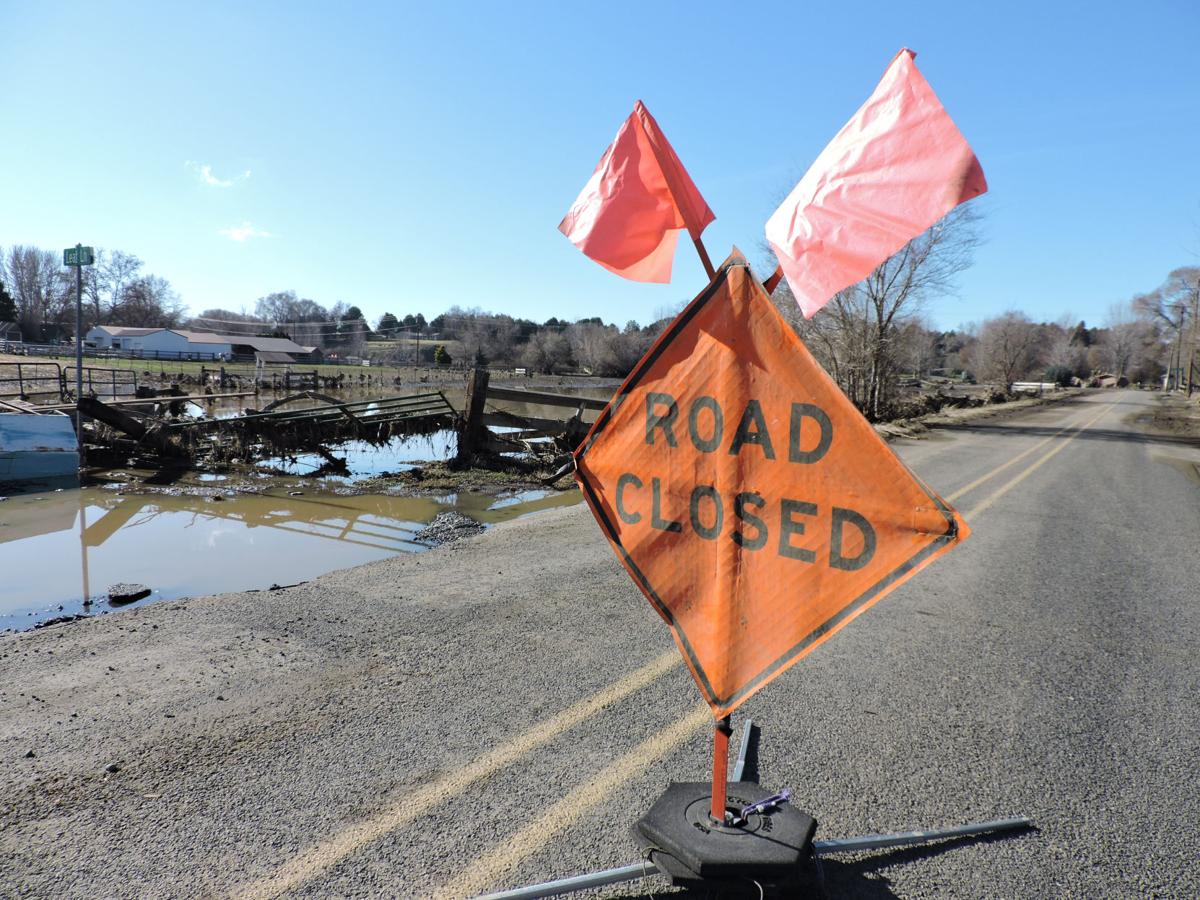 A sign marks the closure of Orchard Avenue in Hermiston, where farther down a section of road washed away. 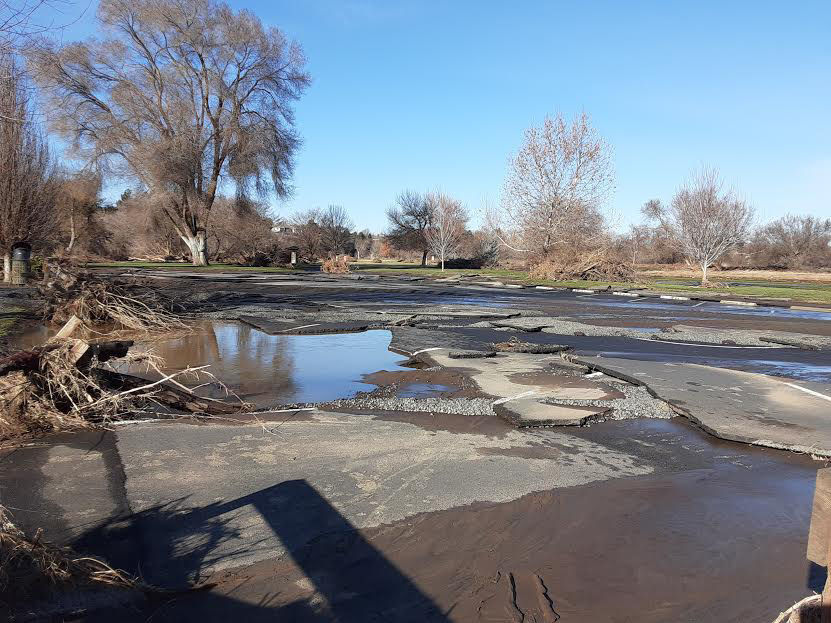 Flood waters tore large chunks of asphalt out of the Riverfront Park parking lot in Hermiston. 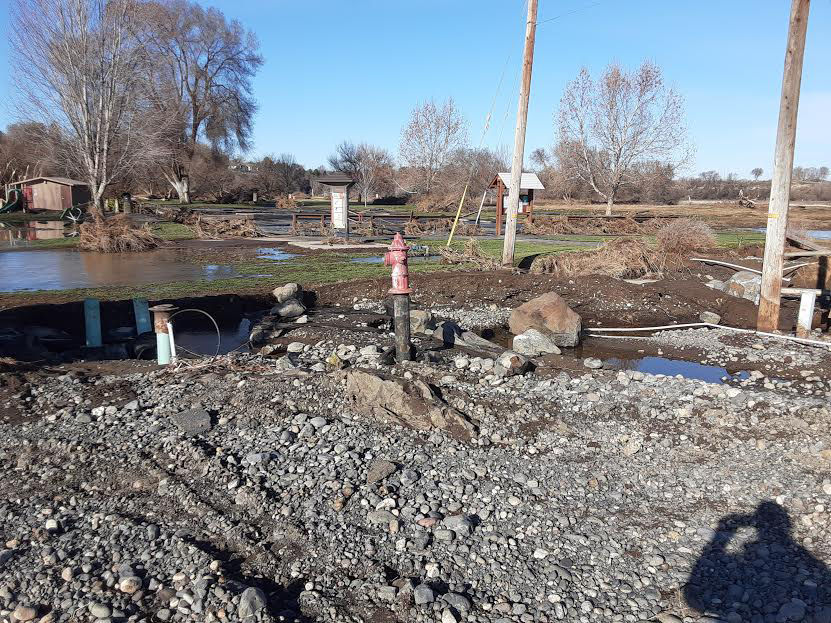 A fire hydrant sticking into the air shows how much soil was washed away during a flood at Riverfront Park in Hermiston. 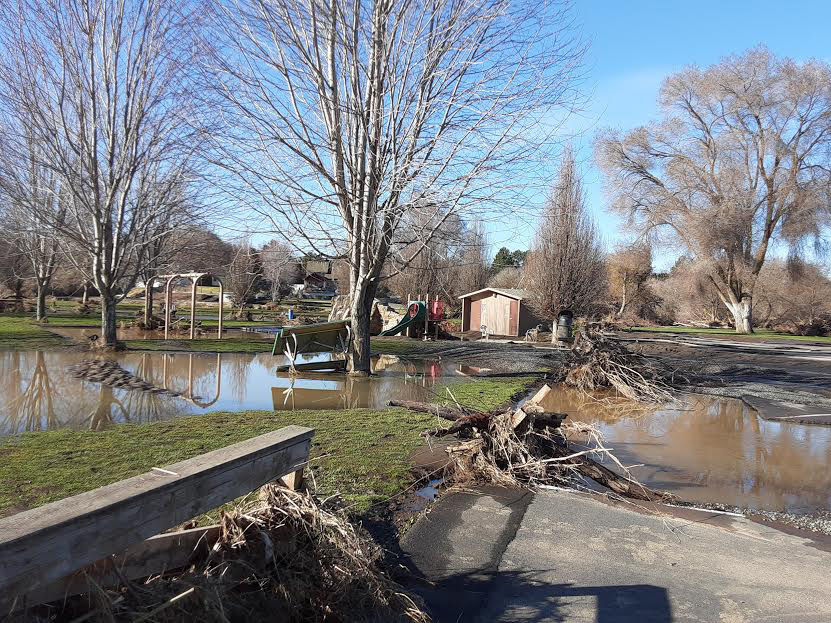 Debris litter Riverfront Park and large sections of asphalt are missing from the parking lot after the park flooded Friday. 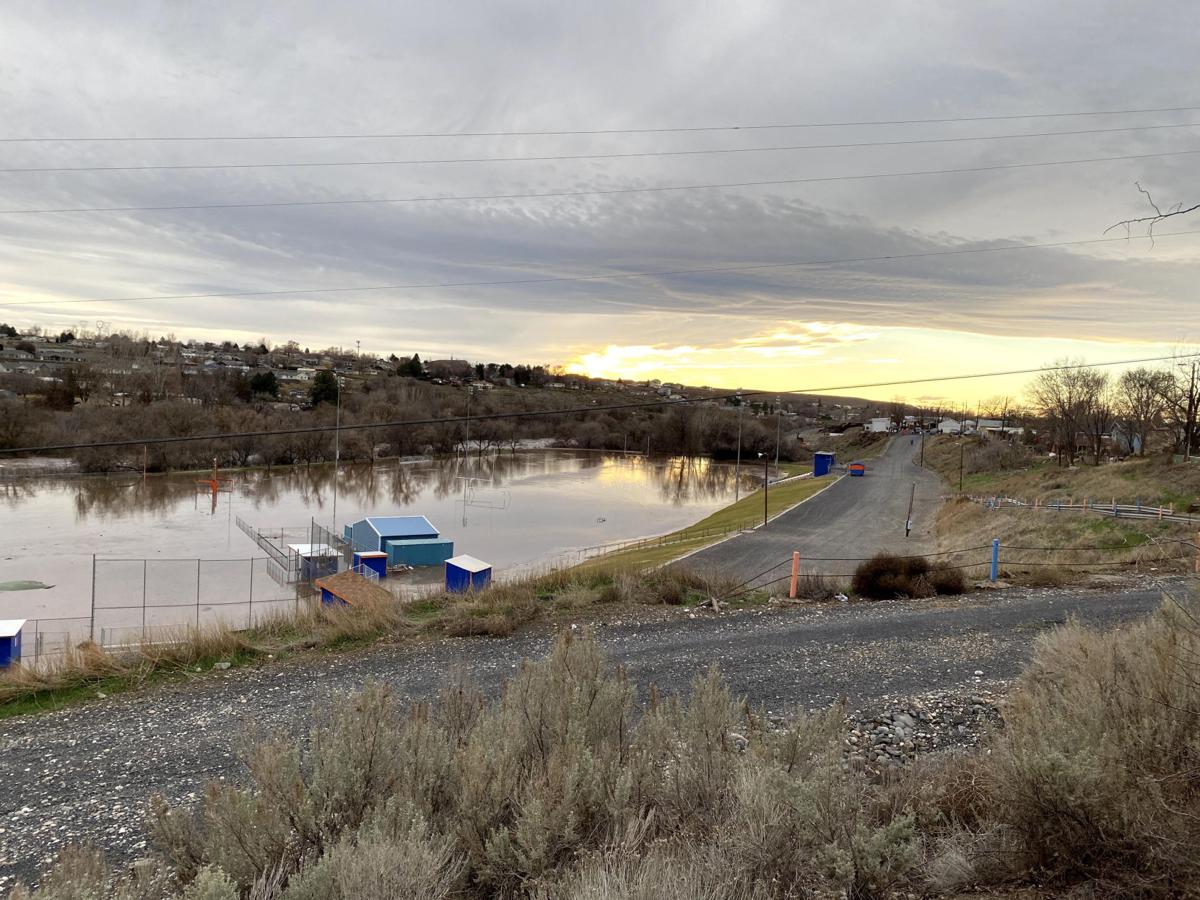 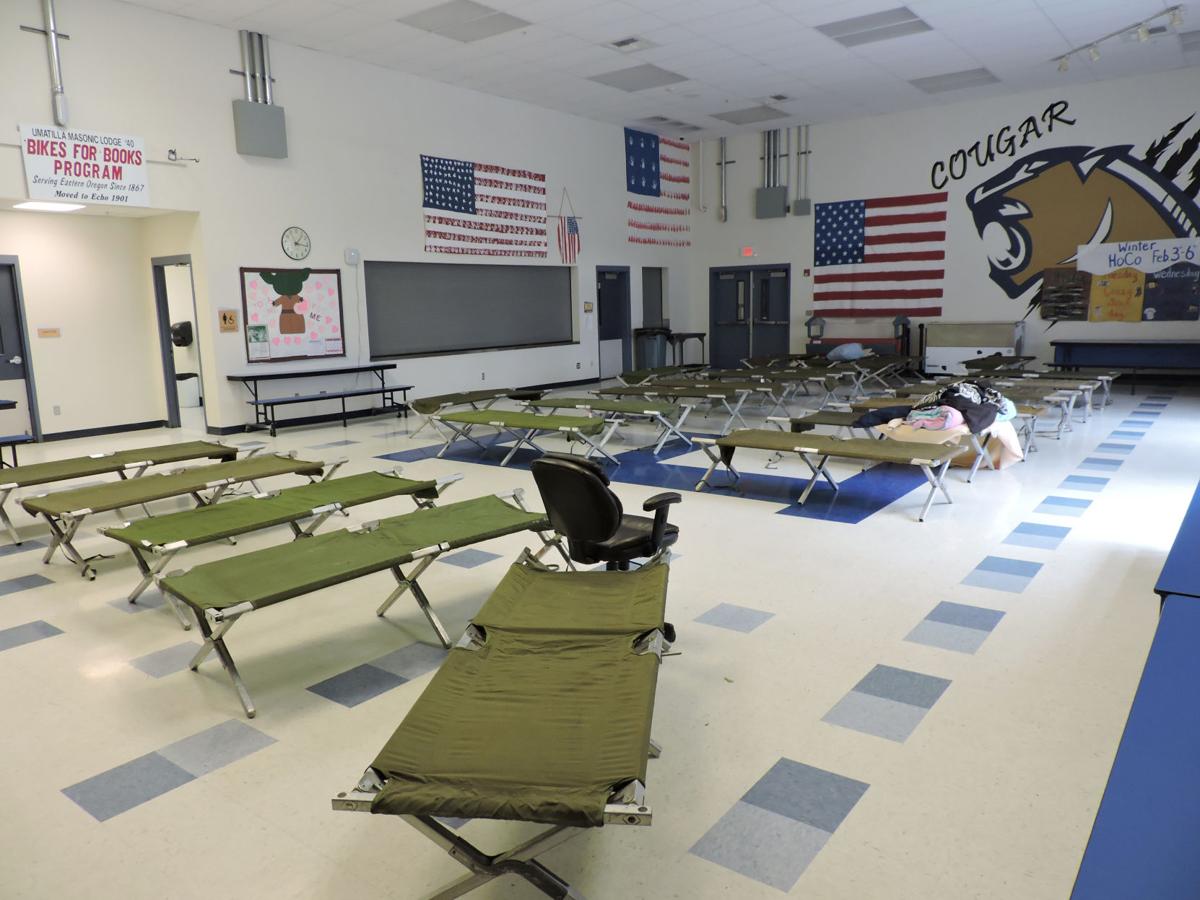 Cots sit empty at Echo School on Saturday afternoon, after the school welcomed displaced residents the night before.

A sign marks the closure of Orchard Avenue in Hermiston, where farther down a section of road washed away.

Flood waters tore large chunks of asphalt out of the Riverfront Park parking lot in Hermiston.

A fire hydrant sticking into the air shows how much soil was washed away during a flood at Riverfront Park in Hermiston.

Debris litter Riverfront Park and large sections of asphalt are missing from the parking lot after the park flooded Friday.

Cots sit empty at Echo School on Saturday afternoon, after the school welcomed displaced residents the night before.

While much of the flood water has left Echo, Stanfield, Hermiston and Umatilla, the damage it left behind will take longer to clear away.

In Hermiston, Orchard Avenue remained closed near Riverfront Park on Monday after floodwaters washed away a small section of the paved road. The park was also severely damaged, in what parks and recreation director Larry Fetter said was by far the worst flooding event the park had seen.

"The parking lot has been broken up into chunks and distributed all over," he said. "There really is no parking lot. The driveway is gone, fencing is gone, the restroom appears to be off its base, portions of the trail are gone .... Our irrigation system is completely compromised."

For now, however, the park remains closed and Fetter said it was far too early to have a timeline for reopening or an estimate of the damage costs. He said people walking or driving in the damaged area were making the damage worse — not to mention putting themselves in danger — and asked that everyone steer clear.

Fetter said if it were possible, he would like to consider moving the restroom, parking lot or other more expensive improvements to the south side of the park, which avoided the bulk of the rushing water.

"It's pretty obvious now where the water wants to go when it jumps the banks," he said.

Brian Mack, an area resident, said he knew homeless families that had been camping along the Umatilla River near Hermiston, mostly in the Oxbow area, who had been displaced by the flood. He said many of them lost tents and other belongings.

"I know six or seven families that had to grab their families and get out," he said. "It just sucks because they lost everything."

Mack said he hoped in the event of future flooding in the area, emergency responders would make an attempt to alert anyone in makeshift camps along the river and in the wooded Oxbow property that floods when the river overflows.

Volunteers spent the weekend providing food and shelter to community members displaced by floodwaters from the Umatilla River.

As many as 50 homes in Echo were directly affected by flooding late Thursday and early Friday across the Echo Rural Fire Protection District area, according to the district. However, people at Echo Community Church remained optimistic.

The church opened Friday to provide meals to displaced people and emergency crews working to alleviate damage in the area, and continued to feed anyone in need throughout the weekend and Monday.

“We’ll be open as long as we need,” Marcum said.

The church also has bottled water and some toiletries available for those in need.

Marcum and his wife fled their own home on the west side of Echo early Friday morning, and when they returned later they found waters rising at least 3 feet. They will likely lose some of their belongings, Marcum said, but the house should be OK, noting that others were probably not so lucky.

One person sought shelter at Echo High School, where cots were set up in the commons area, and others who were displaced likely headed to the Pendleton Convention Center or to stay with family outside of the flooded areas.

“Some houses will be inhabitable,” Marcum said. “The flooding was much worse this year than in a long time.”

The city of Echo was urging anyone in the Echo area with flood damage to stop by city hall as soon as possible or call 541-376-8411 to report the damage before the city's meeting with disaster relief agencies on Wednesday.

In Stanfield, some businesses and homes near the Stanfield Meadows Road area were in need of cleanup after floodwaters receded.

“It got really hectic as soon as the interstate closed down,” he said.

Interstate 84 remained closed between mileposts 182 and 188 on Saturday, routing all interstate traffic on a detour through Hermiston and Stanfield. The Oregon Department of Transportation reopened one westbound lane and one eastbound lane on Saturday evening at 45 mile per hour speeds, but said Monday they did not have an estimated timeline for a full reopen.

The city of Stanfield asked residents affected by the flood to pick up a disaster relief packet at city hall to document the damage before cleaning or repairing anything. Volunteer cleanup opportunities will be announced later.

Floodwater seeped into the Stanfield Moose Lodge, but the lodge posted photos to their Facebook page on Sunday showing volunteers cleaning mud out of the kitchen, allowing the lodge to reopen Monday.

In Umatilla, the baseball field, fieldhouse, track and other elements of the athletic complex behind Umatilla High School were under water Friday after the berm protecting them from the Umatilla River failed in multiple places.

Superintendent Heidi Sipe said Monday the mud was still too thick to properly assess the damage, but she should know more later in the week. The school leases the property from the Army Corps of Engineers, and Sipe said she was working with both the Corps and the school's insurance company.

"As soon as we get the all clear to start removing debris, we will have a work party and we will invite the community," she said.

Sipe said it was unclear yet how quickly all of the elements of the complex would be useable again, but spring sports could start early practices indoors if need be, and she had confidence they could work with neighboring communities to find other options for practices as well.

"I know Eastern Oregon is amazing about banding together in situations like that," she said.

The Umatilla City Council had an emergency meeting Saturday night to declare a state of emergency.