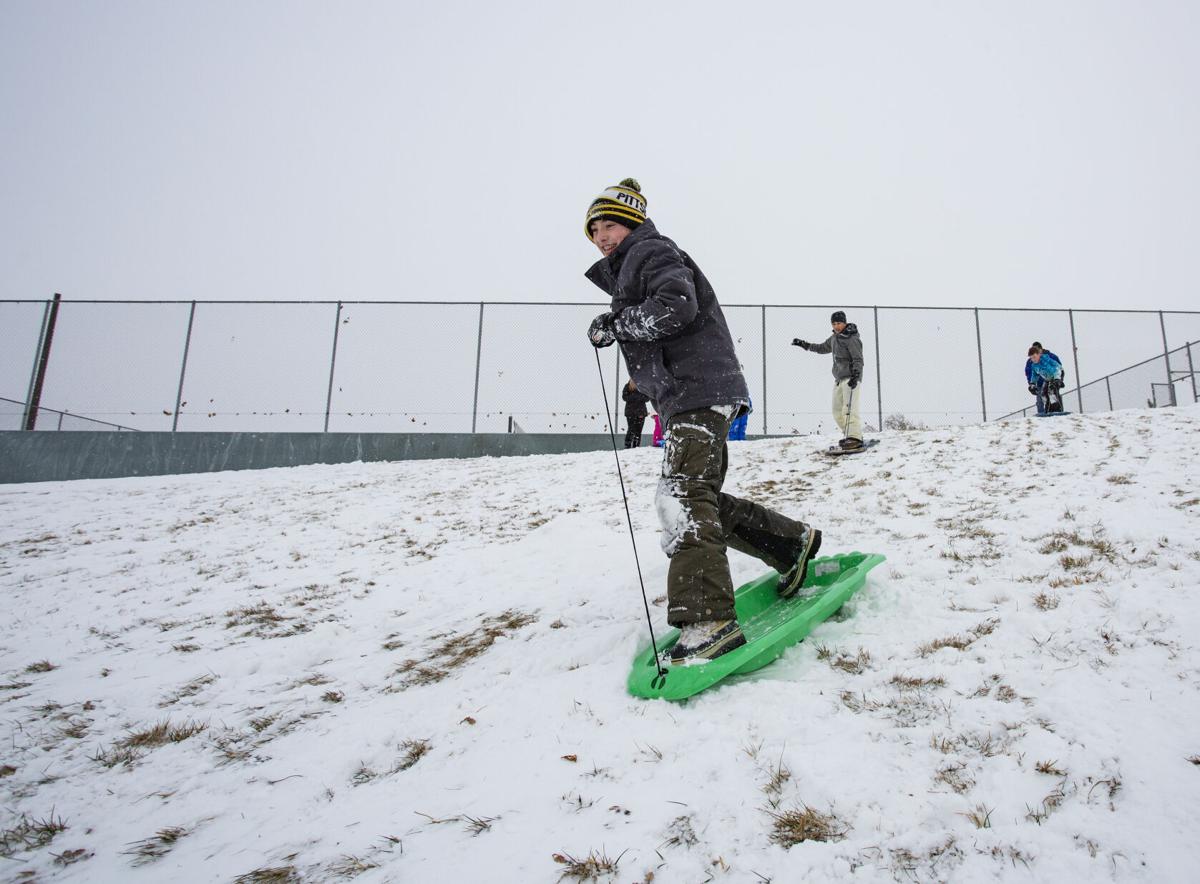 Gage McElroy stands on a sled while playing in the snow on a hill behind Sunset Elementary School in Hermiston on Friday, Feb. 12, 2021. 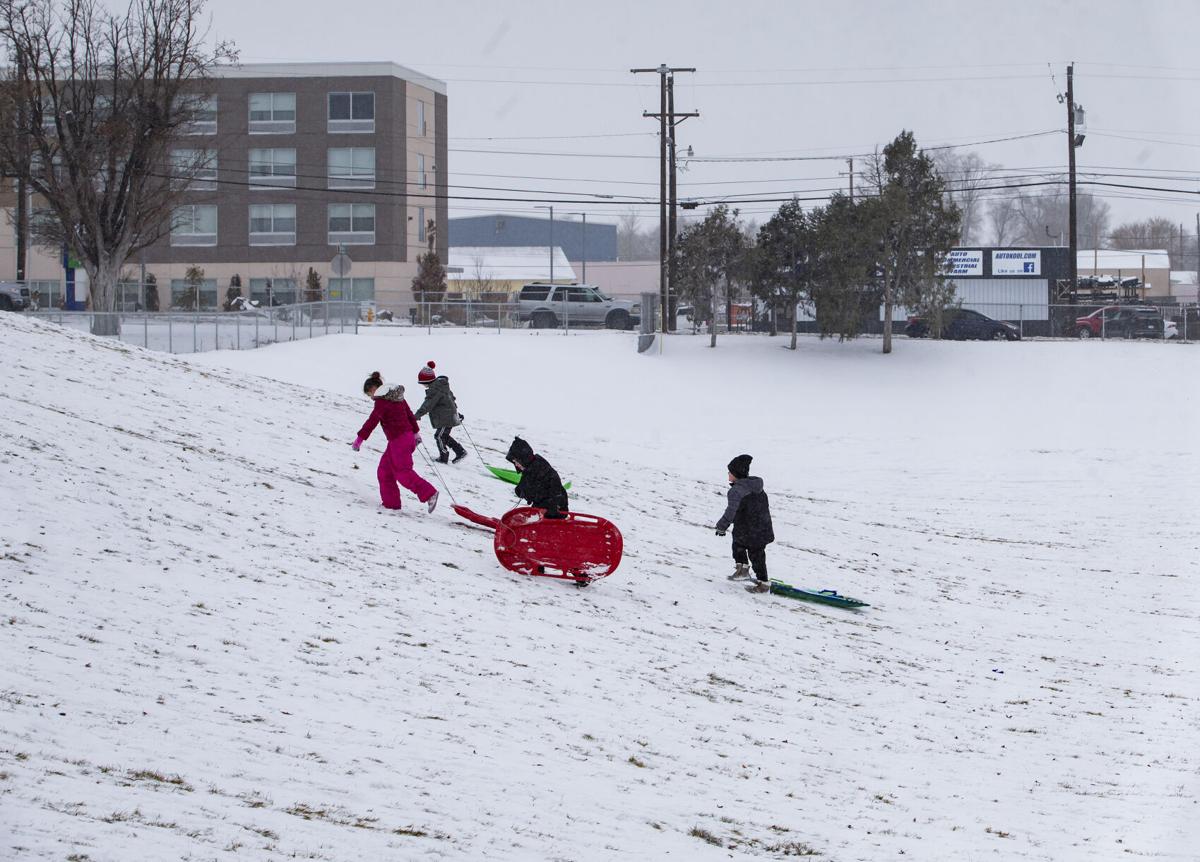 Children sled at a hill behind Sunset Elementary School in Hermiston on Friday, Feb. 12, 2021. 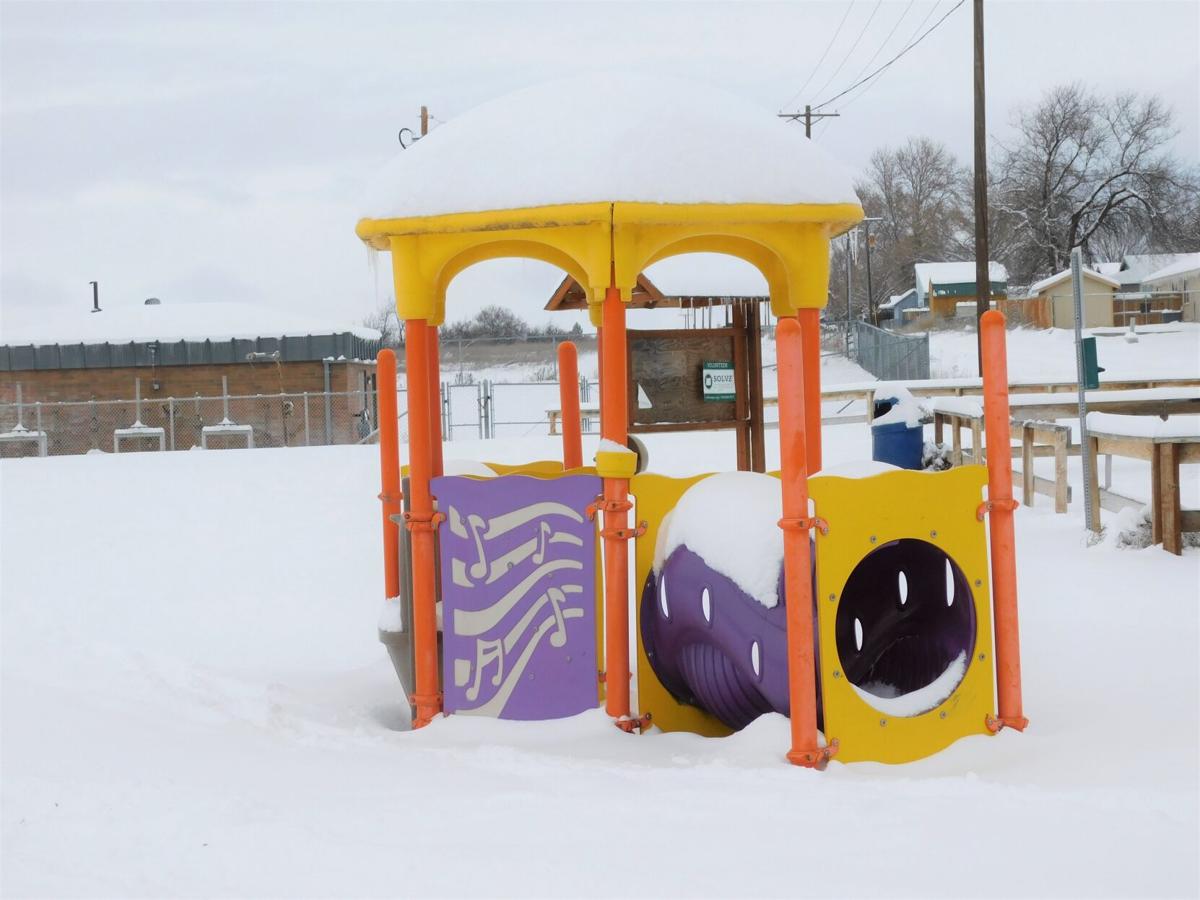 A piece of playground equipment sits covered with snow at Harrison Park in Hermiston on Saturday, Feb. 13, 2021.

Gage McElroy stands on a sled while playing in the snow on a hill behind Sunset Elementary School in Hermiston on Friday, Feb. 12, 2021.

Children sled at a hill behind Sunset Elementary School in Hermiston on Friday, Feb. 12, 2021.

A piece of playground equipment sits covered with snow at Harrison Park in Hermiston on Saturday, Feb. 13, 2021.

More than a foot of snow blanketed Hermiston over the weekend, but local meteorologists as of Monday, Feb. 15, didn’t expect the aftermath to create the kind of conditions that led to the Umatilla County floods in February 2020.

Rob Brooks, a meteorologist with the National Weather Service’s Office in Pendleton, said three successive systems, starting on Thursday, Feb. 11, and running through the morning of Feb. 15, combined to pelt the region with massive snowfall amounts.

Brooks said reports coming from other parts of Umatilla County, including Hermiston, show most other areas also saw well over 12 inches of snow by early Feb. 15. Temperatures also reached into the single digits at times.

Although precipitation is expected to continue throughout the region, significant snowfall is not.

With temperatures expected to exceed freezing during daytime hours, Brooks said residents should expect a “wintry mix” of rain, freezing rain and snow over the next week.

And while warmer temperatures combined with rain in the Blue Mountains led to floods across the county in 2020, Brooks said the changing weather shouldn’t create flood conditions because the mountains are expected to retain their snow.

“We might see some parking lot stuff and some drainage stuff, but not any (floods),” he said.

On Tuesday, Feb. 16, the station stuck by that estimation in an update on Facebook, predicting the runoff may create some minor “ponding” in fields and where debris blocked drainage pipes, but not a significant overflow of the Umatilla River.

“We are heavily monitoring and staying active with the weather, to stay on top of concerns,” the post stated. “Currently it looks like a gradual melt, as precipitation amounts and temperature rises are gradual through the weekend.”

In Hermiston, the snowfall over Presidents Day weekend created recreational opportunities for children and teens, who took to Hermiston’s few hills with sleds and inner tubes.

On Saturday afternoon, Feb. 13, when the snow was deep and there was no school, youths and their parents lined the top of the hill leading down onto the fields of Sunset Elementary School, while the parking lot at Butte Park was full with vehicles of families sliding down the hill sloping down from the butte.

For others, the snow was a work opportunity, with several locals advertising their impromptu snow removal services for pay on community Facebook pages. Others publicly thanked people who had helped clear their driveway of snow or pushed their vehicle out when it got stuck somewhere.

The city of Hermiston uses a three-tiered system of snow removal on its streets. Phase 1 includes clearing main traffic routes, Phase 2 is hills and the downtown commercial area, and Phase 3 is residential neighborhoods. If new snow falls while plows are in the second or third phase, crews will return to Phase 1. Public works employees may also be pulled away from plowing to deal with other emergencies in their department, such as broken water mains.

The city asks residents to help by shoveling the snow off their sidewalks and driveways into their yards instead of the street.

“Remember to slow down and drive carefully when winter weather starts sticking to roadways,” the city’s statement on its plow system warned.

On Saturday, Feb. 13, all available Oregon Department of Transportation crews were out plowing, deicing and applying sand to slippery roads in Eastern Oregon, according to an ODOT spokesperson.

“Right now, all hands are on deck,” Tom Strandberg said on the morning of Feb. 13.

He said conditions seemed more severe in Umatilla County than in other parts of Region 5. ODOT encourages residents to stay home while crews are clearing the roads after snow falls.

“Staying off the roads will help city, county and state maintenance forces clear snow more quickly and efficiently,” a press release from ODOT said. “Be patient, stay safe and watch out for winter crews and each other.”

If travel is unavoidable, Strandberg said people should take precautionary measures in case they get stuck, like carrying extra gas, a charged cellphone, blankets, food and water.