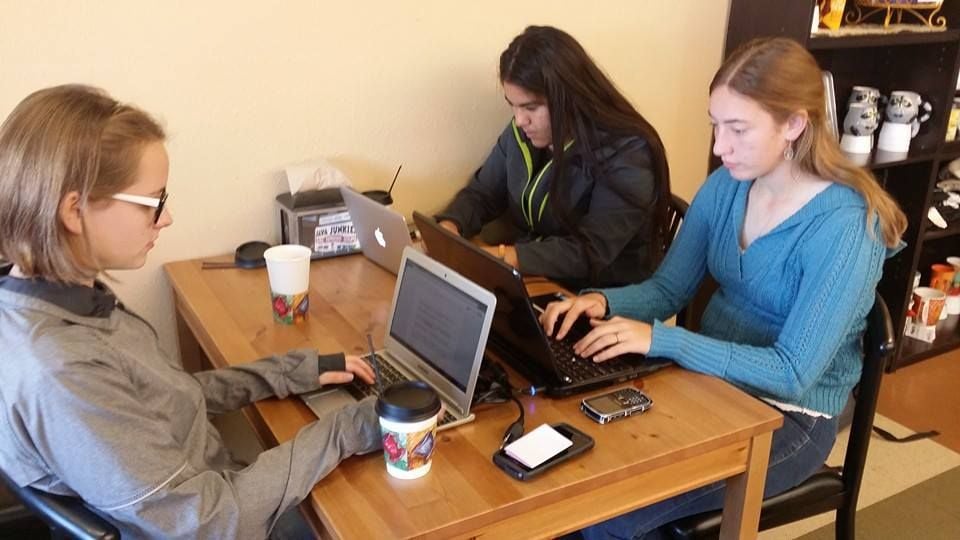 From left, Cameron Sipe, Anabel Moreno and Megan Lorence work on their presentation they will give at an Oregon Department of Education conference about their robotics after-school program, which has also received national recognition. 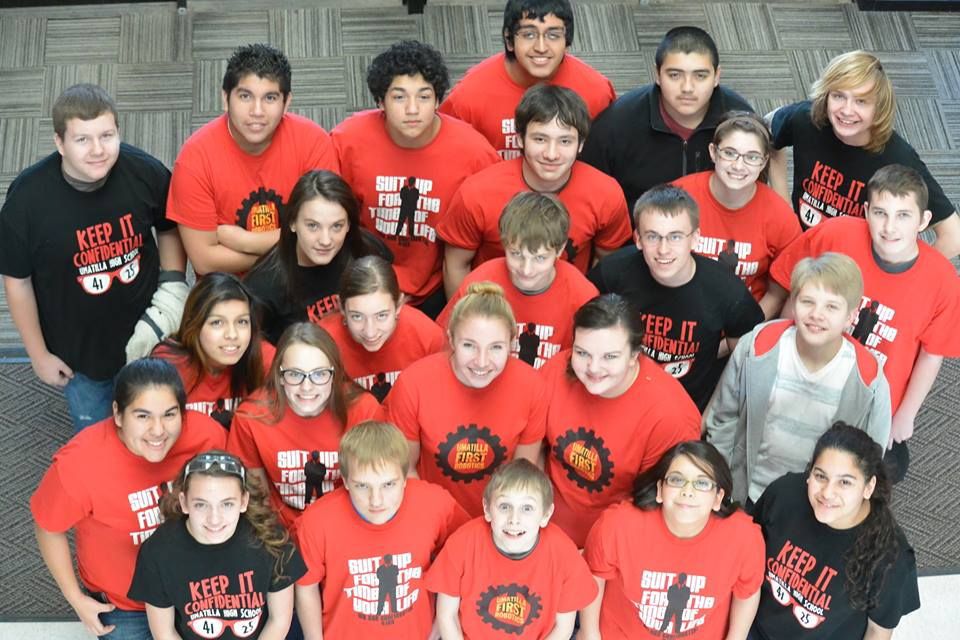 Umatilla High School robotics team members pose for a photo earlier this year. Several members of the team will attend an Oregon Department of Education conference this week and give a presentation on their robotics program.

From left, Cameron Sipe, Anabel Moreno and Megan Lorence work on their presentation they will give at an Oregon Department of Education conference about their robotics after-school program, which has also received national recognition.

Umatilla High School robotics team members pose for a photo earlier this year. Several members of the team will attend an Oregon Department of Education conference this week and give a presentation on their robotics program.

The Umatilla School District after-school program, better known as STEM Academy, is receiving national recognition this month as the National League of Cities features it among only three selected programs from across the country at its national exposition.

Umatilla Superintendent Heidi Sipe said the league did a study the last couple of years about different after-school programs throughout the country. For the study, community officials completed a survey about their various programs. The organization then interviewed representatives from those agencies, and three were chosen to be model programs to be featured at the national exposition.

“After the initial survey, they phoned me two summers ago to visit about our program,” Sipe said. “Something from that information interested them, and they then asked me to provide a lot more follow up and data. They found that there are a lot of really unique components to our program.”

Sipe said district officials learned this fall that Umatilla was one of the three schools selected as a model program, and they will speak about the program at the Congress of Cities Exposition Friday.

Sipe said the after-school program was started in 2003 as a way to provide more opportunities for students to explore future career possibilities. The program started with various STEM-related programs at McNary Heights Elementary School and has been funded largely year to year through grants.

Last year, however, the district was awarded a $2 million 21st Century Community Learning Center grant, which allowed Umatilla to expand the program to the middle school and high school and increase the number of classes offered to students at all grade levels. Now, the program features classes on all sorts of subjects in science, technology engineering, mathematics. Some of these classes include robotics, science of flight, crocheting and video production. The robotics program now has 37 teams across the grade levels.

“Robotics is certainly the backbone of our after-school program and our one consistent thread all the way through,” Sipe said. “It is really neat to see how we were able to expand it from robotics.”

Sipe said she never imagined that the district’s program would receive so much recognition.

“The idea that Umatilla is on the map for something like this honestly blows my mind,” she said. “All we have been trying to do is do good work for kids. We never considered that it would be so unique.”

She said the after-school program, however, wouldn’t be possible without the support and hard work of Umatilla’s students and their families.

“Any credit that we get for recognition for this program is really due to our families and our kids,” she said. “Without our families’ willingness to allow their kids to participate in the after-school program, and without the hard work of the students, none of this would have been possible. It is pretty intense to spend another two hours after school doing more school-related activities.”

During her presentation at the exposition, which will take place in Austin, Texas, Sipe said she will be speaking on how to organically grow an after-school program in response to community needs.

“The way to break the cycle of poverty is to expose students to new ideas, help them see other college and career options,” she said. “A lot of our kids really didn’t even realize what careers are out there, so they didn’t know how to dream for those types of careers … It has really opened up a lot of doors for a lot of students.”

On the same day, students from the robotics program will also be recognized by the Oregon Department of Education. About 40 students from various grades taking robotics courses in the after-school program will attend a conference on the 21st Century Community Learning Center program and present on what they are doing to further their own opportunities through robotics.

“Kids from first grade all the way to seniors will be teaching adults how to do robotics,” Sipe said. “Our kids are presenting all on their own.”

After the conference, the students will tour the University of Oregon and then head to McMinnville, where they will get to sleep underneath the Spruce Goose airplane at the Evergreen Aviation and Space Museum.

“It is a pretty big day for after school (programs) next Friday,” Sipe said with a laugh.