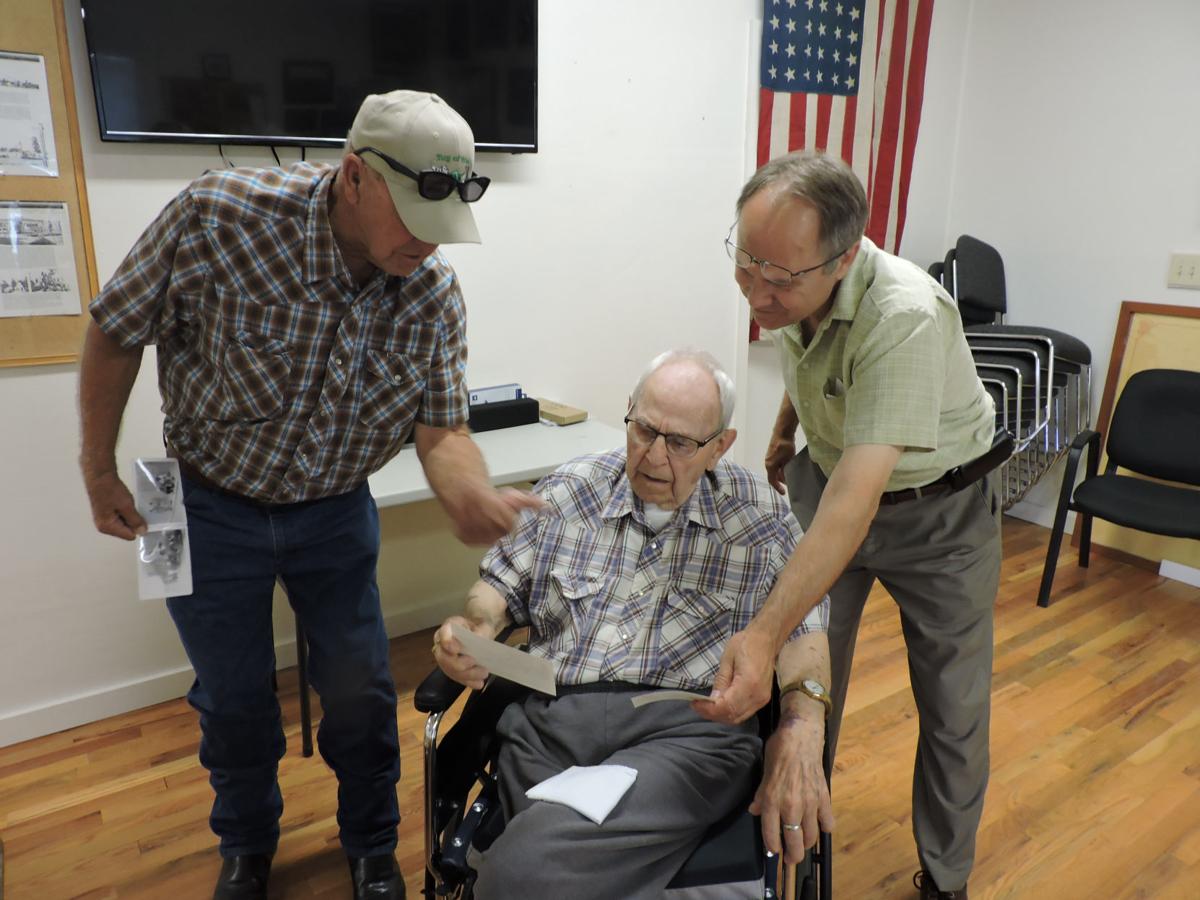 Sam Noble, left, and Terrence Hiatt, right, share some pictures of the McNary Dam construction with Alan Hiatt. Alan stopped by the Umatilla Museum to record some of his memories of his childhood in Umatilla. 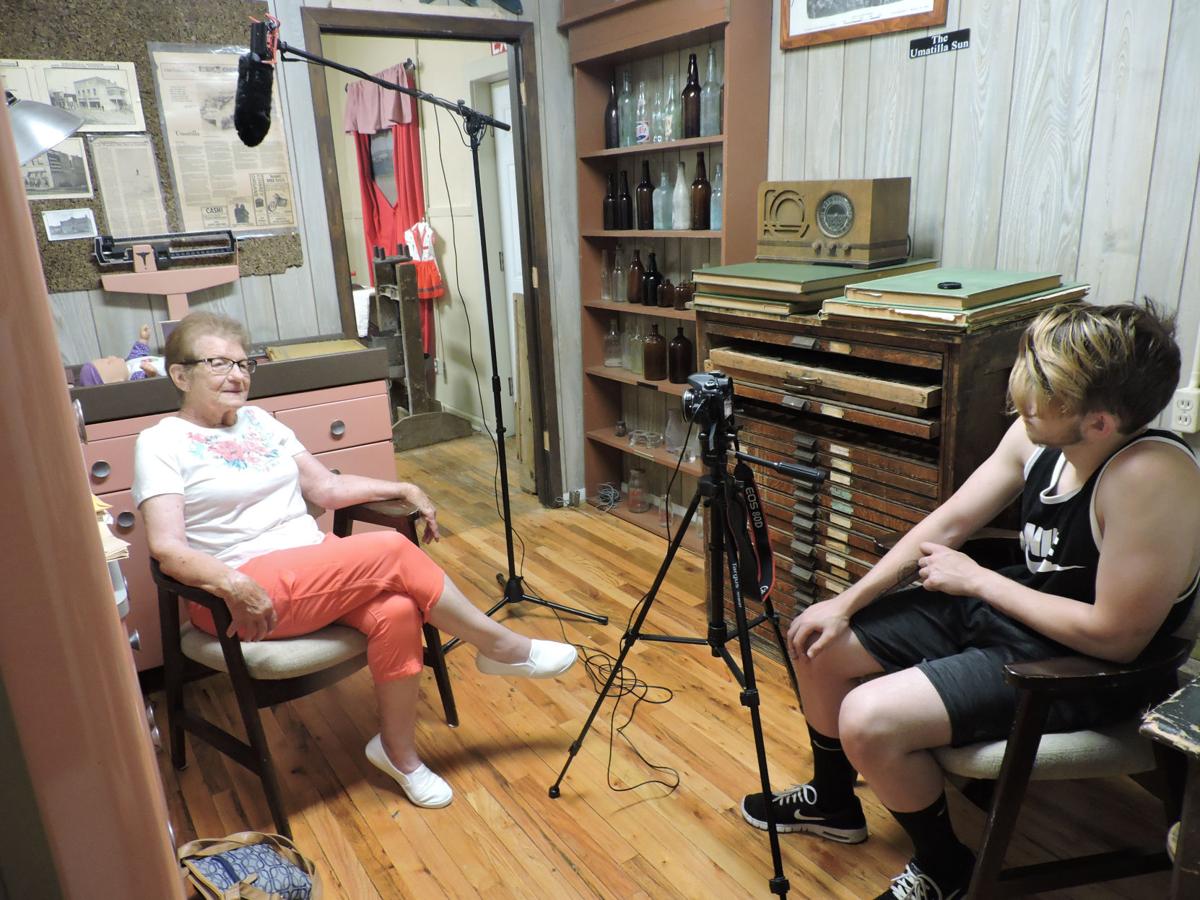 Rita Creamer, left, talks to Nikolas Schuening about her memories of growing up in Umatilla. Creamer was one of several people being interviewed for a project by the Umatilla Museum.

Sam Noble, left, and Terrence Hiatt, right, share some pictures of the McNary Dam construction with Alan Hiatt. Alan stopped by the Umatilla Museum to record some of his memories of his childhood in Umatilla.

Rita Creamer, left, talks to Nikolas Schuening about her memories of growing up in Umatilla. Creamer was one of several people being interviewed for a project by the Umatilla Museum.

Long after memories fade, there will be a record of Umatilla’s formative years — thanks to efforts of a group of history buffs.

The Umatilla Museum is in the process of interviewing longtime residents of the town, focusing on people who grew up there during the 1940s and 1950s. They are filming interviews and plan to compile them onto a disc that people can reference to learn about the town’s history.

The city was established in 1864, but museum members are trying to collect memories of those who were growing up around the time the McNary Dam was built and the town began to take the shape it is today.

Sam Nobles, president of the museum and a longtime resident, graduated from Umatilla High School in 1954.

“There’s a lot of history in Umatilla,” he said, recalling the town’s origins as a trade center and the importance of the railroad. Many of the residents being interviewed worked on McNary Dam as it was being constructed from 1947 to 1954, or remember a flood that devastated the town in 1948.

Previously, most of the town was built closer to the river, which is now referred to as “old town.” It was moved to higher ground in 1968 due to projected flooding from the building of the John Day Dam.

Museum members hope to collect the memories of older residents, but don’t have a specific set of questions.

“We get them started, and then just let them talk,” said Leslie Smith, vice president of the Umatilla Museum. “It’s not really an interview so much as recalling and documenting those memories.”

The project has become something of a bridge between older and younger generations. Nikolas Schuening, who graduated from Umatilla High School a few years ago, is filming and editing the interviews for the museum. He volunteered to film interviews after coming to the museum to help a few friends film a school project, and museum staff asked him if he’d help with their project.

Schuening said he has enjoyed listening to the stories of people he films.

“I’ve wanted to do something for Umatilla — the town I was raised in,” he said. “I’m glad I can give back to the community that’s given so much to me, in the way I’m able to.”

He added that even though he’s a native son, there’s much about the town that he’d never heard.

“You don’t always know about your own history,” he said.

So far, museum members have interviewed about 10 people, including two on Tuesday.

Rita Creamer, a lifelong Umatilla resident, sat in front of a camera in the museum’s back room, and reminisced about her youth. In high school, she worked at the local theater.

Some subjects came from out of town. Alan Hiatt, 88, hasn’t lived in Umatilla since 1951, but still fondly remembers growing up there. His sons, Terrence and Don, drove him out from Vancouver, Washington, so he could record his memories.

“My dad’s been wanting to come back,” Terrence said.

Alan Hiatt remembered the barbershop his father owned, and the hotel his mother ran, both in old town Umatilla.

“I was the fire chief for many years,” he said.

He also worked on the dam, building concrete forms. Two of his brothers ran the ferry across the river and one worked as a toll collector when a bridge was built.

The project will be ongoing, Smith said, while they collect more memories from people.

Nobles said he also hopes younger people, such as high school students, will take an interest in the museum. He said he’d like to feature aspects of the current high school, such as the robotics team, in one room.

“We want to note the way the school has progressed, the way the culture has changed,” he said.