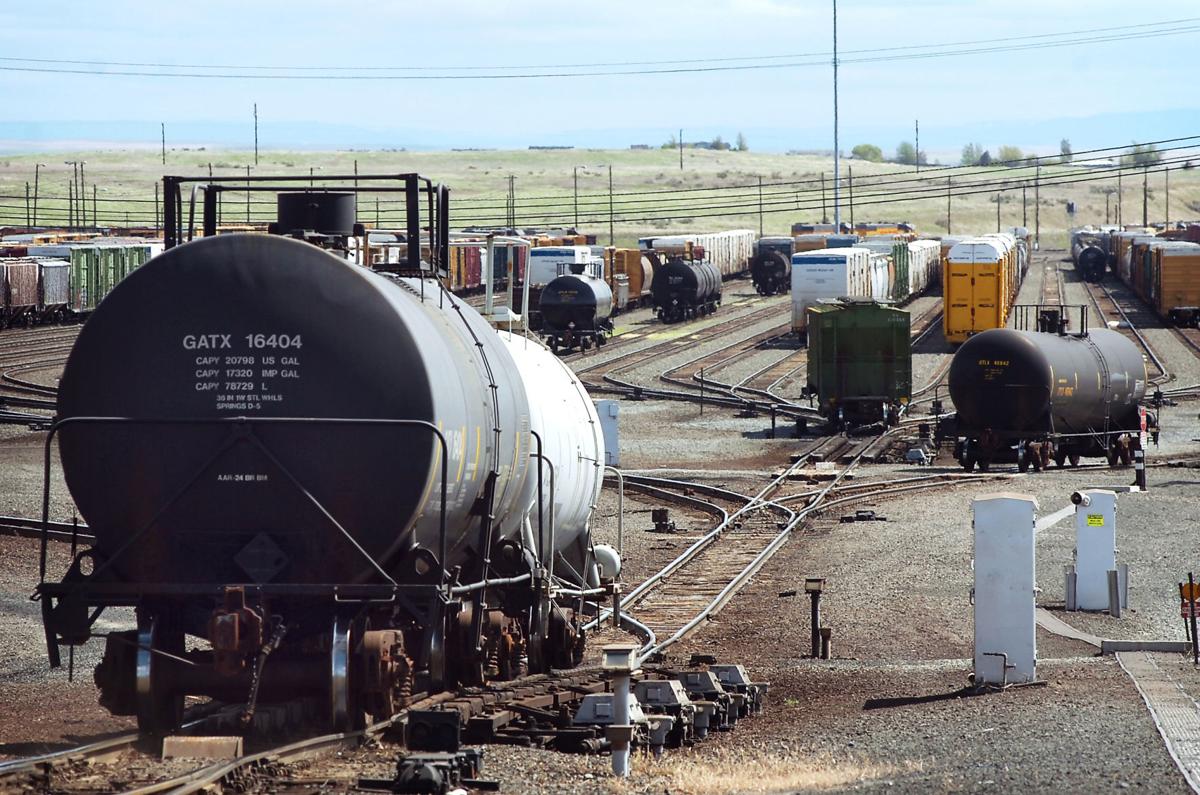 Rail cars roll down the hump and into the yard at the Union Pacific Railroad Hinkle Locomotive Service and Repair Facility and Freight Classification Yard near Stanfield in May 2012. 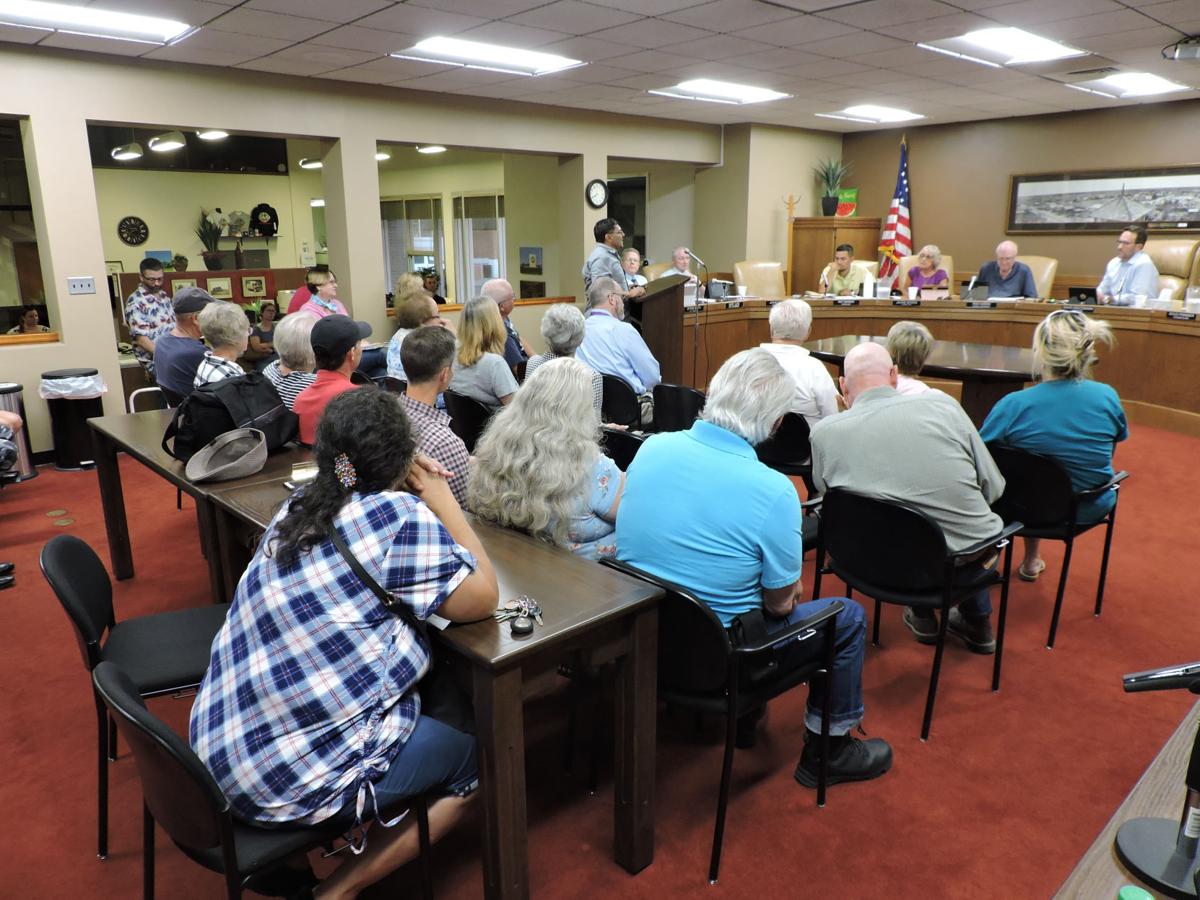 A man speaks to the Hermiston city council Aug. 26 about frustrations with a March water rate increase. The audience for the meeting filled the seats in the council chambers and spilled over into the lobby. 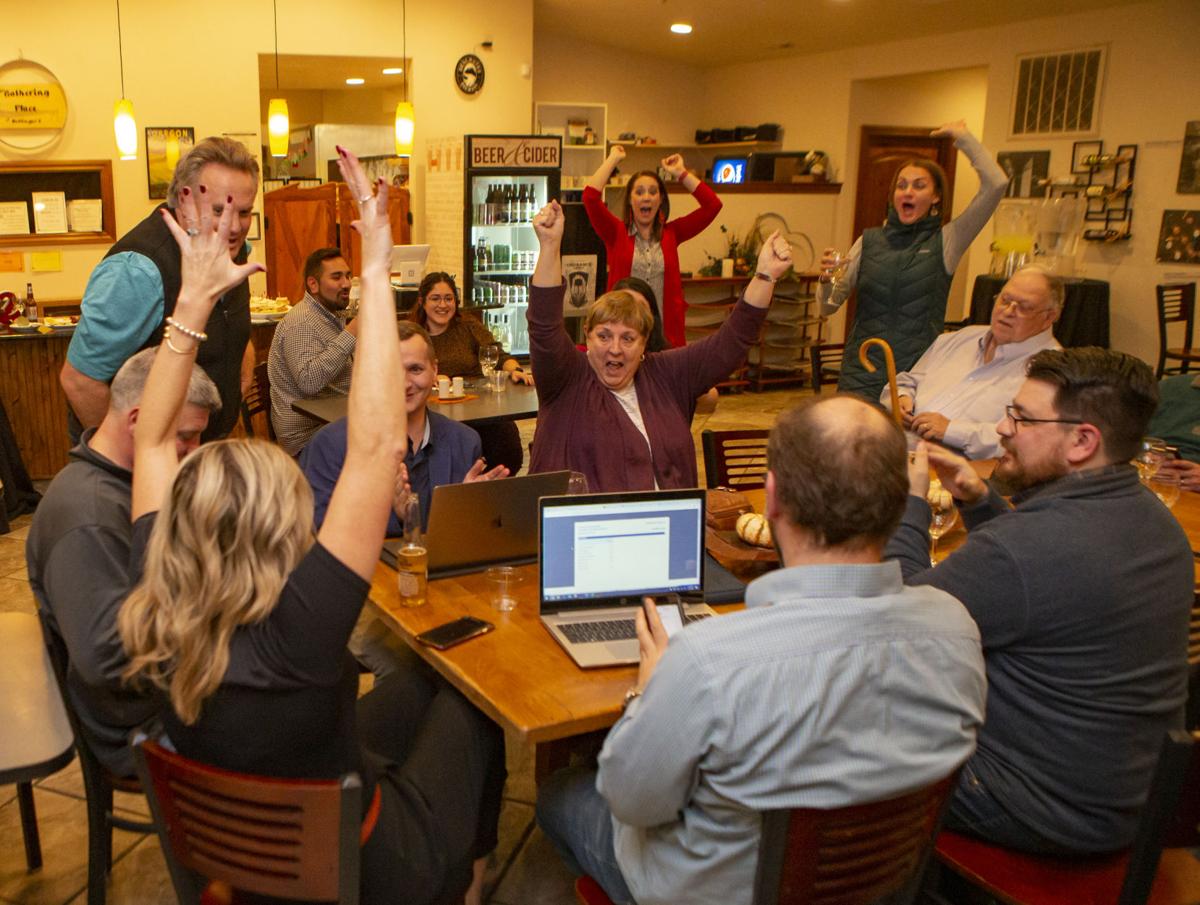 Supporters of the Hermiston School District Bond react to learning of the passing of the bond during an election party in November. 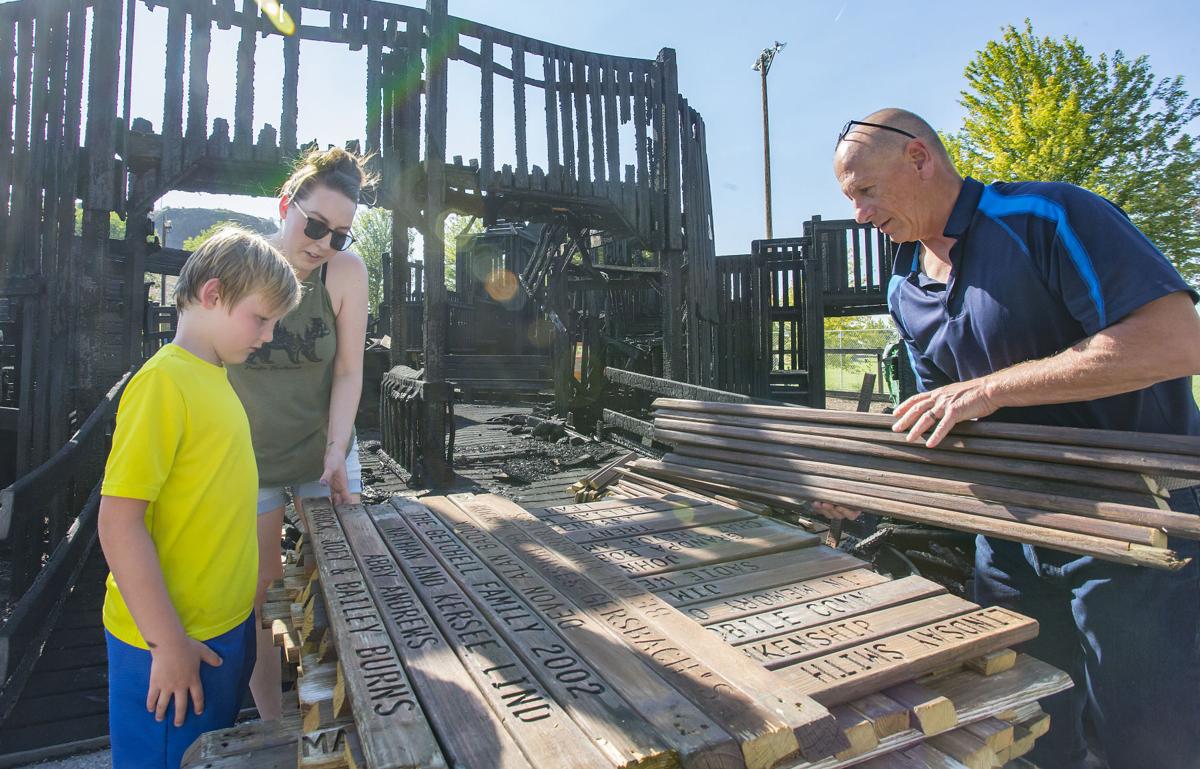 Hermiston Parks and Recreation director Larry Fetter (right) assists Kayla Sandlyn and Dylan Duke earlier this year in locating a wooden fence board carved with the name of Dylan’s father Scott Duke, who passed away several years ago. 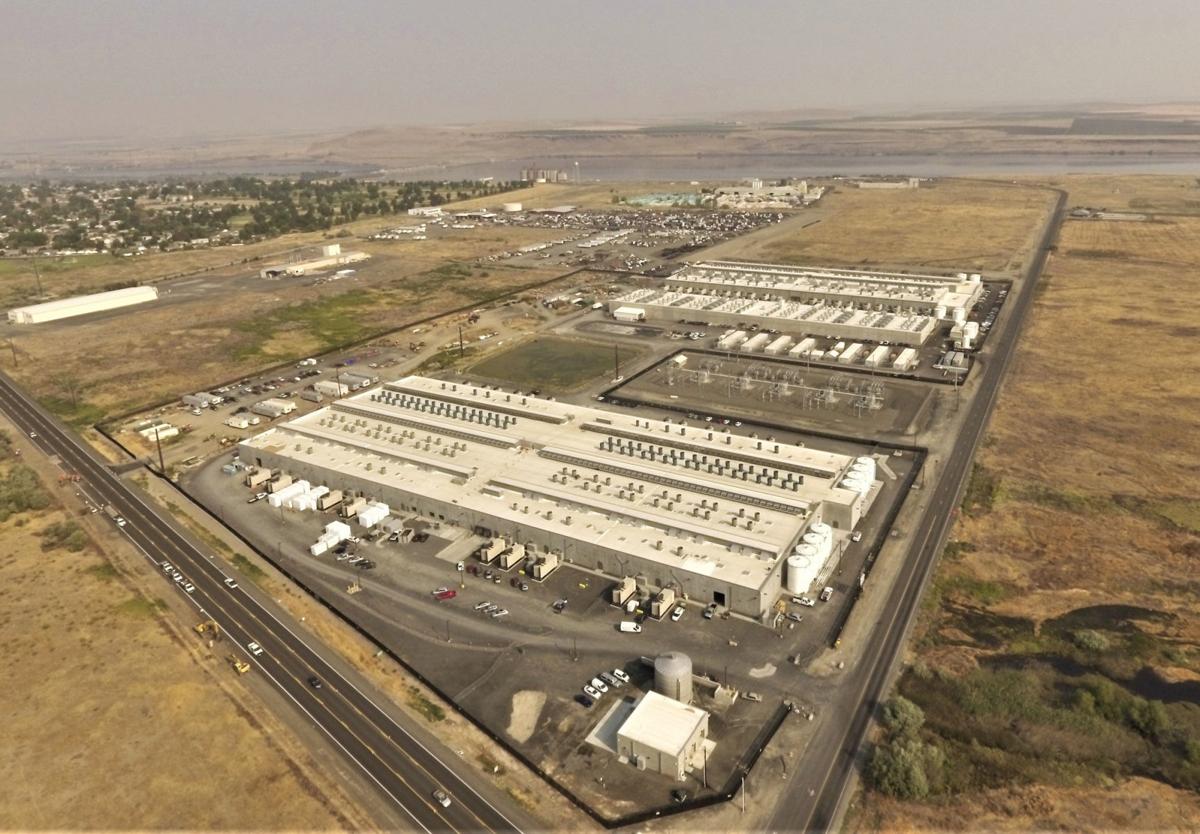 The Amazon data center in Umatilla is one of four sites in Umatilla and Morrow counties that have been completed since 2010, with at least two more on the way. 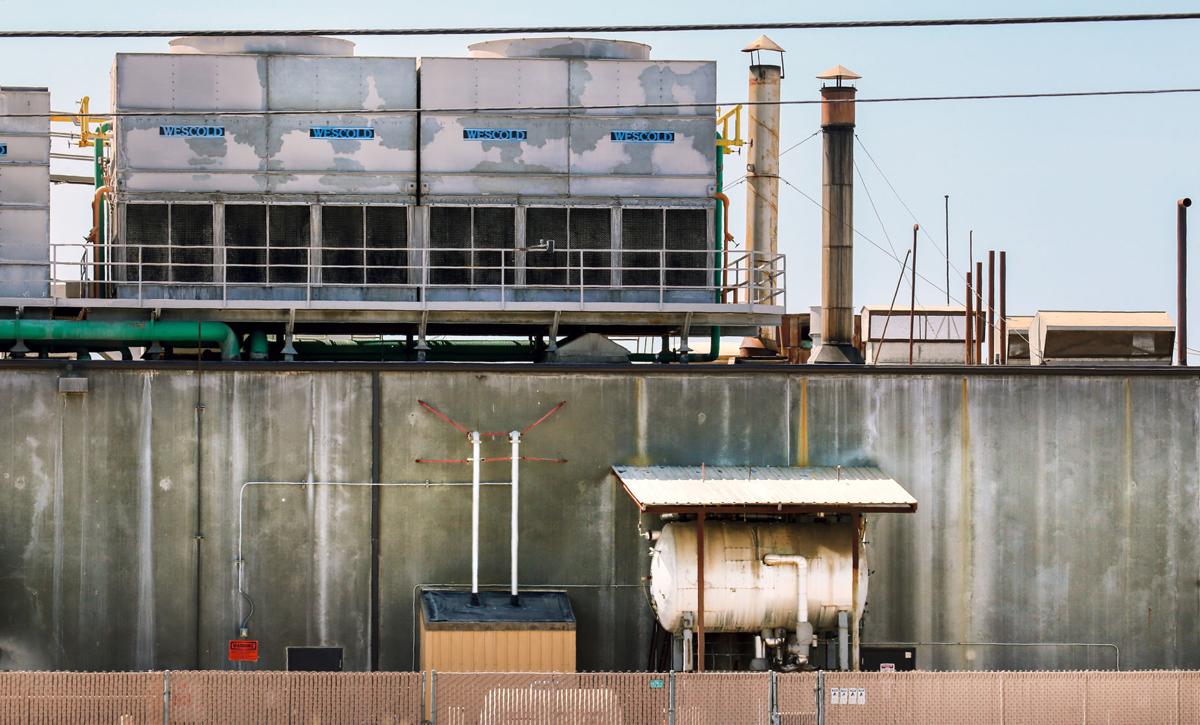 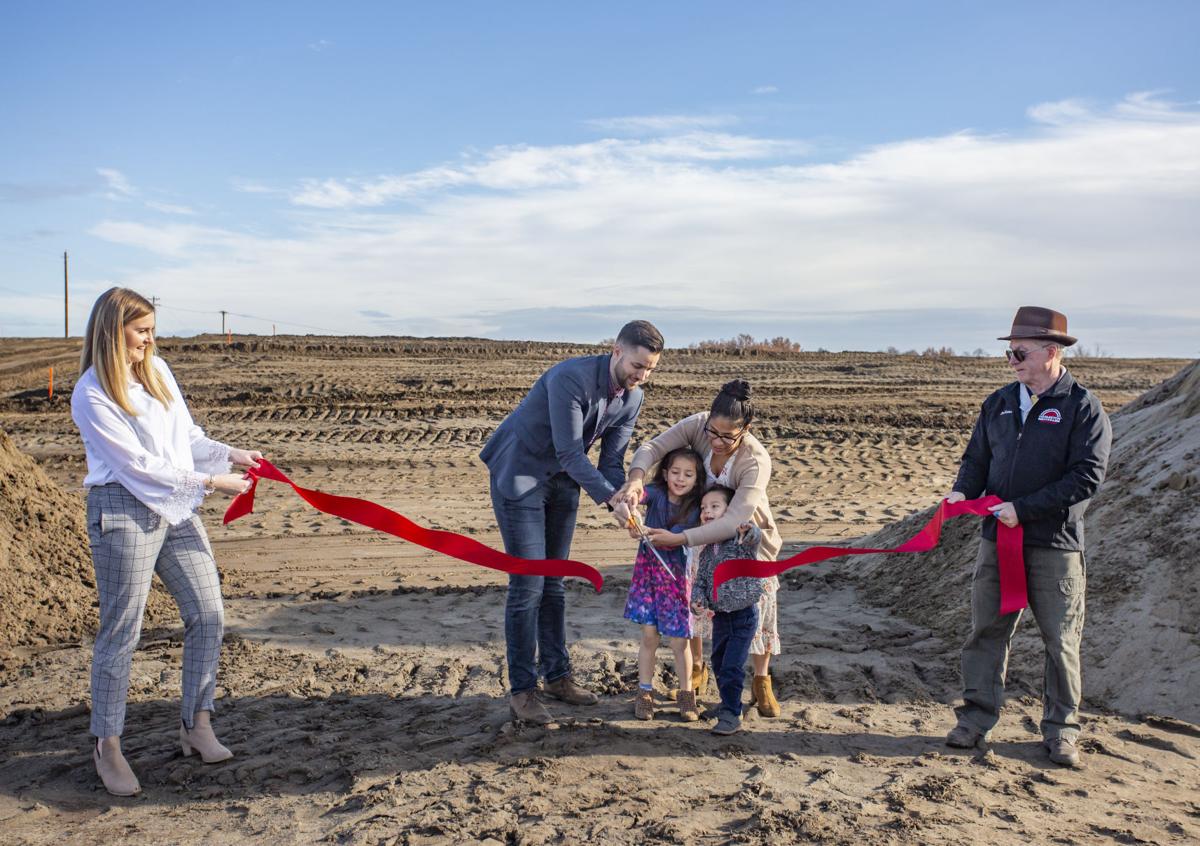 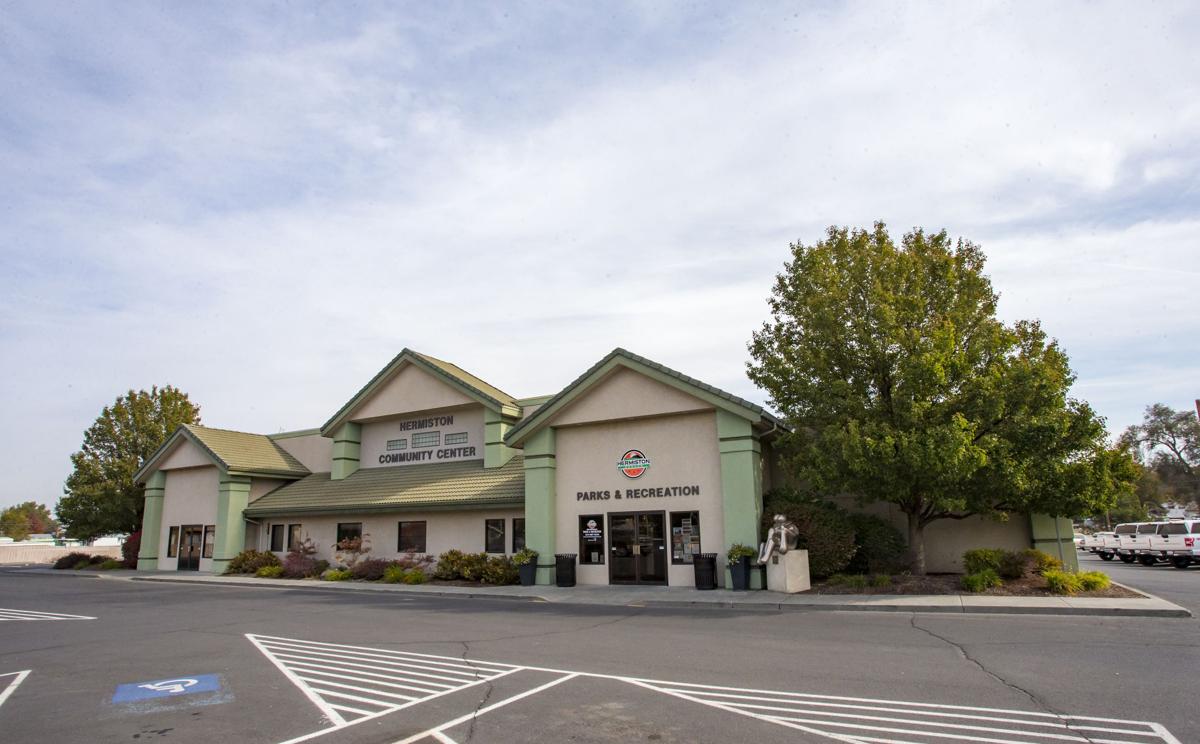 A mystery buyer considered making an offer on the Hermiston Community Center in 2019 but has yet to come forward. 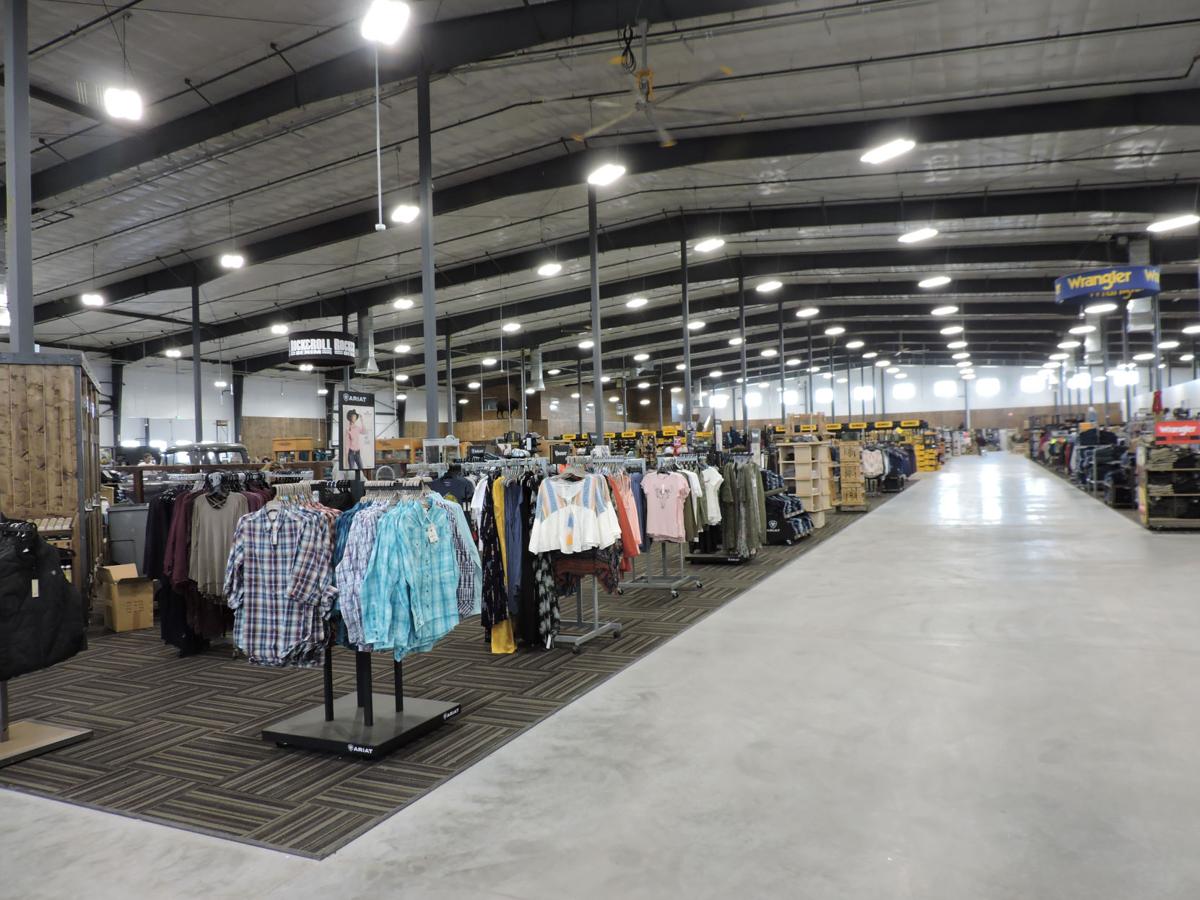 Racks of clothing stretch down an aisle of Ranch & Home in Hermiston during the first day of its soft opening earlier this year. 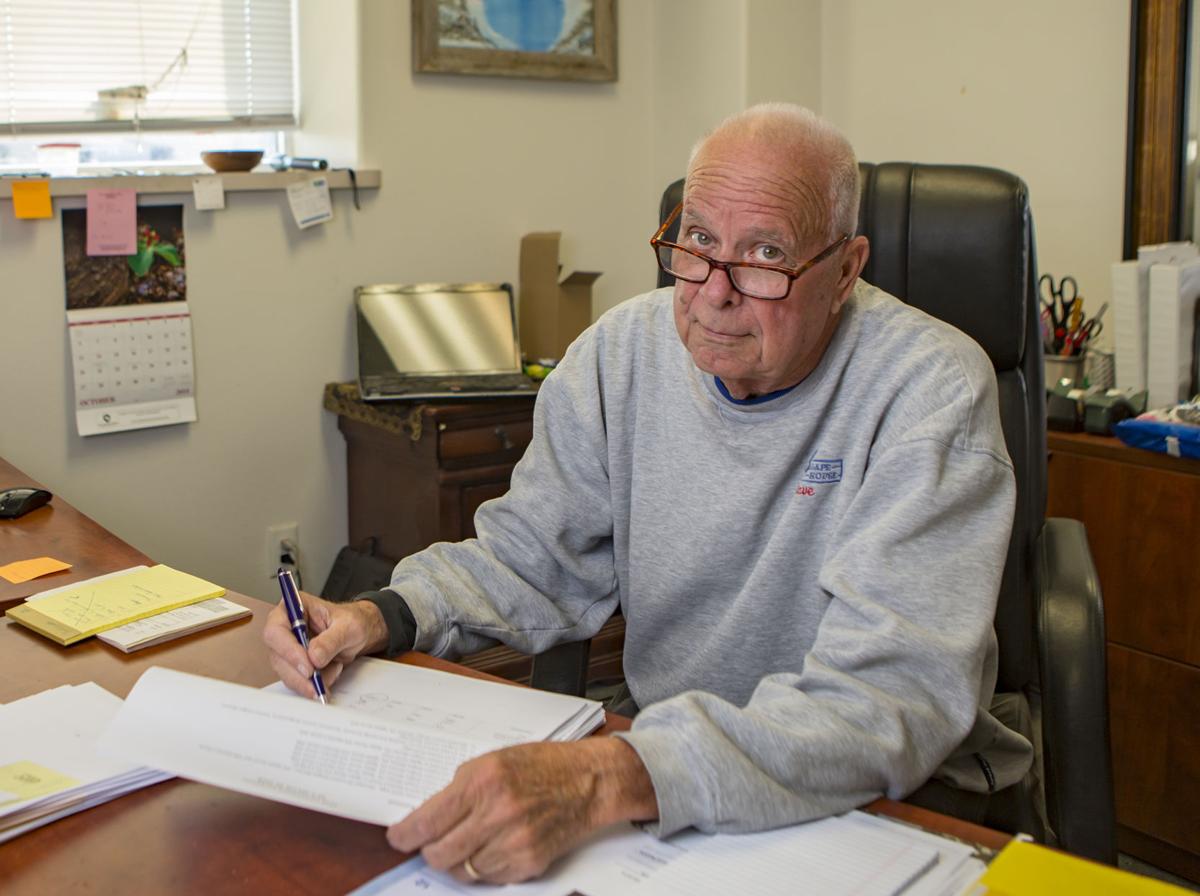 Agape House Executive Director Dave Hughes poses for a portrait at his desk.

Union Pacific Railroad announced in March that it would lay off 500 additional employees for the Hinkle Rail Yard outside of Hermiston.

2019 was a year of highs and lows for Hermiston. A major employer closed its doors, residents were furious about a water rate increase and the city lost a beloved playground to arson. But the top headlines also tell a story of hope a growth, from major new investments in the community to voters passing a new bond to pay for new schools for Hermiston children.

Below are our top 10 stories of the year, which we ranked with assistance from a reader poll on our website:

1) Union Pacific lays off most of its Hermiston employees

The railroad played a central role in Hermiston’s origin story and was a reliable source of family-wage jobs for decades, but that chapter came to a close in 2019.

In March, employees told the Hermiston Herald that Union Pacific had laid off at least 80 employees at the Hinkle Rail Yard over the past few months and closed the yard’s hump. In May, the company announced it was laying off an additional 195 employees, leaving only a skeleton crew at the yard and closing the supply warehouse and mechanical shop.

Oregon’s senators called for answers from Union Pacific in a letter stating it would “devastate this rural community by hamstringing the economic opportunities and stability of the entire region.” They wrote that growers and other shippers in the area had already been complaining of major issues with Union Pacific after their first round of layoffs, and cited safety concerns that ex-employees had expressed to the Hermiston Herald.

The community responded by offering up services for families that had lost their income and putting together an emergency job fair to encourage people to stay in the community.

After the City of Hermiston’s restructure of its water rates kicked in on March 1, anger built among residents of the city who had seen their bill go up significantly in the wake of the new rates.

The updated rates were based more heavily on usage, with any water over 15,000 gallons a month increasing from 50 cents to $3.50 per 1,000 gallons. While some residents saw minimal increases, others took to social media and an August city council meeting to testify that their bill had doubled or more. They said they had stopped watering their lawns or taking daily showers to afford their bill.

Despite pushback, the city council kept the rates the same, stating that the revenue was needed for projects to protect the integrity of the city’s water system and keep it running, including replacing crumbling, century-old pipes.

An $82.7 million bond passed by voters in November will ring in the replacement of the Hermiston School District’s oldest elementary school, Rocky Heights, and add a new elementary school on Theater Lane. It will also fund an annex to increase capacity at the high school, elementary school site improvements and purchase of new property for future growth.

The changes will eventually result in a redrawing of elementary school boundaries to ease crowding.

The passage of the bond resulted from an election that kept supporters and dissenters alike on the edges of their seats until late into the night. Eventually, the measure was approved by 52.4% of Hermiston voters.

That success was the first of its kind in over a decade and followed a failed measure in 2017, for a $104 million bond which aimed to replace Rocky Heights and Highland Hills, among other projects. This year, administrators and board members acknowledged that the bond was too big an ask for the community.

It was the first bond to pass under Superintendent Tricia Mooney’s leadership. It was also the first time that the political action committee, Yes for Hermiston Schools sought campaign management from a third party, Pac/West Communications.

On May 10, Hermiston lost a treasured piece of the community when the Funland playground at Butte Park burned down in the early morning hours.

The large wooden structure was originally built by volunteers in 1996, then rebuilt with an even larger community effort in 2001 after arson destroyed it.

After the fire in May, the city put together a committee of citizens and city councilors to choose a company to build a new playground. They unveiled designs for a “bigger, better and stronger” playground in December that would be made out of fire-resistant recycled plastic with an ADA-accessible rubber ground covering, broken up into themes such as Wild West and agriculture. They plan to begin fundraising as much as $810,000 before attempting to complete the new playground by Sept. 2020.

In October, the Hermiston City Council and Umatilla County Board of Commissioners agreed to give Amazon a 15-year property tax break for a new development the tech giant has planned for southeastern Hermiston.

In exchange for not paying property taxes, Amazon promised to pay $40 million over the course of the 15 years, spread between the city, county and other local taxing districts such as Hermiston School District and Umatilla County Fire District 1. The city and county have not made final decisions on how their portion will be spent, but have discussed using it for mutually beneficial projects such as paving Gettman Road in Hermiston.

The decision caused discussion in the community about the role of such tax breaks. While some pointed out that $40 million is much more than the taxing districts get each year from the bare ground currently there, others questioned why a trillion-dollar company shouldn’t pay its full share of local property taxes.

NORPAC’s closure of the Hermiston Foods vegetable processing plant was one of the top stories of 2017, but in 2019 the facility finally found a buyer in local farmer Alan Cleaver.

Cleaver, who owns Columbia Basin Onion and related companies in Hermiston, announced in May that he was purchasing the plant in order to use it to extract CBD oil from hemp for pharmaceutical purposes, under the name Columbia Basin Extraction.

Since the federal government legalized industrial hemp — which does not contain the high-inducing THC that its cousin marijuana does — last year, Cleaver has been growing the new crop to be used for medicinal purposes. He retrofitted the former Hermiston Foods building to extract CBD from dried hemp pellets using a cold extraction method with denatured ethanol, and told the Hermiston Herald in May that he planned to hire 30 to 40 employees.

Hermiston’s housing market got set to grow this year, as new subdivisions broke ground or passed through initial hurdles such as annexation or rezoning.

In April, the city council annexed 11 acres on the northwest corner of West Theater Lane and Northwest Geer Road for Monte Vista Homes, which planned to build 53 single-family houses and one multi-family project on the property. The same month, Northwest Housing Alternatives broke ground on a 48-unit apartment complex on Southeast Sixth Street.

In May, the council approved another annexation, this time 9.35 acres on Elm Avenue across from the Oxbow Trail entrance, where FDM Development plans to build 39 new homes.

In July, the council approved the final plat for the eighth and ninth phase of the Highland Summit subdivision, which includes another 40 lots.

In November, the city annexed 36 acres at the intersection of Elm Avenue and Diagonal Road, where Lloyd and Lois Piercy plan to build 25 acres of “moderate” single family homes and a selection of duplexes and triplexes containing approximately 45 accessible units designed for residents age 55 and older.

In December, after adding dozens of townhomes to the first phase of the Cimmaron Terrace subdivision, VestCapital broke ground on the second phase, which will begin with 38 new single family homes and include a new 7-acre public park.

It was the news that didn’t actually happen: city manager Byron Smith confirmed to the Hermiston Herald in October that a potential buyer for the Hermiston Community Center had come forward and was in the process of doing due diligence on the property before making an unsolicited offer.

The plan back then was for the person or company, who the city declined to name, to present a proposal to the city council at a date in the near future, but by the end of 2019 the mystery buyer had yet to step forward.

If the sale did take place, it would be big news for Hermiston. The city purchased the former Safeway and surrounding property for $544,000 in 1994 and the community raised another $665,000 for its renovation, according to the Hermiston Herald archives. It has since been used regularly for community and private events, and currently houses the offices of the city’s parks and recreation department.

Many businesses opened and closed in Hermiston during 2019, but likely the most anticipated opening was Ranch & Home, a large retailer based in the Tri-Cities that offers western clothing, tools, hunting and fishing supplies, barbecue grills, lawn care supplies and other outdoor-related items.

The retailer announced plans for a Hermiston store in early 2016, planning to open by the end of 2017. But continued delays (they did not return months of calls from the Hermiston Herald asking what those delays were) made speculation about the store’s opening a near-constant presence on community Facebook pages, and “when Ranch & Home opens” a local punchline to jokes about things that would never happen.

The company handled the jokes with good humor, however, with a satirical April Fool’s Day video stating that the building would be turned into a retirement home since that’s what current Hermiston residents will need by the time it opens. The store’s actual opening date was April 19.

After more than 15 years at the helm of Hermiston’s food bank and social services organization, Dave Hughes retired from the Agape House (run under Eastern Oregon Mission, along with family shelter Martha’s House), in October and loaded up an RV with his wife Jodene. The pair headed straight to Globe, Arizona.

Hughes, 73, took the director position at the organization back in 2002.

Until the Eastern Oregon Mission board selects a new director, Cathy Putnam of Hermiston is currently serving as interim director of Agape House.