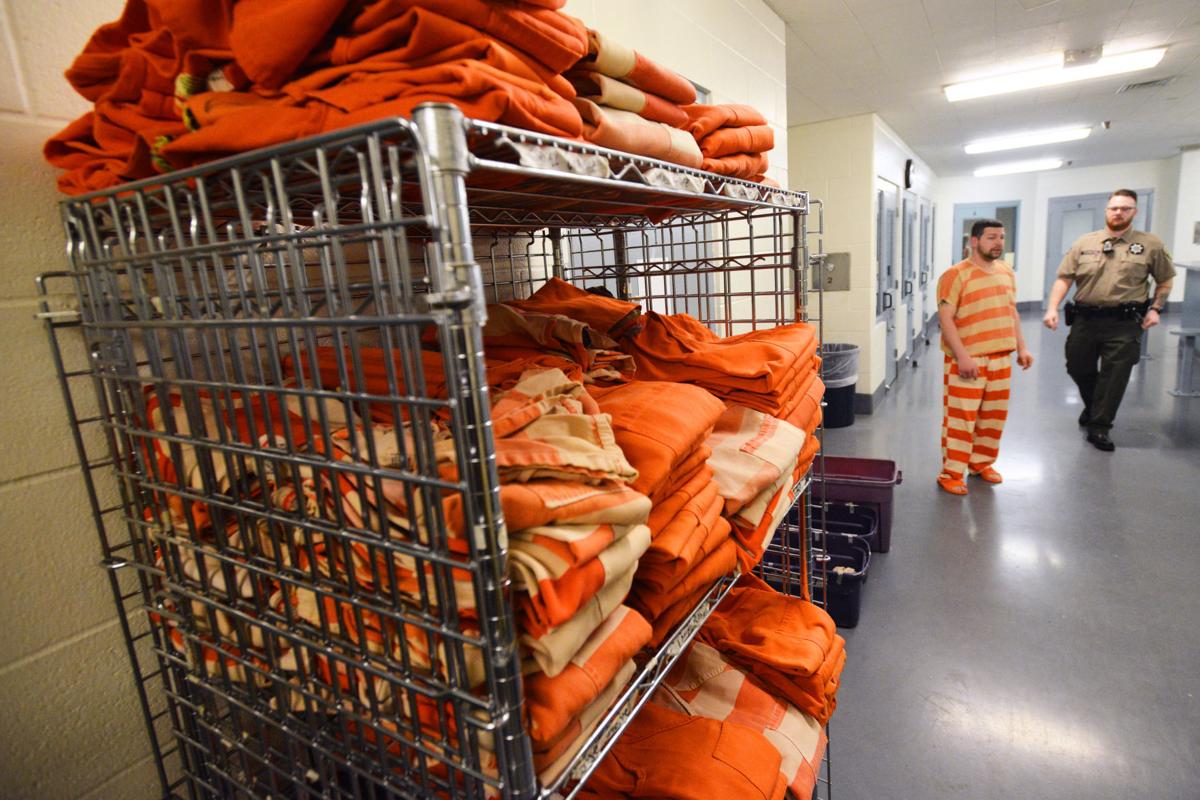 Jail uniforms sit out on a rack in the booking area at the Umatilla County Jail in Pendleton. 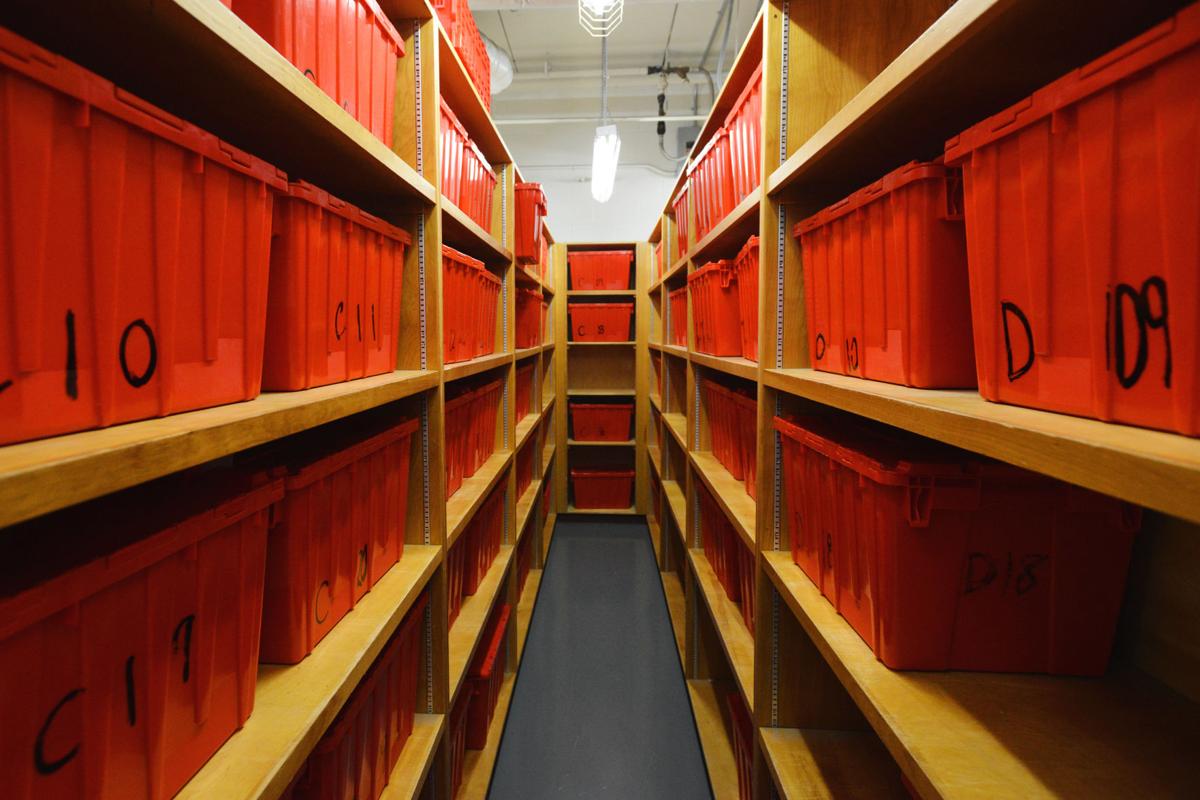 The Umatilla County Jail running out of storage space for the personal affects of inmates, files, and necessary supplies for the day to day operation of the facility. 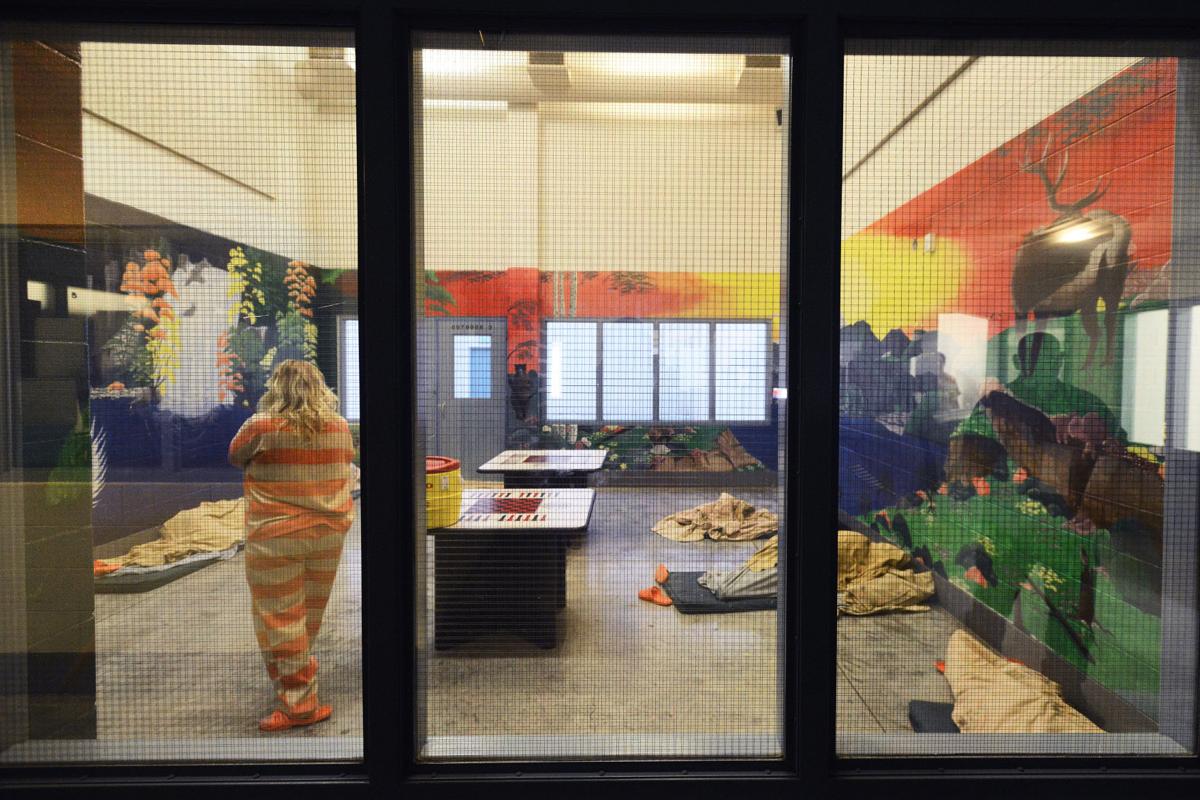 Female inmates sleep on mats in a recreation area at the Umatilla County Justice Center on Thursday in Pendleton. The jail, which was designed to hold a maximum of 180 inmates, currently is housing 229 inmates.

Jail uniforms sit out on a rack in the booking area at the Umatilla County Jail in Pendleton.

The Umatilla County Jail running out of storage space for the personal affects of inmates, files, and necessary supplies for the day to day operation of the facility.

Female inmates sleep on mats in a recreation area at the Umatilla County Justice Center on Thursday in Pendleton. The jail, which was designed to hold a maximum of 180 inmates, currently is housing 229 inmates.

The money would pay for a major revamp at the county jail in Pendleton to allow the intake and temporary housing of offenders suffering mental crisis, medical issues or addiction.

“Those three areas seem to be significantly on the rise,” Rowan said.

The jail was designed 20 years ago to hold some 130-180 inmates. Thursday morning’s shift started with 229.

Much of that fulfills Rowan’s promise to hold offenders in jail until they see a judge. But people with mental illness are an increasing part of the offender population, and their crimes are often petty, such as throwing rocks at windows.

“To me, it makes perfect sense some of that population never land in jail,” Rowan said.

The Blue Mountain Recovery Center in Pendleton used to take some of those offenders, but the center closed in 2014. Local police lament how officers can spend hours on one shift dealing with a lawbreaker in a mental state. Those offenders also are often high or drunk. Detoxification centers won’t take someone in the middle of a mental episode, and mental health providers won’t take someone under the influence.

That leaves the jail.

But Rowan said the jail lacks the capacity to handle inmates who are delusional, high or both. That person may need to be alone in a holding cell, he said, and the jail’s intake center has two holding cells for multiple inmates. Jail staff even converted one of two small strip search rooms into a small cell.

“What we’re seeing is a bottleneck in the booking area,” Rowan said.

The fix would be an $800,000 renovation to help accommodate inmates with mental health problems. That does not include the cost of moving and installing security cameras and the like.

LCA Architects, Boise, designed the jail, and Rowan said he had the company visit last year. That led to a proposal to convert one of the jail’s two sally ports into new holding areas and a book-in site. That would provide space for someone in a crisis. The plan also uses existing space to add eight beds to the intake area.

The only new construction would be for storage.

Large red plastic bins for inmate belongings fill nearly all the shelves in one room. Files about inmates threaten to take up another. The mobile rack for inmate clothing has no closet and sits next to a wall. Franks said staff cram extra mattresses into a closet.

“Storage would be a huge help to the whole facility,” he said.

Restructuring the jail also would make it more efficient, Rowan and Franks said.

Umatilla County Jail is the regional hub for transferring inmates. Buses drop off multiple inmates each Wednesday and others take them away. That happens in the second sally port, where inmates wait inside a wire cage up to five hours.

Franks said while the sally port has video cameras, staff have to be in the room monitoring the inmates. New holding cells would allow video surveillance alone and not tie up an officer for half a shift on one task.

Umatilla County Commissioner George Murdock backs Rowan’s plan. He said just as the jail is a transfer hub, it could serve as a regional mental heath drop-off facility.

“We’re talking about what to do with individuals who are a danger to themselves and others and who are on the street,” Murdock said. “We would benefit Wallowa, Morrow, Union, and Umatilla counties.”

The commissioner also pointed out when the state’s prison population was growing too large, lawmakers created the Justice Reinvestment Initiative Act, the grant program to provide counties with funds to keep offenders out of prison while keeping the public safe. Murdock said the state should follow a similar model to help local governments deal with mental health problems.

Amy Ashton-Williams, director of Umatilla County Human Services, said most people who have mental health issues do not commit crimes. They take medications, follow their therapy and are productive members of the community. But 10 percent, she said, tax the system.

Still, she said, the environment in jail can harm people in crisis. Someone displaying mental problems, for example, could spend more time in lockup than other offenders. She said space and staff at the jail for mental health would help stabilize someone and get them into services they need.

Rowan gets to make his pitch for state funds Friday afternoon in Salem to the Legislature’s Subcommittee On Capital Construction. He discussed the proposal in November with Republican state lawmakers Sen. Bill Hansell of Athena and Rep. Greg Barreto of Cove, but neither serve on the subcommittee.

Both Hansell and Barreto said they support the plan and see the need for it, but could not guess what the subcommittee might do.

Rowan said if the Legislature does not come through, he is not done pushing for this. He said there might be some opportunity through Justice Reinvestment grants.

Mental health is a local, state and national problem, Murdock said, and this proposal makes sense to house mental patients on an immediate basis.

“In Eastern Oregon,” he said, “you may need to sometimes find solutions that aren’t perfect but that work.”

Protests over George Floyd's death spread to Hermiston and Pendleton