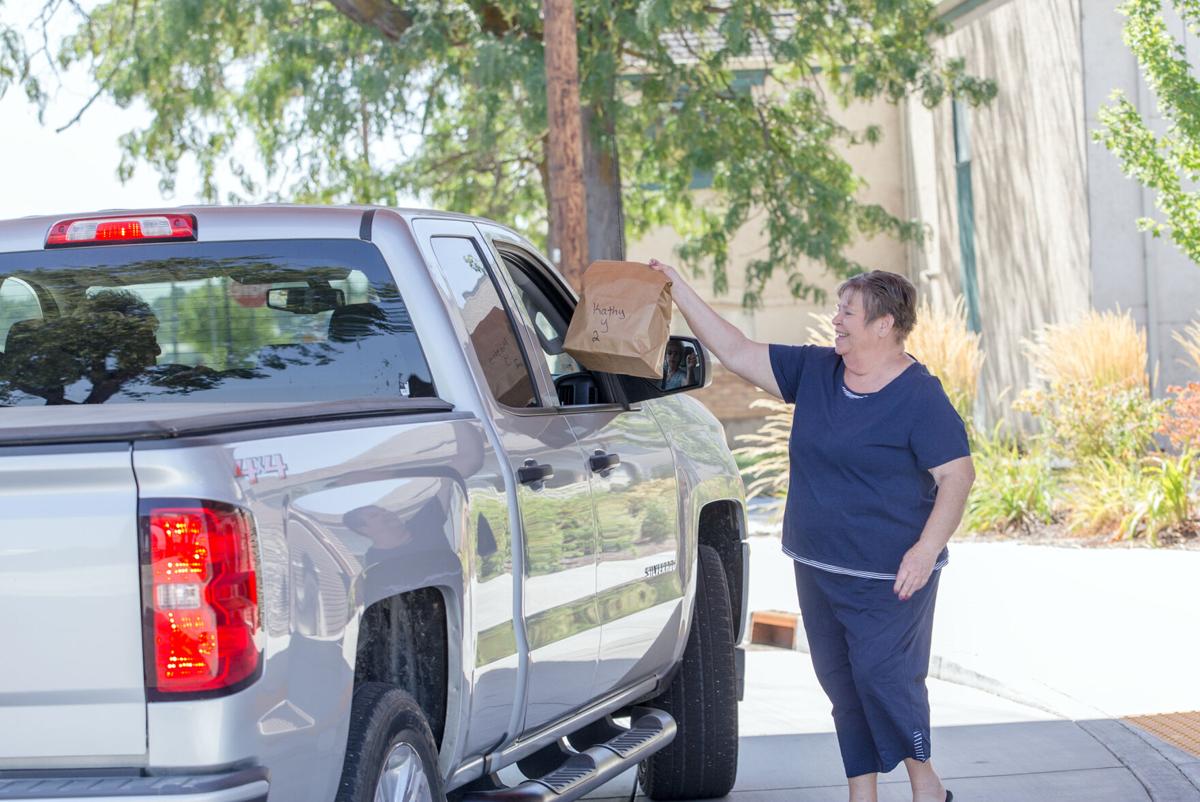 Julie Rosner, of the Harkenrider Senior Activity Center, hands a lunch through the window of a pickup truck on Tuesday, August 4 as part of a twice-a-week program that takes the place of lunches at the center. 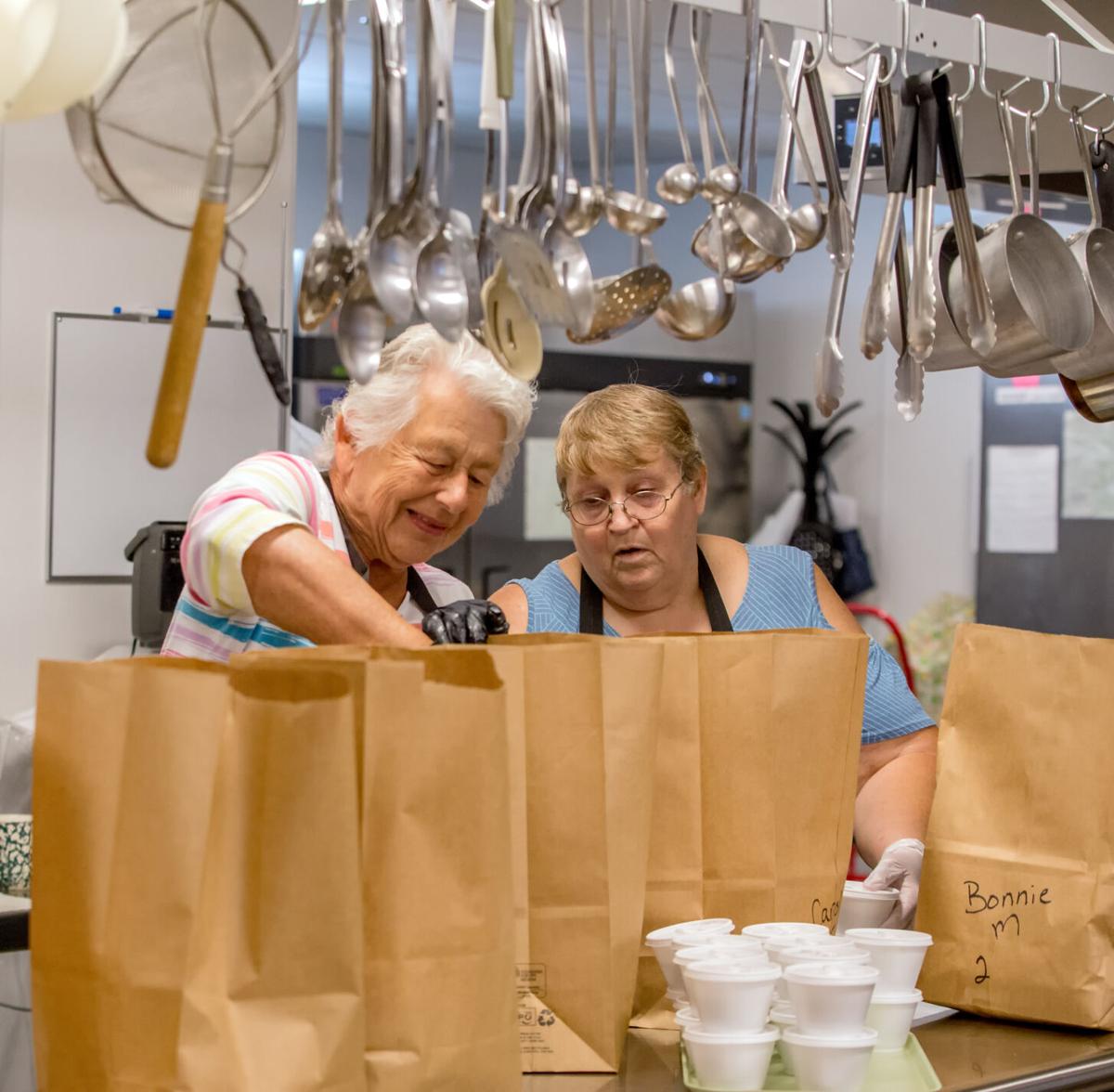 Louis Ables and Karen Blair pack lunches in the Harkenrider Senior Activity Center kitchen for pickup by seniors who drive to the center’s front entrance.

Julie Rosner, of the Harkenrider Senior Activity Center, hands a lunch through the window of a pickup truck on Tuesday, August 4 as part of a twice-a-week program that takes the place of lunches at the center.

Louis Ables and Karen Blair pack lunches in the Harkenrider Senior Activity Center kitchen for pickup by seniors who drive to the center’s front entrance.

The Harkenrider Senior Activity Center may be “closed,” but its board members are still finding ways to serve seniors in Hermiston.

The senior center, which served in-house lunches five days a week before the pandemic, now provides meals twice a week by pick-up or delivery at its building at 255 N.E. Second St. behind First United Methodist Church.

In June, they provided 591 meals, and had provided 602 before the final meal date in July. Board secretary Judy Fordice said those totals are comparable to what the center was serving when meals were provided five days a week instead of two.

“The numbers are really up there,” she said.

Almost half the meals are delivered to homes by Meals on Wheels volunteers. Head cook Karen Blair said deliveries are “way, way up,” likely because many seniors in the community are afraid to leave their homes when they are at high risk for COVID-19 complications. She said they have also seen a significant number of new people who said they had not previously been aware of the service before they began getting the Hermiston Herald for free in May.

Coordinating volunteers for delivering meals has been a struggle, board members said. They need people who are able to run the same route week after week, so that seniors aren’t surprised and worried by a stranger on their doorstep, and so that the drivers can get to know the people on their route and notice when something is wrong.

“Some of our elders at home that we deliver to, our Meals on Wheels drivers are the only contact they have for days, and our drivers are aware of that,” Fordice said.

Willard Fordice, Judy’s husband, said as restaurants have done more takeout and delivery as well, the senior center has had a struggle getting enough disposable takeout containers to hold meals, particularly microwave-safe ones for the Meals on Wheels deliveries.

When people were coming inside the senior center to eat or to participate in activities, they would often bring offerings of fresh produce from their gardens. Virginia Beebe said she has missed that.

“You can still drop off donations,” she said. “If we can’t use it in a meal, we can still give it to people.”

Board members said some people have still been good about donating to the senior center, and area farms have donated potatoes, onions and watermelons. When restaurants were first shut down in March, Nookie’s Restaurant and Brewery donated a large amount of perishable food the restaurant just had delivered the day before but could no longer use. Other organizations donated toilet paper during the toilet paper shortage so that they could offer a roll to Meals on Wheels recipients who needed them.

With lines longer than usual at the Hermiston Bottledrop, the board said they have also seen an increase in can and bottle donations, which helps fund the extra cost for takeout containers for meals.

Seniors can enter the building one at a time to borrow a large-print book or a puzzle from the center’s collection.

Board members said the isolation of the pandemic has been difficult for senior center members who used to spend social time at the center playing cards, taking classes or making crafts together. Virginia Rome Garcia said many are passing the time at home with hobbies like quilting or genealogy work.

“They stay home for security and health reasons,” she said.

Irene Miller, who has been an active leader in the senior center for many years, said she is grateful for the Meals on Wheels deliveries she gets twice a week. The 98-year-old said she makes lap blankets to donate to local nonprofits, so she doesn’t “just sit there and fall asleep.” She also uses Facetime to video chat with friends and family daily.

“I had a lady call me yesterday, wanting to know if I had run out of yarn yet, and I said yes, so she said she’ll put the word out,” Miller said. “So I might get some yarn left in my yard.”