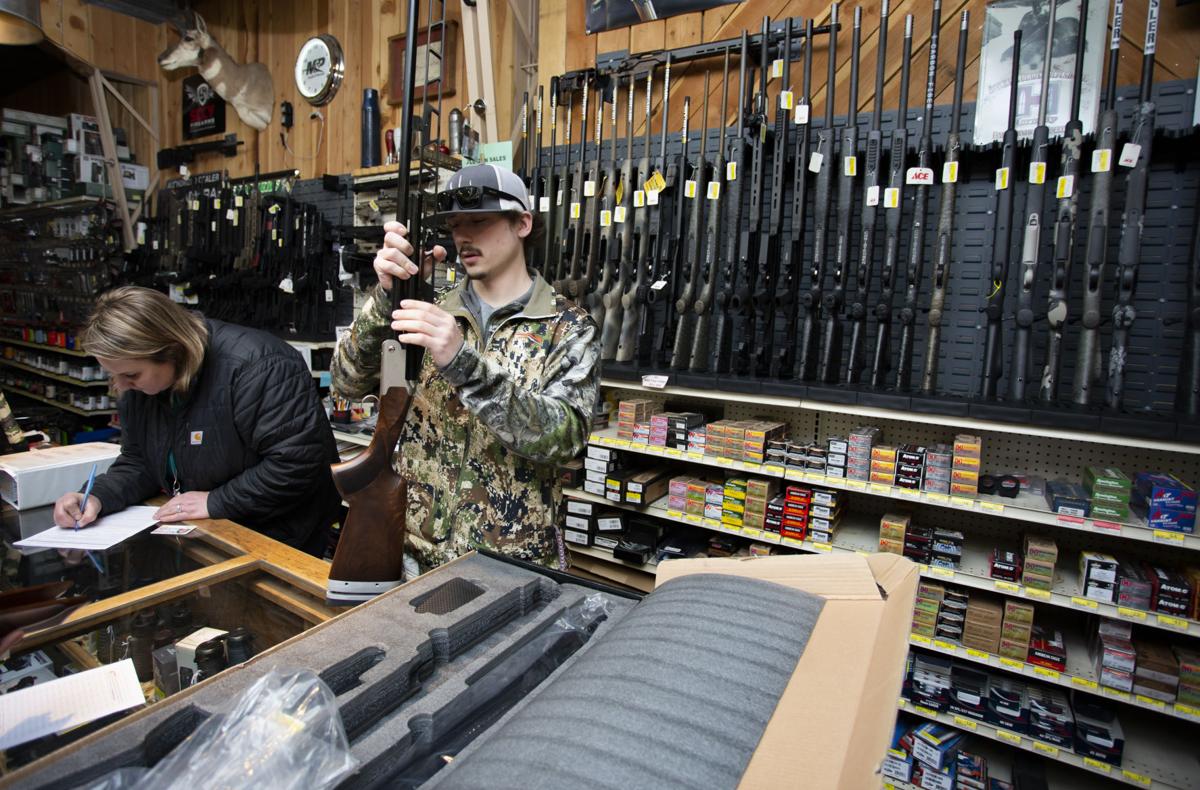 Seth Cranston assembles a shotgun for a customer at Smitty's Ace Outpost in Hermiston on Wednesday afternoon. 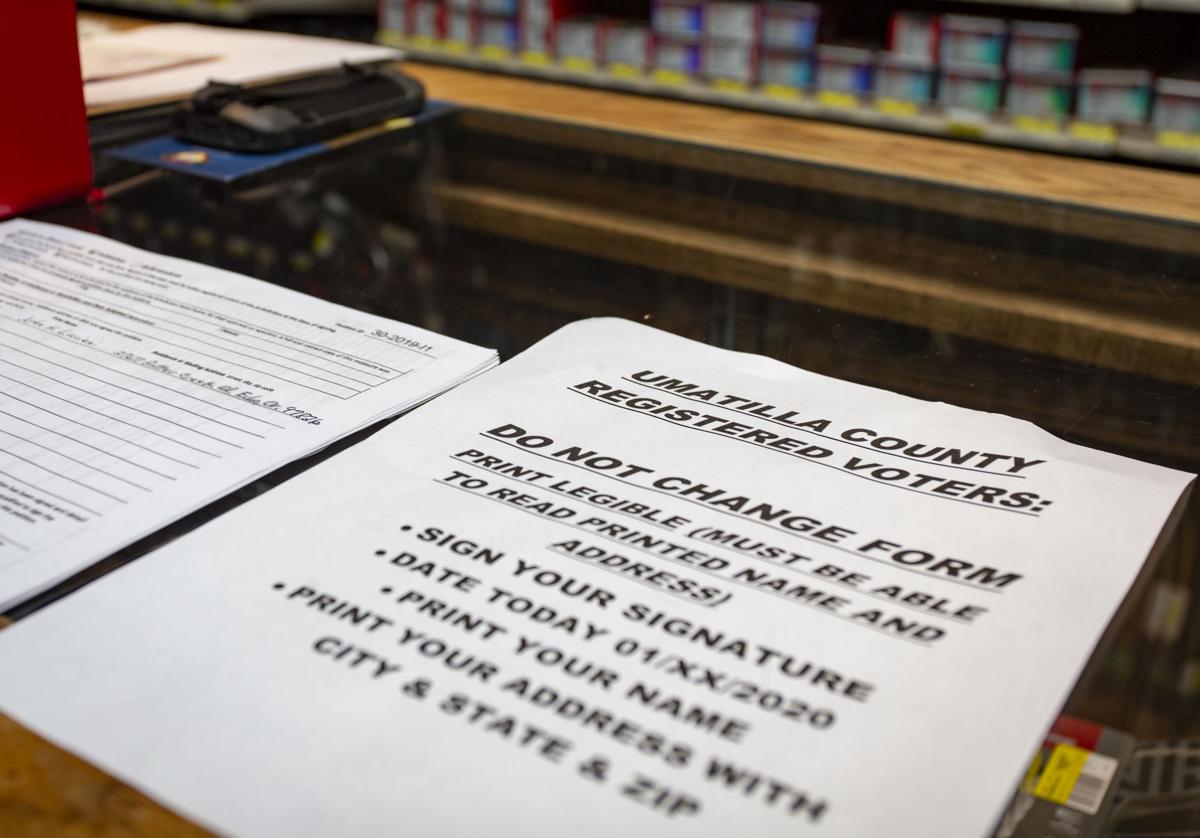 A sign provides shoppers with instructions if they wish to fill out a petition to make Umatilla County a Second Amendment Sanctuary at Smitty's Ace Outpost in Hermiston on Wednesday afternoon. 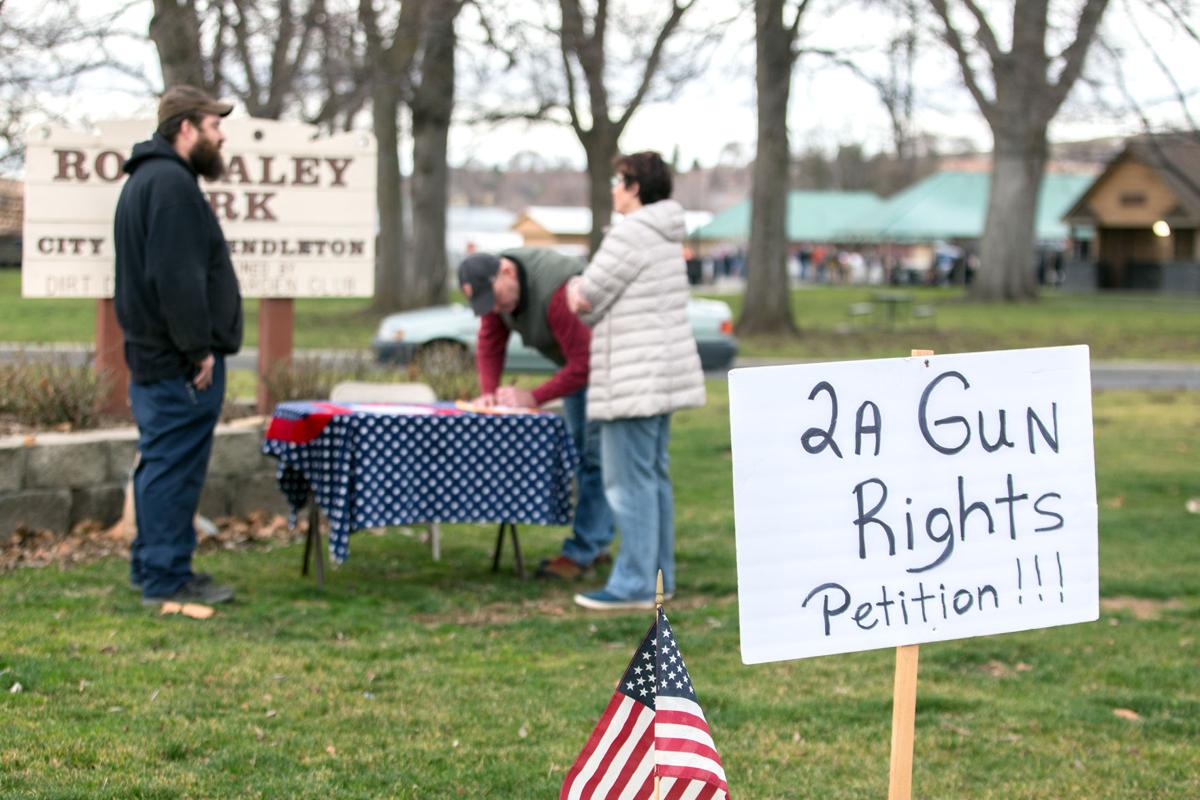 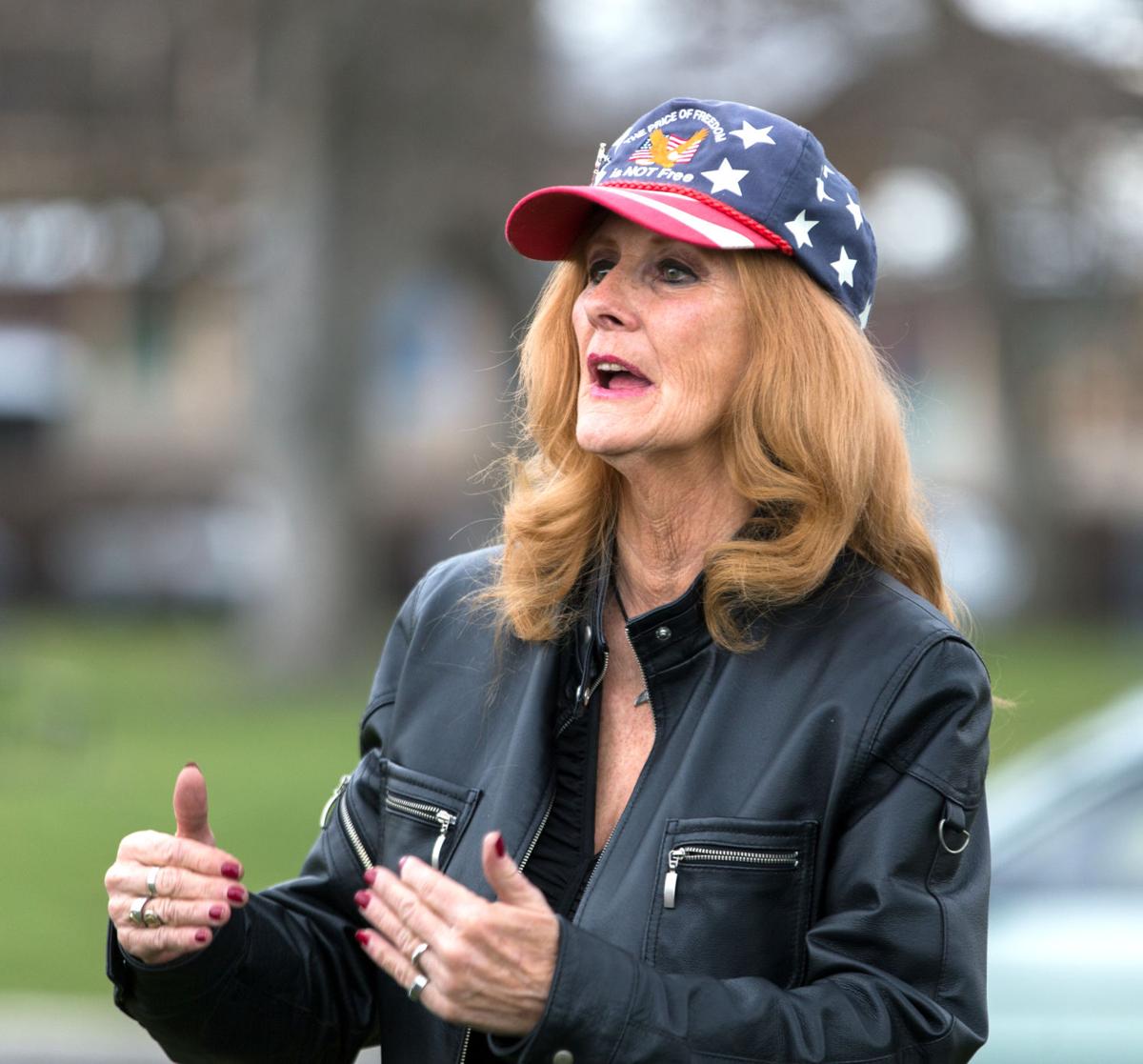 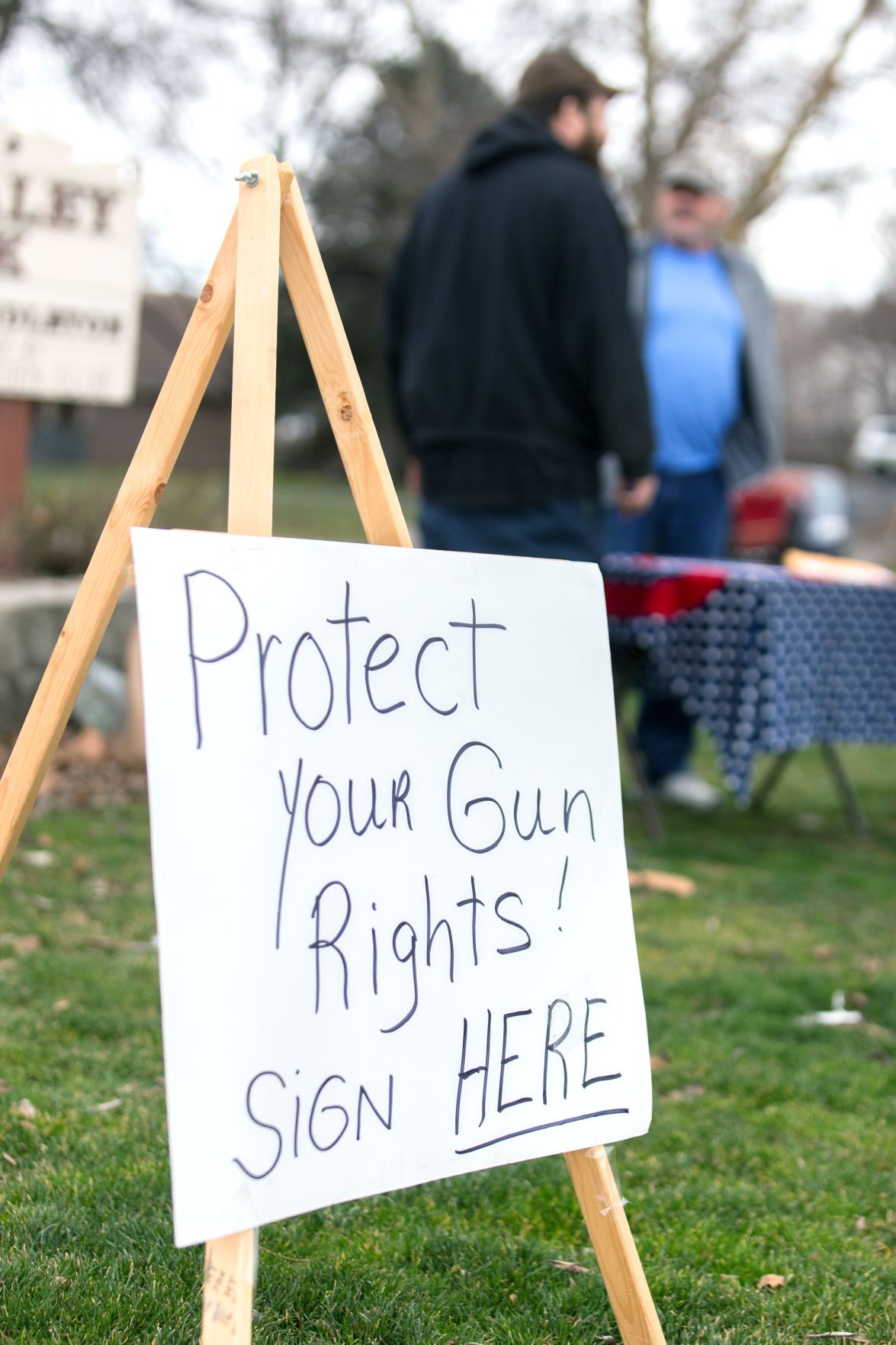 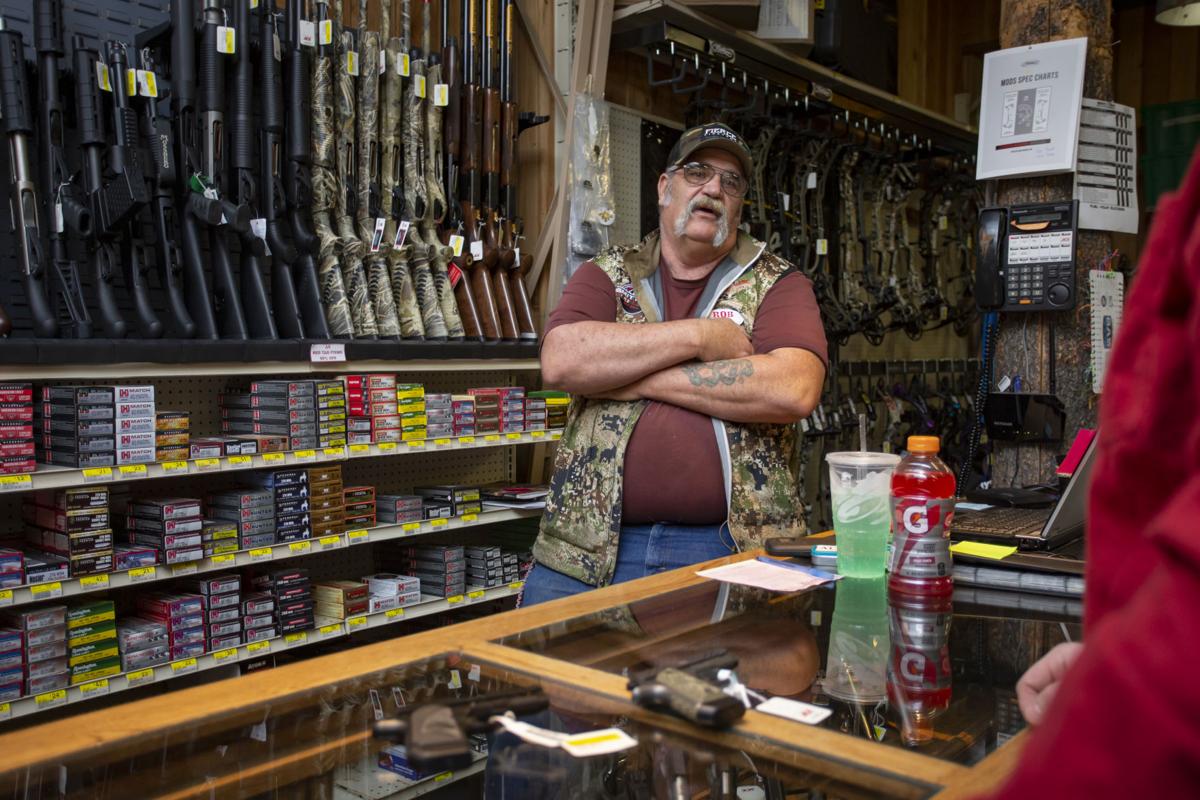 Robert Roberts mulls over a prospective firearm purchase with a customer at Smitty’s Ace Outpost in Hermiston on Wednesday afternoon. 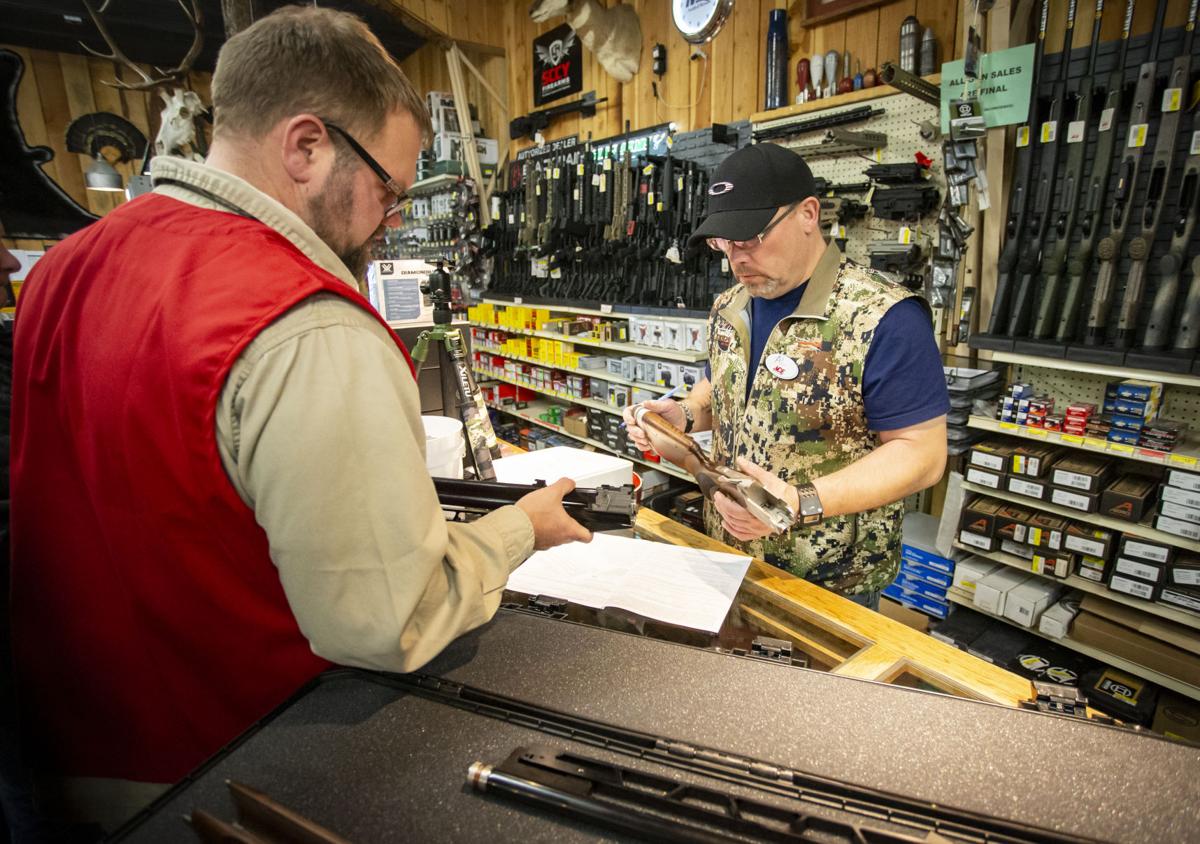 Al Plum, right, records the serial number off the stock of a shotgun while store owner Randy Smith inspects the gun's barrel at Smitty's Ace Outpost in Hermiston on Wednesday afternoon. 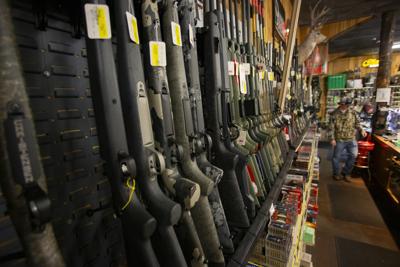 As the Oregon Legislature begins this week in Salem with potential to enact stronger gun control laws, voters may again get the choice to reinforce Second Amendment protections throughout Umatilla County in May.

Jesse Bonifer, a regional liaison with the militia group Oregon III%, and other Second Amendment activists started gathering signatures at Pendleton’s Roy Raley Park on Saturday in an attempt to land the Second Amendment Sanctuary Ordinance on the county’s May ballot.

“I just want to be able to protect our gun rights in Umatilla County,” Bonifer said.

The sanctuary ordinance bears the same language as those popping up in cities and counties across the country in an attempt to confront potential gun control legislation in 2020. In Morrow County, the Lexington City Council unanimously passed the ordinance last month.

According to a copy of the ordinance provided by Bonifer, if enacted, any agency, political subdivision or employee of Umatilla County would be unable to officially participate “in the enforcement of any act, law, order, rule, or regulation issued regarding a personal firearm, firearm accessory, or ammunition.”

The ordinance would also prevent the county from using “assets, county funds, or funds allocated from the state to the county” to aid in any enforcement of gun regulations. Those that violate the ordinance would face a civil violation with a maximum fine up to $2,000 for an individual or $4,000 for a corporation.

Bonifer needs to submit 1,610 signatures of registered Umatilla County voters by Feb. 19 to the county election’s office in order for the commissioners to place the ordinance on the ballot, and currently is planning future signings. He has petitions placed at locations in Pendleton, Hermiston and Milton-Freewater.

The sanctuary ordinance is Bonifer’s second attempt to expand on the Second Amendment Preservation Ordinance, which he successfully petitioned onto the ballot in 2018 and later passed with over 65% of the vote.

The preservation ordinance, which would not be altered or removed by the passage of the sanctuary ordinance, currently restricts the county from using resources to enforce state or federal laws that infringe on the constitutional right to keep and bear arms, while simultaneously granting the sheriff the authority to rule on the constitutionality of those laws.

Last year, Bonifer asked the Umatilla County Board of Commissioners to bring a previous version of the sanctuary ordinance to the voters. However, County Counsel Doug Olsen said the ordinance’s language was unconstitutional when first proposed and there wasn’t enough time to gather signatures by the time it was edited.

This time around, Bonifer said he worked with Umatilla County Sheriff Terry Rowan on “reorganizing” the ordinance and sent it proactively to Olsen and the commissioners for review.

Olsen said he thinks the ordinance will pass the legal evaluations this time around, though that won’t officially take place until after the signatures have been submitted and verified by the elections office.

Rowan confirmed Tuesday that he’s spoken with Bonifer about the ordinance, though he said he’d yet to read its latest draft.

According to Bonifer, the primary motivation behind the ordinance is preemptive protection from gun control bills that may pass the Oregon Legislature in Salem, and there are two in particular in the crosshairs for 2020.

House Bill 4005, or the “safe storage” bill, would require gun owners to secure their weapons with a trigger lock or some other mechanism while not in use or being transported. Those who didn’t would be subject to a citation for a civil violation and could be held liable if their weapons were unsecured, and then used to commit a crime.

Senate Bill 1538 would allow local governments and school districts to ban concealed weapons on their premises, which they currently don’t have the authority to do when an individual has a valid concealed handgun license.

Bonifer has also reached out to the county’s Republican and Democratic parties, and so far has the support of one.

“I fully support the ordinance,” said Suni Danforth, the chair of the Umatilla County GOP. “I think any time we can support our Constitution and all of its amendments is a good thing.”

Mark Petersen, chair of the Umatilla County Democratic Party, hadn’t seen the ordinance personally yet but said he is a supporter of sanctuary cities that protect undocumented immigrants, which the ordinance drew its name from, and so he supports the right for citizens to try and protect themselves from federal or state regulations.

Petersen said he personally owns guns and is a member of the state’s Democratic Gun Owners Caucus. He said the caucus met twice for phone conferences this week to discuss the proposed “safe storage” bill, and adopted a position against it due to a lack of clarity in what safe storage actually is and the risk of excessive liability falling on gun owners when firearms are stolen.

HollyJo Beers is the county lead for Oregon III% and says she has been advocating for Second Amendment rights and protesting gun control actively for the last five years. Beers helped Bonifer put the preservation ordinance on the ballot in 2018, she said, and joined him again on Saturday to help gather signatures for the sanctuary ordinance because she believes these laws violate the U.S. Constitution.

“The state cannot come in and tell the county what they may or may not do in instances like this,” she said. “Especially if they’re not following the Constitution, which is very clear on Second Amendment rights shall not be infringed.”

Beers, who officially filed as a candidate on Monday for the opening seat on the county’s board of commissioners, voiced concerns of safe storage laws limiting someone’s ability to effectively defend themselves. She also mentioned red flag laws, which are already in place in Oregon, and the risk of someone wrongfully having their firearms taken from them.

Limiting these rights and disarming Americans, she said, is what the government wants in order to create a “slave society” that she likened to socialism, and she fears it’s just the start of more constitutional infringements to come.

“If the Second Amendment falls, all the rest of them go like dominoes,” Beers said. “And then you have no rights, and you’re no better off than Hitler’s Germany was.”

While the ordinance’s supporters are hoping its protections could ease extreme fears of regulation like these, there’s uncertainty if the ordinance would actually be enforceable and stand after legal challenges from the state or federal level.

At a state level, Oregon currently has a revised statute in place, ORS 166.170, that gives the Legislature sole authority to regulate firearms, unless explicitly authorized by another statute.

At a federal level, the sanctuary ordinance provided by Bonifer cites the 2008 U.S. Supreme Court case Heller v. District of Columbia as support of its protections because the court ruled the Second Amendment’s right to bear arms extends to an individual wishing to protect themselves, not just for use in a regulated militia.

However, federal laws regulating firearms have since been upheld thanks to this same court case, which also ruled that the rights in the Second Amendment are not unlimited and can be regulated.

As other municipal and county governments around the country have enacted the ordinance, they’ve also acknowledged publicly and privately that it’s mostly symbolic in nature and won’t have any impact on how laws are actually enforced.

John Shafer, county chair of the board of commissioners, said he is a supporter of Second Amendment rights and from his perspective, the ordinance could have a tangible impact in Umatilla County.

“I think it’s going to be more than that,” he said. “My understanding is that it’s not just going to be symbolic.”

But while Olsen thinks the ordinance meets the legal requirements to be placed on the ballot, he said on Tuesday that any laws violating the Second Amendment remain protected “with or without this measure.”

The enforcement of the ordinance ultimately comes down to Rowan, who said Tuesday he is “very much in support” of getting it on the ballot and into law.

“In election years there’s always a panic for those in support of our Second Amendment rights to keep them protected,” he said.

Rowan, who is also the president of the Oregon State Sheriff’s Association, was asked last week to make a trip to Salem to testify Tuesday morning in opposition of proposed gun control legislation but said he was unable to go due to previously scheduled appointments.

The state sheriff’s association and its lobbyist are keeping Rowan updated daily from the Capitol, he said, and he’s expecting to make future trips in the coming weeks to fight against any gun control legislation.

But in the event that gun control legislation passes in Salem and the sanctuary ordinance is voted into law this May, Rowan is expecting any enforcement from his department to be contested.

“When you have conflicting matters like this, there’s going to be legal challenges,” he said.

But Beers believes there’s value in standing up to those on the other side of the state that she and others feel aren’t listening to them regardless of the sanctuary ordinance’s eventual outcome.

“They don’t understand rural living, they don’t understand how people grew up here. It’s a totally different lifestyle,” she said. “We take into consideration that it is, but we want them to hear and pay attention that we as Oregonian taxpayers also have the right to live as we choose over here. It’s a matter of rights and trying to get them to notice that we will stand up.”