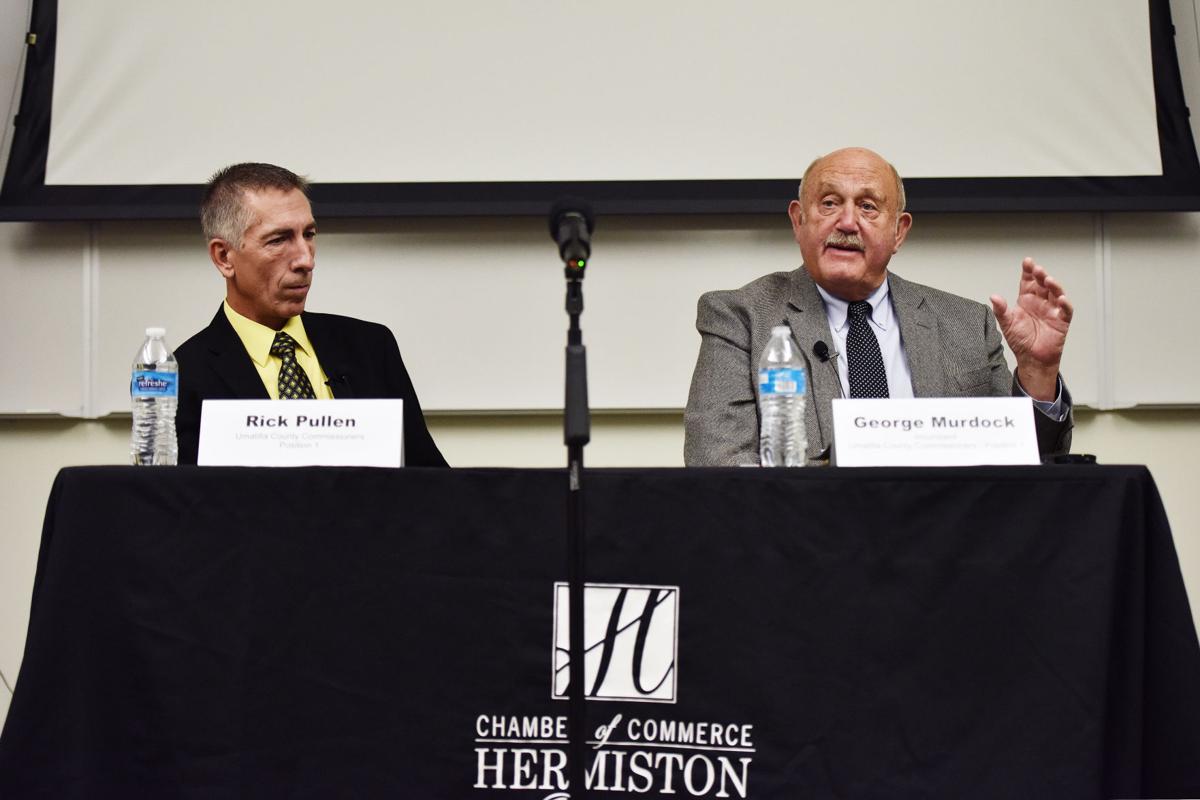 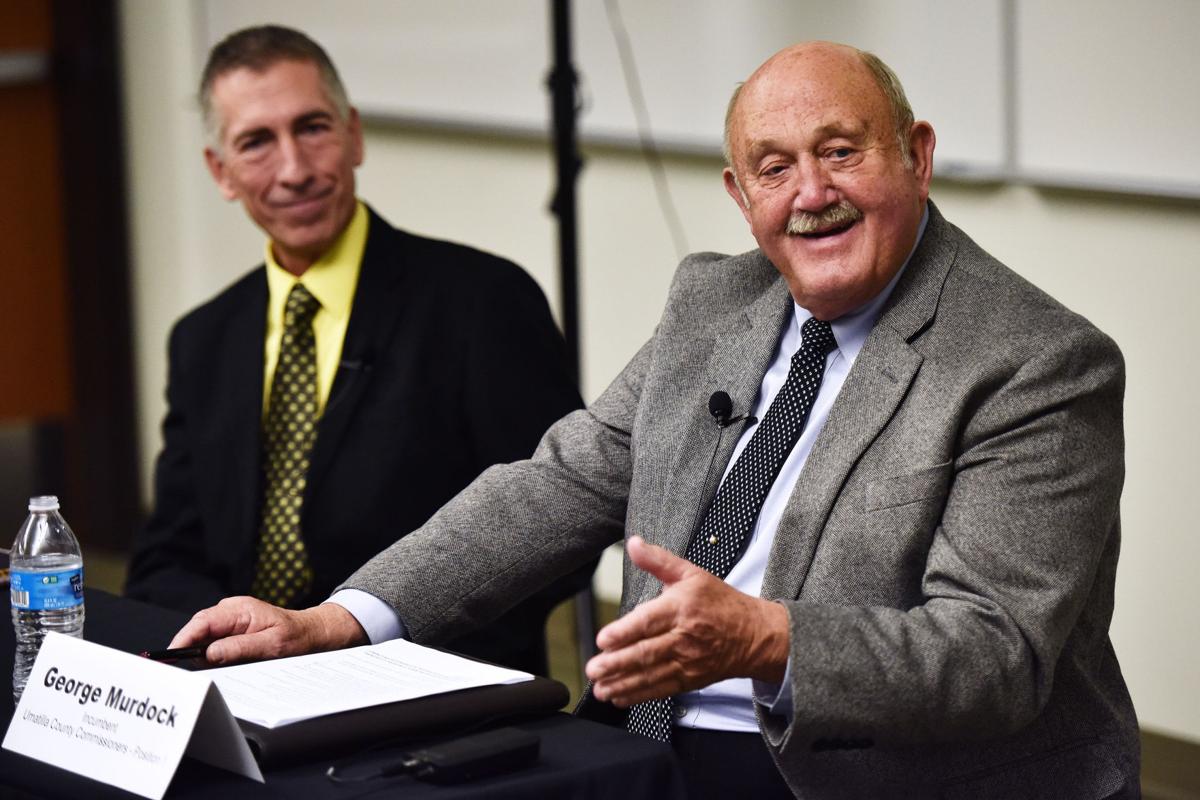 Umatilla County Commissioner George Murdock addresses the moderator while talking about his role in instigating the county charter review committee during the Hermiston Chamber of Commerce candidate forum as challenger Rick Pullen looks on Wednesday at BMCC in Hermiston. 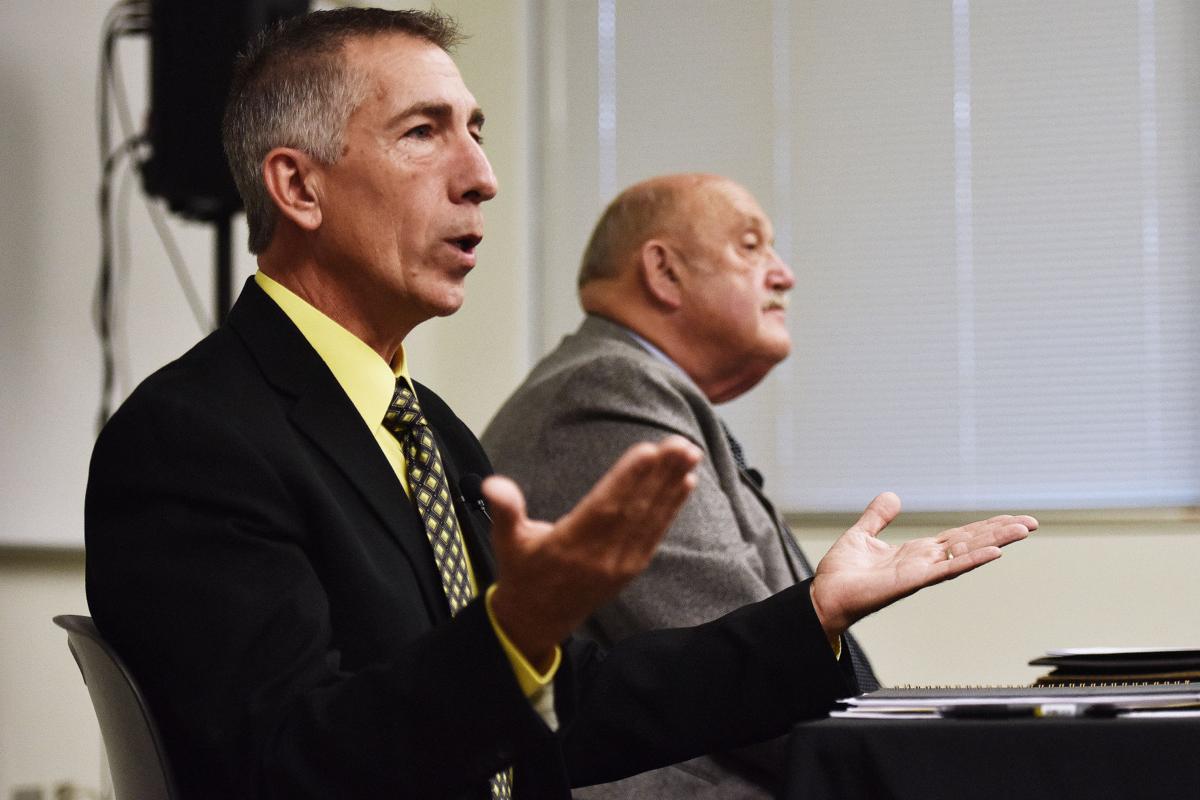 Umatilla County Commissioner challenger Rich Pullen gestures while raising a question to the audience as commissioner George Murdock looks on Wednesday at BMCC in Hermiston. 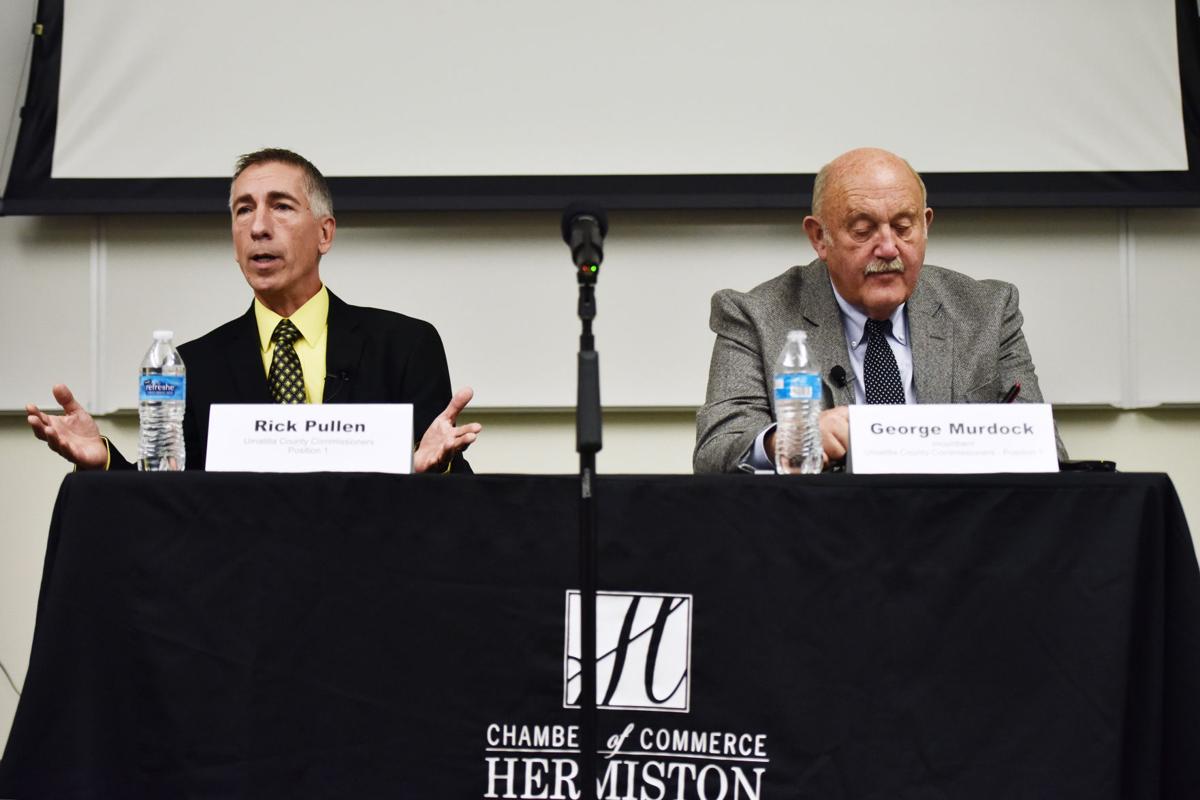 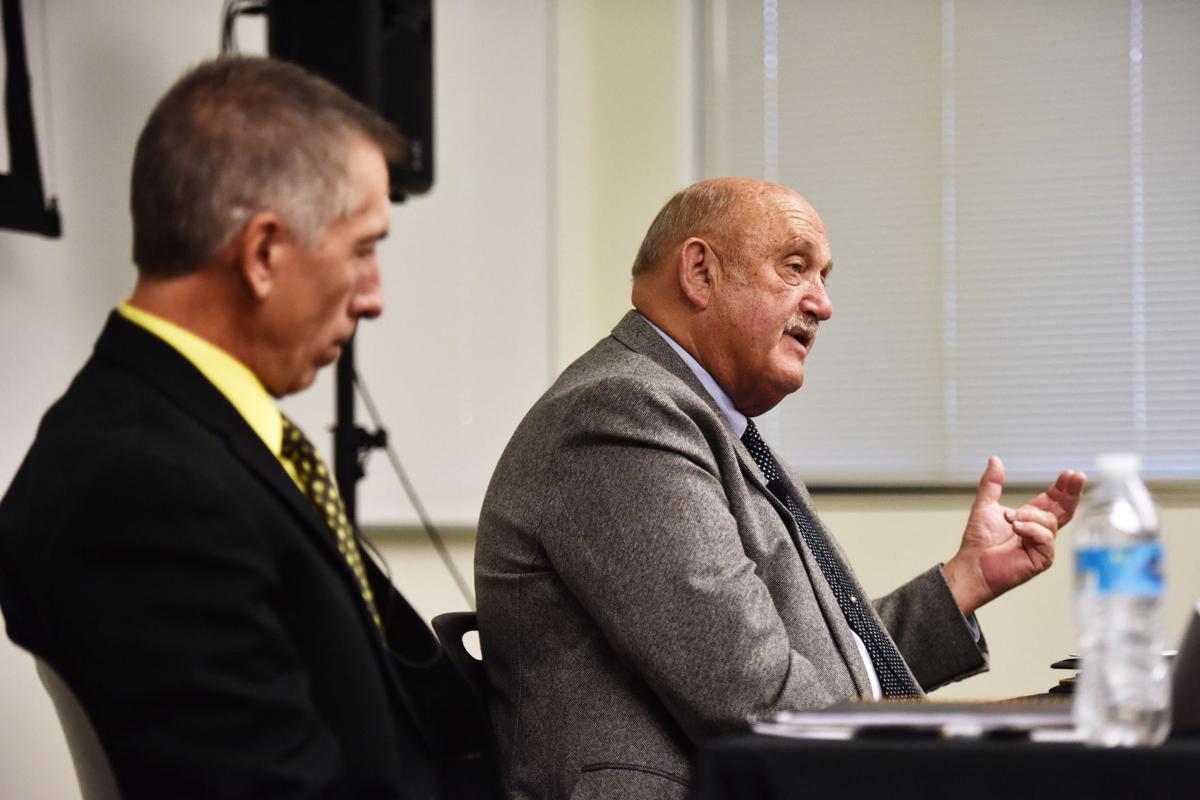 Umatilla County Commissioner George Murdock addresses the moderator while talking about his role in instigating the county charter review committee during the Hermiston Chamber of Commerce candidate forum as challenger Rick Pullen looks on Wednesday at BMCC in Hermiston.

Umatilla County Commissioner challenger Rich Pullen gestures while raising a question to the audience as commissioner George Murdock looks on Wednesday at BMCC in Hermiston.

Otherwise, they took familiar roles last Wednesday night during a local candidates forum in front of about 40 people at Blue Mountain Community College, Hermiston. The candidates during the span of a half hour answered the same questions, ranging from their achievements to the county’s role in economic development to how to get state money to take on the mental health crisis.

Both fell short of 50 percent of the vote during the May primary — Murdock took about 45 percent and Pullen 31 percent — and in the November run-off are staking similar ground as in their spring campaigns.

Murdock said he was proud of his work managing the county’s budget. Umatilla County has a history of budget difficulties, but the county in recent years has been providing a stable level of services. Murdock said the county looks to maintain its programs and perhaps implement the sheriff’s long-term staffing plan that would result in coverage just shy of 24 hours each day.

Pullen touted his 10 years of county management and transitioning the county’s Assessment and Taxation Department into the digital age, a move he claimed doubled employee efficiency.

As he took credit for the technological progress, he never mentioned the name of the department, nor the involvement of the county’s computer and internet technology personnel. He also skipped the fact the change is ongoing. Assessment and Taxation staff is using digital and paper this year. The department also did not get key software for the transition until February, a couple of months after Pullen quit his job.

Economic development and housing came up a few times. Murdock said the county helps communities in several ways, such as the recent economic development grants to Stanfield or providing technology services to Ukiah. The county also is contributing about $2 million to help Hermiston with the major housing development on the town’s north end,

Pullen said the county should be “shepherding” communities — working with and providing them resources and support they might lack. He said the board of commissioners made a mistake in recent years by taking on economic development itself, only to realize the need to hire someone for the job.

When the position became vacant about four years ago, Commissioner Bill Elfering and then-planning director Tamra Mabbott split much of the economic development role, which led to the creation of a grant process for projects with tangible benefits, such as job creation. Mabbott left last year, and the county board in February brought on a new economic development and tourism coordinator.

“If we can find a way to recharge the basalt aquifer that’s more of a long-term fix than building a water tank,” Pullen said.

They also differed on what the state should do to help the county address mental health needs.

Murdock said he is part of the group that meets each week to find a way to fund a $1.1 million expansion at the county jail to accommodate offenders with mental health problems. He said the group has identified possible matching funds for the project. He reiterated the notion that the state should create a mental health program akin to the Community Justice Reinvestment Act, which allocates funds to the local level to help keep offenders out of prison.

Pullen said getting state money would be an uphill battle. Oregon State Police is building its new crime lab in town, he said, and the state may not want to put more money into to another law enforcement project in the county. He advocated for a mental health crisis center that could distribute medication, but he said that would be expensive.

They found the most common ground on a question about what changes they would like to see to the county charter. The county formed a committee this year to review the charter, and it will present findings in 2019. Pullen said holding primary and general election for the board of commissioners is confusing, and with a county this size one election would suffice.

Murdock said as commissioner he should not comment on the committee’s work, but would support its recommendations. However, he questioned why a commissioner candidate who wins outright in the May primary — as John Shafer did this year — should have to wait seven months to take office.

Murdock said the county is complex, and he can implement in his second term all he learned in his first. He also said he can provide stability to the board with Shafer replacing Commissioner Larry Givens in January and Commissioner Bill Elfering not seeking another term in two years. Of note, Givens has a write-in campaign to keep his job.

Pullen said his decade as a county manager gives him the experience to handle the job from day one, while the public has been paying for Murdock’s four years of training.

Murdock ignored the dart and said he has been responsible for the management of the county on a daily basis. His predecessor was Bill Hansell of Athena, now state senator, who held the position for 32 years. Murdock, 76, said he does not intend to stay that long, but he would like a second term.

At one point he claimed to have served as chair of the county board for three years, but Givens held that role in 2017.

Ballots for the election will be mailed out Oct. 17 and must be returned by Nov. 6.