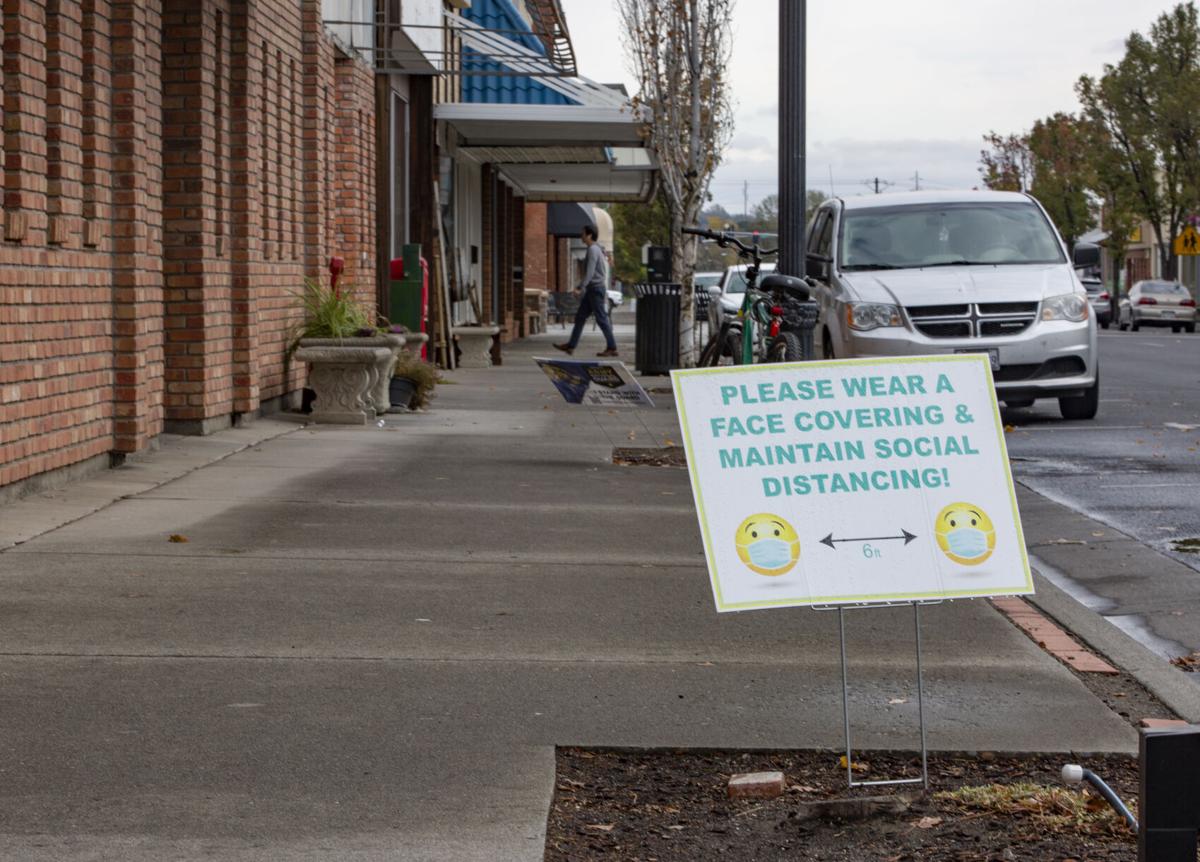 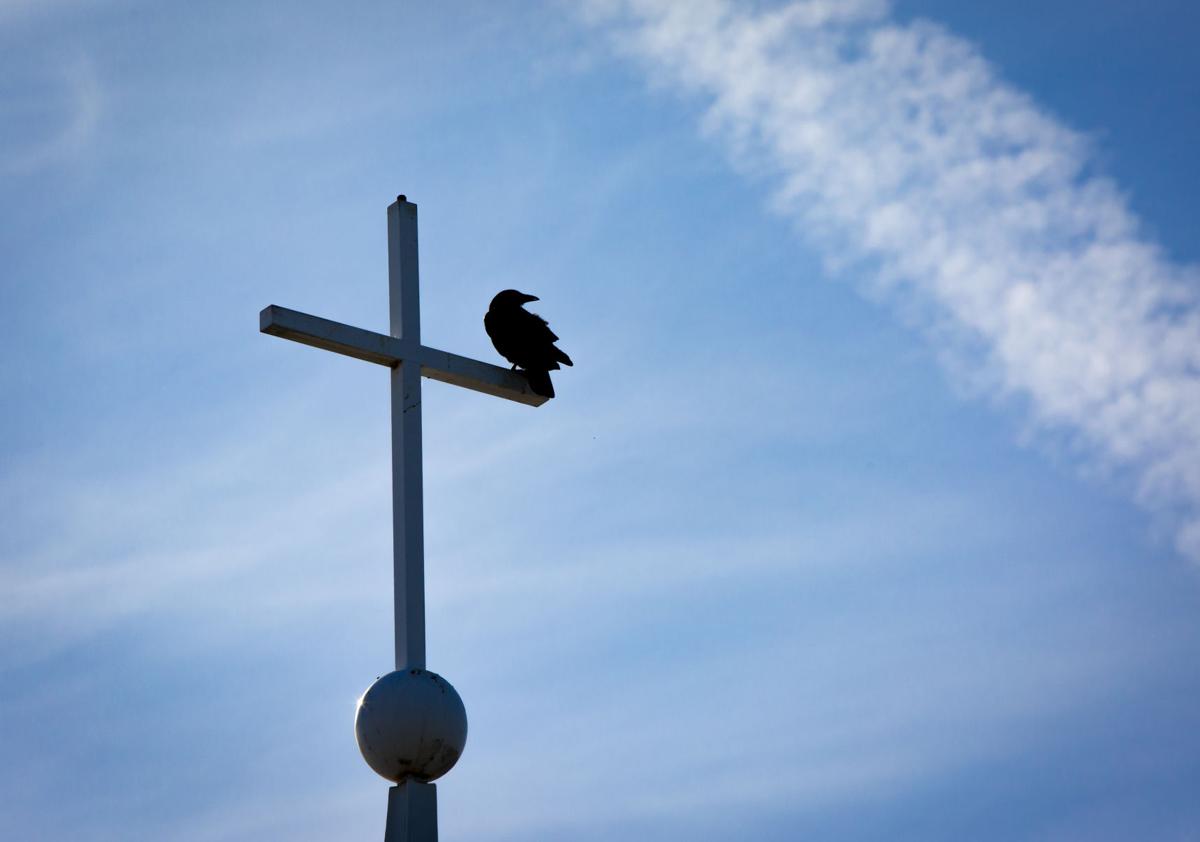 A bird rests atop the steeple at Gospel Home Church in Hermiston in June 2020. Under Gov. Kate Brown’s “two week freeze,” faith-based organizations will be limited to 25-person indoor or 50-person outdoor gatherings. 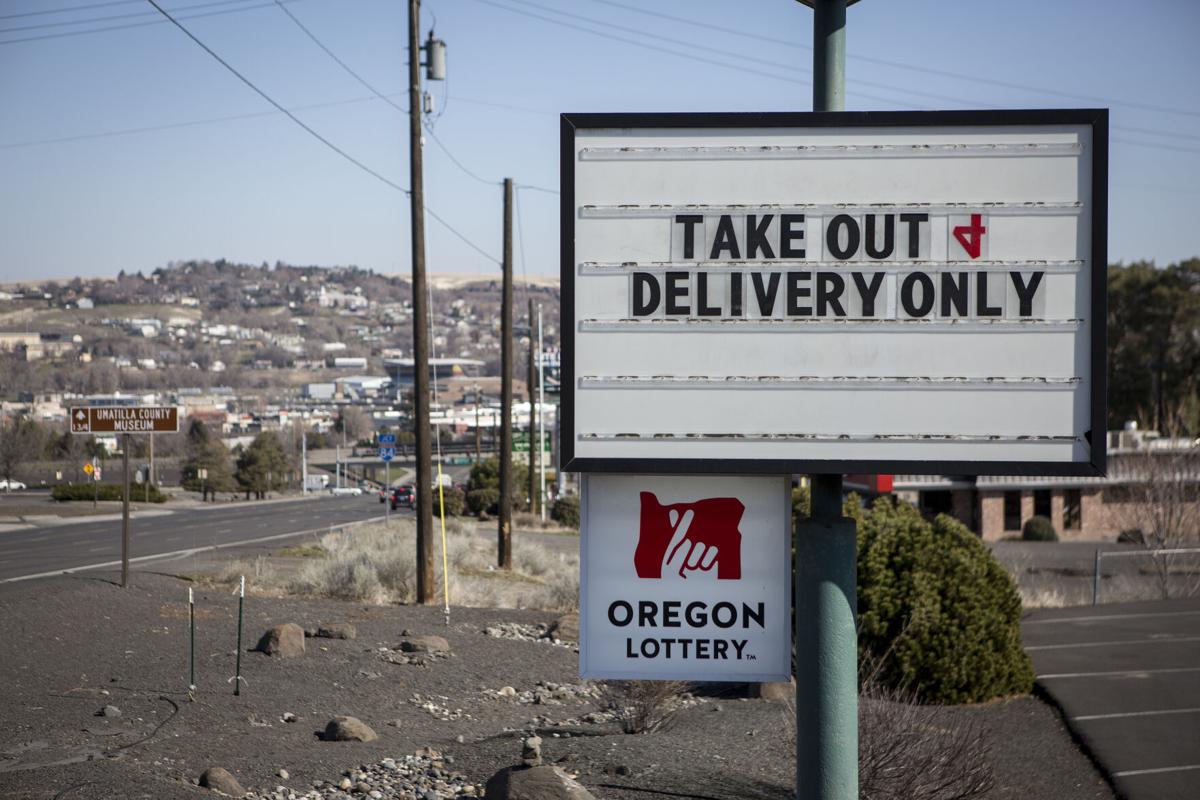 A sign along Southgate in Pendleton advertises takeout and delivery only following Gov. Kate Brown’s ban on dine-in restaurants in March 2020. Oregon is being put on a “two-week freeze” in an attempt to curb the rapid spread of COVID-19, Gov. Kate Brown announced at a press conference on Nov. 13, 2020.

A bird rests atop the steeple at Gospel Home Church in Hermiston in June 2020. Under Gov. Kate Brown’s “two week freeze,” faith-based organizations will be limited to 25-person indoor or 50-person outdoor gatherings.

A sign along Southgate in Pendleton advertises takeout and delivery only following Gov. Kate Brown’s ban on dine-in restaurants in March 2020. Oregon is being put on a “two-week freeze” in an attempt to curb the rapid spread of COVID-19, Gov. Kate Brown announced at a press conference on Nov. 13, 2020.

This week was déjà vu for Hermiston restaurants as they trotted out the same signs and Facebook posts they have used multiple times this year.

Due to COVID-19 restrictions, the notices state, the restaurant is returning to takeout only.

This time it’s not just Umatilla County being put in a timeout to curb rapidly rising COVID-19 cases. The entire state of Oregon is being put on a “two-week freeze” from Wednesday, Nov. 18, to Wednesday, Dec. 2. Gov. Kate Brown said some counties may be frozen longer if their cases are still going up at the end of the two weeks.

During that time, restaurants and bars must close their dining areas and offer delivery or takeout only.

Gyms and other fitness facilities, indoor and outdoor recreation facilities and event venues are closed entirely.

Grocery stores must limit capacity to 75% of the shoppers they are usually allowed. Churches and other faith-based organizations are limited to gatherings of 25 people indoors or 50 outdoors.

Everyone is asked to work from home to the greatest extent possible.

Luz Escalante, of Ixtapa Mexican Restaurant in Hermiston, said closing their dining area is hard on the business, but they will follow the rules and revert to takeout only.

The restaurant installed a drive-thru window in its building during the last shutdown, she said, so people don’t even have to get out of their car now when picking up the orders they phoned in.

Luckily, she said, the people of Hermiston have been generous and supportive to the restaurant during times of takeout only in the past, even if sales have dropped off some.

“Hopefully people continue to support our business,” she said. “It’s not only for our business, but also our employees and their families.”

Hair stylists and nail salon owners could breathe a sigh of relief that they weren’t included in this round of shutdowns. Shawn Massey, owner of Styling Arena and Gift Boutique in Hermiston, said they won’t have to cancel appointments this time around.

“We’re sending mass emails to our clients, to let them know we are still open, and that we’re doing things to be able to stay open and keep everyone healthy,” she said.

On the boutique side of the business, however, the shop is limited to 75% capacity. Massey said that restriction comes at a bad time, as retailers were just planning for Black Friday, Small Business Saturday and general holiday shopping. Still, she said she’s grateful they will still be able to have customers come in to shop.

“You just have to change everything,” she said. “Your holiday events have to go longer, and stretch them out, so fewer people are in the store at a time.”

She said usually they have an evening shopping party to kick off the holiday season, but this year customers should look out for deals spread out over several days so that not everyone is in the store at once.

Prior to the governor’s announcement of the two-week freeze, Umatilla County Public Health Director Joe Fiumara said on Nov. 12 that the local rise in cases has been directly linked to at least “five or six” large social gatherings of 30 or more, and at times 50 or more people, that were hosted around or after Halloween.

Fiumara said a significant portion of these cases have been diagnosed in young adults and teens — county data showed nearly 55% of the county’s total cases have been among people 39 or younger as of Nov. 13 — and the health department is pleading with parents and the community to prevent these gatherings from happening.

“Parents: please help prevent the spread of COVID-19 by ensuring that your teen is not out partying,” an email sent by the health department to parents with students in the Pendleton School District stated this week. “We are aware of one or more large parties planned in our area for the upcoming weekend. Please ensure that your teen is not in attendance.”

Fiumara said those attending the parties have also been unwilling to share information with the health department during contact tracing and it’s hindering the local response.

In one instance, Fiumara said an entire household was diagnosed with the virus and had recently attended a birthday party of at least 25 people but wouldn’t share information about other attendees who may have been exposed.

“We have many instances of items like that happening, which make it confusing for us to know how many of these are the same party or how many are different,” he said.

State Epidemiologist Dean Sidelinger said Nov. 13 that the vast majority of cases statewide have also been linked to social gatherings, and the state has directed counties to prioritize contact tracing for the most at-risk individuals when necessary due to the difficulty in tracking cases associated with them.

Younger individuals are generally more healthy and less likely to be hospitalized or suffer severe symptoms of COVID-19, but Fiumara said there’s still risk of spreading to other more at-risk individuals and the numbers will continue to keep schools and businesses under restrictions.

As the entire state enters another period of lockdowns trying to slow the virus’s spread, Fiumara said it’s “disheartening and frustrating” to have their local efforts impacted by those who continue to flout the guidelines in place to protect the community.

“We get it, people hate some of these restrictions,” he said. “But man, this is like the worst thing we could be doing.”