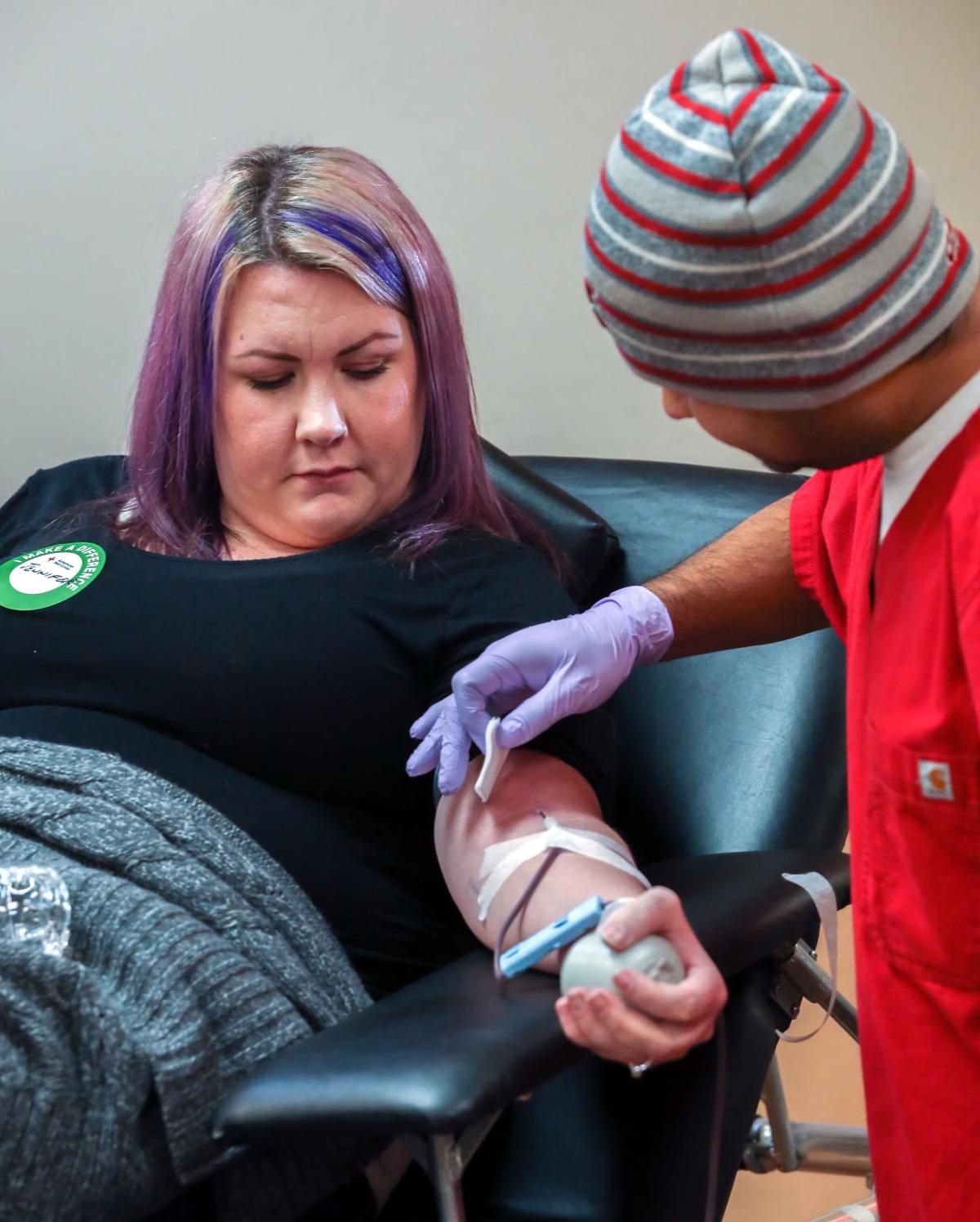 Jennifer Fullerton of Umatilla watches as phlebotomist Victor Reyna, of the Red Cross, tends to her during a blood drive on Jan. 7, 2019, in the basement of the Hermiston Public Library. 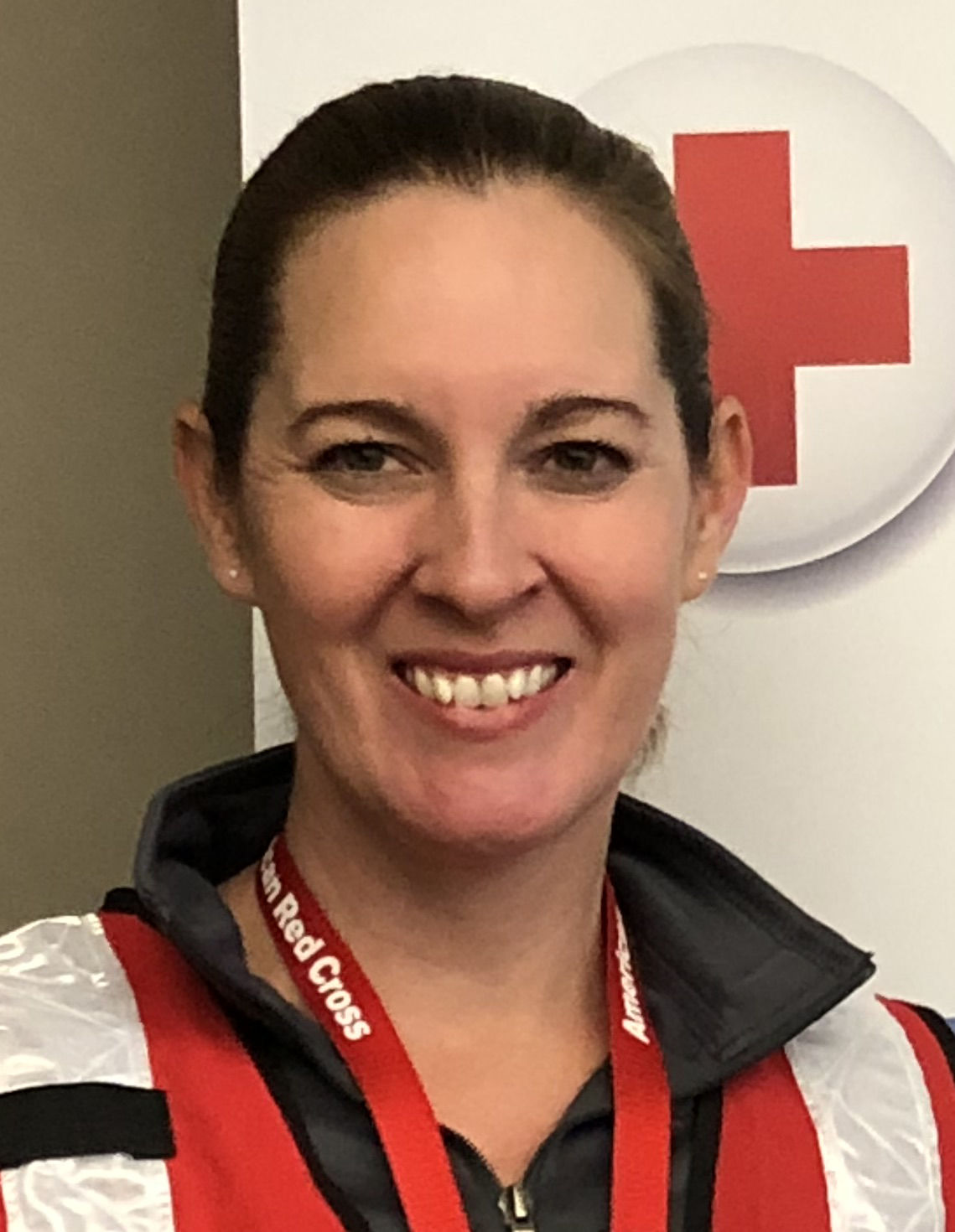 Nadine McCrindle hasn’t been with the American Red Cross for very long, but she’s already facing a challenge.

The new executive director of the Red Cross region in Central and Eastern Oregon is in need of disaster response volunteers in Northeast Oregon.

“The people that we have that are specifically involved in these types of disaster responses, are really, really special human beings,” she said. “On a larger scale, they are often the same people that will be deployed to natural disasters that happen across the country, like hurricanes, wildfires, those types of things. And when you meet them all in a large group, there’s a specific type of person that does this type of volunteer work, and yeah, it’s really special.”

McCrindle, who joined the Red Cross in October, knows what being a volunteer is about. Just one month after being hired as executive director, she was deployed to the Kincade Fire, burning north of San Francisco. The Kincade Fire forced about 190,000 evacuations and the Red Cross Cascade Region supported 10% of the residents, helping them relocate to the 15 shelters that were set up. McCrindle was deployed to Sonoma County for 10 days and served as a relief for the local Sonoma responders who needed rest, and gave them time to check on their own families and homes.

“I think one of the biggest things that really touched my heart that was there was the compassion and resiliency of the people who were affected by the fire,” McCrindle told KTVZ in Bend after her deployment.

It’s that compassion and resiliency that McCrindle and Kristen Heath, the disaster program manager, are looking for in the volunteers they recruit in rural Oregon.

“We send out volunteers to help those families on really the worst day of their life, and try to assist them with their immediate needs until some of the other community organizations have time to catch up and get going to assist them,” Heath said. “That’s the biggest thing that we’re doing on a day-to-day basis. We also do smoke-detector installations, and so we’re as much as possible getting out there to the neighborhoods that need us, and get in there and help people test or install new smoke alarms as needed, because that’s what saves lives.”

Disaster Action Team volunteers arrive immediately after a home fire or other disaster to provide compassionate care and comfort. They distribute relief supplies, and provide client assistance for temporary lodging and other disaster-caused needs. DAT volunteers then can help victims get in touch with another group of Red Cross volunteers who make up an emotional care team who are able to offer some health services, mental health services and spiritual care.

“When you see people facing the worst days of their life, and you see the humanity that comes from people, complete strangers, wanting to help you or the community, it restores your faith in humanity, and there’s nothing that makes your heart fuller than seeing that,” McCrindle said. “And that has been my experience since I joined the Red Cross, is being with people like that.”

Heath said an increase in the number of incidents requiring Red Cross response has put a strain on the limited resources available. Since July 2019, Red Cross has responded to seven fires in Morrow County, above the four to five it usually responds to in a year. That number goes up to 19 responses in Umatilla County since July 2019. The average for an entire year in the county, Heath said, is 16.

“We would love to hear about every fire. A lot of times, people have family nearby that’s going to take them in and help them out and stuff like that and that’s great,” Heath said. “It is so much better to be with loved ones in a disaster, then have to be on your own in a hotel. But we do have those other teams — our health services team, our mental health team — that can assist, too. So even if you’ve got a place to stay that night, a call can make some of those other resources available to you.”

McCrindle said volunteers go through a background check and extensive training to help them feel comfortable with situations before they are sent out to help families facing tragedy.

“We give them all of the training that they need to be able to perform the task that is required in terms of a disaster response,” she said. “And then they’ll go out on a few calls with (other volunteers). We don’t just train them, and then you’re sent off, ‘Good luck.’”

Heath said there are some key skills volunteers should have to better equip them to deal with disaster response situations.

“Having that compassion, having the ability to sit down and have those conversations, active listening skills, those are really important for the DAT responders,” she said.

The Red Cross of Central and Eastern Oregon has several volunteer opportunities for residents in Umatilla and Morrow counties, including:

• Providing food, shelter and comfort for those affected by a disaster, including home fires.

• Assisting members of the military and their families.

To volunteer or find out more, visit the Red Cross website at www.redcross.org/local/oregon.