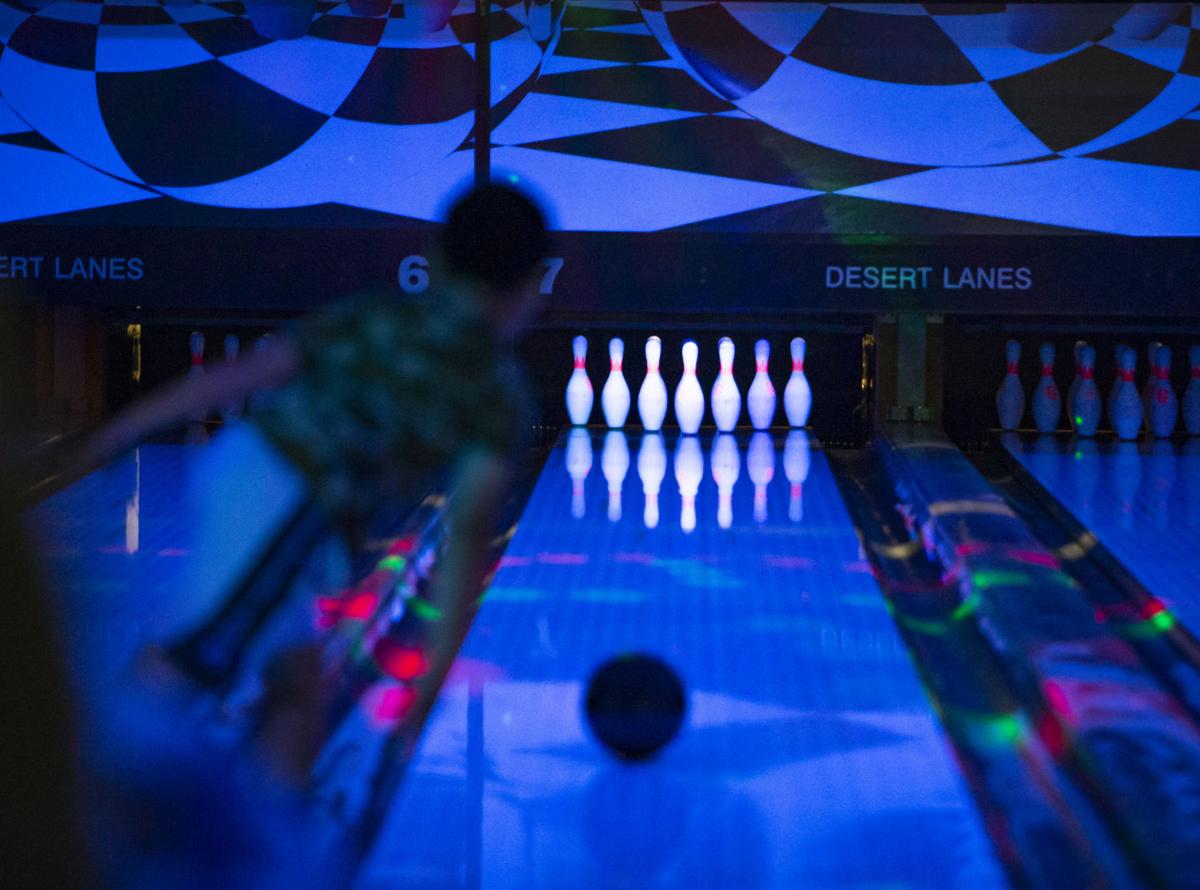 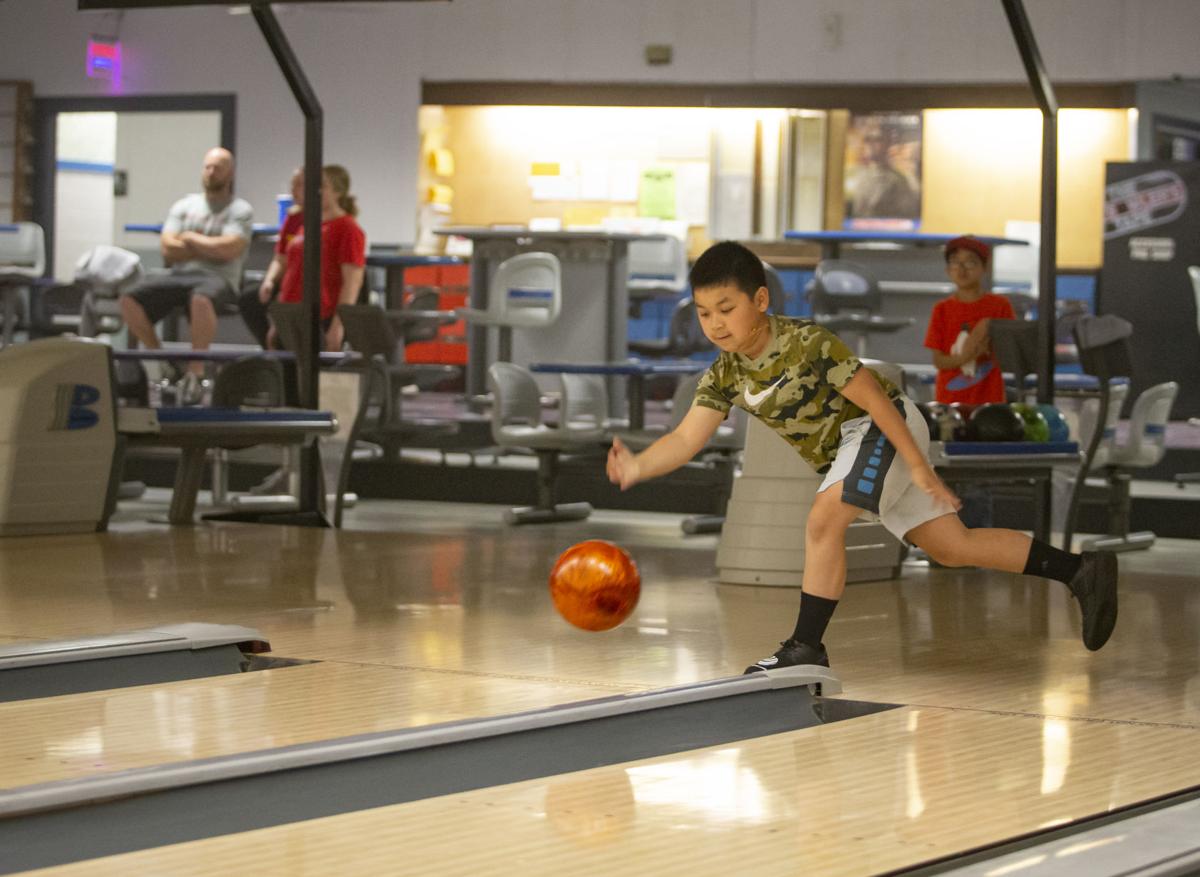 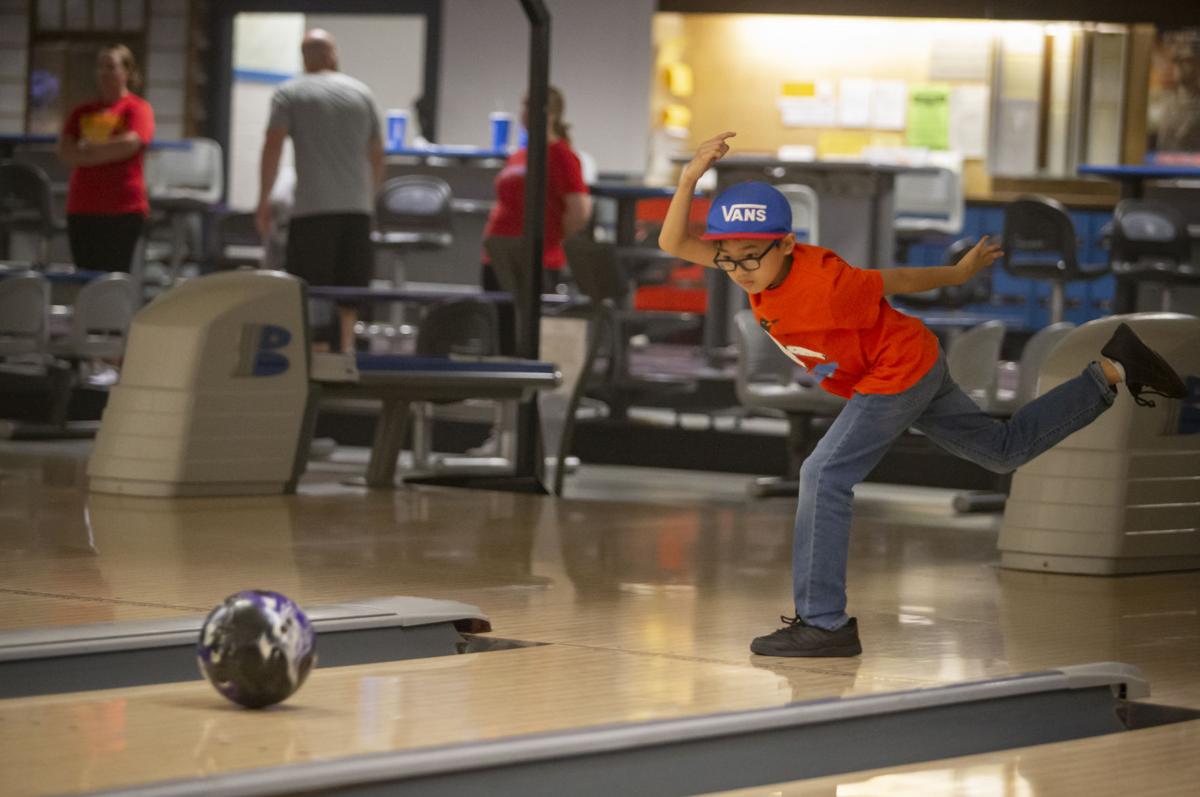 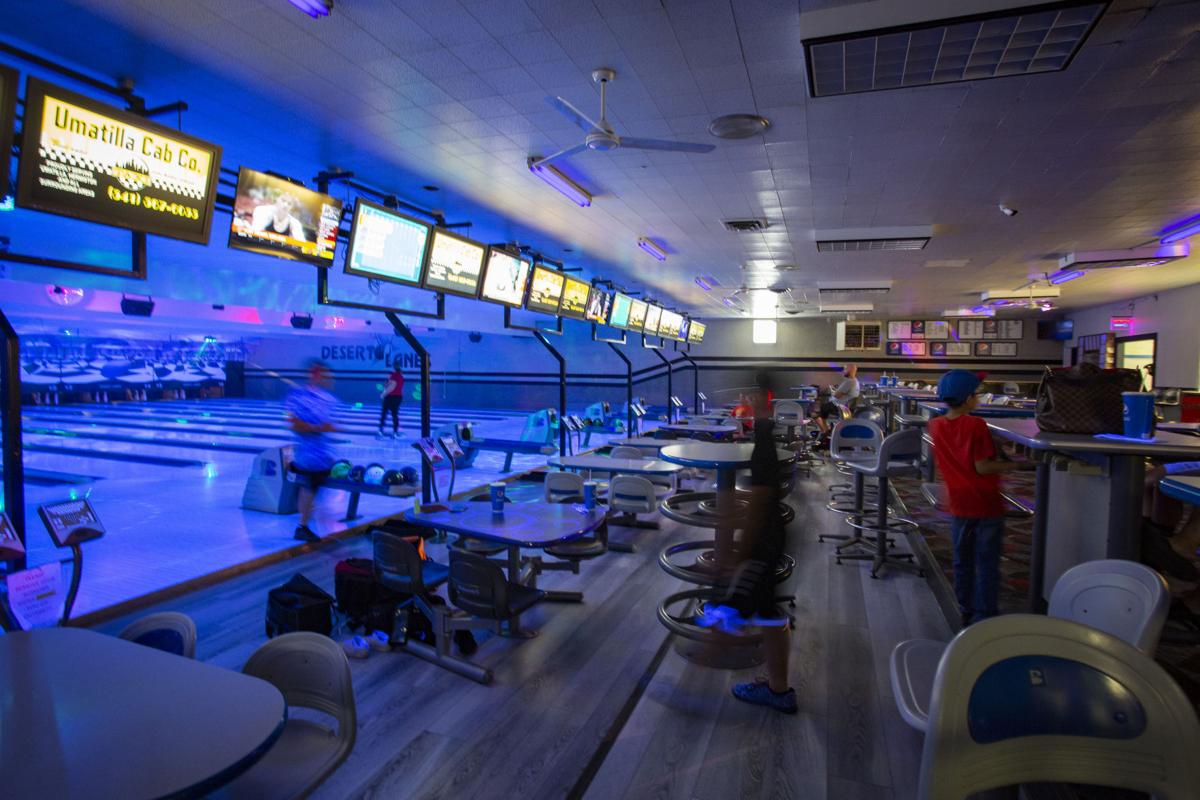 People bowl at Desert Lanes Family Fun Center in Hermiston on Monday, June 8, 2020. The bowling alley is only using alternate lanes and having customers make reservations ahead of time. 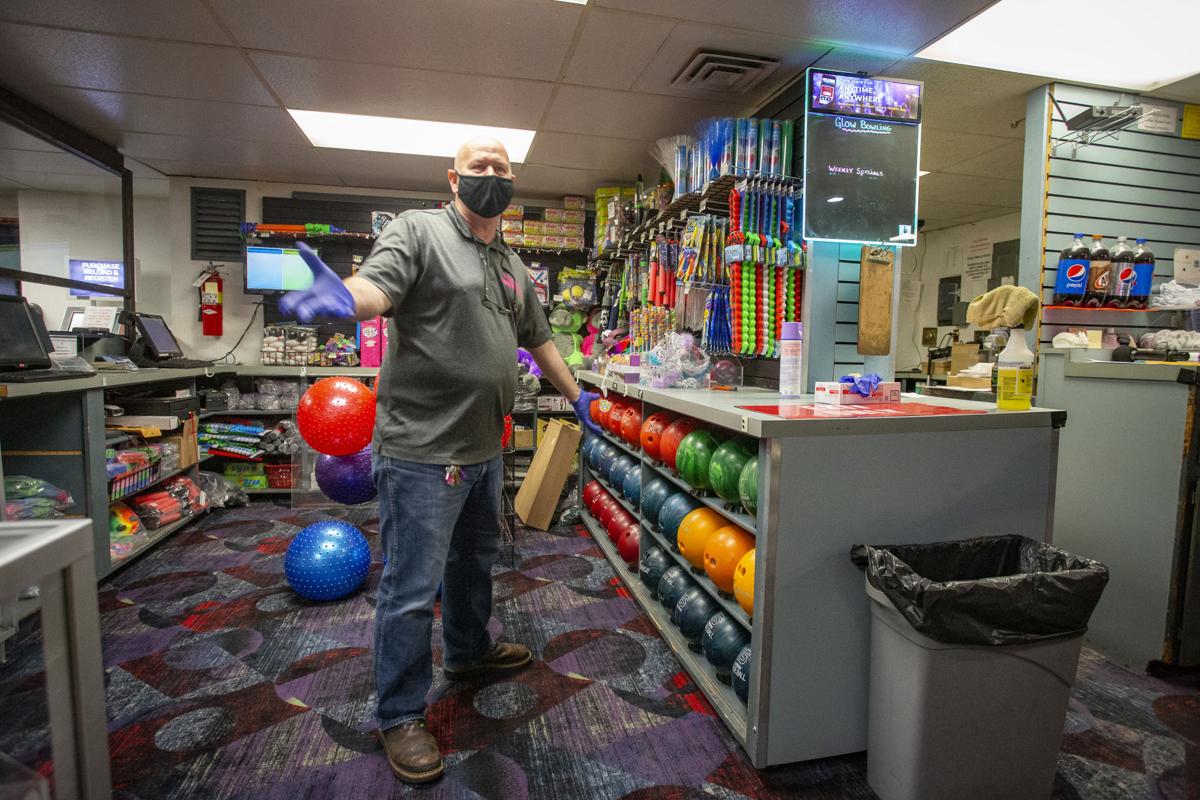 Ray Fields, manager of the Desert Lanes Family Fun Center in Hermiston, shows where customers will have to check out bowling balls on Monday, June 8, 2020. 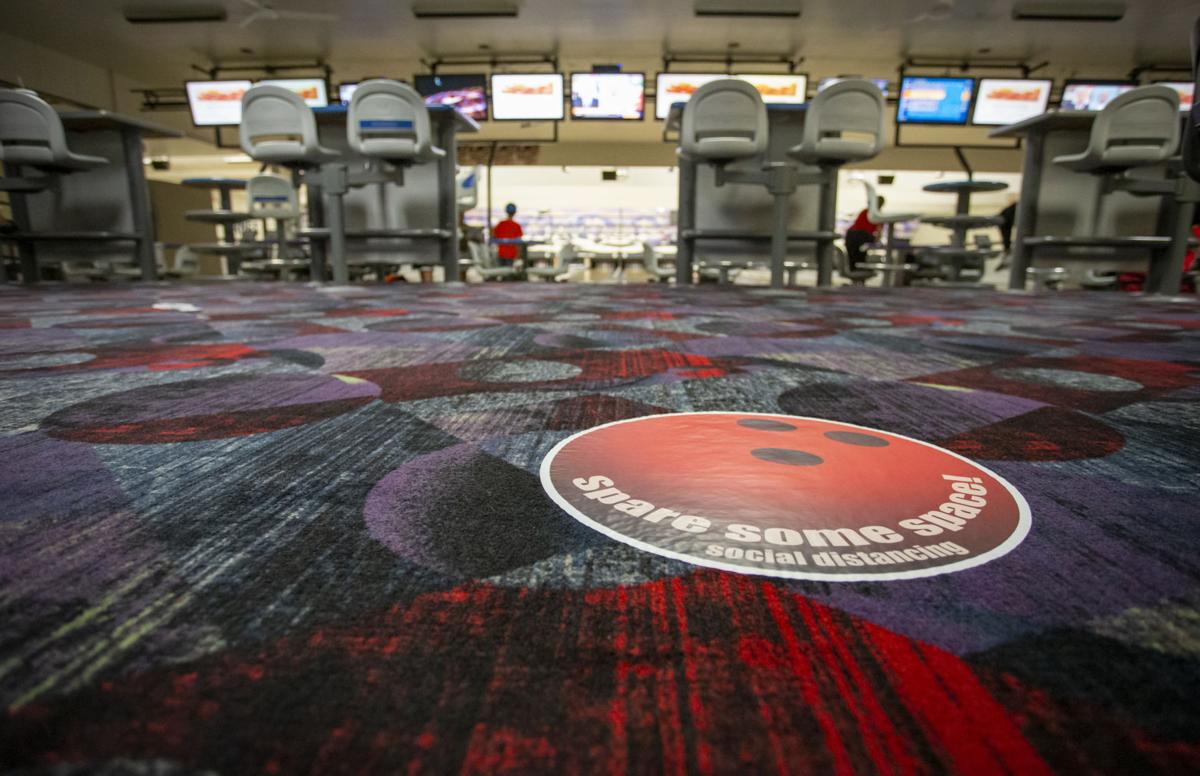 A floor decal shaped like a bowling advises customers to “spare some space” at Desert Lanes Family Fun Center in Hermiston on Monday, June 8, 2020. 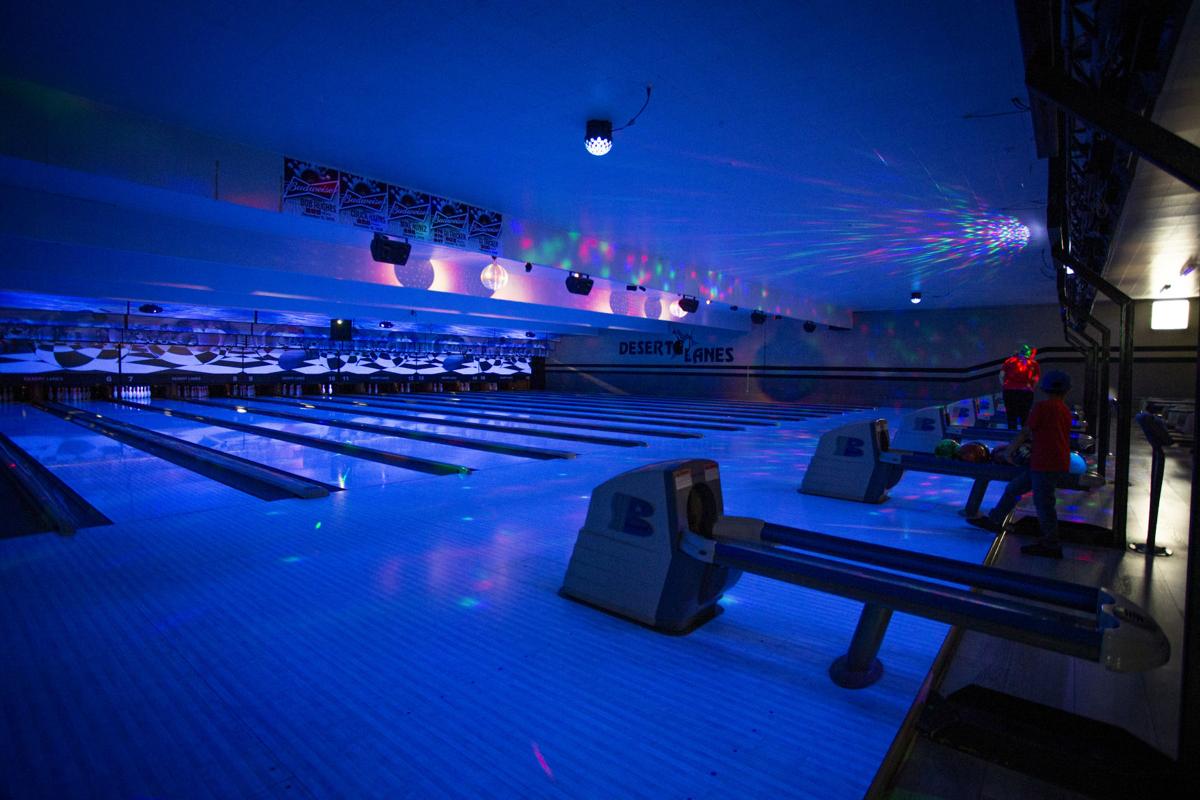 Desert Lanes Family Fun Center invested in upgraded lighting for their bowling alley during their closure.

People bowl at Desert Lanes Family Fun Center in Hermiston on Monday, June 8, 2020. The bowling alley is only using alternate lanes and having customers make reservations ahead of time.

Ray Fields, manager of the Desert Lanes Family Fun Center in Hermiston, shows where customers will have to check out bowling balls on Monday, June 8, 2020.

A floor decal shaped like a bowling advises customers to “spare some space” at Desert Lanes Family Fun Center in Hermiston on Monday, June 8, 2020.

Desert Lanes Family Fun Center invested in upgraded lighting for their bowling alley during their closure.

First it was haircuts, and now comes bowling.

Umatilla County continues to see more businesses reopen after the county moved to Phase 2 of the state’s multi-step plan for reopening the economy during the COVID-19 pandemic.

Morrow County and 13 other counties were approved for Phase 2 on Friday, June 5. After the state initially asked for more information, Umatilla County joined that group the next day. The phase allows for gatherings of up to 50 indoors and 100 outdoors, and adds more establishments to the list approved for reopening.

On Monday, staff at the Desert Lanes Family Fun Center in Hermiston were excited to offer bowling and arcade games for the first time since March.

“Just like every other business, we’re happy to be reopened and moving forward now,” manager Ray Fields said.

Returning customers will notice changes when they walk in the door. The new lighting, tables and renovated concessions/bar space are improvements just for the sake of making the center nicer. Other changes, such as sneeze guards over the counter and every other table in the concessions area being taped off, are following guidelines to prevent the spread of COVID-19.

Staff all wear masks now, and have their temperature checked when they arrive at the door. Four additional employees now work each shift, including a “porter” whose job is to wipe down an arcade machine each time someone is done using it. Customers are spaced out on every other lane, with odd lanes going dark some days and even-numbered lanes dark the next day.

Bowling balls are now behind the counter, where a customer must check out one at a time. Balls and shoes are sanitized inside and out after being returned.

“I don’t know if it makes people feel safer, but we want to show that at least we’re being proactive about their safety,” Fields said of the changes.

To accommodate those changes, including time to thoroughly clean each area after a group leaves, the bowling center has switched from having customers walk in and pay per game to requiring people to reserve a lane for an hourlong block. They can play as many games in that block as they would like, and Fields said some people are reserving lanes for three or four hours at a time. He recommended calling at least 24 hours in advance to make sure there was a lane available at the desired time, particularly with only half the lanes being used at once.

“We’re getting a lot of calls from the Tri-Cities,” he said. “I think we’re seeing some of what the golf courses saw.”

Recreation centers aren’t the only places opening back up. On June 7, Hermiston Church of the Nazarene had in-person services for the first time since the second Sunday in March.

Pastor Eric Fritz said they split the congregation into two, asking people to register on the church’s website to attend the 8:30 a.m. and 10:30 a.m. time slots to help keep people spread out in the pews and give time for cleaning in between services.

Fritz said about 70% of their usual attendees were there in person, with others watching the livestream online.

“There was a feeling of celebration, and they stayed and talked forever outside after we kicked them out,” he said. “Everyone seemed excited to be back together.”

He said the pandemic has made his job the busiest it has ever been the past few months, as he has reached out to each member of the congregation individually instead of being able to catch up with people during Sunday services.

“It’s taken so much work to make phone calls, to be on social media, because everyone does things differently, so trying to get the word out has been challenging,” he said.

The church collected diapers at its yearly “diaper dash” earlier in the year for parents who need them, but since its office remains closed for now, Fritz said people can get them from TruCare Pregnancy Clinic, Made to Thrive or Head Start.

Libraries are among institutions that faced closures and layoffs as a result of the pandemic, and as counties begin to enter Phase 2 of reopening plans, Hermiston Public Library Director Mark Rose said they don’t have a reopening time scheduled for libraries at this point in time.

“We are going to continue as a curbside pickup for now, and I’m looking forward to having people back in the building, but I also want to make sure we have all the pieces in place,” Rose said.

The city’s parks and recreation department, which saw many of its facilities closed this year, is allowed to open some things back up under Phase 2, including the Hermiston Family Aquatic Center.

Director Larry Fetter said many of their lifeguards they recruited in the spring have since taken other jobs, so by the time the recruit and train sufficient staff, it will probably be about June 24 before they open the aquatic center.

Like everything else, it will look different this year. Groups of up to 10 people will be able to reserve an hour and a half chunk of time at the pool, with cleanings between sessions. In the mornings each group that arrives together will be given a zone of the pool that they must stay in, keeping everyone far apart. In the afternoons, groups will be allowed to roam around more, but must stay more than 6 feet apart from anyone not wearing a wristband of the same color as the rest of their party.

In the beginning, only the competitive pool will be open, and the multi-use pool with water slides will be off-limits. Fetter said as they get a handle on things, other areas of the pool, along with swimming lessons, will be added.

Concessions will be closed, but staff are relaxing rules on what food and drink can be brought from home.

“We will not be opening the locker rooms because of the volume of cleaning that would be required,” Fetter said, noting that two individual changing rooms with toilets will be available for restroom use.

Some businesses allowed to reopen under Phase 1 are still working on reopening under their new rules. The Union Club, a coffee by day, bar by night establishment, is set for a grand reopening on Friday, June 12, with live music, a DJ, dinner and dancing to celebrate their relaunch.