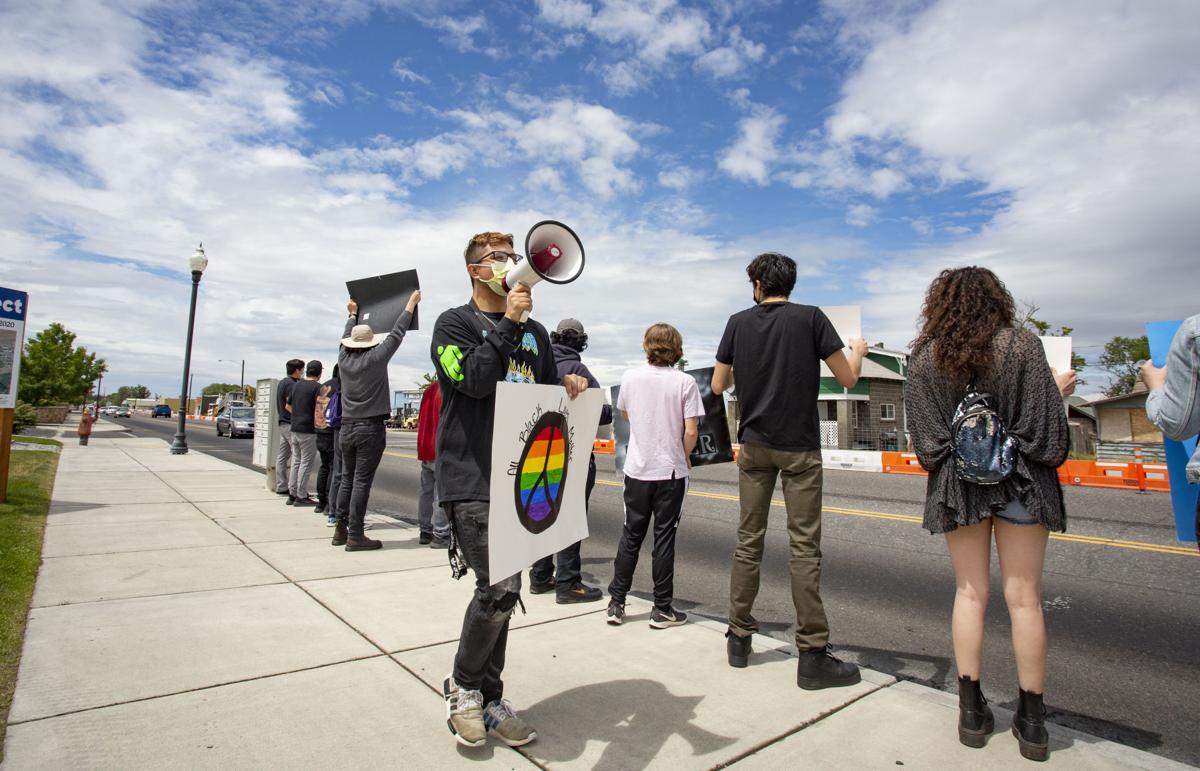 Alex Norris leads chants during a protest against police brutality and racial injustice in Umatilla on Tuesday, June 9, 2020. 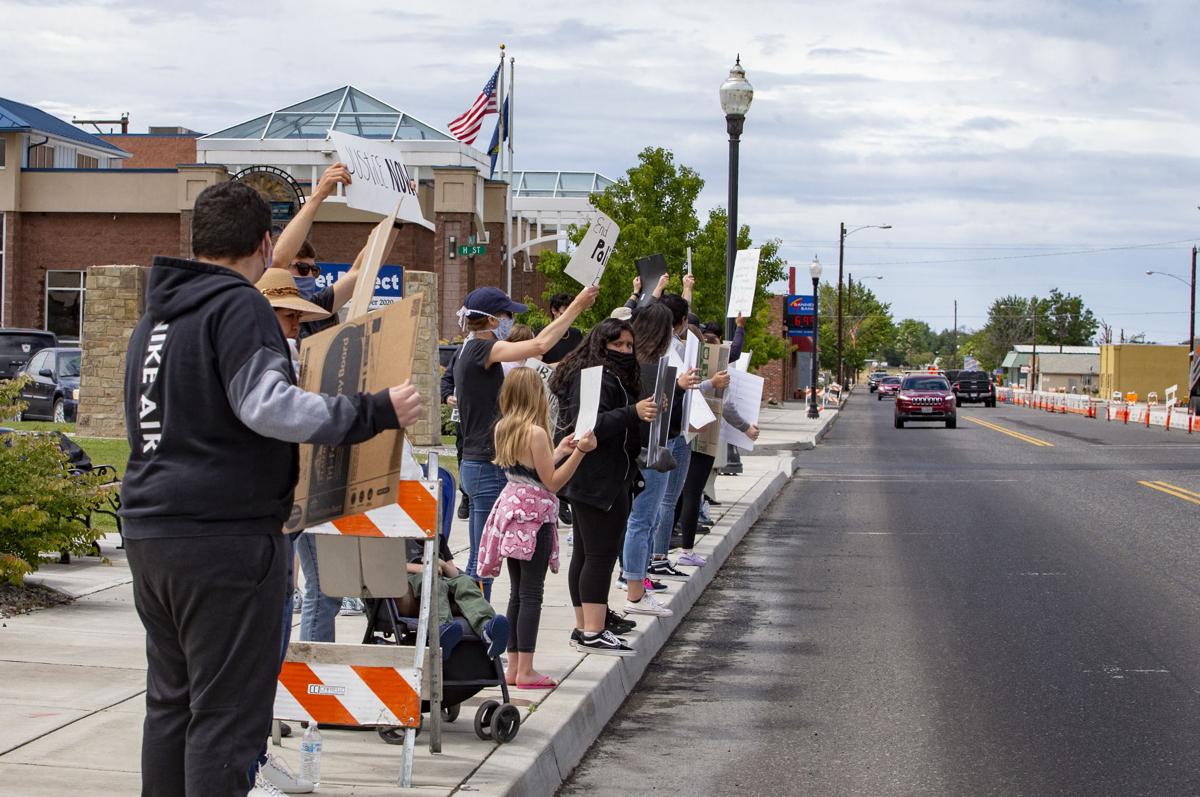 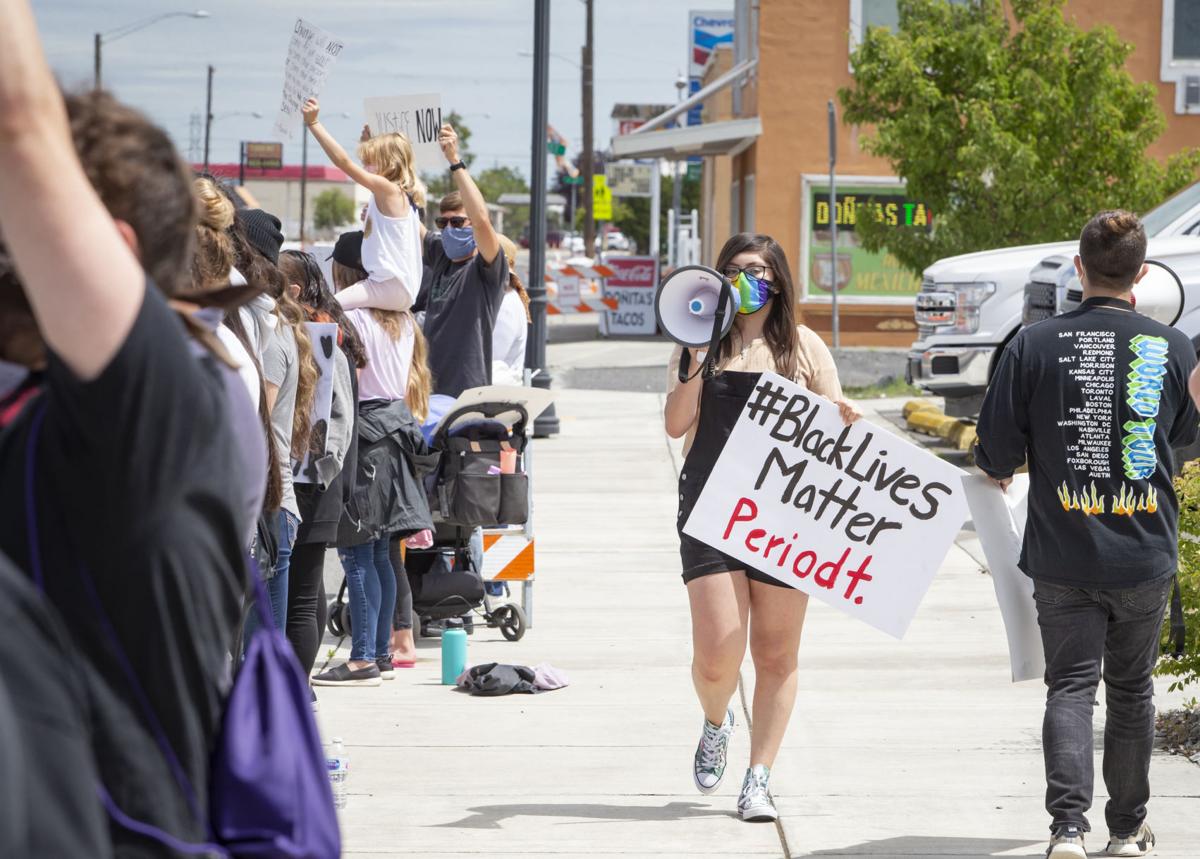 Elizabeth Loera leads a chant with a megaphone during a protest against racial injustice and police brutality at Village Square Park in Umatilla on Tuesday, June 9, 2020.

Alex Norris leads chants during a protest against police brutality and racial injustice in Umatilla on Tuesday, June 9, 2020.

Elizabeth Loera leads a chant with a megaphone during a protest against racial injustice and police brutality at Village Square Park in Umatilla on Tuesday, June 9, 2020.

More than 30 protesters took to Village Square Park in Umatilla on Tuesday, June 9, to protest racial injustice and police brutality. Protesters chanted and carried signs in support of police reform and the Black Lives Matter movement for about an hour at the roadside followed by speeches in the park.

Soledad Estrada, of Umatilla, took the day off from work to come and join protesters. Estrada said she had attended protests in Hermiston over the last week and felt it was important to have her voice heard in her own town.

“A lot of people didn’t think our small towns would do this, so I’m excited that Hermiston did it and now Umatilla is doing it,” she said. “I’m excited that we have people who do care.”

Estrada said she felt driven to protest to protect her three young sons from racial injustice and police brutality in the future.

“Every time I hear about something like this happening it just hits close to home because my sons are Black,” said Estrada of the murder of George Floyd. “They’re going to grow up to be big and they might scare someone and get the cops called on them.”

Estrada said she felt it was important to speak up so that her sons could have a voice and to establish a dialogue between police and protesters. Estrada said she was pulled over in Umatilla on Monday night, June 8, for a broken taillight and felt as though the officer was afraid to approach the car when he saw that her boyfriend was Black.

“It shouldn’t be like that, we’re all people and we weren’t doing anything wrong,” she said. “It’s sad that they get intimidated just by the color of your skin.”

Estrada added that she didn’t think the officer was racist and was more a result of the recent backlash against police in general. Estrada said she has always had a pretty good relationship with the police in Umatilla, but felt as though it was a dialogue that needed to be started.

Among those organizing the protest was 17-year-old Umatilla High School student Alex Norris. Norris said he was inspired to act after seeing similar protests in Hermiston during the last week.

“I saw that there was one in Hermiston and I thought well, if Hermiston can do it, we can too,” he said. “We have a strong and great community here in Umatilla.”

Norris drew on his own experience as a member of the LGBTQ community and the criticism he has faced from people to motivate his support of the Black Lives Matter movement.

“I’m part of the LGBT community and I’ve been criticized before because of who I am,” said Norris. “I can’t say I know exactly what they’re going through, but I have something similar I can compare it to.”

Norris said recent events with the killing of George Floyd, Breonna Taylor and widespread protests inspired him to help spearhead protests in Umatilla.

University of Oregon student Elizabeth Loera helped Norris organize the June 9 protest. Loera, who grew up in Umatilla, said she wanted to bring a voice to the people of Umatilla without having to go to larger cities.

“I thought Umatilla is a really small town and we haven’t seen any change or protests going on here,” Loera said.

Loera said she thought that people in Umatilla needed to know they had support and that the Black Lives Matter movement wasn’t limited to big cities adding that protesting at the local level can often see real change.

“It’s important to start here locally so that we can see actual change,” Loera said. “I think choosing to protest is my way of doing something about what’s going on.”

Loera was among several speakers at the event and spent much of the first hour parading the sidewalk with a megaphone leading chants alongside Norris.

“Being able to protest, you can come together and create change,” Loera said. “We can demonstrate to the community driving by what we believe in and that we are here for our Black brothers and sisters.”

Both Loera and Norris said that turnout was better than expected and they intend to continue protesting and are working to organize additional protests in the future.

“There’s change coming, it’s an uprising,” said Loera. “I’m looking forward to this generation and the momentum that we’re building.”

Hermiston organizers had planned the city's third Black Lives Matter protest for Saturday, June 13, but postponed the event due to high winds that would make it difficult to hold up signs. The protest will instead be held on Saturday, June 20 starting at noon on the corner of Highway 395 and Elm Avenue.