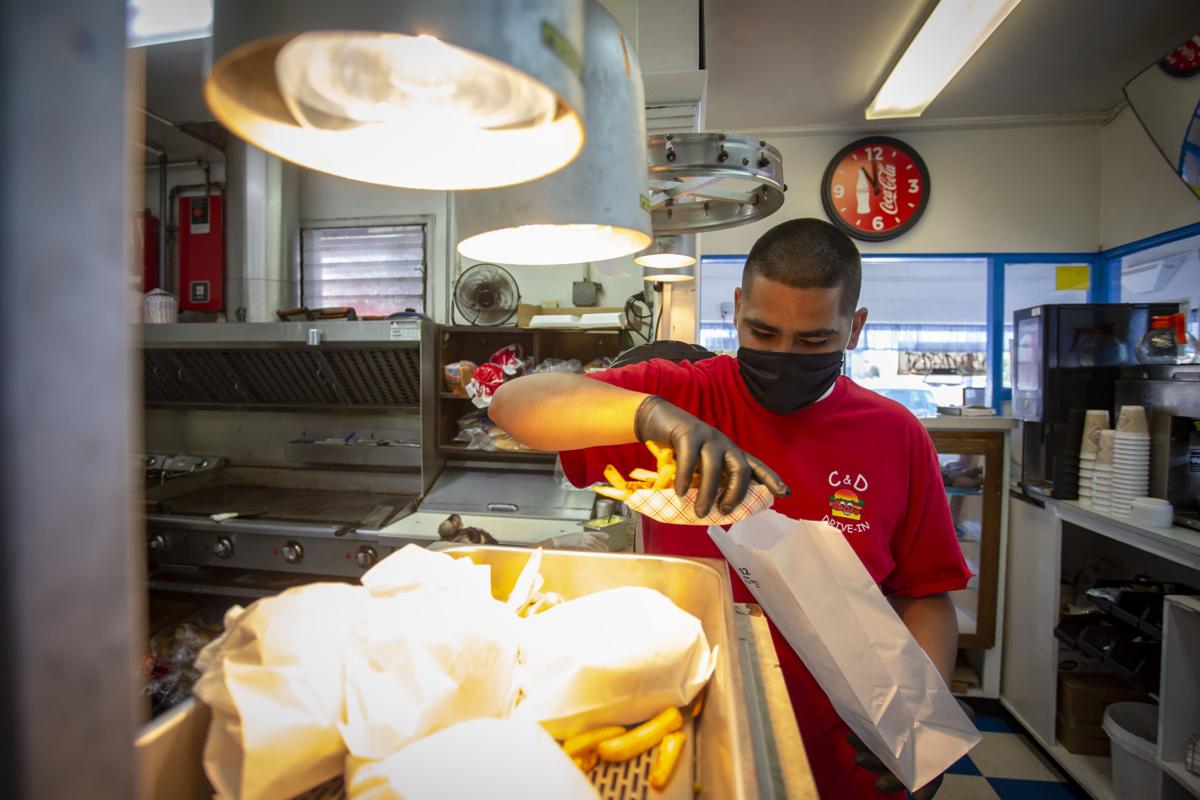 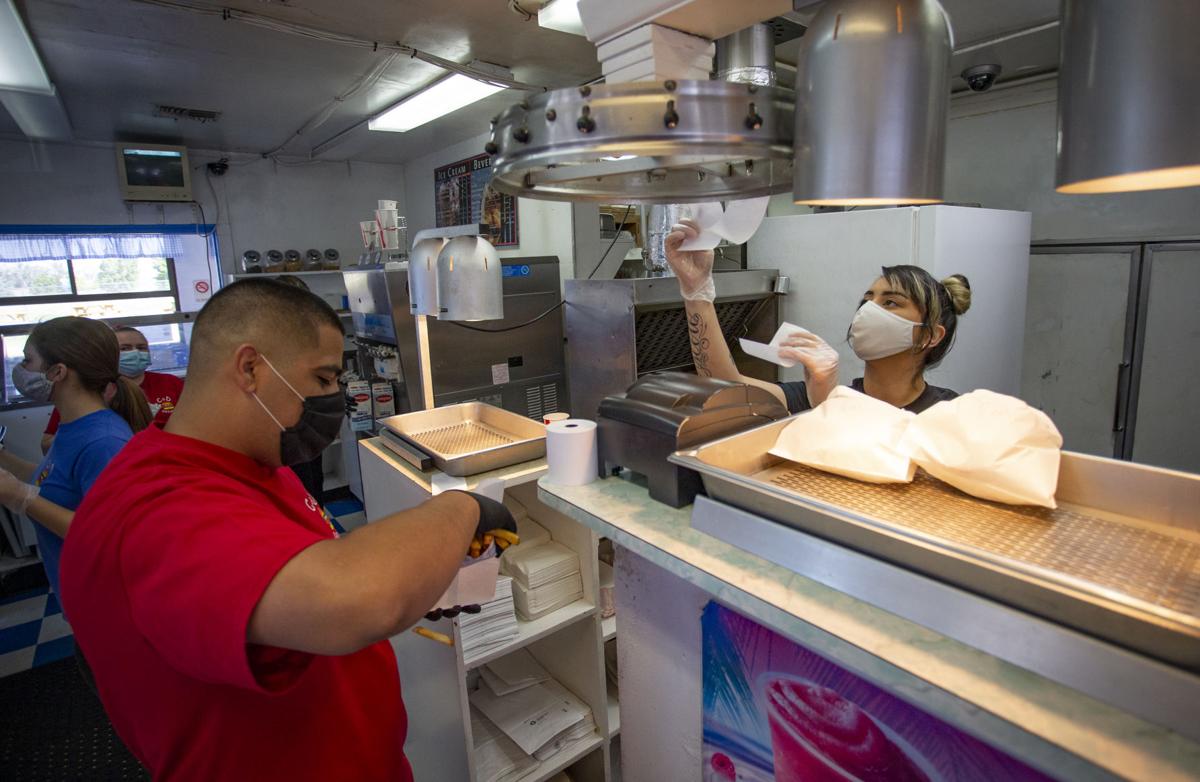 Felipe Olvera, left, bags orders as Emily Robles checks for the next order at C&D Drive-In in Boardman on Tuesday, July 14, 2020. 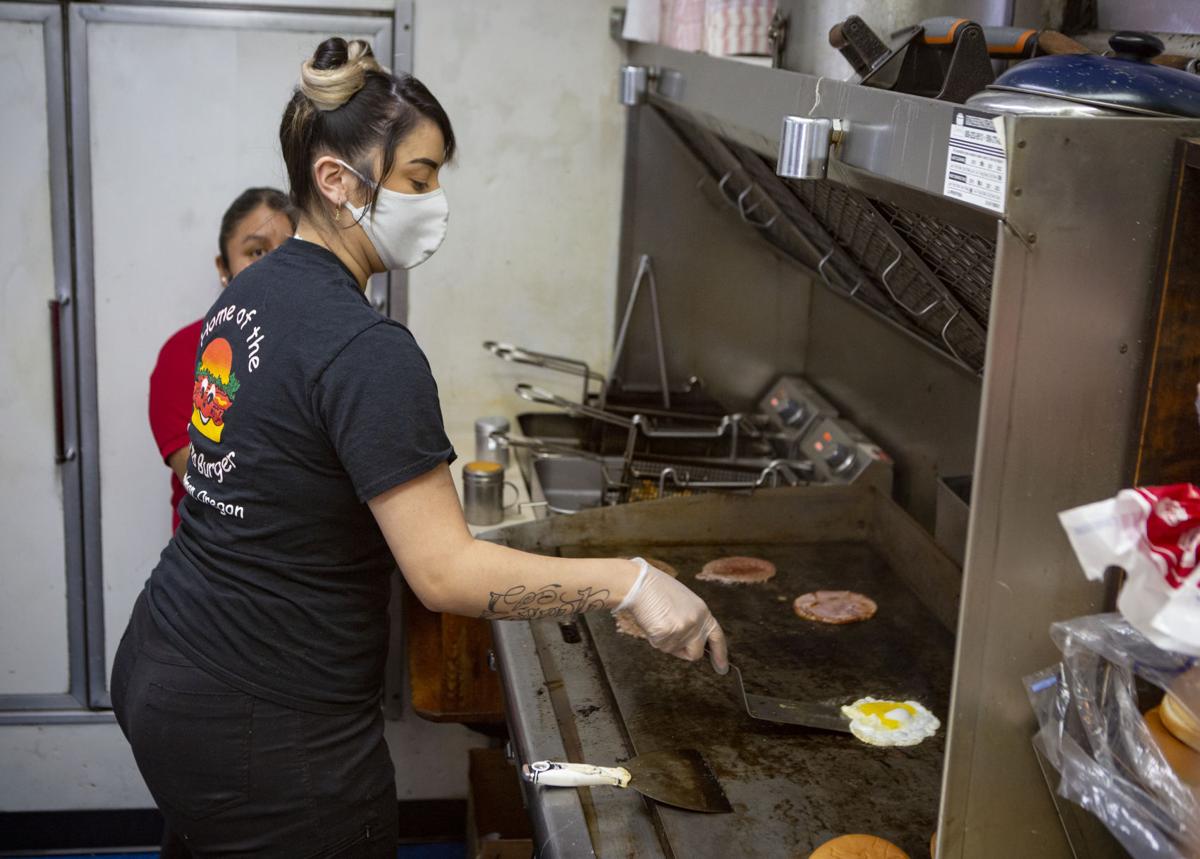 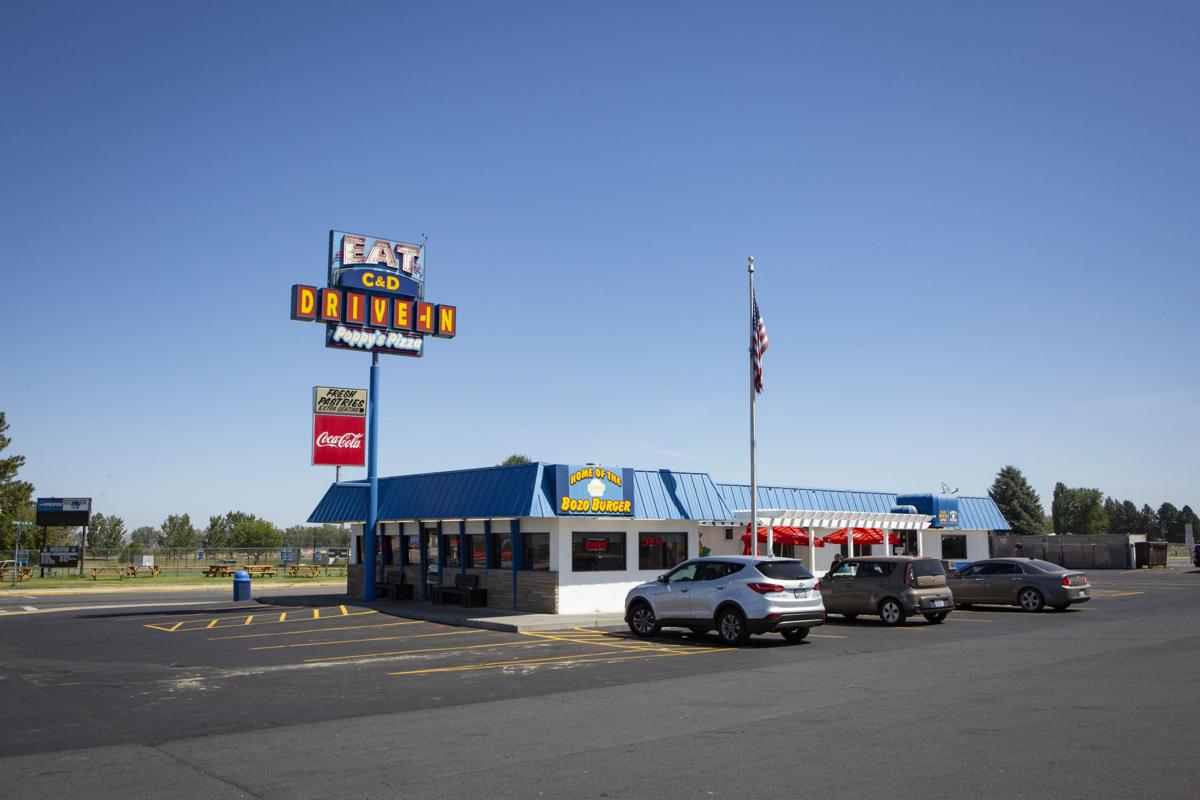 The C&D Drive-In in Boardman is one of several businesses in the region to have received a Paycheck Protection Program loan.

Felipe Olvera, left, bags orders as Emily Robles checks for the next order at C&D Drive-In in Boardman on Tuesday, July 14, 2020.

The C&D Drive-In in Boardman is one of several businesses in the region to have received a Paycheck Protection Program loan.

As the federal government releases more information about the Paycheck Protection Program, the stimulus money for businesses affected by COVID-19 is being credited with helping save thousands of jobs in Eastern Oregon.

Jennifer Leighton, owner of C&D Drive-In in Boardman, said the money the business got from the PPP helped prevent her from needing to lay off workers or cut hours to make up for reduced revenue when the diner had to go to take-out only in the early days of the pandemic.

On July 6, after several media companies filed lawsuits for information on where the PPP money was going, the Small Business Administration released the names of all businesses that had received loans of more than $150,000. The nonprofit news organization ProPublica organized the information into a searchable database available to the public.

According to that database, there were 65 companies with headquarters in the Hermiston ZIP code that received at least $150,000 from the Paycheck Protection Program. That list does not include companies that have sites in Hermiston but are headquartered somewhere else, such as the Hermiston Herald’s parent company EO Media Group, which received a PPP loan to temporarily reverse the 10% pay cut all employees were given in March due to lost advertising revenue from COVID-19.

Some of the entries for the 65 companies in Hermiston’s ZIP code did not list the numbers of jobs preserved by the loan, but those that did self-report a number added up to 1,574 jobs protected during the 60-day period of the loan.

Four companies headquartered in the Umatilla ZIP code received loans of more than $150,000, adding up to 102 jobs that those companies reported they retained.

Boardman’s ZIP code turned up nine results, adding up to 293 jobs that the companies reported retaining. Companies and nonprofits in south Morrow County, including Morrow County Grain Growers in Lexington and Morrow County Health District in Heppner, added up to another 408 jobs.

The C&D Drive-In, like many restaurants, didn’t show up on the list because it had borrowed under $150,000. Leighton said she was pleasantly surprised by how easy it had been to apply for the money during the first round authorized by Congress.

“I filled out the paperwork on a Thursday or Friday, and by Monday the funds were already deposited in our account,” she said.

The real test, she said, will be whether it is as easy to get the loan forgiven. If businesses follow the rules for the PPP loan, they can get all or part of the loan forgiven. The rules include not laying off any workers or cutting hours or wages during the 60-day period the loan covers, and only using the money for payroll, utilities and rent.

Renee Grace of Mid-Columbia Title Company also said that for her, she felt she couldn’t give a proper review of the Paycheck Protection Program until she finished the process by applying for loan forgiveness.

So far, she said, it had been a “great program” that was easy to apply for and helped keep the business running smoothly despite lost revenue caused by the pandemic. But recipients haven’t been allowed to apply for loan forgiveness yet, and there are still a lot of questions that haven’t been answered about it, including how long a business would be given to pay back the loan if it isn’t forgiven.

“There are just too many variables left,” she said.

She said after the business received a PPP loan, she didn’t apply for other grants they might have qualified for because she didn’t want to use up resources that might help a business that was hit even harder.

“These people who had to close down completely and have no income, I didn’t want to take away from them,” she said.

Melissa Lindsay, chairwomaan of the Morrow County Board of Commissioners, said she was hearing from some hard-hit businesses that were in serious need that they were struggling to access grants from local government or Business Oregon. Some of those businesses, she said, had gotten a very small federal PPP loan or Economic Injury Disaster Loan during the first round of funding, and then regretted it after seeing how many other programs were only for businesses that had not been able to access the PPP before it ran out.

Lindsay shared that message with Rep. Greg Smith, R-Heppner, during a recent virtual town hall, and said she has suggested to other state leaders that it would be helpful to allow businesses that had received under a certain amount of PPP or EDIL funding to still apply for state grants.

Torie Griggs, director of the Boardman Chamber of Commerce, said she was seeing the same frustrations from businesses still in need of assistance as the pandemic drags on. She said the chamber and organizations, such as the Boardman Community Development Association, were working to help people find alternatives they qualified for.

Statewide, Oregon employers received 62,775 loans, according to the Small Business Administration. More than 300 Oregon lenders are qualified to handle the loans.

The Hermiston businesses on ProPublica’s database of large PPP loans that were contacted by the Hermiston Herald either declined to comment or did not return messages left for them. But the list shows most businesses were agriculture-related.

Leighton said as people continue to patronize businesses that have been affected by COVID-19, she hopes they remember that these businesses have been hit hard by declining revenue and new regulations. She said some customers had been rude to employees when asked to wear a mask or follow social distancing guidelines, even though the rules weren’t made by the business and those same rules make it harder on employees to do their jobs, too.

“We’re working twice as hard to put out a product right now,” she said.

To access the searchable database from ProPublica, visit projects.propublica.org/coronavirus/bailouts.