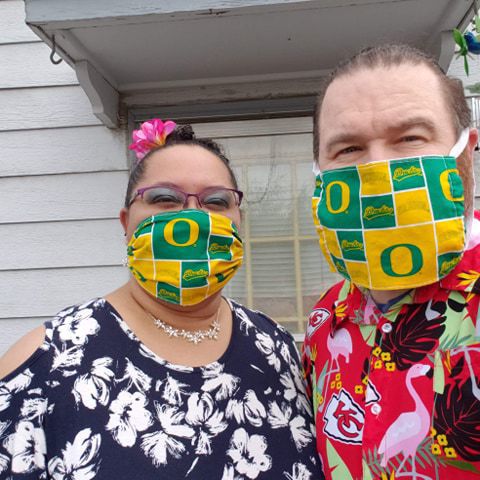 Paula and Pat Messenger dressed up in Hawaiian shirts and Oregon Ducks masks to virtually attend an online wedding ceremony for friends who had canceled their destination wedding for something small streamed online. 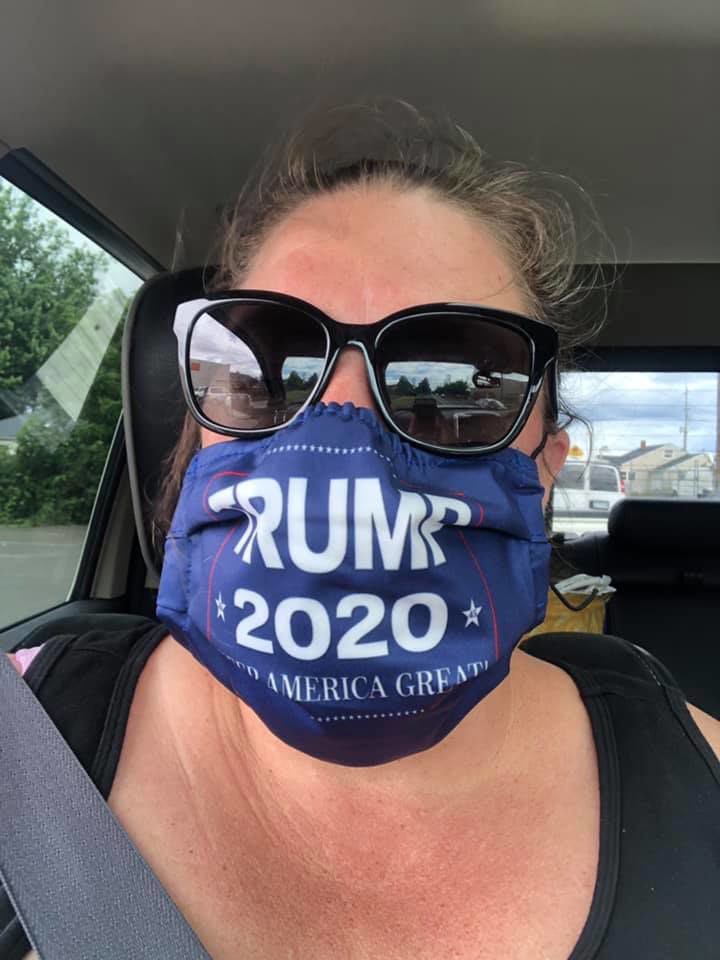 Shannon Hickam shows off her Trump 2020 mask she ordered from a seller on Etsy. 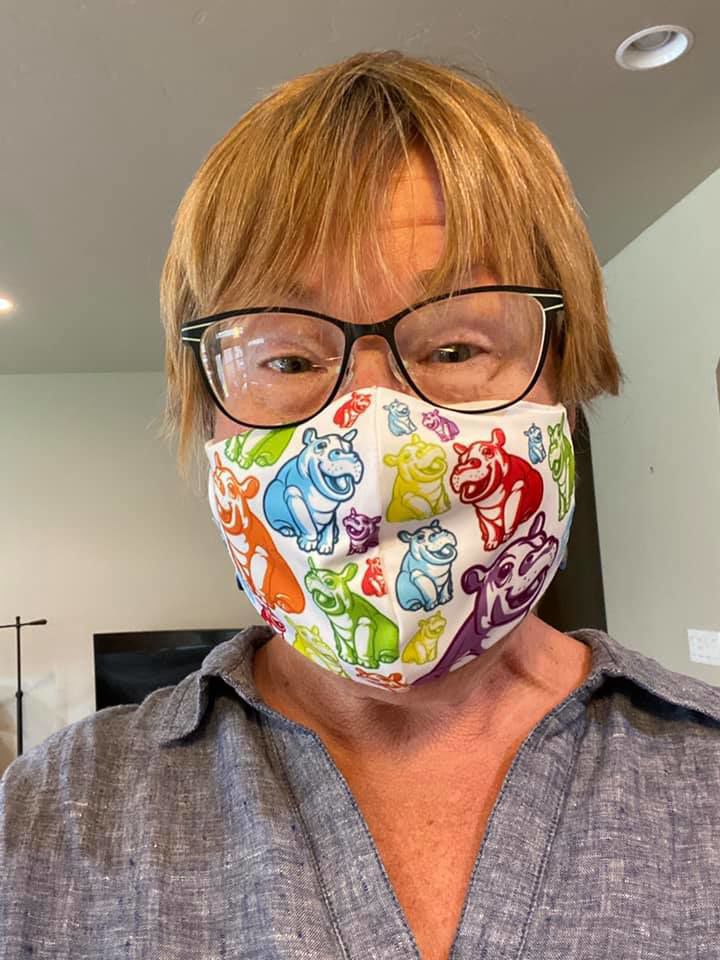 Kathy Street ordered this hippo mask from the Cincinnati Zoo to support Fiona, one of the zoo’s hippopotamuses. 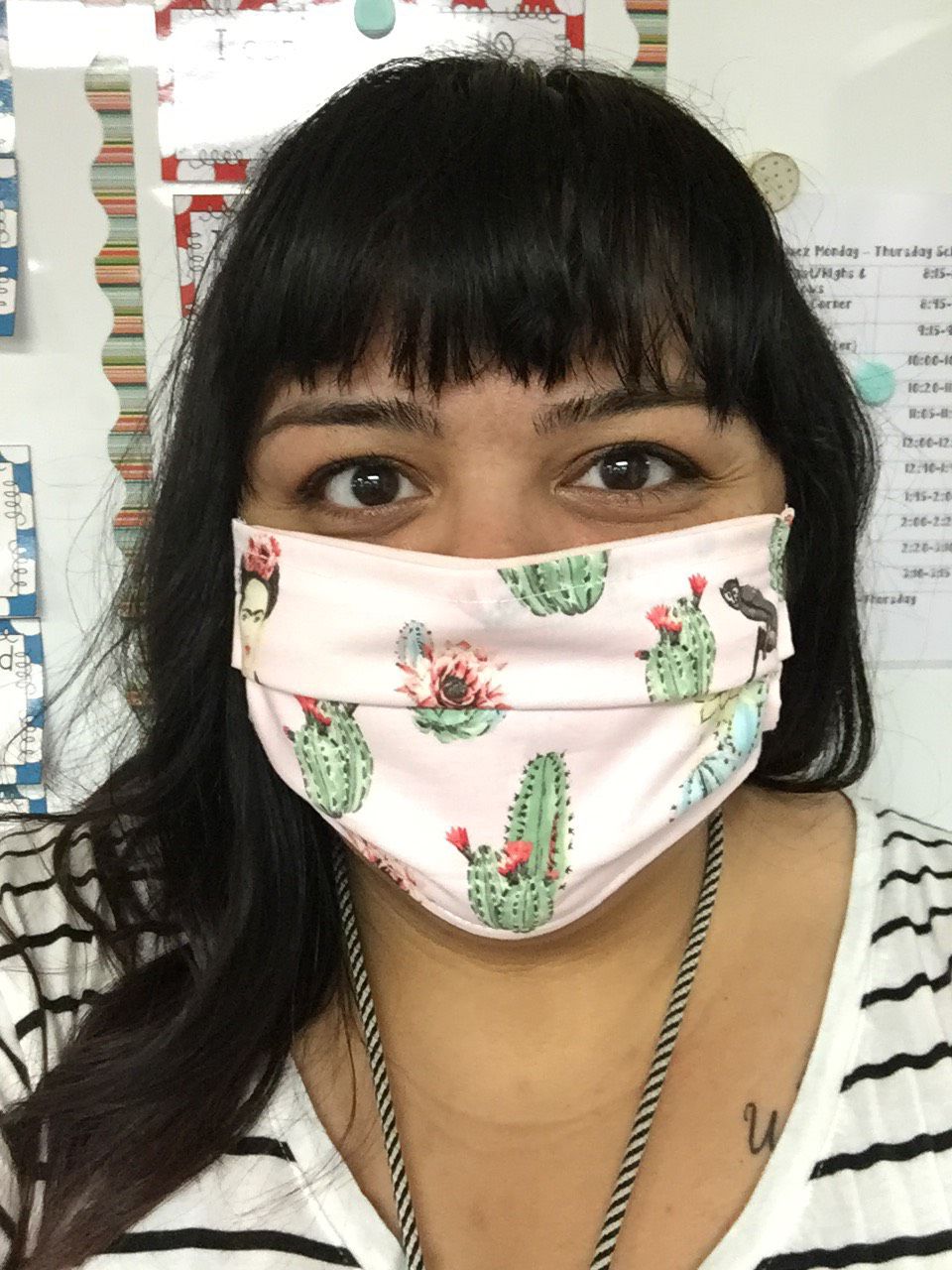 Kimberly Chavez-Sierra of Pendleton, wife of East Oregonian reporter Antonio Sierra, shows off one of her masks. 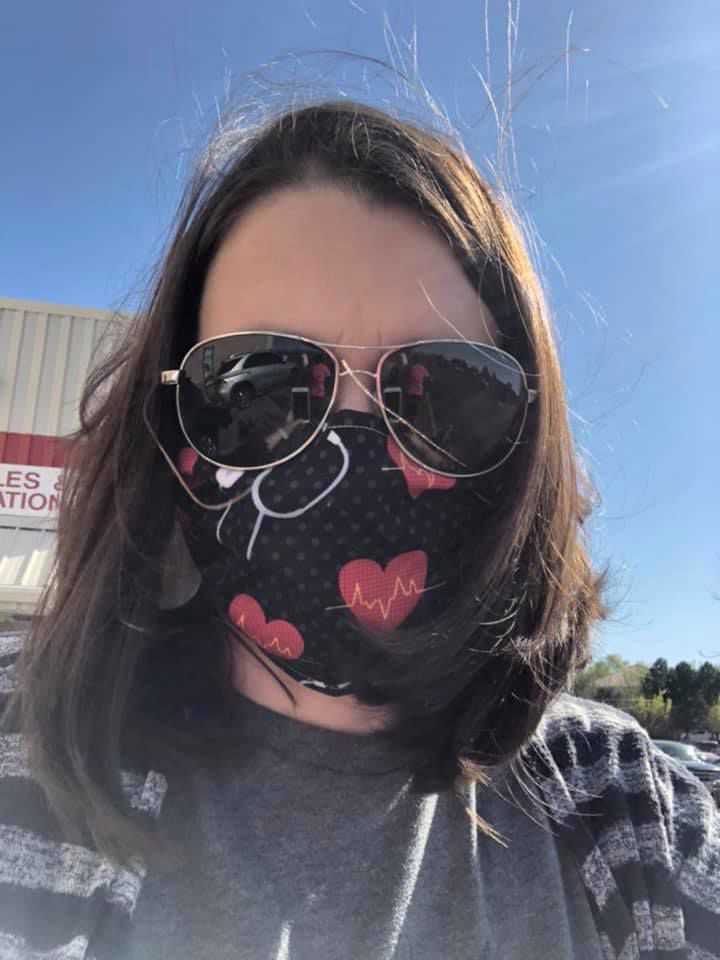 Bethany Adair borrowed this mask from her husband, a doctor, to go to Costco but later got her own. 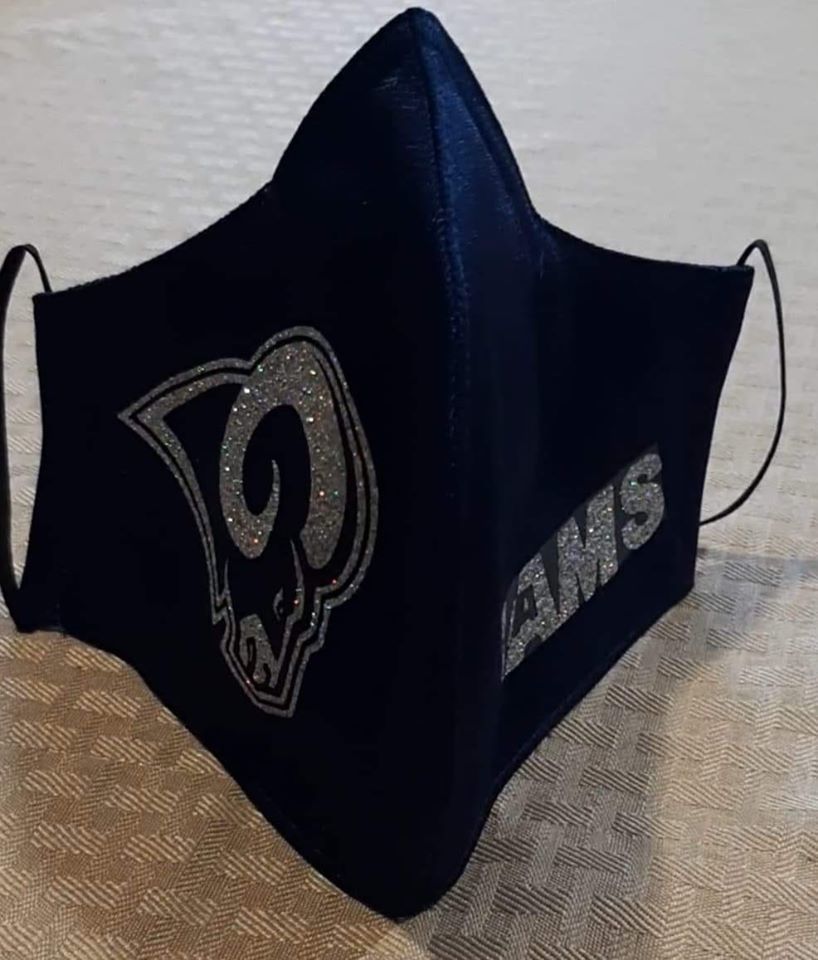 Taunji Knudsen's favorite mask is one with a sparkling Los Angeles Rams logo. 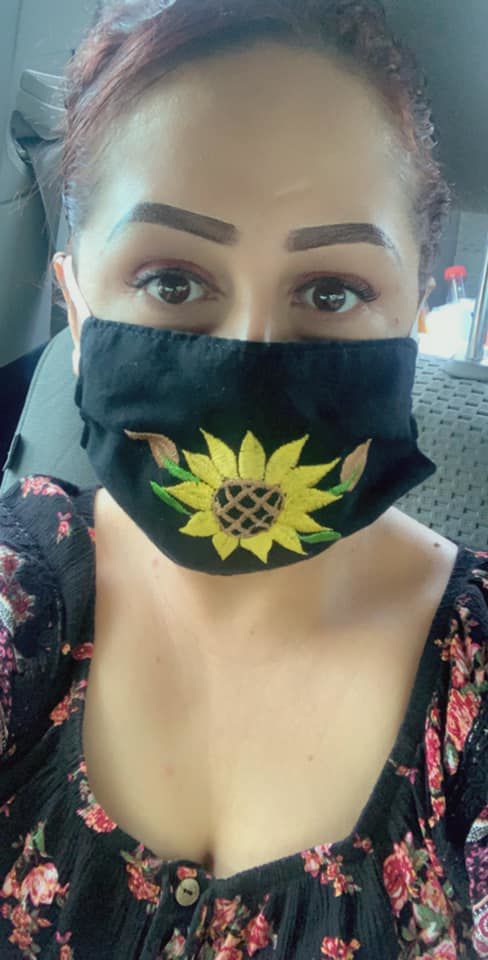 Maria Morfin shows off a mask she ordered from Mexico and wears to work every day. 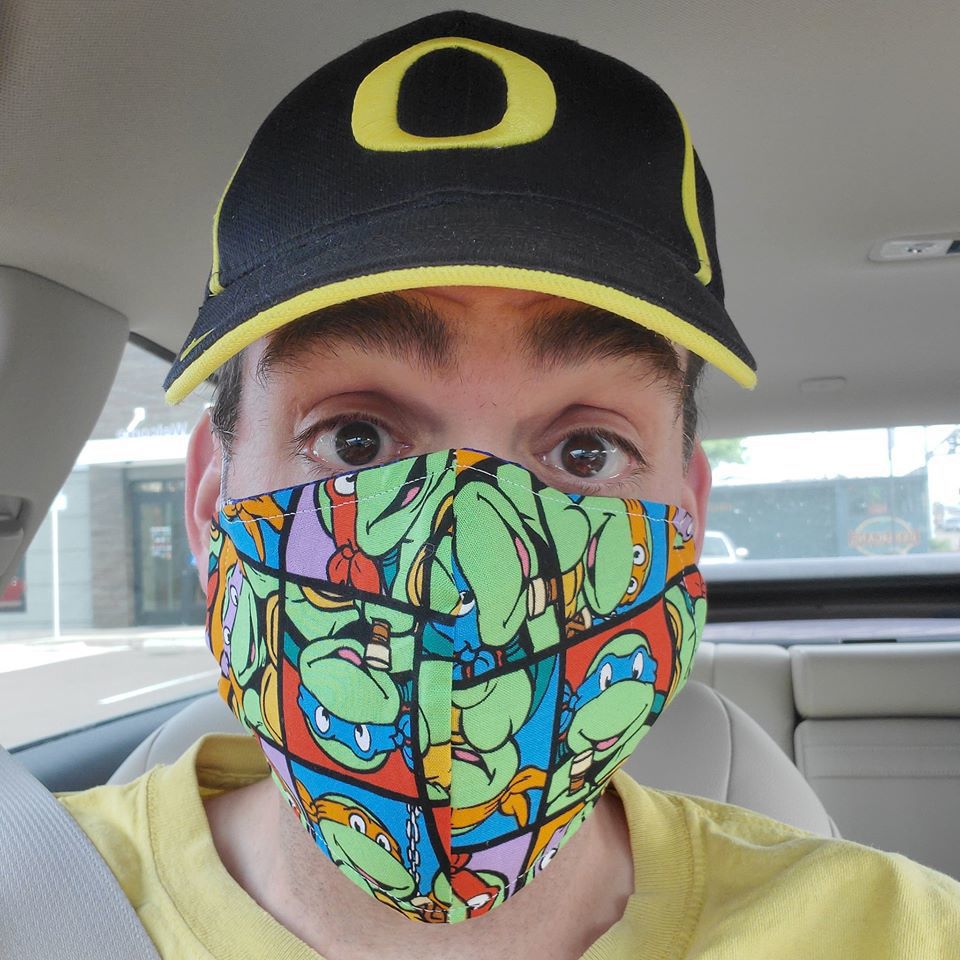 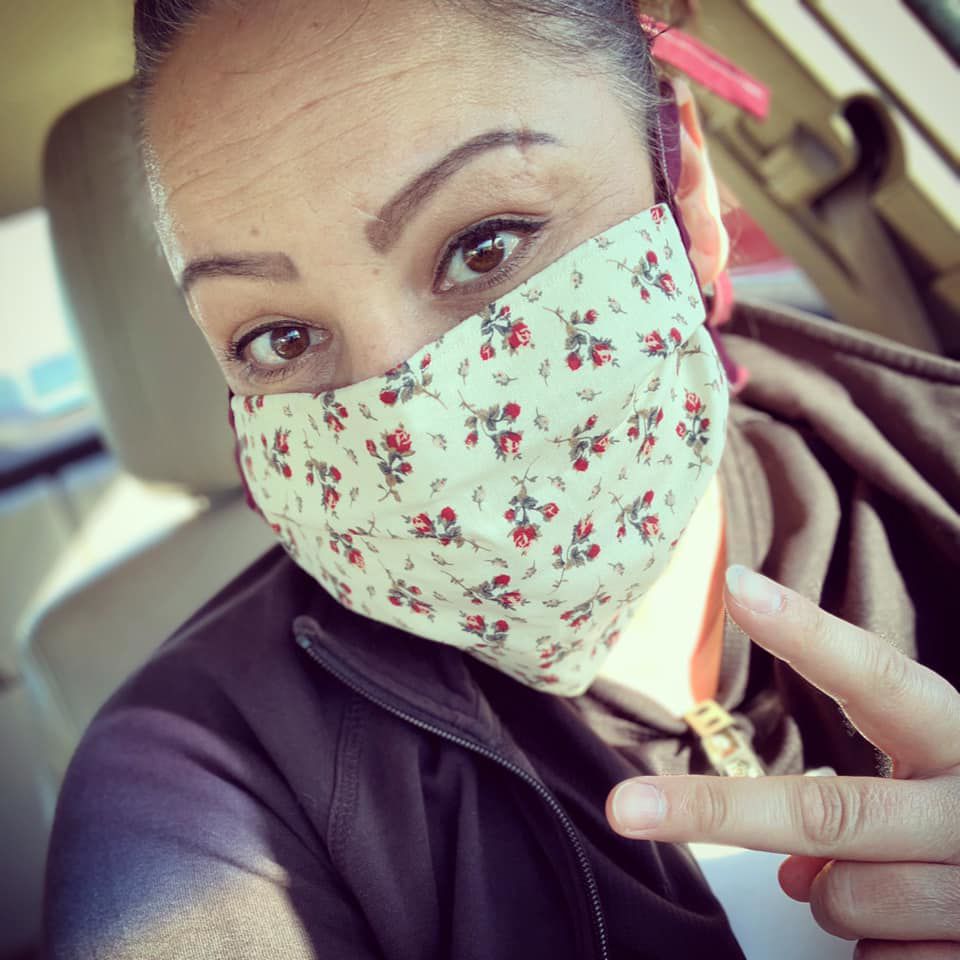 Becca LaBelle shows off a mask she made herself to wear to work.

Paula and Pat Messenger dressed up in Hawaiian shirts and Oregon Ducks masks to virtually attend an online wedding ceremony for friends who had canceled their destination wedding for something small streamed online.

Shannon Hickam shows off her Trump 2020 mask she ordered from a seller on Etsy.

Kathy Street ordered this hippo mask from the Cincinnati Zoo to support Fiona, one of the zoo’s hippopotamuses.

Kimberly Chavez-Sierra of Pendleton, wife of East Oregonian reporter Antonio Sierra, shows off one of her masks.

Bethany Adair borrowed this mask from her husband, a doctor, to go to Costco but later got her own.

Taunji Knudsen's favorite mask is one with a sparkling Los Angeles Rams logo.

Maria Morfin shows off a mask she ordered from Mexico and wears to work every day.

Becca LaBelle shows off a mask she made herself to wear to work.

When the world’s top fashion brands were planning out their 2020 looks, they probably weren’t expecting masks to become a hot spring fashion item.

The pandemic has spawned a cottage industry of mask-makers, however, who have pulled out their sewing machines in recent months and responded to the sudden demand for comfortable face coverings with a little flair.

Paula Messenger of Hermiston has a collection of masks in a variety of colors and patterns, including a University of Oregon mask, one for the Seattle Mariners and a purple and gold one for Hermiston’s graduation.

“I determine what shirt I’m going to wear, and then determine what mask I can wear that will match that, and try to have fun with it, even though this is a serious thing,” she said.

COVID-19 is very serious to Messenger, who has a health condition that makes her immunocompromised and at high risk from the virus. She also has friends who are sick with it now. So she wears a mask every time she has to go out, and hopes that even if the mask covers up her smile, the fun patterns might make someone smile anyway.

“I get the feeling I’ll start to get Christmas masks and things like that too,” she said.

Messenger got some of her masks from Josie Sisson, a friend she made in Hermiston who now lives in Moses Lake, Washington. Sisson said her daughter is a cancer survivor and her husband is an essential worker, so she dusted off her old sewing machine and made them masks at the beginning of the pandemic. Since then, she has shipped 840 masks to people around the country who found her through Facebook when she started selling her extra masks online.

“I cannot walk into Joann’s (fabric store) without walking out with a lot of cool fabrics,” she said. “I have 65 different fabrics now people can choose from.”

Since the early days when masks were nowhere to be found on store shelves and people were making them for themselves, major corporations have since gotten on board. Sporting goods brands like Adidas and Under Armour are selling masks designed for exercise. Department stores like Nordstrom are selling fashionable masks online. Disney is offering Star Wars masks.

Taunji Knudsen of Hermiston is a big Los Angeles Rams fan, so her favorite mask is a dark blue one with a sparkly Rams logo. She said the team sells official masks now, as do all the NFL teams, but she doesn’t like the new Rams logo so she ordered a homemade one from a fan she met in an online forum.

She said she wears one every time she is in public to protect herself, since she has asthma, and to protect others.

“As the temperature gets warmer it makes it a little more difficult, but the benefit outweighs the risk,” she said. “(Oregon) just saw our largest one-day total (of COVID-19) earlier this week, so now is not the time to be complacent.”

Knudsen said so far she hasn’t had anyone give her a hard time about wearing one, although she did share some gentle ribbing with a Seahawks fan sporting their team’s logo on their mask.

Sports aren’t the only fandom represented on masks. When Kathy Street of Boardman was recovering at home from an injury a couple of years ago, she closely followed the progress of a hippopotamus named Fiona, who was born dangerously premature and was nursed to health. So when Street was ordering masks she ordered a Fiona mask from the Cincinnati Zoo, which will use the proceeds to support its hippopotamus program.

Street, the Oregon Trail Library District director, wears a mask to the store now and said when the library reopens to patrons she will wear a mask to work, as do many Americans who work with the public.

In some places, such as hair salons and doctor’s offices, masks are required for employees, while other businesses have voluntarily implemented a requirement for their employees to be masked during their shift. Some employers provide disposable surgical masks or a cloth mask with the name of the business, while others require employees to provide their own.

Becca LaBelle wrote on the Hermiston Herald‘s Facebook page that she sews her own masks to wear to work each day, using fabric that will match her outfit.

“If you have to wear one might as well look good, right?” she said.

Shannon Hickam proudly wears a “Trump 2020” mask when she goes out. She said she ordered a bunch for herself and her family members off of Etsy, a website for people to sell handmade items.

The mask business began flourishing on the site before major clothing manufacturers started to catch up with demand. Vogue reported that people searched for masks more than two million times on Etsy between April 2-4.

Hickam said not everyone appreciates her walking advertisement for the president.

“I get a lot of grief sometimes, but I just ask people if they cashed their (stimulus) check, and that usually shuts them up,” she said.

Wearing a mask can be uncomfortable, but the frequent mask-wearers interviewed for the article said getting one that fits well helps significantly, as well as finding straps or ties that don’t rub on the ears. Hickam said she likes wearing the extenders that allow people to hook their masks farther back on their head instead of behind their ears.

Some recommended getting masks with a flexible metal nose piece that can mold the top of the mask securely to the wearer’s nose and cheeks, particularly for people who wear glasses and have trouble with them fogging up. Messenger said she has found that cleaning her glasses multiple times a day and drying them on a soft cloth not washed with fabric softener also tones down the fogging problem.

Bethany Adair of Hermiston said she at first tried to borrow a cloth mask from her husband, a physician assistant, but she found that it didn’t fit well. She ended up getting a couple more her size from a friend who sews.

She said it’s important not to “mask shame” people who could be not wearing one for a mental or physical health reason, but also said that for people who find them uncomfortable, it does seem to get easier as time goes on.

“I’ve gotten a little more comfortable with it,” she said.

She said she hasn’t had her children wear one yet, since they have mostly stayed home, but that’s a discussion their family will have to have when they return to places like church.

“I’ll probably try and find some fun patterns for the kids, or maybe let them decorate their own,” she said.

Editor's note: A previous version of this story misstated Bethany Adair's husband's job title, and classified a mask as a Seahawks mask instead of a Mariners mask. The Hermiston Herald regrets the errors.