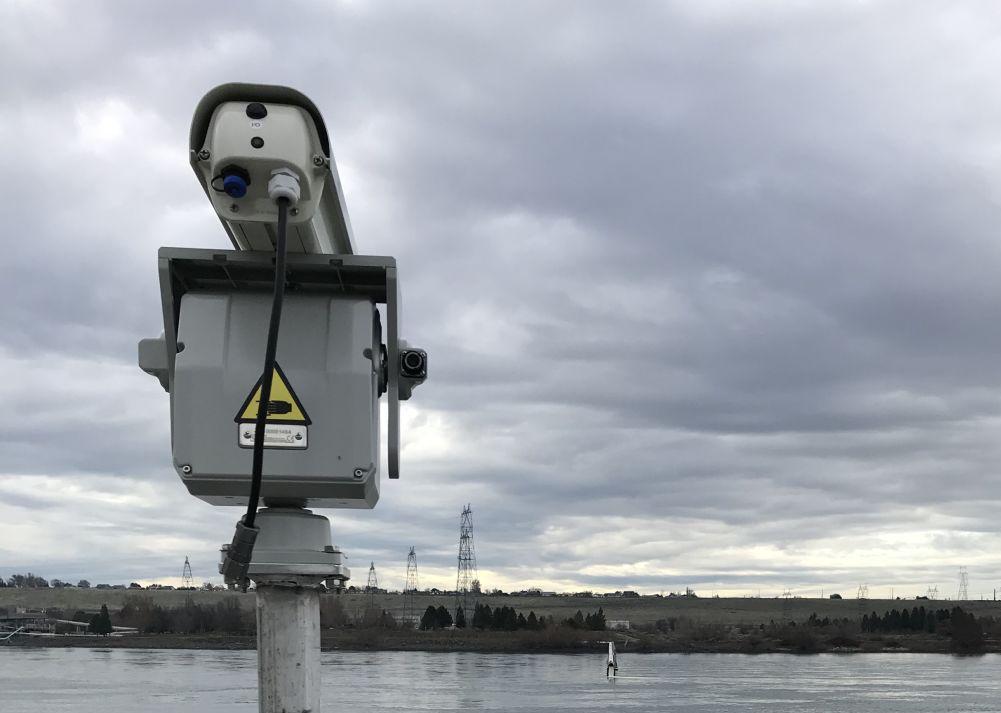 The Walla Walla District used to rely on a sprinkler system to scare birds away, but it was damaged by high waters along the river last spring. 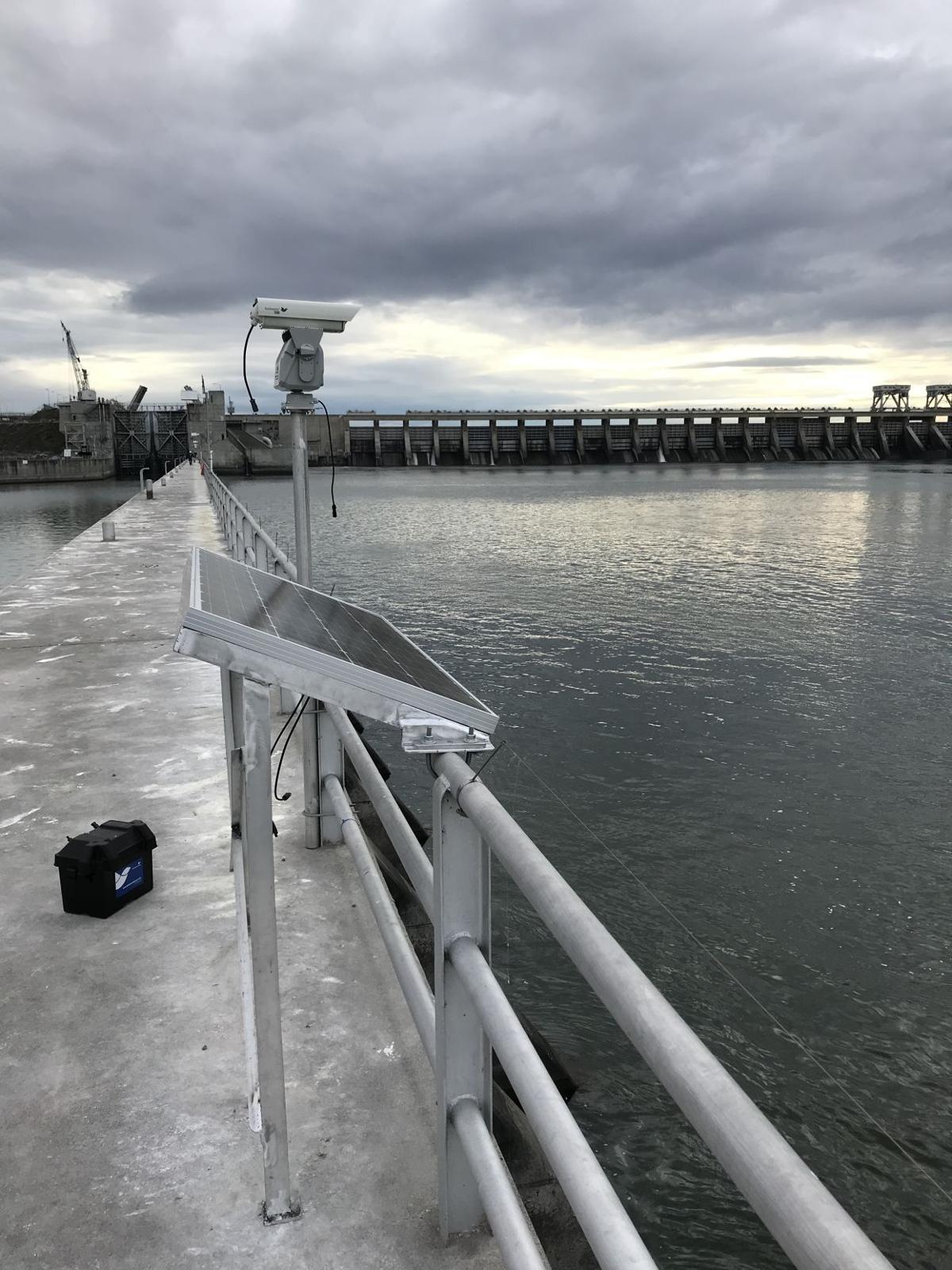 A second laser, purchased in September, will be installed on the juvenile bypass outfall pipe at the McNary Dam this spring. 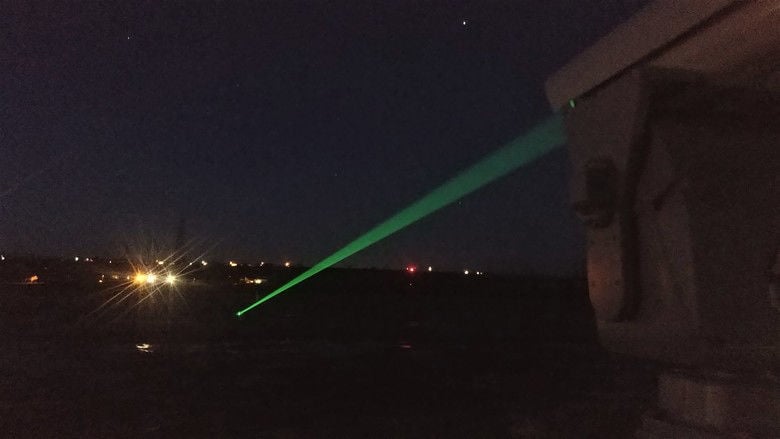 Depending on the weather, the lasers’ beams can be visible up to a mile away, according to a recent press release from the US Army Corps of Engineers.

The Walla Walla District used to rely on a sprinkler system to scare birds away, but it was damaged by high waters along the river last spring.

A second laser, purchased in September, will be installed on the juvenile bypass outfall pipe at the McNary Dam this spring.

Depending on the weather, the lasers’ beams can be visible up to a mile away, according to a recent press release from the US Army Corps of Engineers.

Birds trying to feast on juvenile salmon at the McNary Dam are facing a new deterrent — bright green lasers.

In the past, the U.S. Army Corps of Engineers Walla Walla District relied on a sprinkler system for bird abatement. Sprinklers would spray water near the juvenile bypass outfall pipe, but some waterfowl weren’t deterred away from snacking on the young salmon. Last spring, the system was wiped out by high waters on the river, so the district invested in its first laser instead.

“The laser is still considered a trial effort,” said USACE Biologist Christopher Peery. “Initial observations appear promising, but it is probably not going to be the solution to all our salmon predation worries.”

The laser has a range of around 950 feet to a mile, weather depending. Its beam moves in random patterns, and is meant to trick birds into believing a solid object is chasing them. It fended off birds well enough through spring and summer, but was installed in an inconvenient location. The U.S. Army Corps of Engineers bought the second laser in September, which will be mounted onto the outfall pipe this spring.

The cost of both lasers, along with solar panels and mounting hardware, came to a total of about $22,200, according to USACE biologist Tim Wik.

“The exact predation rate for juvenile salmon at McNary Dam can vary, but it is obvious that birds are actively feeding in the river near the dam at various times of the year,” Peery said.

He said millions of juvenile salmon are eaten along the lower Columbia River each year.

“The dam slows all the fish down, and they use the fish ladder. It’s like having a bird feeder in our backyard,” she said. “They ought to hire a falconer.”

And while the Walla Walla District doesn’t appear to be hiring a bird of prey to scare the salmon-eating birds away anytime soon, it might purchase a Long Range Acoustic Device that would emit distress calls from predatory birds and accompany the lasers. This too, would be installed in the spring or summer.

The Walla Walla District and the U.S. Department of Agriculture have an agreement which dictates that each spring, the USDA’s Wildlife Services group comes and hazes the hungry birds.

The hazing includes setting off fireworks and shotgun blanks, as well as using boats to scare away lingering birds, and will continue this spring.

Studies suggest that bird abatement lasers might harm a bird’s eyes. In 2016, the University of Washington conducted a study on the effectiveness of lasers as bird abatement against seagulls at fisheries which stated that not much was known about how lasers might affect the retinas of gulls.

In 2018, a researcher from Purdue University told NPR he was conducting a study about whether lasers could harm an animal’s retinas, which could affect their ability to mate, hunt and seek shelter.

“The manufacturer indicates that it is possible that a laser can injure a bird’s eye if it directly strikes the retina, this is why the lasers will not directly target birds, instead they will move through the area we would like to keep the birds from,” Peery said.

He added the laser targets move slowly to allow birds time to avoid being in close contact with the light.

In April, according to the district, the lasers will be evaluated.

If the lasers are effective at warding off birds this spring, the Walla Walla District will consider adding them to other area dams, according to a press release from the U.S. Army Corps of Engineers.