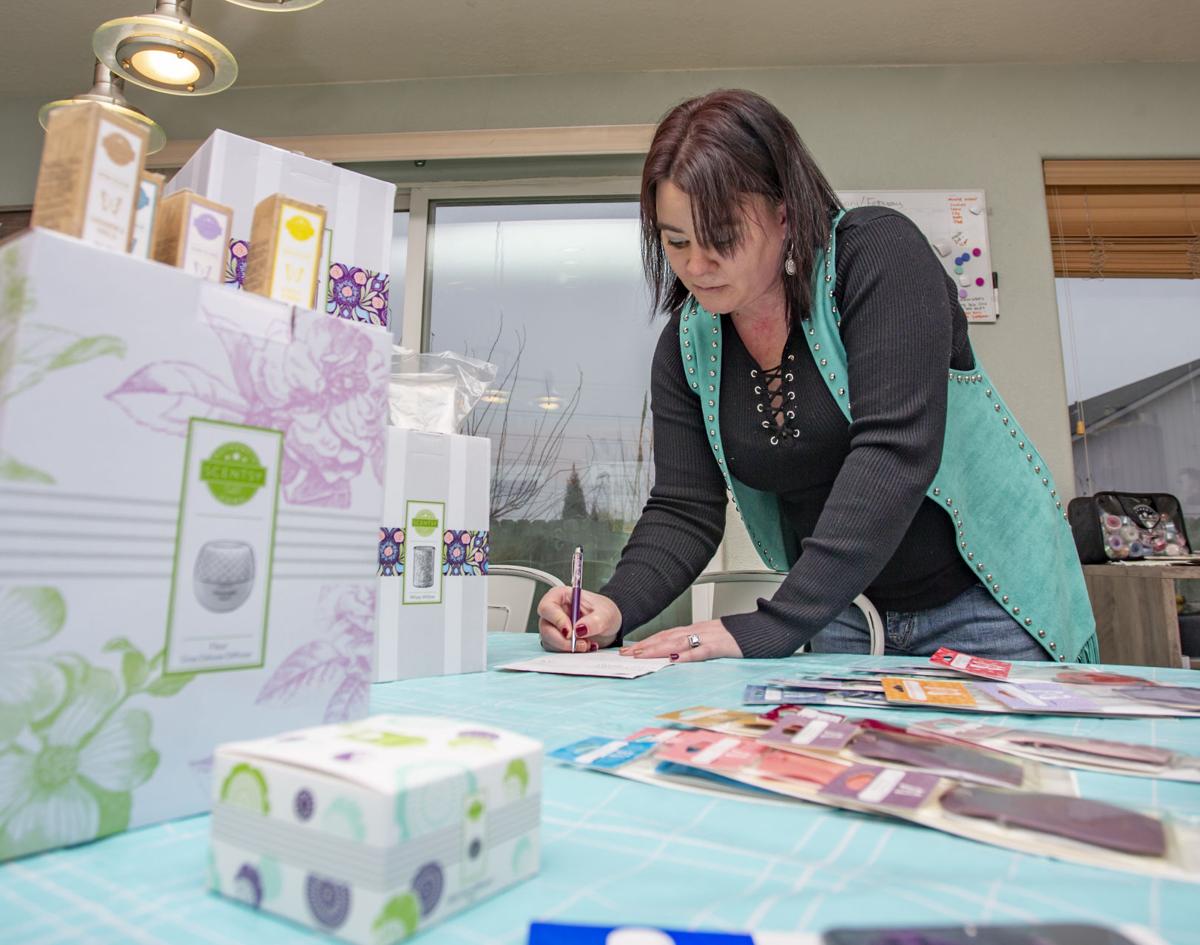 Casandra Whetsler fills out information for a Scentsy order on her dining table in Umatilla on Feb. 4. 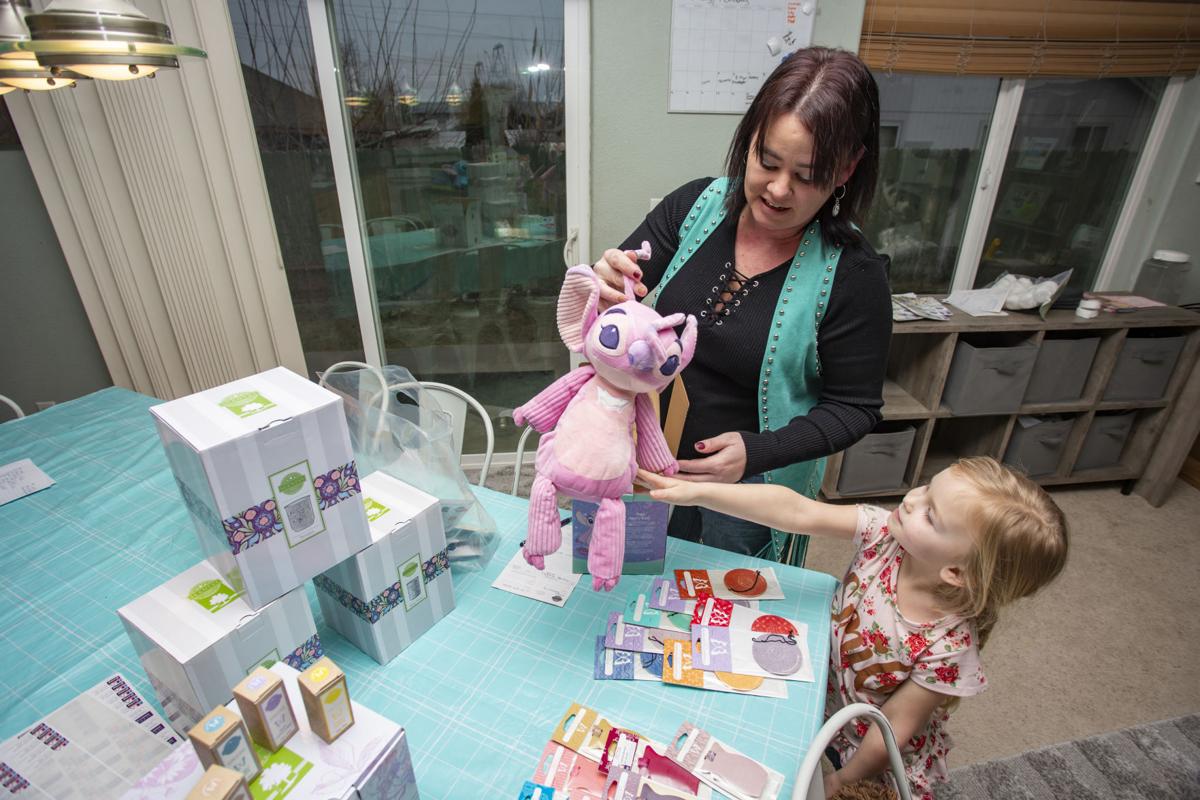 Casandra Whetsler shows a new Scentsy product to her daughter, Lily Leonard, 4, while packaging an order at her home in Umatilla on Feb. 4. 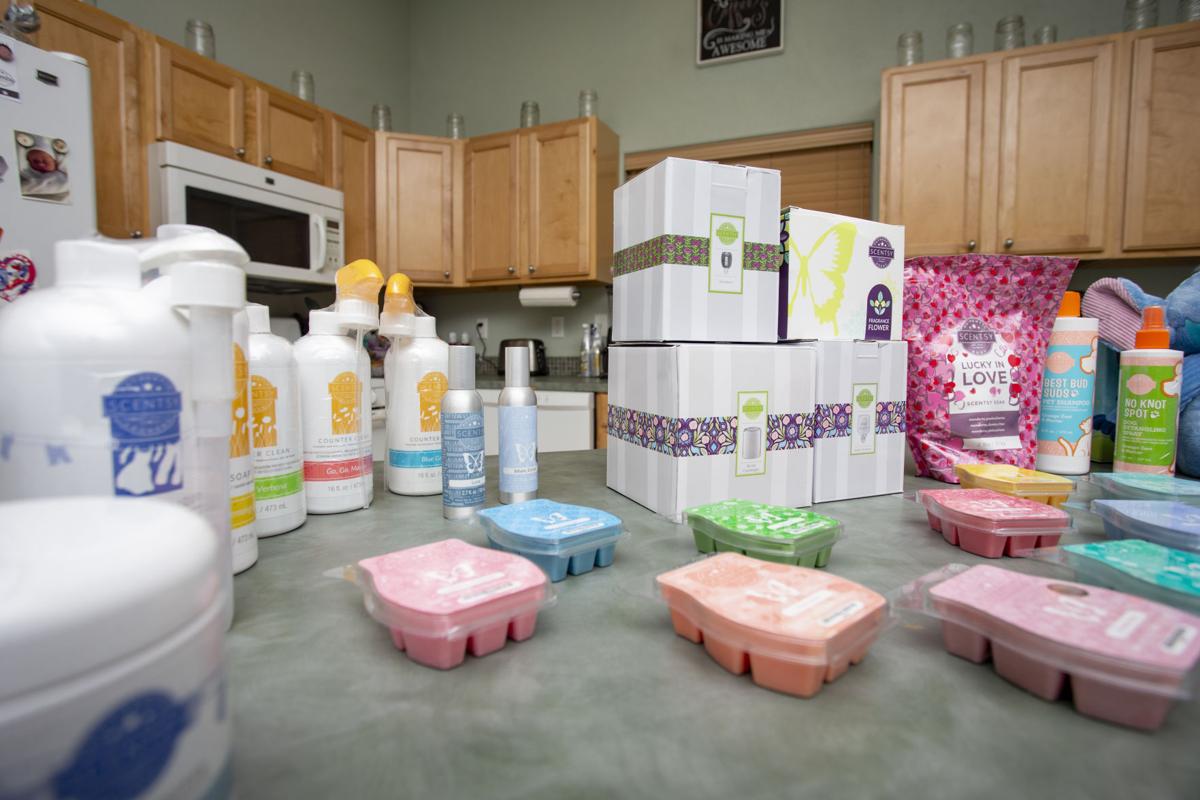 Scensty products on display on the island in Casandra Whetsler’s kitchen in Umatilla. 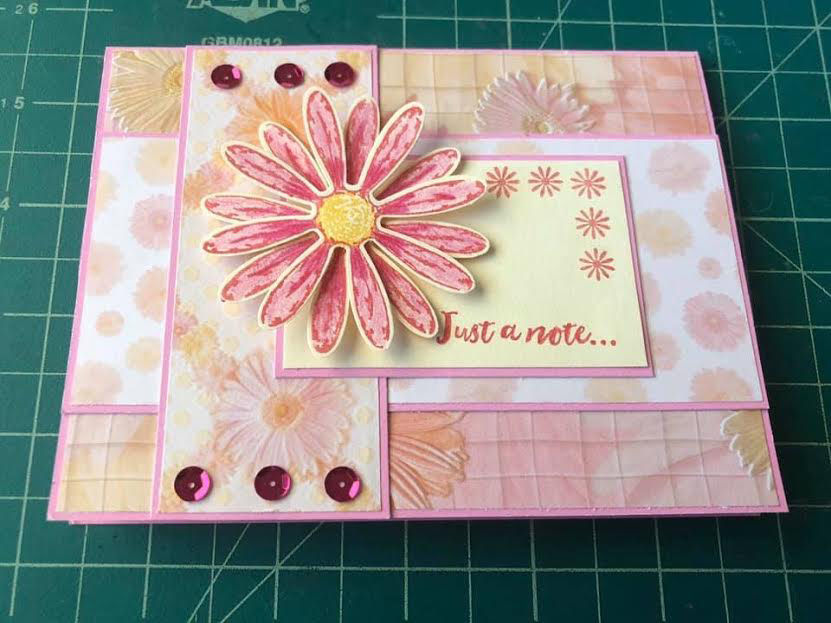 Olivia Olsen, of Hermiston, makes homemade greeting cards, such as this one, and sells them at yard sales.

Casandra Whetsler fills out information for a Scentsy order on her dining table in Umatilla on Feb. 4.

Casandra Whetsler shows a new Scentsy product to her daughter, Lily Leonard, 4, while packaging an order at her home in Umatilla on Feb. 4.

Scensty products on display on the island in Casandra Whetsler’s kitchen in Umatilla.

Olivia Olsen, of Hermiston, makes homemade greeting cards, such as this one, and sells them at yard sales.

While anonymous comments online offering the chance to “make money from home” are often scams, many Eastern Oregon residents have found their own ways to make extra cash from their home.

Some do so through multi-level marketing companies that sell their product through independent consultants instead of retail stores.

Casandra Whetsler, of Umatilla, has been selling Scentsy products for nine years now. The company’s signature product is a line of wax “wickless candles” that produce scents when placed on a warmer.

Whetsler said she keeps about $1,000 of inventory on hand in her home and spends about an hour a day doing tasks, such as updating her Facebook page with posts about new products or ordering more inventory. She said on good months she earns between $400 to $800 in commissions.

“There are slow times,” she said. “January is mine, (with) everyone recuperating from Christmas. But it’s not really challenging, you just learn the hard parts over years of selling.”

The free and discounted products that sellers earn also contribute to her other line of income, as she uses Scentsy’s cleaning product line to supply her house-cleaning business.

Scentsy’s 2018 income report, the most recent posted on its website, lists the average commission for someone who was active with the company for all 12 months at $1,981 per year. The top consultant in the company earned $967,423 in commissions in 2018, according to the report, but the median was $697, meaning half of Scentsy’s sellers earned less than that over the course of a year.

In multi-level marketing companies, sellers get commissions from sales by people they recruited to sell. But Whetsler said Scentsy is set up in a way that you can make money without recruiting people — she only has one person “downstream” from her.

“It is kind of like a pyramid, but I don’t push people to take the plunge with me,” she said. “I want them to pursue things they love. Scentsy is what I love and it helps bring income in for splurges.”

LuLaRoe has been the target of multiple class action lawsuits claiming it is a pyramid scheme that misled and pressured people into purchasing thousands of dollars of clothing that they were unable to sell or return, then convinced them to recruit more people into an already oversaturated market.

In response to one such lawsuit in 2017, LuLaRoe released a statement saying the accusations were “baseless, factually inaccurate and misinformed” and that the company’s success had made it a “target of orchestrated competitive attacks and predatory litigation.”

Despite some people losing money from participation in multi-level marketing companies, others feel it’s a good way to supplement their income.

Tamara Bow, a registered nurse from Umatilla, said in an email to the Hermiston Herald that she can’t disclose how much she makes a month from selling Younique makeup, but said she feels the time she puts into it is “definitely” preferable to picking up extra shifts at work.

“It can sometimes be a challenge when someone signs up and expects to retire from their full-time job and earn all the free trips, without putting any work into it,” she wrote. “This is like any other entrepreneurship, you have to put time into it, in order to be paid like a full-time job.”

She cautioned people looking into participation in a multi-level marketing company to do their research first and ask about specific companies’ policies about start-up costs, recurring fees, cancellation fees, automatic shipping of new inventory, returns and website costs. One reason she was drawn to Younique specifically, she said, was their lack of fees. She has also enjoyed using the product and bonuses, such as the cruise to the Bahamas she took last week courtesy of the company.

Not everyone who starts a home-based business does so through a multi-level marketing company. Some prefer to work for themselves, which may make them miss out on bonuses but also gives them more control over their expenditures and revenue.

Olivia Olsen, of Hermiston, started a small side business making greeting cards from home about two years ago. She said she always enjoyed making the intricate cards, but she started selling them after a friend gave one of her homemade cards to a coworker, and people started requesting she make cards for them.

“It’s just spread by word of mouth,” she said.

Olsen said it takes 30 to 40 minutes to make one card, and she charges $5 to $8 per card, depending on the cost of the materials used. She mostly sells to friends and family, but she also puts out a basket of cards at friends’ yard sales and donates batches of cards to auctions that Hermiston school groups put on to raise money. She can’t make a living off the business, she said, but it turns a stress-relieving hobby into a little extra cash she puts away for “emergencies.”

“It’s nice people appreciate them when I make them,” she said.

Ana Cecilia Rodriguez, of Hermiston, also started a home-based business creating home decor, such as succulent arrangements and signs. As a stay-at-home mother of six children, she said she started Cecilia’s Arts and Crafts because she wanted to help contribute toward what her husband was earning.

She said she makes the crafts while her children are at school and sells them for as much as $35 at places like the farmers market.

Others in town offer services, such as piano lessons or tutoring, in their homes instead of products.

Hermiston City Planner Clint Spencer said he frequently gets questions about whether a home-based business in a residential zone would run afoul of city zoning laws. The city’s code of ordinances permits home-based businesses in a residential zone if the building is primarily used as a residence, less than one-fourth of the ground floor is taken up by the commercial activity and the building maintains the “outward appearance” of a residence.

“There are lots of home occupations in town where people might do accounting out of their homes, or run a small, appointment only hair cutting business out of their homes,” Spencer wrote in an email. “As far as online sales, that’s one that is perfectly acceptable. It’s a retail use, but it’s done on an order by order basis. That’s a big difference from having display shelves and customers entering a store.”