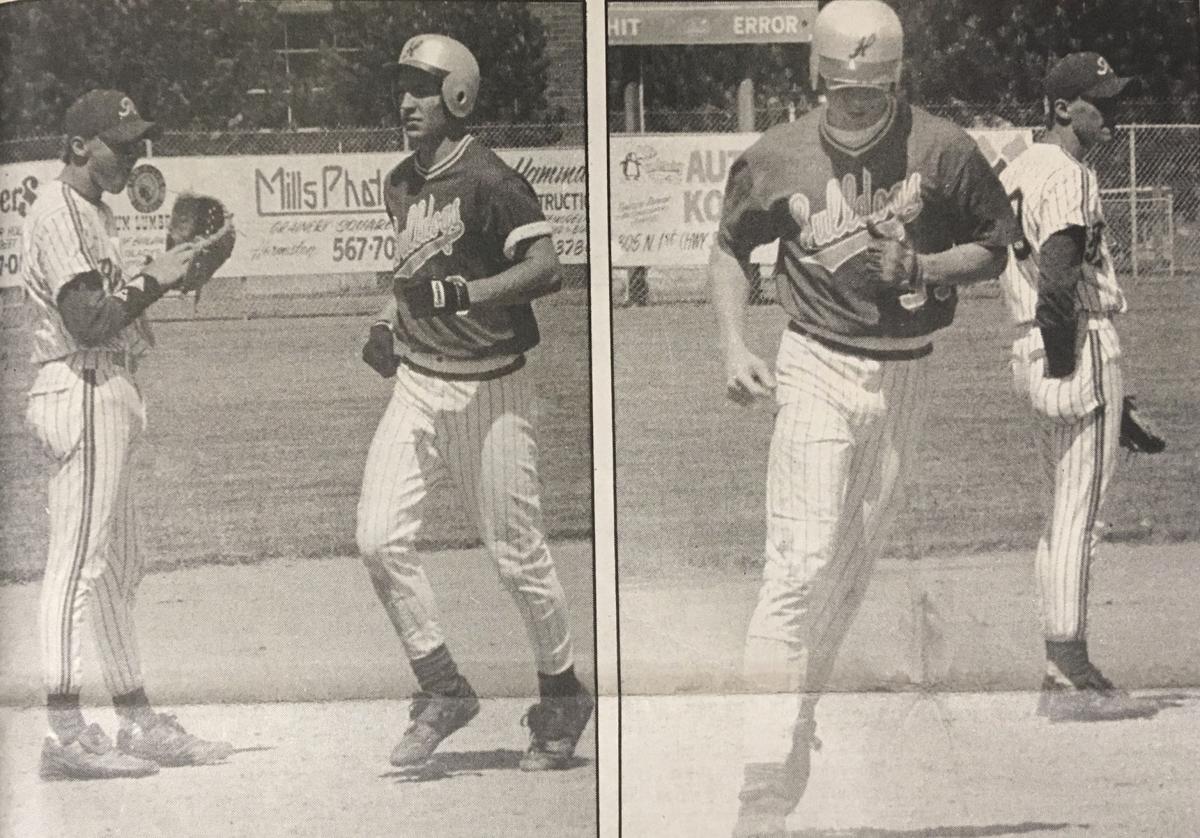 HH file photoRyan Ferguson (left) and Bucky Jacobsen round the bases after hitting home runs in a double-header sweep of Redmond in 1993. Jacobsen went on to play for the Seattle Mariners in 2004. 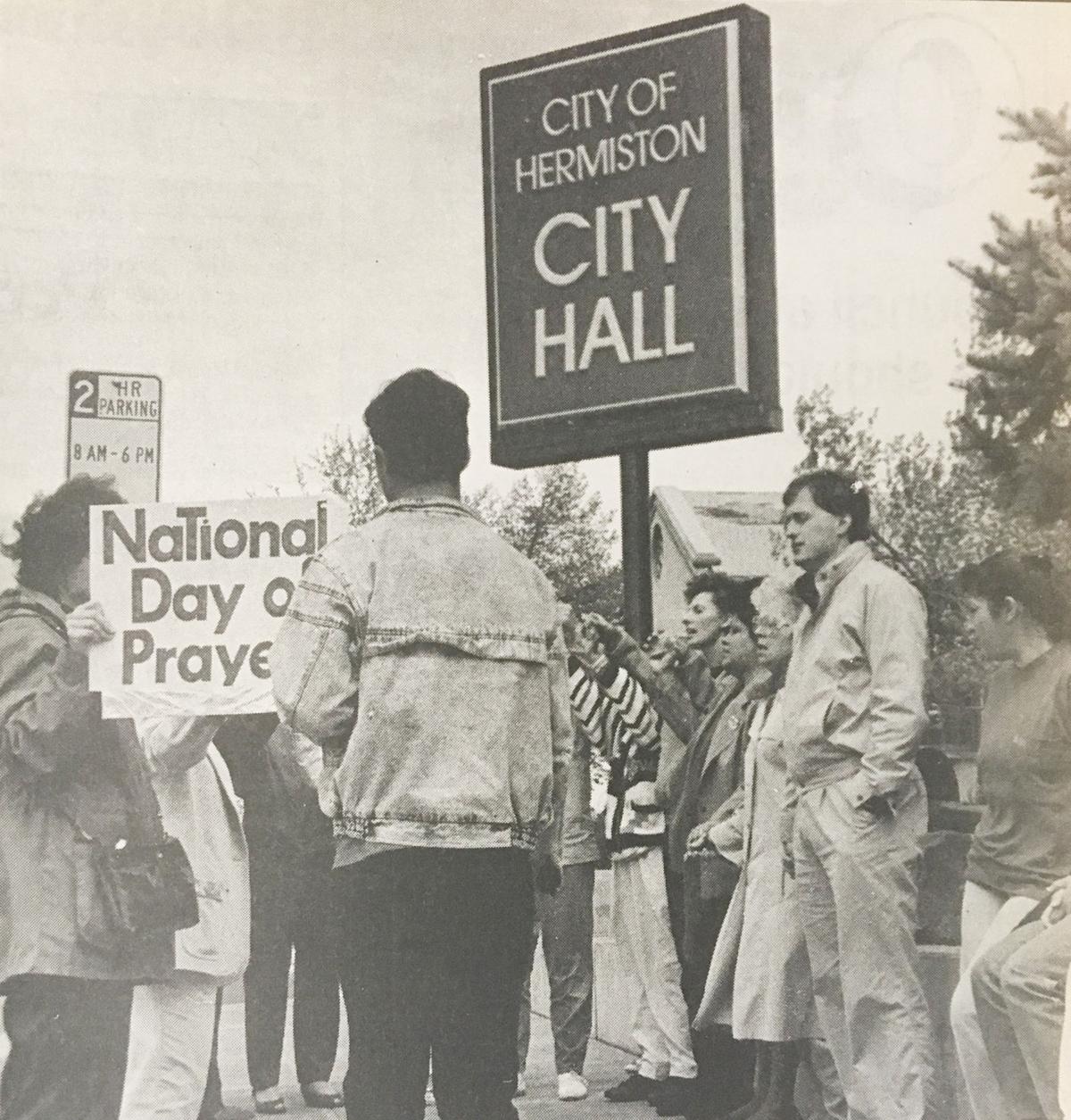 HH file photo More than a dozen people turned out in 1993 at City Hall to take part in the National Day of Prayer. Despite heavy winds, the group's prayers for the nation, the city and our schools could be heard by passers-by.

HH file photoRyan Ferguson (left) and Bucky Jacobsen round the bases after hitting home runs in a double-header sweep of Redmond in 1993. Jacobsen went on to play for the Seattle Mariners in 2004.

HH file photo More than a dozen people turned out in 1993 at City Hall to take part in the National Day of Prayer. Despite heavy winds, the group's prayers for the nation, the city and our schools could be heard by passers-by.

Hermiston School Board members heard the first solid suggestions for cutting about $1.5 million from the district’s budget.

Pratton stressed that the list contained proposals for the next school year. However, the proposals were approved by the board and will go to the budget committee to serve as a basis for building next year’s budget.

To raise revenue the district is looking at charging a $50 user fee for participating in one high school sport. The fee would be $100 for two sports or $140 for a family.

It was also considering increasing pool rates by 50 percent and increasing breakfast and lunch prices by 25 cents.

• Finding ways to create new space for the growing population in Hermiston schools could involve the construction of one or two new buildings, if Hermiston School Board agrees with recommendations from the Planning for Growth Committee.

Board members heard three options for new buildings in the district. The choices, ranging in cost from $11 million to $17 million, all included construction or major remodeling.

The first recommendation was to build two new middle schools on property owned by the district on Diagonal Road and Johns Avenue. The middle schools would hold grades six through eight, solving some of the overcrowding at the elementary schools. Each building would be designed for 600 students, and would include a remodel of Armand Larive Junior High for use as a small elementary.

The second recommendation was to build one large junior high for about 900 students on the Diagonal property. In addition to the junior high a new 500-student elementary would be built on the Johns Avenue property.

A third recommendation also asks for the construction of a large junior high. However, instead of building a new elementary school, additional wings or classrooms would be added to the existing elementary buildings.

Hermiston School District 8-R was among the many throughout the state whose school budget went down to defeat Monday when the polls closed. There were 428 ‘No’ votes and 301 ‘Yes’ on a $1,063,873.56 budget above the 6 percent limitation.

Most of the larger districts throughout the state were defeated as well as those with extremely high budgets. Umatilla and Morrow counties also defeated the IED equalization levy of $1,570,586 with 2,794 against and 2,440 for.

• Kenny Ferguson, 6, son of Mr. and Mrs. Ferguson, was tossing rocks at a bottle. The bottle broke and a sliver of glass flew into his right eye, cutting the eyelid and the eyeball. He was taken to a Pendleton hospital.

In February he was hospitalized for treatment on his left eye which he injured with a sharp stick.

He pleaded guilty to an attack with a dangerous weapon, drunkenness and vagrancy, and was taken to the Pendleton jail late that afternoon.

Atkins went on a drunken spree Tuesday, slashing his daughter-in-law, Mrs. Christina Atkins, in the arm causing a gash that required seven stitches. The assault almost back-fired when he gashed himself in the leg accidentally.

He was arrested by chief of police B.J. Nation and placed in the local jail, pending his appearance in justice court.

Chief of Police Laudenslager received an order from the Shoshone County draft board to look up one Alvin J. Strader and deliver him to the sheriff at Wallace, Idaho, as quickly as possible. The letter accompanying the order conveyed the information that Strader had been drafted April 26, and that instead of appearing wrote a letter to the board explaining that he was averse to going to war and taking human life, and rather than do so would face a firing squad.

Evidently he had no intention of evading the outcome, for on leaving Shoshone County he came to his home in Irrigon on a visit to his parents and happened to be in Hermiston on the day the order for his apprehension came to the chief of police.

He took it quite as a matter of fact on being informed that the draft board wanted him in Wallace, and together with the police chief officer left that night for the Idaho mining town, where he was delivered into the hands of the sheriff Sunday afternoon.

What disposition will be made of his case is not known as yet, but it is probably the young man will be sent across the big pond to the battle front or interned until the war is over.