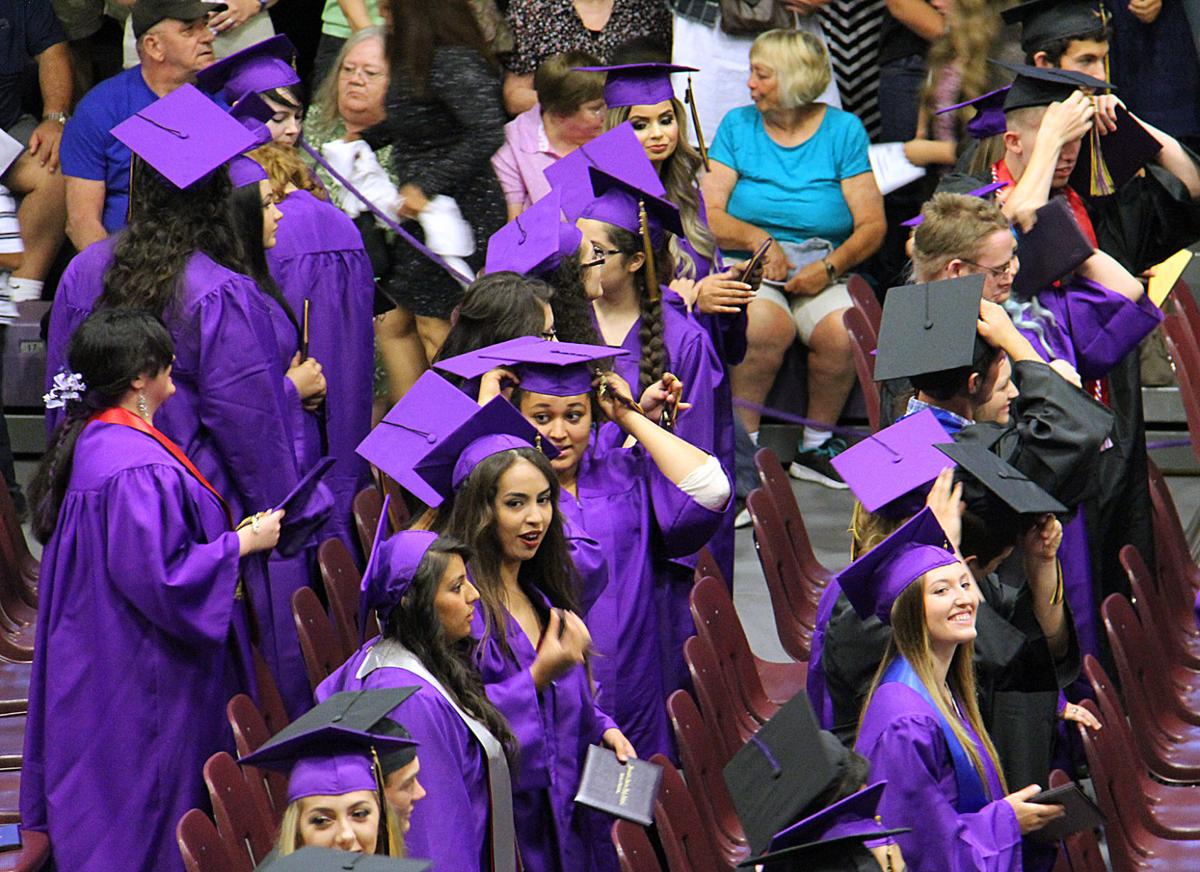 Graduates from the Hermiston High School class of 2016 participate in commencement ceremonies in this file photo from one year ago. 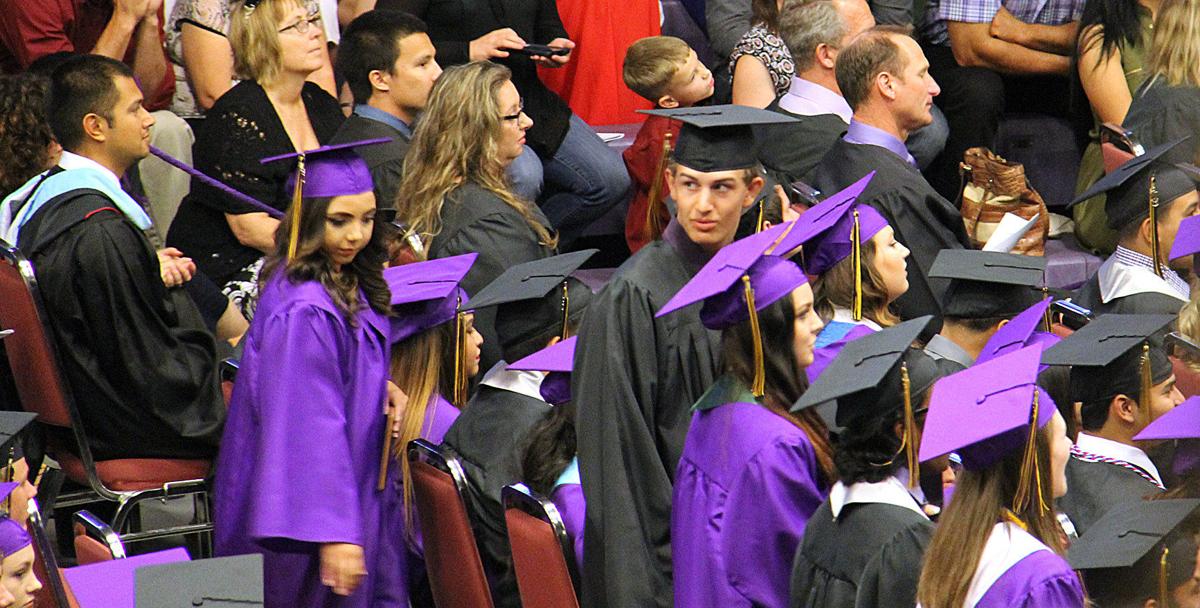 This file photo shows some of the approximately 240 Hermiston High School graduates who received diplomas in 2016. The graduating class for 2017 will set a new record for seniors receiving diplomas this weekend. 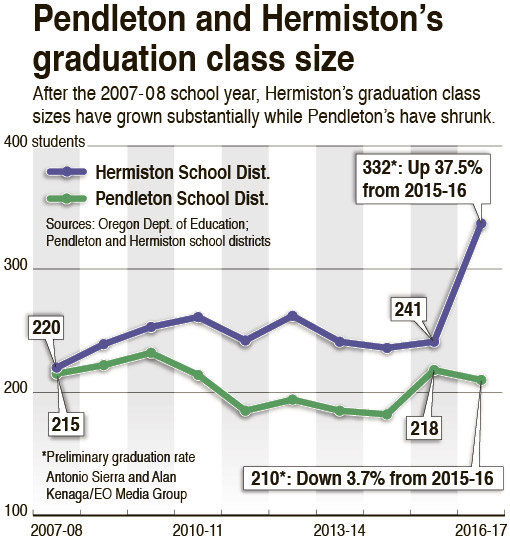 Graduates from the Hermiston High School class of 2016 participate in commencement ceremonies in this file photo from one year ago.

This file photo shows some of the approximately 240 Hermiston High School graduates who received diplomas in 2016. The graduating class for 2017 will set a new record for seniors receiving diplomas this weekend.

Hermiston’s population has spiked over the last decade, and with it, so have Hermiston School District’s graduating classes.

This year’s graduating class is 332, the largest in Hermiston’s history, and an increase of 91 students from last year. They will walk at 10 a.m. on Saturday, June 10.

Tricia Mooney, Hermiston School District assistant superintendent of human resources, said there were a few reasons for the sudden increase.

“First, our senior class this year is about 40 students larger than last year,” Mooney said via email. “Second, and more exciting, is that our staff have been working really hard with our students this year and we are anticipating an increase in our graduation rate.”

While an increase of that magnitude in just one year is unusual, the overall growth of the district’s student population has been consistent. According to data on the district website, the district has added an average of about 100 students each year since 2005, with 5,609 currently enrolled. The trend is expected to continue through the decade. Hermiston was the second-fastest growing district in the state as of 2015-2016, according to the Oregon Department of Education.

“We’re going to have to continue to look at how to accommodate that,” Mooney said. “Right now the three smallest classes in the district are at the high school. Our 12th grade class was 377 students at the last enrollment report. Next year’s freshman class is 410. If you project down the road, the junior class will be at 382. And the current seventh grade class is at 447.”

Mooney said the growth of the youth population is reflective of changes in the surrounding area.

“When the community grows, the school grows,” she said.

Mooney said the increase in enrollment has had some benefits, including the potential to add new programs.

“The really good aspect is that there are more opportunities for kids,” she said. “The ability to offer different programs is good. I know we’re looking at adding some health occupation programs. We’ve been able to offer a greater range of elective classes.”

One such class is the Columbia Basin Student Home Building Program, which allows students to construct a home that will then be sold.

She said that those additional classes are the areas in which a larger student population allows the district to expand.

“Math requirements, language arts requirements — other schools will have those same offerings,” she said. “What sets us apart is the ability to offer outside of that.”

The programs can offer some incentives for students in smaller districts. Mooney said 134 students transferred into the district this year from other areas while 131 transferred out.

Mooney said there are some challenges that come with the growth, as well.

The biggest challenge for the district will be space. After a failed bond in May that proposed to build a new elementary school and rebuild two others with increased capacity, the district is going to have to take another look at how to handle the still-growing student population. Right now, the solution to the growth has been to use modular classrooms, but district employees have said that will be difficult to maintain as a long-term solution.

“People follow the jobs,” he said. “Unless it’s a resort destination, people don’t typically say, ‘I’m going to move to Hermiston and then find a job.’ It’s really just general economic growth in the region.”

He cited the expansion of several food processing plants and new data centers in the area in the last few years, all of which have created scores of jobs and, as a result, growth in other parts of the community.

Morgan said another reason Hermiston might be seeing more people moving in is its proximity to the Tri-Cities.

“We are absolutely different housing markets,” he said. “But with the correlation in commuting patterns, there’s ways I believe we’re tied to them.”

He added that because most people seeking a place to live based on work are more likely to be at the age where they have school-going children, it’s safe to assume that with this population increase, school enrollment will continue to climb.

“I don’t see it going anywhere in the near future,” he said.