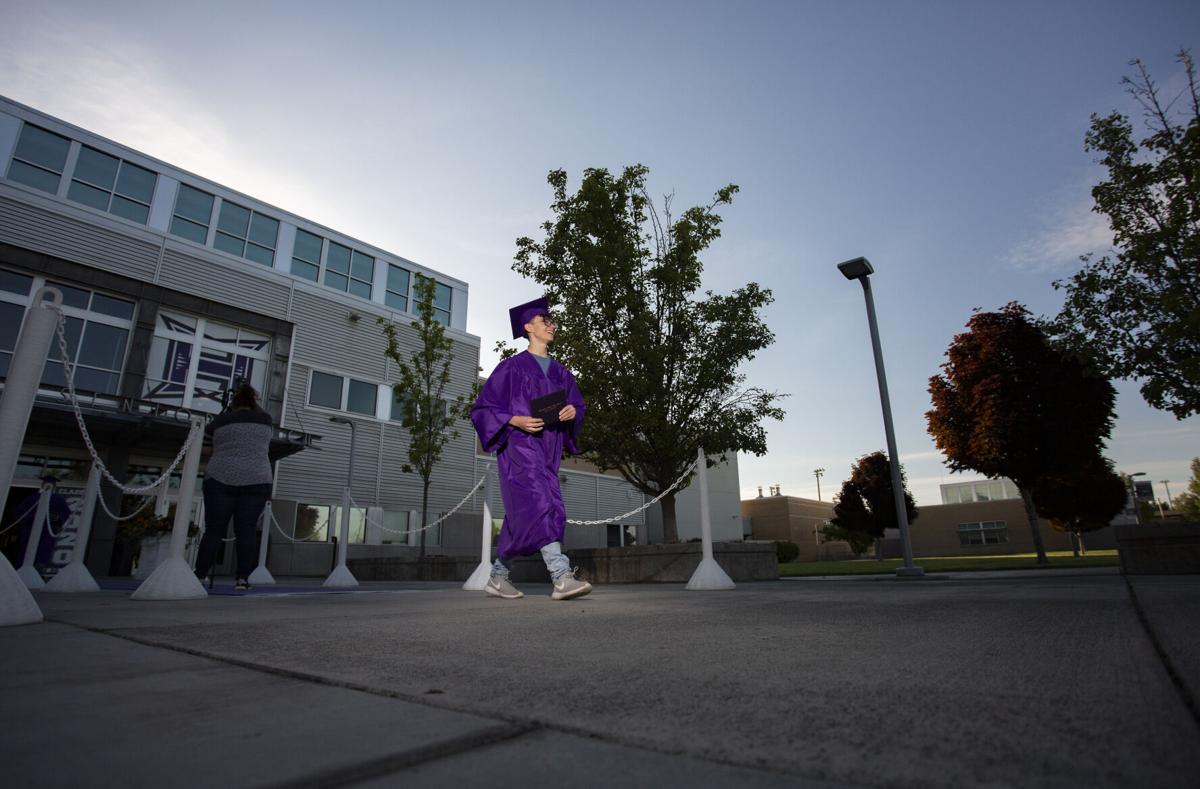 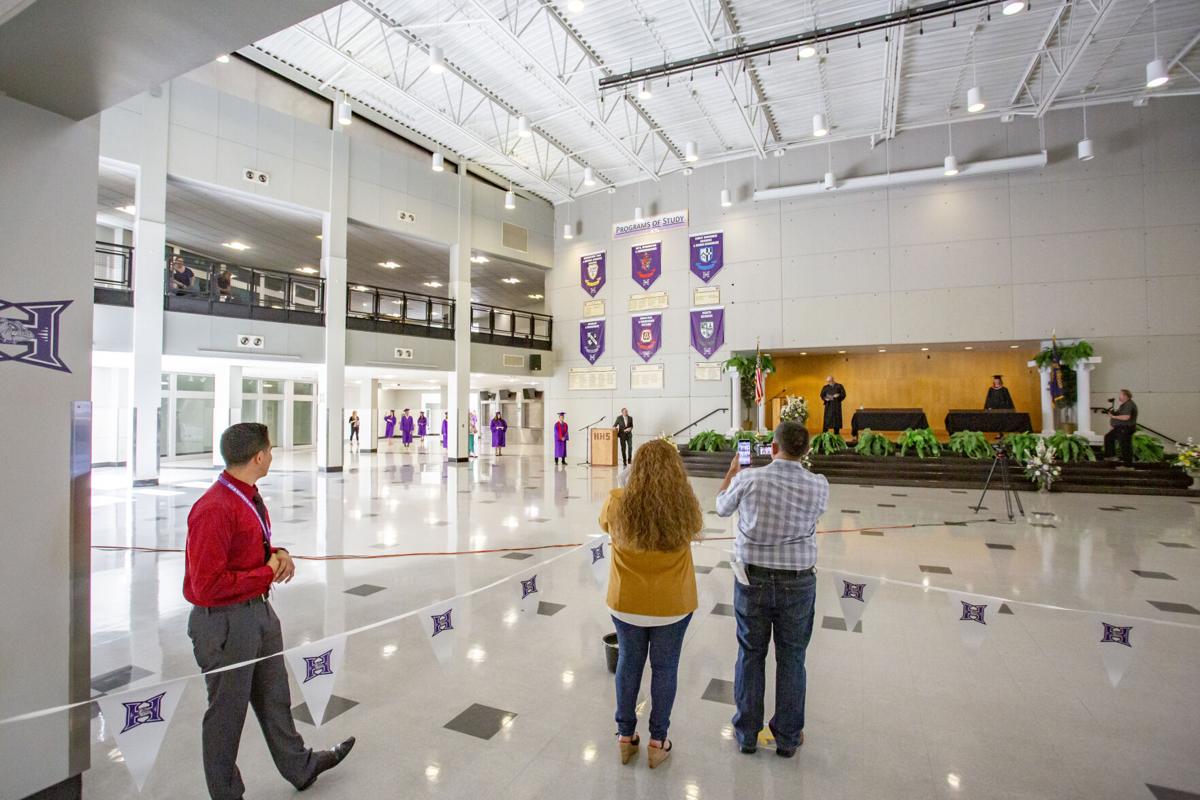 Families stand and take pictures of their graduates during Hermiston High School’s commencement ceremony at the high school on June 4, 2020. 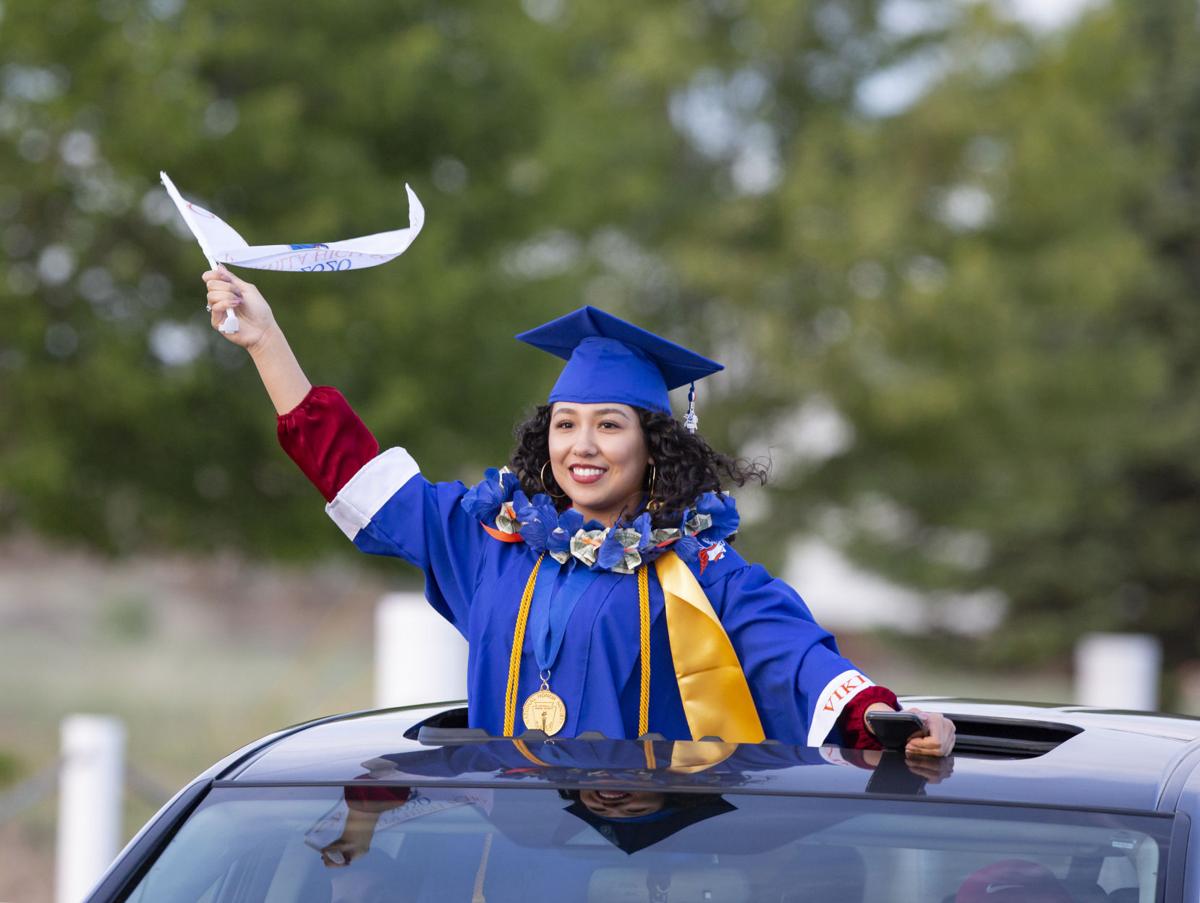 A graduate flies a flag during the parade following Umatilla High School’s commencement ceremony on June 4, 2020.

Families stand and take pictures of their graduates during Hermiston High School’s commencement ceremony at the high school on June 4, 2020.

A graduate flies a flag during the parade following Umatilla High School’s commencement ceremony on June 4, 2020.

Nearly every school district in Umatilla and Morrow counties surpassed the state’s 82.6% graduation rate for the 2019-20 school year, but it was an especially significant moment for the Hermiston School District.

Hermiston’s 83.7% graduation represented a 9-point jump from the year before and a total turnaround from five years ago, when 1 out of 3 Hermiston students didn’t graduate after four years of high school.

Scott Depew, the district’s director of secondary instruction, said Hermiston convened staff to create a 10-point plan to grow Hermiston’s graduation rate. After years of work, the district wasn’t surprised by the 2019-20 result.

“We saw this coming,” he said.

One of the district’s first moves was to shut down its alternative school, the Innovative Learning Center, in 2017. Although Hermiston High School frequently posted respectable graduation numbers, the alternative’s graduation rate was often abysmal.

Depew said consolidating the alternative school into Hermiston High led educators to be creative in the ways they addressed student needs.

Additionally, Hermiston worked on turning more of its GED recipients into diploma holders, which led to more students graduating in four years.

Although the graduation rate grew among all of Hermiston’s various subgroups, the high tide didn’t lift all boats equally.

Hermiston’s graduation rate among English language learners grew modestly from the year before and was a dramatic improvement from its nadir, but only a little more than half of that group graduated on time. Hispanic and Latino students overall still graduated at a lower rate than their white peers.

Depew said those subgroups still had room to grow, but he was encouraged by some recent trends, including more parity between Latino and white students in AP classes.

The region posted strong graduation rates despite schools closing their doors last spring at the beginning of the COVID-19 pandemic. In response, the state relaxed some of its graduation requirements.

Hermiston wasn’t the only school to celebrate its graduation rates.

In a press release, the Morrow County School District noted this was the third year in a row that it had raised its graduation rate by three points, from 88% to 91.6%. The district’s four-year completer rate, which includes students who earned GEDs or extended diplomas, stood at 98.2%.

Umatilla School District Superintendent Heidi Sipe wrote in an email that the class of 2019-20 was a “record setting” class, with more than 12% of seniors earning associate’s degrees by the end of high school. In total, 93.07% of seniors graduated in four years.