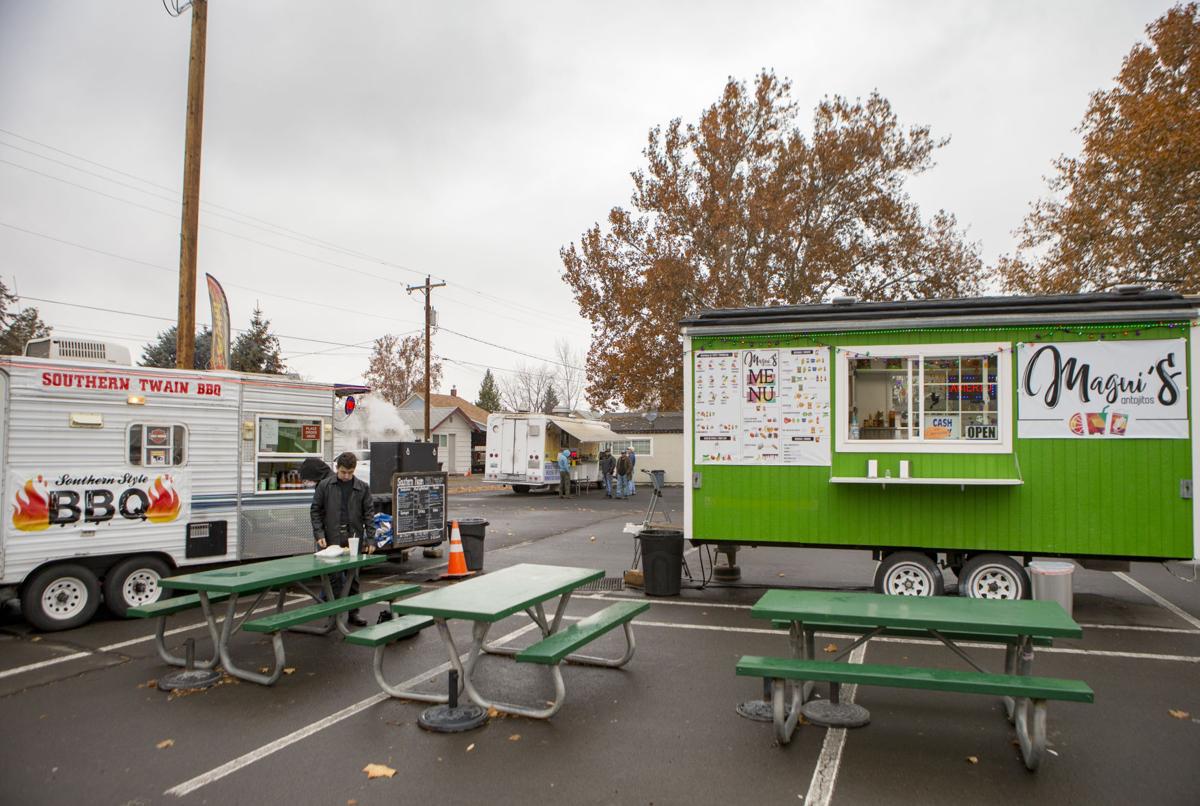 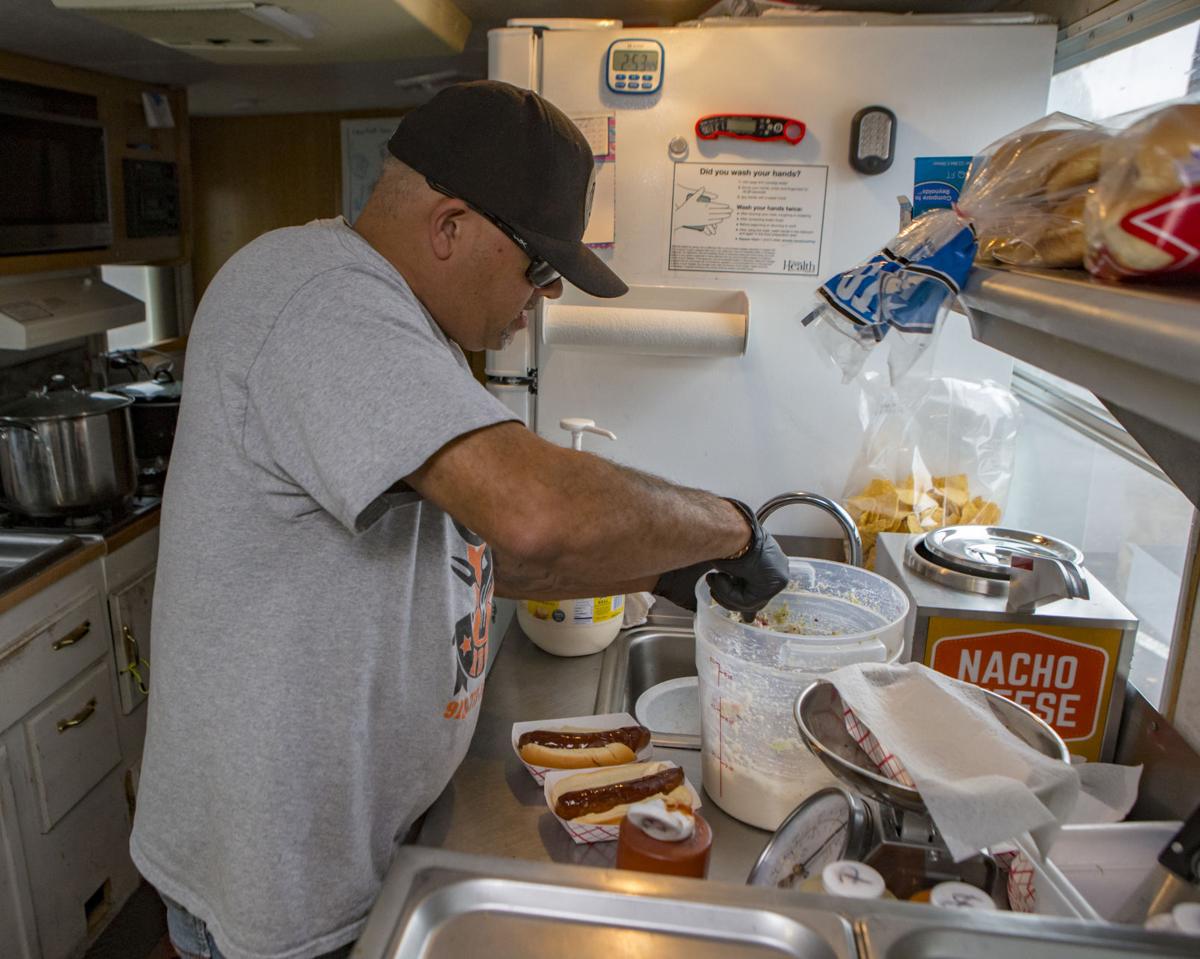 Patrick Hunt scoops coleslaw on a pair of sausages at the Southern Twain BBQ food cart at the food cart pod on the corner of Orchard Avenue and Third Street in Hermiston in November 2019. 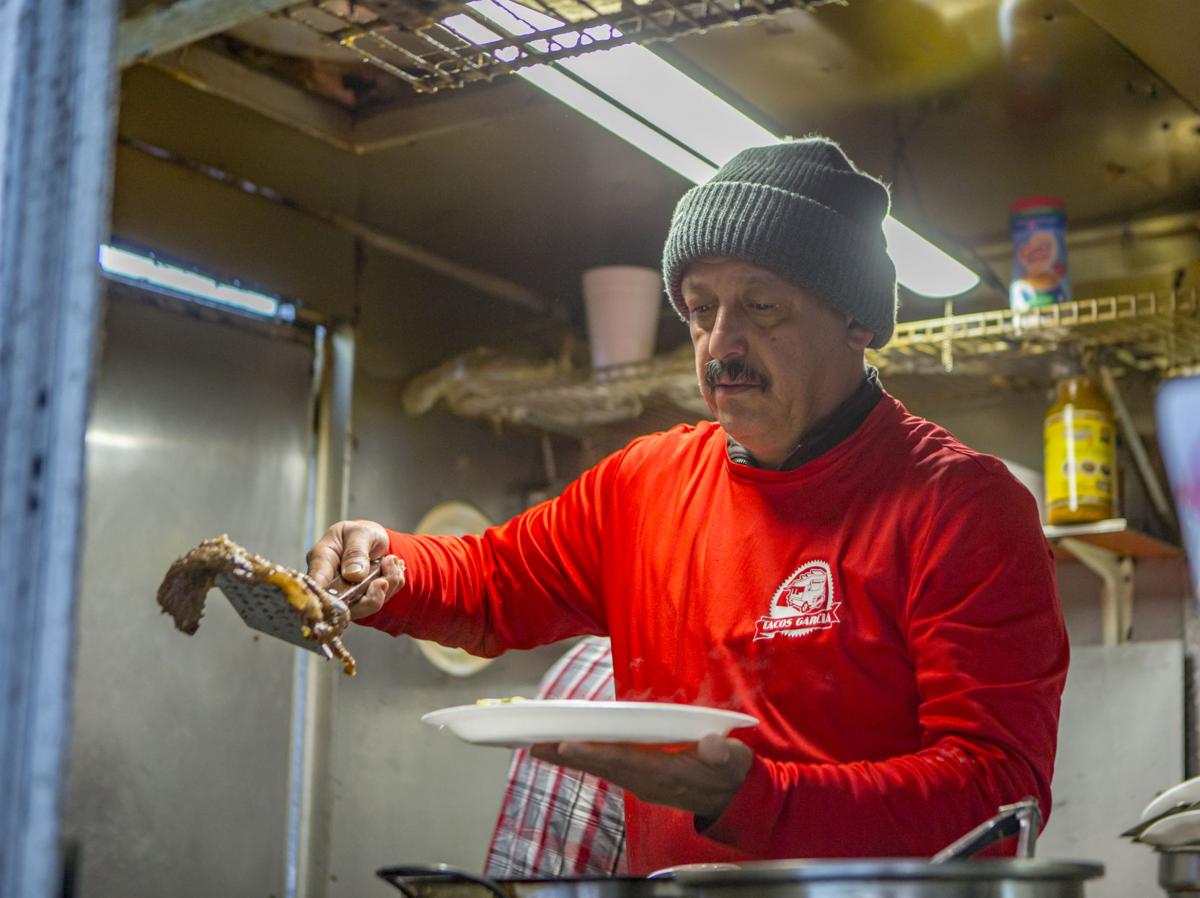 Rigoberto Garcia serves up an order at the Tacos Garcia food truck on the corner of Orchard Avenue and Third Street in Hermiston last summer. The Hermiston City Council will hold a work session on Monday, June 22, on the future of the city's food truck pod.

Patrick Hunt scoops coleslaw on a pair of sausages at the Southern Twain BBQ food cart at the food cart pod on the corner of Orchard Avenue and Third Street in Hermiston in November 2019.

Rigoberto Garcia serves up an order at the Tacos Garcia food truck on the corner of Orchard Avenue and Third Street in Hermiston last summer. The Hermiston City Council will hold a work session on Monday, June 22, on the future of the city's food truck pod.

A pilot program testing Hermiston’s appetite for food trucks is coming to an end.

City planner Clint Spencer said there were some limitations on the opening season, particularly with electrical and wastewater accommodations, but overall it seemed like it was a success.

“From what I heard, from a business standpoint all trucks there did great in terms of sales — better than they were anticipating,” he said.

This summer’s “pod” at the corner of Orchard Avenue and Third Street was a test performed by the city after several residents asked the city council to consider revising their restrictive rules on food trucks, which at the time only allotted three mobile vendor licenses in the city.

Spencer said he will debrief the city council in January, and they can decide from there if they want to continue hosting the food pod on Orchard Avenue, move it somewhere else, or close it for good.

“We’ll look at, ‘Is this an appropriate location? Are there other investments to be made?’” Spencer said.

For now, however, the city plans to close the pod at the end of November.

“Once we start getting into freezing rain and snow in the parking lot it’s not really conducive to it,” Spencer said.

Magui Verdugo, who opened her bright green truck Magui’s Antojitos y Raspados selling shaved ice in August, said she’ll close her truck this week, but plans to return in the spring if that’s still an option.

Patrick Hunt of Southern Twain BBQ was having a particularly busy day on Thursday, with a large special order called in and several customers lined up by noon.

He was one of the original people who appeared before the city council last year, explaining to them that he lived in Hermiston but had to drive his BBQ truck to Pendleton every day because there were no more mobile vendor licenses available.

“I’m ecstatic,” he said, reflecting on his experience this summer. “I’m glad to be back home.”

He said there were some ways the pod could be improved next year, but that was to be expected with a pilot program. There were fewer trucks than expected because some interested vendors said they couldn’t operate without water and sewer or better electricity on site.

Hunt said he was disappointed the city wanted to stop food trucks from parking in the lot over the winter, even though he understood the liability issue, but he hoped to see the food pod come back with either an improved Orchard Avenue location or to try out somewhere new.

“I’ve talked to the soccer people, and they think it would be a great idea for us to be at the Butte,” he said.

Rawli Rodriguez wasn’t making food on site this season, but on Thursday was selling tamales from a van labeled “Granny’s Tamales.” He said previously people had to call and order up the tamales.

“The best thing is that people have a destination now,” he said.

Tacos Garcia is not technically part of the food pod — the truck predates the pod and is parked on private property abutting the city parking lot. But it provides another choice for customers visiting the pod, and owner Rigoberto Garcia said it hasn’t hurt his business to have some more trucks parked nearby.

Monica Todd was selected by the city to run the pilot program. Like Hunt, she said there would have been more vendors on-site if they had been able to offer sewer hookups, but overall she felt it was a success that warranted the return of a food truck pod somewhere in Hermiston next year.

She said she had given Spencer some other feedback as well, including that the city’s rule the trucks must move once a week was unpopular.

“Breaking down everything and moving it once a week is hard on the trailers, and it’s a lot of extra work,” she said.

Still, she said, the food truck pod provided a valuable service to the community and she would be interested in continuing to be involved in some capacity next year.

Before deciding to implement the food truck pod and increase the available licenses for trucks, the city put out a community survey on the subject. Todd said everyone who participated in the survey and voiced support on social media helped make the food pod happen.

“People’s voices were heard,” she said.