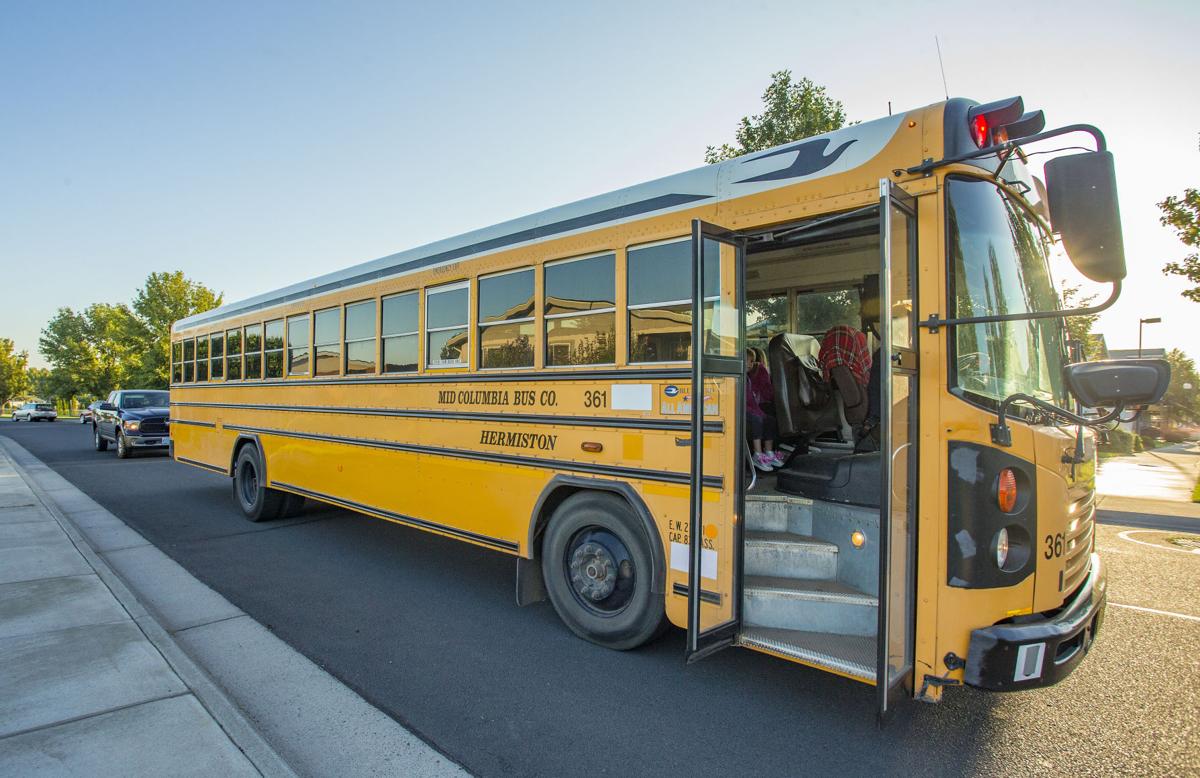 A school bus stops to pick up students on the first day of school in Hermiston on Monday morning. 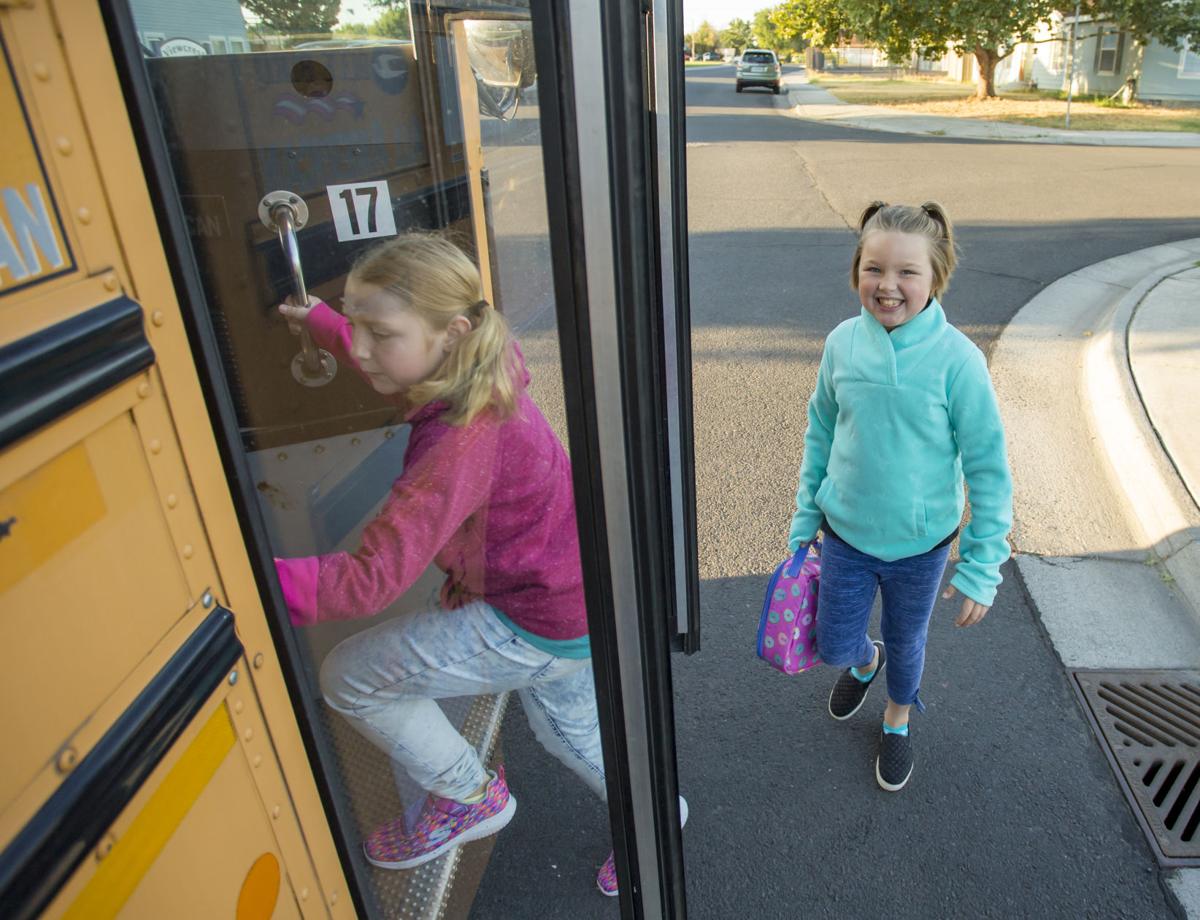 Neely Foster, 8, right, follows her friend onto the school bus for her first day of third grade in Hermiston on Monday morning.

A school bus stops to pick up students on the first day of school in Hermiston on Monday morning.

Neely Foster, 8, right, follows her friend onto the school bus for her first day of third grade in Hermiston on Monday morning.

For thousands of Hermiston students, Monday morning marked the end of summertime fun. For superintendent Tricia Mooney, it was the best day of the year.

Mooney, along with members of the Hermiston School Board, shared their first day of school experiences at a board work session on Monday evening.

Board chair Karen Sherman — a retired middle school teacher herself — headed to Sandstone Middle School on Monday morning to pass out schedules and take part in one of her favorite first day traditions: the opening of the lockers.

She pointed out that for incoming sixth graders, nailing the three number locker combination can be quite trying, particularly on the first day of school.

“The teachers keep getting younger and younger as I get older and older,” Sherman joked.

The district hired almost 50 new teachers this year, some of whom are Hermiston High School graduates returning from college.

On the last weekend before school, while some students were catching up on sleep or relaxing pool-side, kids and staff from Desert View Elementary were out and about, participating in the Hermiston Education Foundation “Fun Run”.

The school took home the “Fleet of Feet” award Saturday for having the highest participation in the run, which was also a school supplies drive.

Monday morning also marked the start of a year of bus riding for many Hermiston students, including Hermiston third-grader Neely Foster, who just couldn’t wait to hop aboard.

Foster, 8, joined many of her peers on the way to West Park Elementary on Monday morning, the start of the school year for the Hermiston School District.

“I love riding the bus,” said Foster, who was priming for her second year of riding.

She said she prefers to sit in either the front or the back, and was ready to get to school so she could show off her donut-themed lunchbox and backpack.

As the bus pulled up to her block, Foster and two of her friends ceased all conversation to dash across the street, bustling with energy on an otherwise dead morning.

According to Stefani Wyant, principal at Rocky Heights Elementary, the bus provides an entirely separate ecosystem from the classroom, complete with its own set of challenges.

“One of the biggest things on the bus is that there is one adult, and that adult is driving. Students sometimes tend to know that they are unsupervised,” Wyant said.

She said that at Rocky Heights, teachers have conversations with students about how to ride the bus properly.

“It’s an opportunity to be kind, include everybody and notice each student,” Wyant said.

Things can get sticky when a parent fails to reregister their child for the coming school year. If a child’s registration is not up to date, their bus route may not be made clear to the bus driver, Wyant said.

Mid Columbia Bus Company — which contracts with the Hermiston School District — runs 28 routes in Hermiston, with buses holding anywhere from 15 to 84 students.

Christie Sutherland, the manager for the company’s Hermiston office, has just stepped into her new position this month. She said the first day of school was a smooth ride for bus drivers.

She noted that when a child isn’t registered with the school and doesn’t know if they’re on the correct bus, the bus driver will first contact the “bus barn” to see if their address is on file with the company.

If the company doesn’t have the child’s address, the bus driver will radio the school to assure the child arrives home safely, whether that means getting dropped off at a stop or heading back to the school for a different bus or parent pickup.

“It can be a process sometimes,” Sutherland said. “But we always figure it out.”

He said they are off to a good start this year, as the company is seeing a lot of employee retention from last year.

“We love having folks come back with us. Most of our drivers take the same route each year. They know their students and their locations,” Moore said.

As parents and students alike gear up for the school year, Moore said there’s one thing that sticks in his mind — safety.

He said students should refrain from running after the bus, and to wait until the bus is at a full stop before hopping aboard.

He also said that drivers need to remember to stop traffic in either direction when a school bus has its stop sign out.

“We don’t want any motoring public to pass when students are getting on that bus,” Moore said.