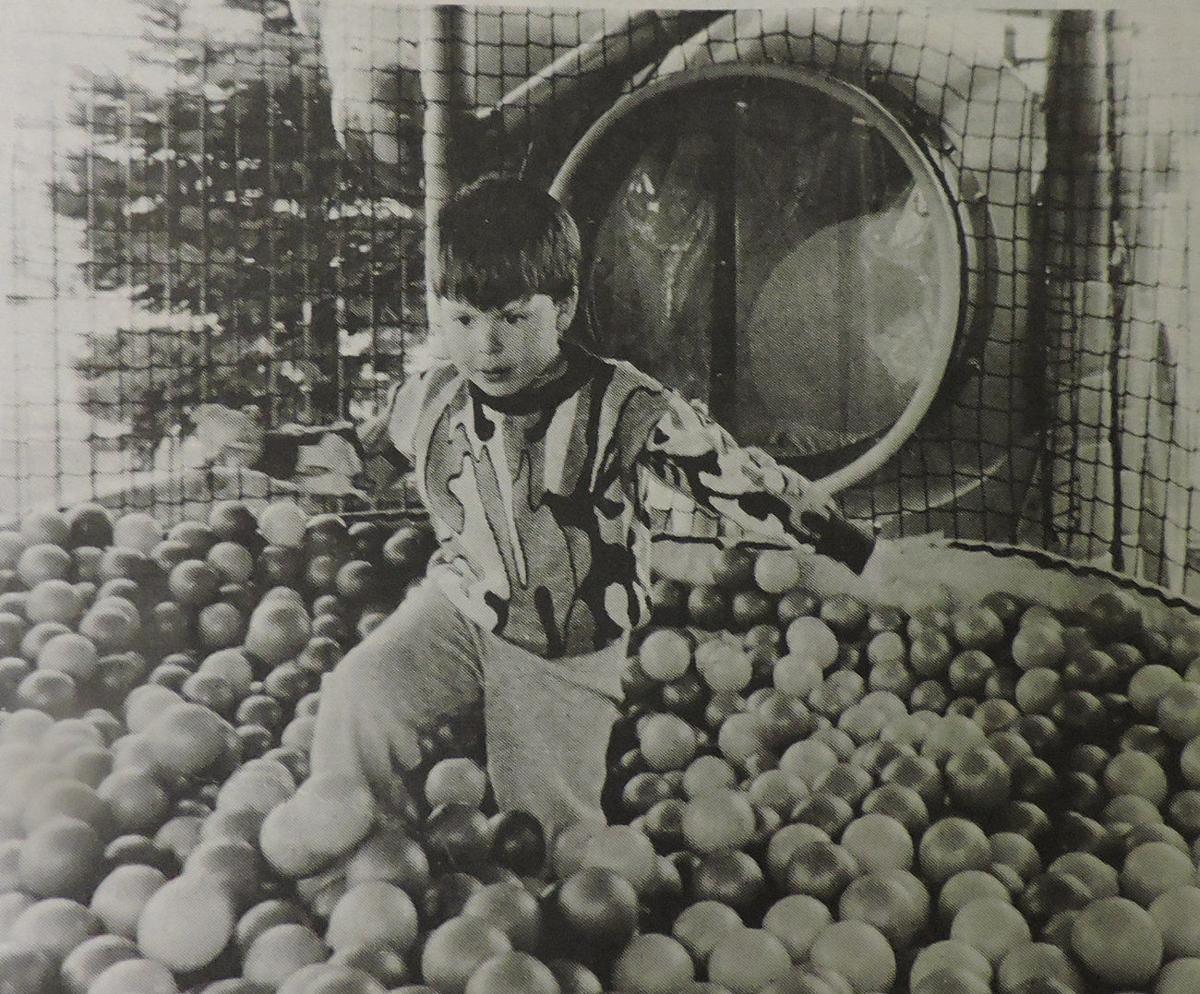 Josh Dakin, 4, leaps into the ball pit at McDonalds' new play area in September 1993, part of a $60,000 playground renovation in the restaurant. The 18-foot tall playground held 30 children and included a maze of tubes. 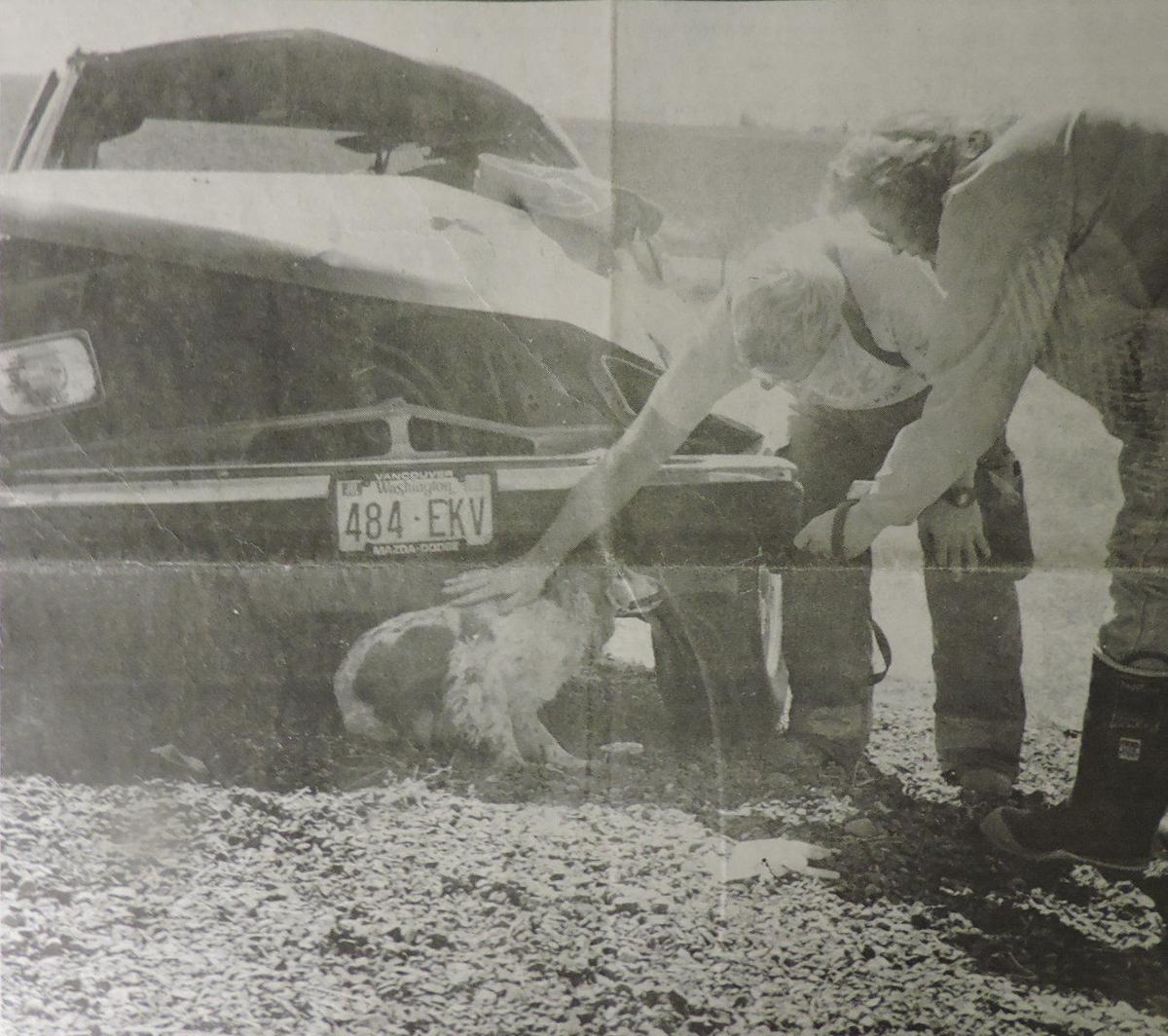 Steve Myron (left) and Tracy Duitsman of the Boardman Fire Department calm a dog, who was a victim of a one-car rollover crash on I-84 in 1993. Two occupants of the car were transported to Good Shepherd Community Hospital with multiple injuries.

Josh Dakin, 4, leaps into the ball pit at McDonalds' new play area in September 1993, part of a $60,000 playground renovation in the restaurant. The 18-foot tall playground held 30 children and included a maze of tubes.

Steve Myron (left) and Tracy Duitsman of the Boardman Fire Department calm a dog, who was a victim of a one-car rollover crash on I-84 in 1993. Two occupants of the car were transported to Good Shepherd Community Hospital with multiple injuries.

The old caboose residing in the park near City Hall has reached the end of the line and will soon have a new home north of the Columbia River. The city had agreed to donate the rail car to the Washington State Railroads Historical Society. The city received the caboose as a gift from the Union Pacific Railroad in 1987. Society members plan to refurbish the caboose and display in near Columbia Center Mall in Richland, according to society spokesman Jim Houston.

“To our knowledge,” Houston said, “This is the last Spokane International caboose in existence.”

Because the car carries so much history, it may ride the rails once again as a companion to a steam locomotive the society is attempting to acquire. The society would operate the train as an excursion. The caboose, Houston said, will be moved “as soon as possible,” meaning about four to six weeks, depending on when the society receives proper permits.

Walt Peters, Port of Umatilla manager, spoke to the Hermiston Kiwanis Club Wednesday at their regular noon luncheon at the CRC and stressed several interesting points regarding port activities. Geographically, says Peters, the port takes in all of Umatilla County with the exception of a small area around Milton-Freewater, and as such is responsible to the entire area within this boundary. The port, Peters says, is competing with neighboring counties and also counties in Washington for industry development along the Columbia River. It is well known that Washington has some tax advantages over Oregon that are encountered when it comes to the actual physical location of an industry. Consequently, it is of primary importance that attention be focused on high-lift irrigation projects. Along this direction, Peters says the port is working toward the development of a food processing industrial park on the 800 acres they own, adjacent to McNary Townsite. The land, rail rates and roads are already available for food processors, says Peters, and sewage disposal of tremendous importance in this type of complex is receiving serious consideration by the Port.

• Umatilla County’s own Marjean Langley made her county and all the people from Oregon proud last Saturday night at Atlantic City, N.J., by placing third in the Miss America pageant. Marjean’s ballet performance in the talent section of the contest, as well as her beauty and warm personality carried her into the magic circle of the five finalists. The Milton-Freewater beauty is the second Umatilla County entry to be named Miss Oregon in the past two years. Christine Beach of Pendleton won the title in 1967.

The residents of this area were given a taste of what the Axis are receiving as a daily fare from our American bombers about 9:45 p.m. Monday. The blast of a bomb about 12 miles southwest of Stanfield was heard at the U.O.D. in Hermiston and many miles around and rattled windows and shook walls of houses. The trials and tribulations of an editor were considerably increased the next morning when reports came in from all sources as to the cause of the tremor. Included among these unfounded rumors were: an earthquake, boiler at the artemisia plant blew up, an igloo at the U.O.D. exploded, a bomb was dropped by mistake near Stanfield, workmen were blasting on road construction, a railroad tanker exploded between here and Stanfield, etc. After weeding out all of these, it was found that it was a bomb dropped according to plans about 12 miles southwest of Stanfield where soldiers were on maneuvers. Just more army training for the boys in the service. However, it created quite a bit of excitement here.

Conforming to his annual custom of being host to a dinner party at his farm home several miles east of this city, J.H. Reid, erstwhile Hermiston banker, but of late years an energetic and prosperous rancher of the Columbia district, entertained even more elaborately than of yore at his fine ranch home last Sunday afternoon. There were eleven guests that partook of the hospitality of Mr. Reid, and among them were some of the real old-timers of the project, with a sprinkling of later arrivals. Heading the list was Col. J.F. McNaught, who proved to be at his best that day as a recounter of early-day history, following whom came J.T. Hinkle, E.P. Dodd, C.E. Baker, Thomas Campbell, H.T. Fraser, Wm. Warner, J.H. Young, A.L. Larson, F.A. Chezik and M.D. O’Connell. When this caravan had arrived at 12:30, Mr. Reid spent an hour with them looking over the ranch, during which time they were shown the interior of his large modern barn, patches of sweet and field corn that are equal of any in the project, and also an orchard free from weeds, with every tree symmetrically shaped. The chickens and the horses and cattle denoted the fruits of being well cared for, and a large haystack showed the result of the alfalfa harvest up to date.